Finland is set to have the world’s youngest prime minister after 34-year-old Sanna Marin was chosen as the new leader of the Social Democratic party.

The Helsinki-born former transport minister will be the country’s third female government leader, after she narrowly beat rival Antti Lindtman to take over the government’s top post from incumbent Antti Rinne.

Ms Marin, an MP since 2015, has previously been the party’s vice chairwoman and will become the world’s youngest sitting prime minister.

The mother-of-one – who shares 22-month-old daughter Emma Amalia Marin with husband Markus Räikköne – will lead a centre-left coalition with four other parties which are all headed by women, three of which are under 35. 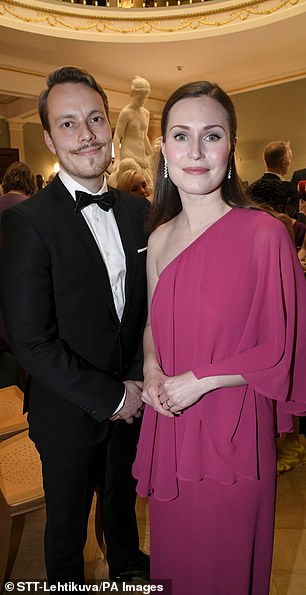 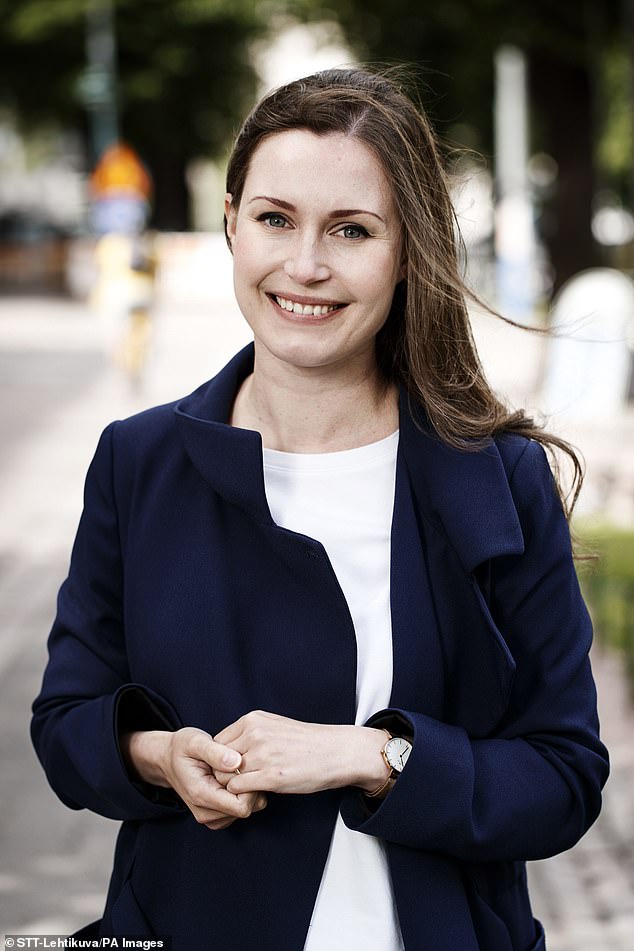 According to Finish media, Ms Marin was brought up in a ‘rainbow family’ by her mother and her female partner.

She lived in Espoo and Pirkkala before moving to Tampere, where she became the first person in her family to go to university.

Ms Marin is certainly a politician who will appeal to the millennial ‘Instagram generation’. During her rise to success in the political field she has charted her pregnancy journey on her Instagram page, sharing selfies of her pregnancy bump and even a candid breastfeeding shot.

She’s also shared poolside shots from a romantic holiday to Italy in July 2017, during which she and Markus travelled to Portofino, Rome, Sardinia and Veneto, and snaps from Pride events, where she showed her support for same-sex unions.

Ms Marin is also no stranger to the infamous political leader ‘eating’ shot – though she navigates it much better than the likes of Ed Miliband, sharing fun photos of her tucking into ice cream and candy floss. 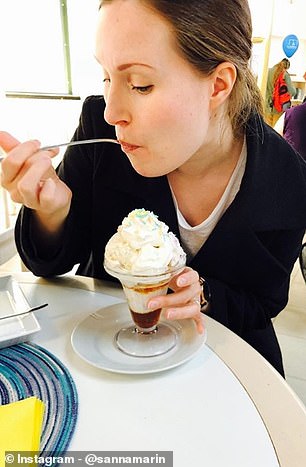 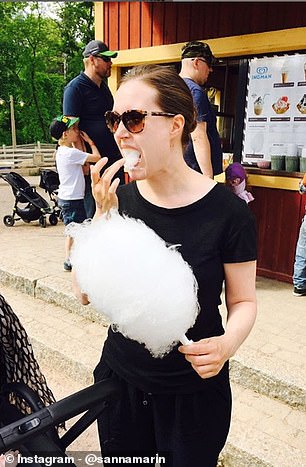 Ms Marin is no stranger to the infamous political leader ‘eating’ shot – though navigates it much better than the likes of Ed Miliband, sharing snaps of her tucking into ice cream and candy floss 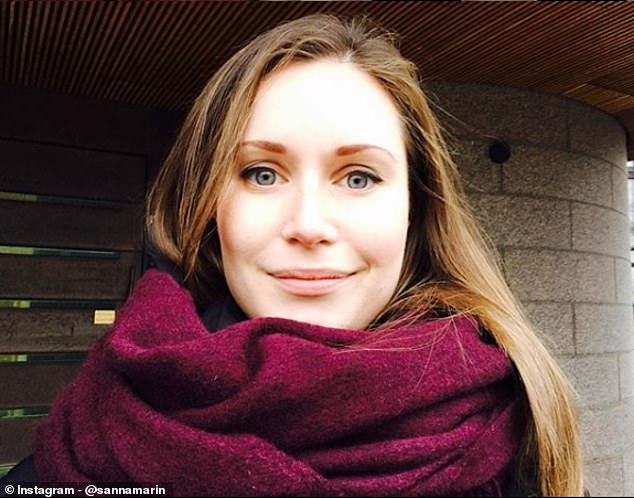 Speaking after her appointment, Ms Marin said she has ‘never thought’ about her age or gender 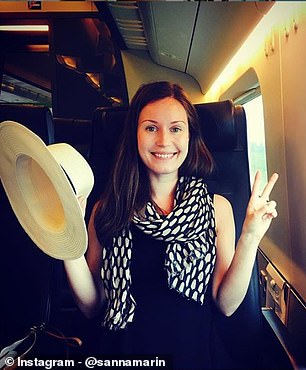 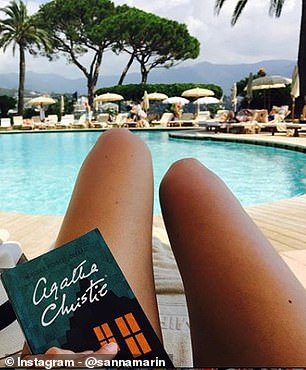 Ms Marin was born in Helsinki and lived in Espoo and Pirkkala, before moving to Tampere, where she became the first person in her family to go to university. Pictured on a holiday to Italy in July 2017

In 2015 Ms Marin told the Menaiset website that as a child she felt ‘invisible’ because she was unable to talk openly about her unconventional family.

‘The silence was the hardest,’ she said. ‘Invisibility caused a feeling of incompetence. We were not recognised as a true family or equal with others. But I wasn’t much bullied. Even when I was little, I was very candid and stubborn. I wouldn’t have taken anything easy.’

She also admitted that she never expected to get into politics, telling the publication: ‘When I was in high school, I felt that the people who make politics are quite different and come from different backgrounds than I am. At that time, I didn’t think it was possible to get involved myself.’

Ms Marin, who spent her teenage years working in a bakery, added that her mother has always been very supportive and made her believe she could do anything she wanted. 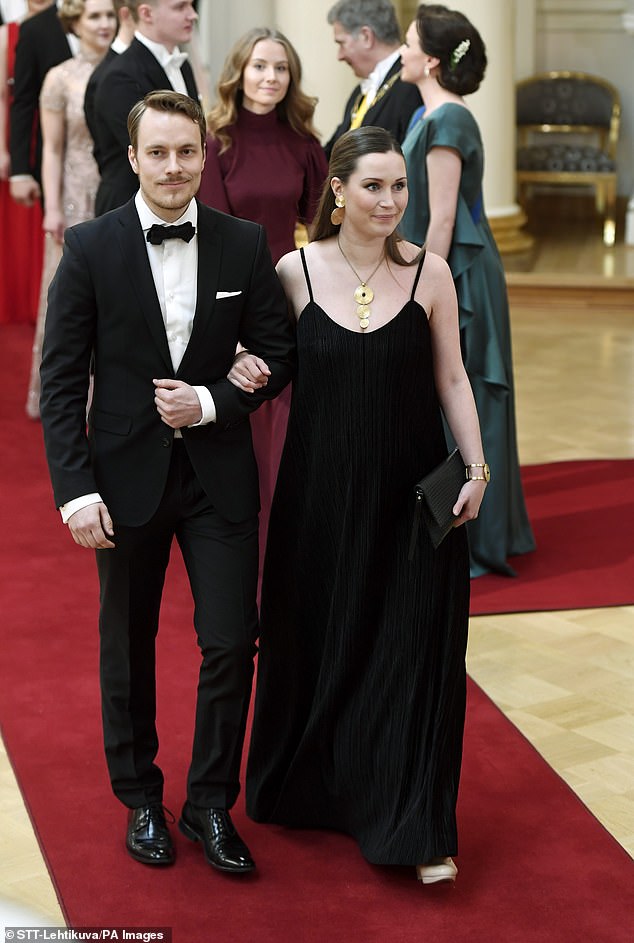 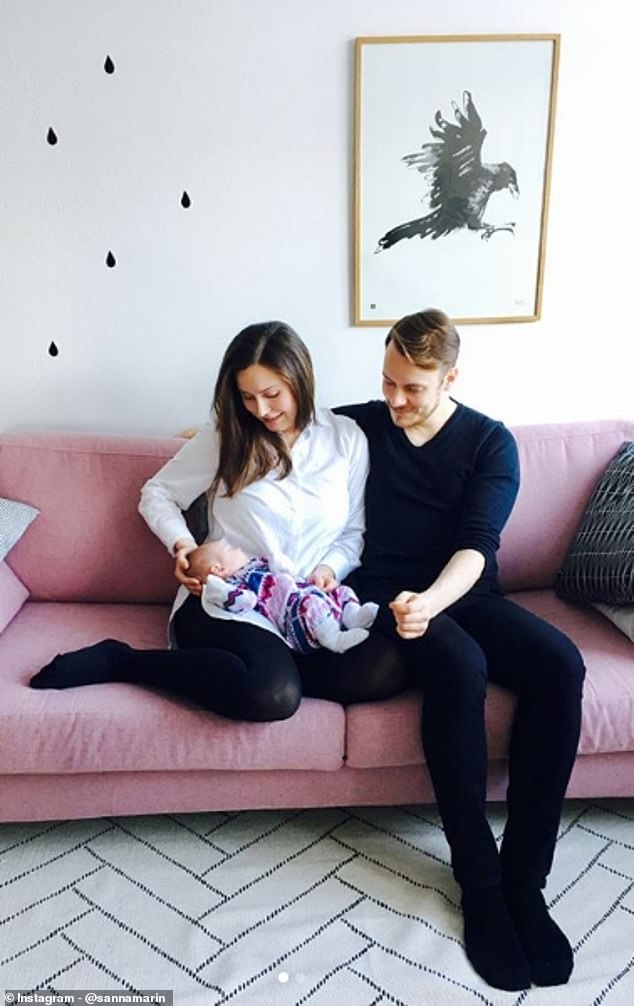 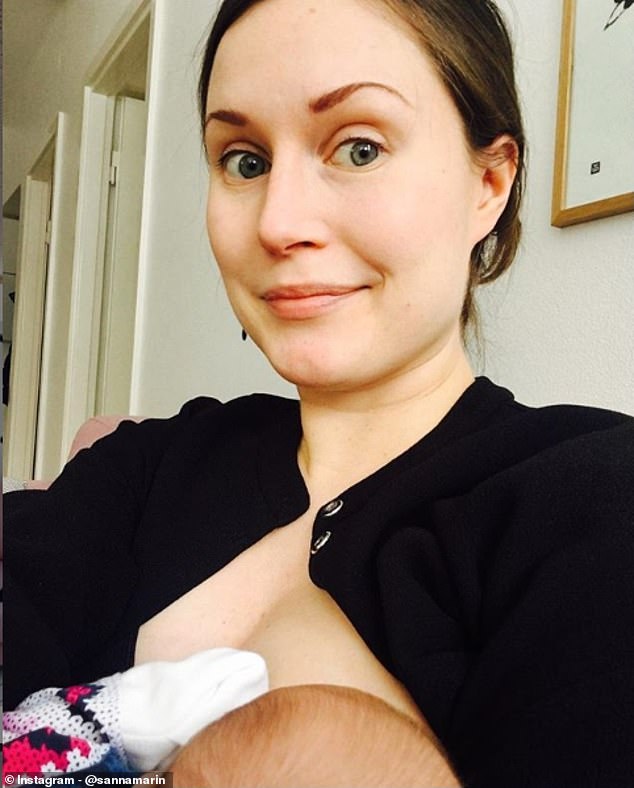 The mother-of-one also shared a candid photo of her breastfeeding Emma in February last year, admitting her little one was so hungry that she and her husband barely got any sleep

Speaking after her appointment, Ms Marin said she has ‘never thought’ about her age or gender, adding: ‘I think of the reasons I got into politics and those things for which we have won the trust of the electorate.’

She told reporters: ‘We have a lot of work to do to rebuild trust.’

The mother-of-one was elected to the City Council of Tampere in 2012 and became its chairperson in 2013 – a role she held until 2017, when she was re-elected.

In 2014 she was elected second deputy chairperson of the Social Democratic Party and in 2015 she was voted into the Parliament of Finland from the electoral district of Pirkanmaa. 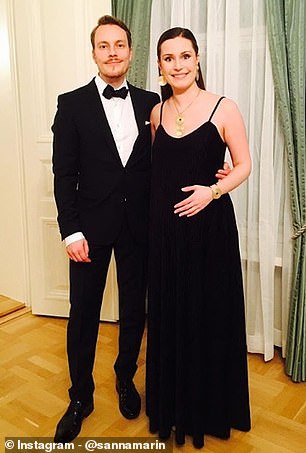 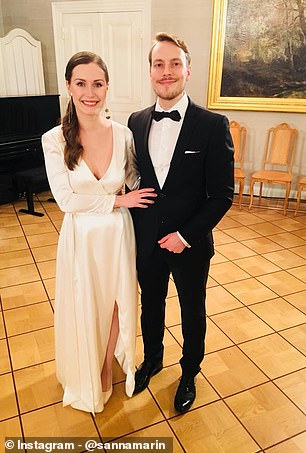 Ms Marin and her husband, pictured together during her pregnancy (left) and at a Finnish Independence Day ball last year (right), have been together for over five years. She admitted she never expected to get into politics when she was growing up 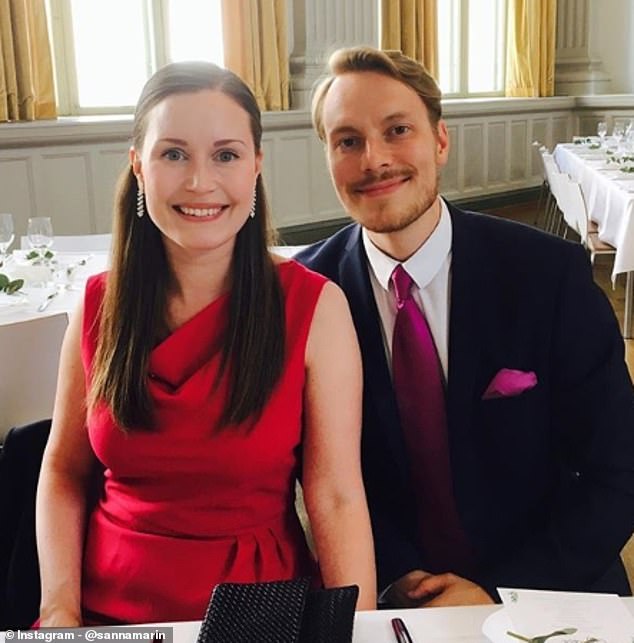 Ms Marin, who spent her teenage years working in a bakery, said her mother has always been very supportive and made her believe she could do anything she wanted. Pictured with her husband

She became the Minister of Transport and Communications in June earlier this year.

Finland, which has a population of 5.5 million, currently holds the European Union’s rotating presidency until the end of the year. MPs are likely to approve the appointment of Ms Marin and her new government quickly so she can represent Finland at next week’s EU leaders’ summit in Brussels. 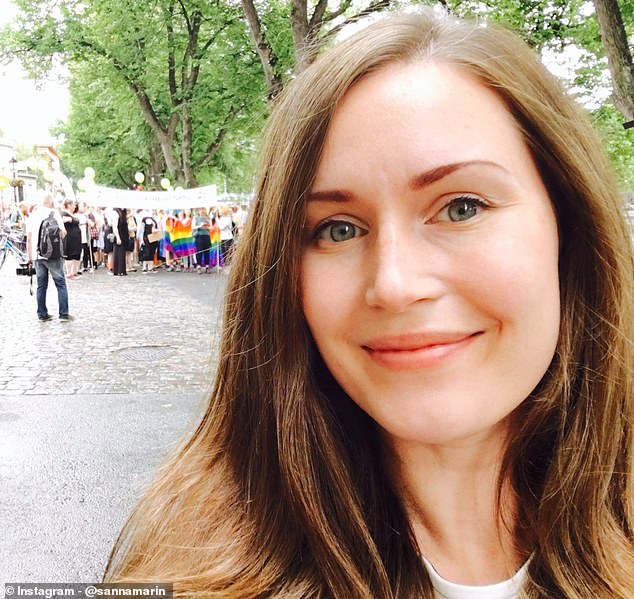 According to Finish media, Ms Marin was brought up in a ‘rainbow family’ by her mother and her female partner 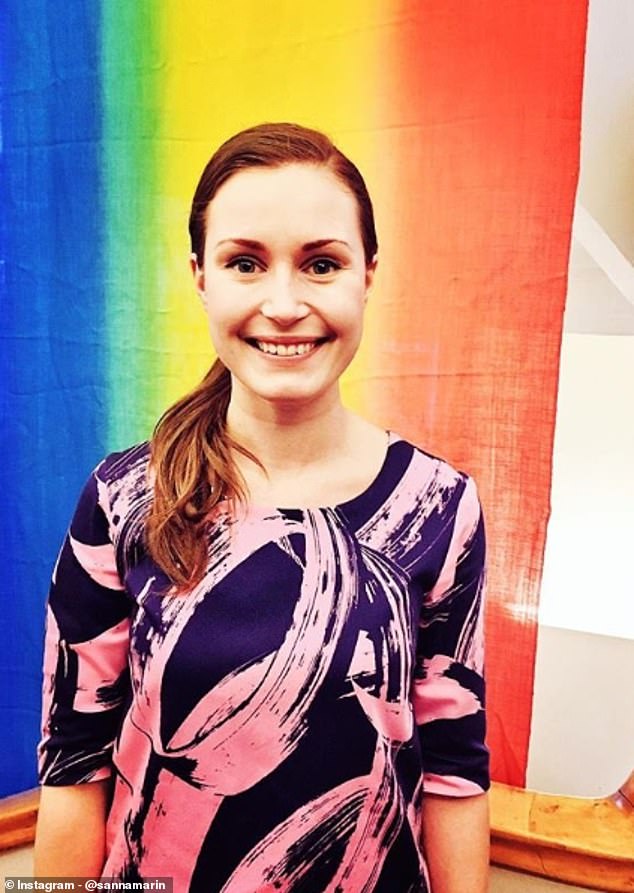 During her rise to success in the political field, Ms Marin has regularly attended Pride events – sharing photos from Turku, a city on the southwest coast of Finland (pictured)

Rinne stepped down on Tuesday after a key coalition partner, the Center Party, withdrew its support, citing lack of trust.

The Center Party also criticised Rinne’s leadership skills prior to a two-week strike by the country’s state-owned postal service Posti in November that spread to other industries, including the national flag carrier Finnair.

Rinne’s resignation prompted the formal resignation of a coalition of the Social Democrats and the Center Party and three junior partners: the Greens, the Left Alliance and the Swedish People’s Party of Finland. 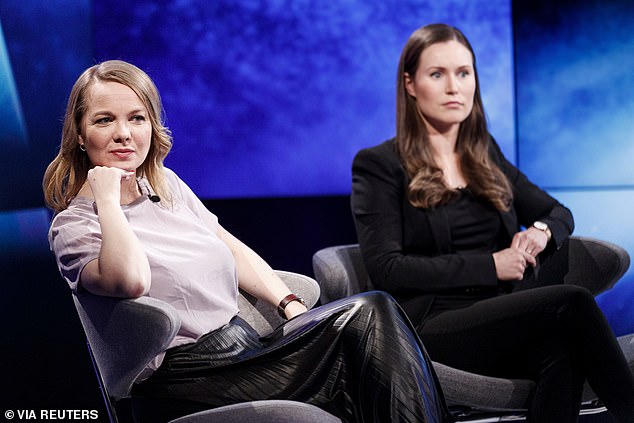 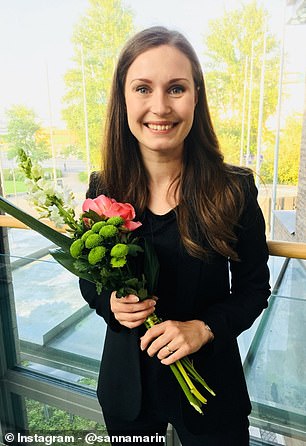 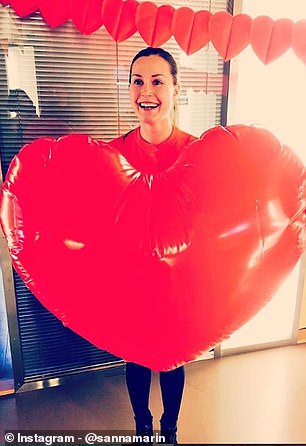 The transport minister was picked by her Social Democratic party after its leader, Antti Rinne, quit as prime minister and will be sworn in this week

On Sunday, Social Democrats and the four other coalition parties said they are committed to the government program agreed upon after the April election and will continue in Marin’s new government. The new government will still have a comfortable majority of 117 seats at the 200-seat Eduskunta, or Parliament.

He also plans to stay on as the Social Democrats’ chairman until a party congress next summer. 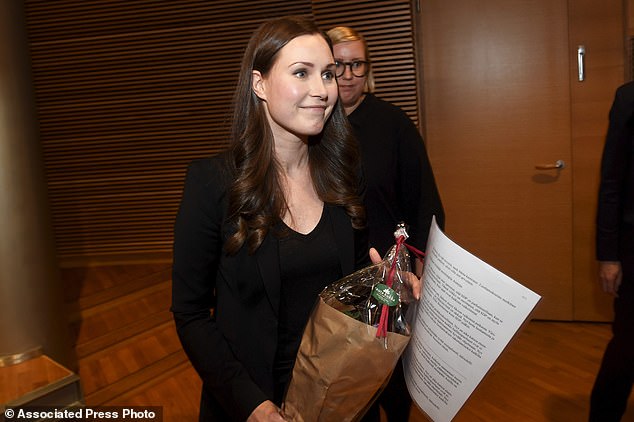 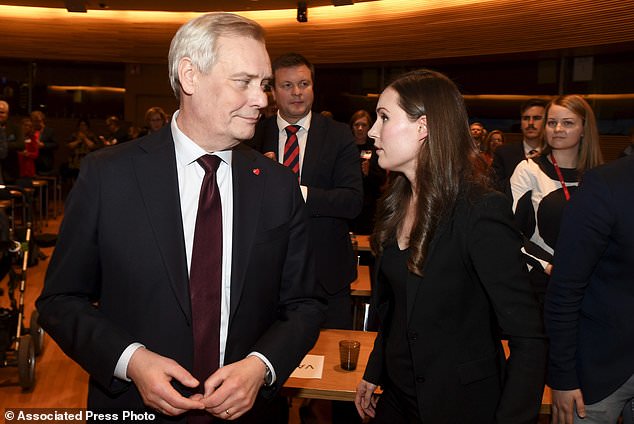