A quarter of department stores have shut in less than a decade as Britain’s high streets struggle to compete with the internet.

It comes as once-dominant House of Fraser and Debenhams consider restructuring their businesses as they try to cope with rising rents and falling revenues.

Many department stores have more floor space than they need and are fighting to keep up with a boom in internet shopping dominated by online-only retailers such as Asos and Amazon.

Sir Philip Green’s BHS crashed into administration in 2016, forcing the closure of more than 160 stores after 88 years.

It has since relaunched as an online business which is popular with shoppers looking for lighting, women’s pyjamas and home accessories like candles and photo frames.

Liam Brooke, co-founder of finance company Lendy, which compiled the data, said: ‘The falling number of department stores shows they have borne much of the brunt of the shift towards internet shopping.’

The number of shops on the High Street has also fallen during the period but at a slower pace. About 4,000 shops closed in less than a decade, taking the total to 403,000. 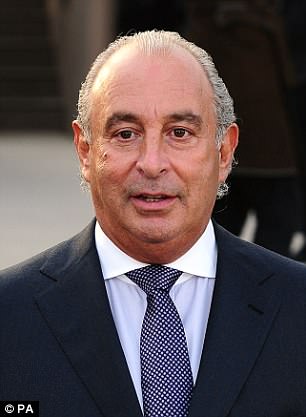 Sir Philip Green’s BHS crashed into administration in 2016, forcing the closure of more than 160 stores after 88 years

However, the number looks set to grow as House of Fraser plans to close around one in three of its least successful stores. Debenhams is planning to downsize at least 30 shops as it struggles with falling sales and profits.

House of Fraser has 59 stores in the UK while Debenhams has 183.

Lendy’s data does not include hundreds of store closures which have already taken place this year. In April Toys R Us shut its remaining 75 outlets and electronics chain Maplin went into administration.

Meanwhile, Marks & Spencer is to close 100 stores by 2022 and grow its online business. Carpetright, Mothercare and New Look are also shutting shops.

Yesterday WH Smith was voted the worst retailer on the high street in a survey of more than 10,000 shoppers.