It is a far cry from the slick ads and flawless photography of Apple’s latest products.

Bonhams is set to auction an ad for Apple’s first machine, the Apple-1.

Handwritten by Steve Jobs, it offers a bare circuit board for the machine and a manual for $75, which Jobs declares ‘a real deal’.

An instead of slick marketing images, there are Polaroids of bare circuits boards.

Handwritten by Steve Jobs, the note offers a bare circuit board for the machine and a manual for $75, which Jobs declares ‘a real deal’. An instead of slick marketing images, there are Polaroids of bare circuits boards.

Jobs touts the many features of the unit such as the ‘full crt terminal’ (screen).

In 1976, when most other hobbyist computers were programmed using a bank of flashing LEDs on the front panel, incorporating a screen was revolutionary.

The machine being offered is believed to be one of the second batch made.

The first 50 boards were sold to the Byte Shop,  and Jobs hoped to continue the momentum for the firm by marketing bare Apple-1 printed circuit boards (PCBs) to friends and acquaintances. 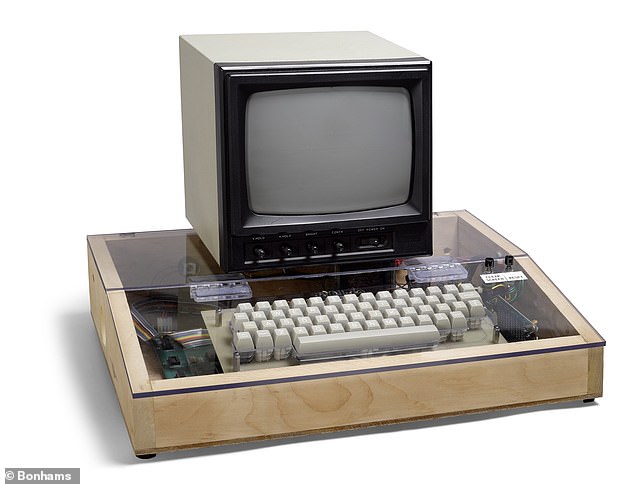 The December 5, Bonhams sale of History of Science and Technology also includes a working Apple-1 computer gifted by Steve Jobs to the current owner (estimate: $250,000-350,000) 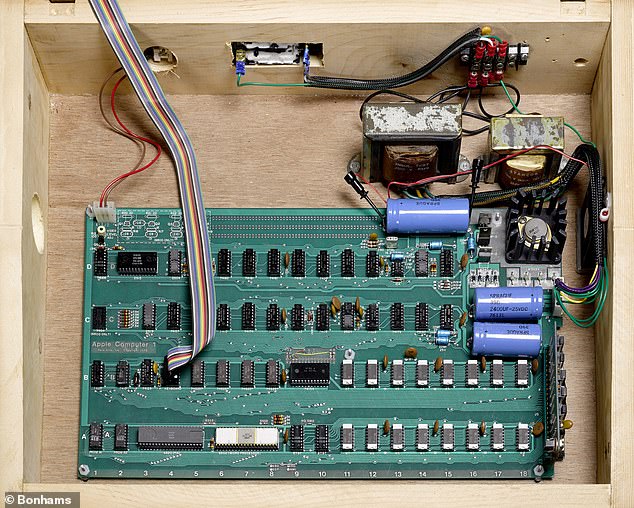 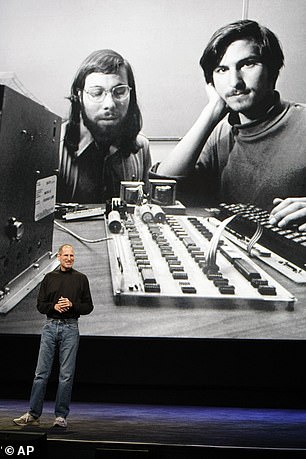 Jobs stands in front of a photo of himself, right, and Steve Wozniak, left, with an Apple-1

‘The present manuscript is essentially a specification sheet for the computer and was given to the consignor during a visit to Jobs’ garage,’ Bonhams said.

Jobs states ‘basic on the way (ROM),’ which never materialized for the Apple-1, but did the following year for the Apple II.

The manuscript is accompanied by two Polaroid photographs.

The first shows an Apple-1 on a wooden table with a keyboard, monitor and power supply partially visible in the right edge.

The other Polaroid shows the Apple-1 screen with ‘Apple Computer Co. at the bottom and Jobs’ address and phone number for contact.

Jobs has written on the lower margin ’40×24 OR 26 lines / fuzzy because camera wiggled.’ 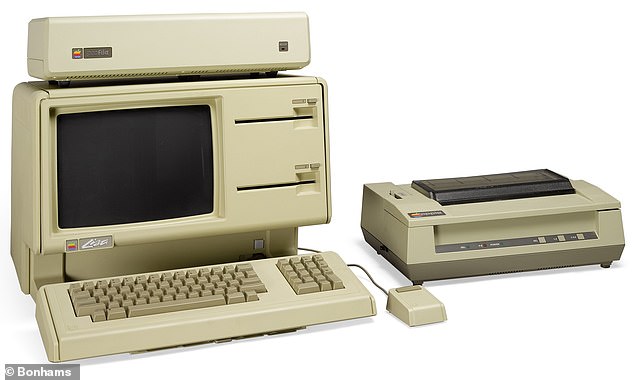 A working Apple Lisa, the computer that brought the graphical user interface (GUI) and the mouse to the wider marketplace, is also up for grabs (estimate: $30,000-50,000).

Jobs also includes his contact information at the bottom of the letter, giving his parent’s address.

Apple famously began in the garage attached to the house, where many of the original Apple-1s were assembled in a garage by jobs and Apple co-founder steve Wozniak.

The December 5, Bonhams sale of History of Science and Technology also includes  a working Apple-1 computer gifted by Steve Jobs to the current owner (estimate: $250,000-350,000) as well as a working Apple Lisa, the computer that brought the graphical user interface (GUI) and the mouse to the wider marketplace (estimate: $30,000-50,000).

WHAT IS THE APPLE 1?

Apple co-founders Steve Jobs and Steve Wozniak created the Apple-1 personal computer in 1976 and presented it at a computer club in Palo Alto.

However, there were few takers at the time.

Paul Terrell, owner of a retail chain called Byte Shop, placed an order for 50 of the machines and sold them for $666.66 (£420) retail – once Mr Wozniak and Mr Jobs agreed to assemble the circuit boards rather than offer them as kits.

The usual price tag is believed to have been chosen because Mr Wozniak liked repeating digits.

Wozniak and Jobs hand-crafted 150 more Apple-1 machines and sold them to friends and other vendors.

Fewer than 50 original Apple-1s are believed to have survived, with only eight known to be in working condition.

The Apple 1 did not have a keyboard or monitor, meaning users had to supply their own before they were able to use the computer.

It also had a tiny 8K memory — minuscule by today’s standards.

Jobs sent them direct to buyers from the garage of his parents’ house.

The first Apple computer helped kick-start a technological revolution that brought affordable computers out of science labs and into people’s homes.

The Apple II was introduced in April 1977 with an integrated keyboard, sound, a plastic case, and eight internal expansion slots.

By the time it was discontinued in October 1977, around 200 Apple 1s had been produced.

It is thought that only 30 to 50 of the computers still exist today.