However, shortages continue to plague the transplant community, with deficits far out pacing donations for the last 25 years.

Incremental improvements seen in the last several years are due in part to changes in standards giving recipients the option to consent to ‘higher risk’ organs, including those from people who died of opioid overdoses.

Organ donations were up 3.1 percent in 2017, an increase fueled in part by the opioid epidemic

Transplants have been performed in the US since 1954, when a donor kidney was placed in an American man for the first time.

Yet, in spite of years of practice, the procedure remains tricky and time sensitive.

In order for a person’s organ to be viable after death, oxygen-rich blood has to continue to flow to that part of their body, but only about three in every 1,000 people in the US die in a way that makes this possible, according to the US Department of Health and Human Services.

The list’s length peaked in 2015, but as of August of last year, 116,000 Americans were waiting for transplants – nearly 10 times the number of organs donated over the course of the year.

As a result, each day, 20 people on transplant lists die before an organ becomes available.

Americans tend to be in favor of organ donation as a matter of policy, but only about half of the population is registered to give their own after death.

In response, there has been a push in recent years to investigate just where, exactly, the bar is to make an organ viable, and even when death occurs.

On the heals of this research, the United Network of Organ Sharing (UNOS) slackened its clinical requirements.

In 2017, more donations were accepted from people who were not yet brain dead, but whose circulatory systems had stopped functioning, had died from drug overdoses, were over 50 or were at risk for blood diseases.

‘That includes some donors that are, unfortunately, dying in the opioid crisis these days,’ says Dr David Klassen, chief medical officer for UNOS.

After careful screening for any infection, ‘those donors are excellent donors, [in part because] they are often younger, which is good from an organ donor perspective,’ he says.

Transplant centers must inform potential recipients of all potential risks under guidelines introduced in 2013, but now a broader range of organs can be considered.

‘As we increase our understanding of medical criteria that contribute to successful transplantation, donation and transplantation professionals have been able to use organs from a wider set of potential donors,’ said Dr Klassen. 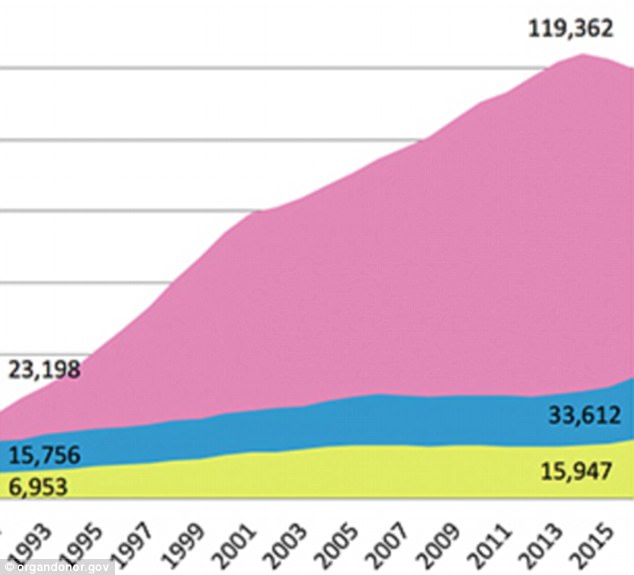 Organ shortages have decreased slightly since the peak in 2015, but there are still 10 times as many people on the transplant waiting list as gave organs last year

‘In doing so, we continue to carefully balance the opportunity for transplantation with a commitment to maintaining patient safety,’ he added.

Still, in 2017, the same year that organ donations broke 10,000, shortages had increased by 20 percent over the rates from five years prior.

Currently, organ donors have to opt in when they get their driver’s licenses,

A 2012 Stanford University study found that most Americans saw organ donation as extremely charitable, likening the act more closely to giving 50 percent of an inheritance to charity than five percent.

The researchers recommended that the ‘opt in’ approach be exchanged for an active decision to opt out of organ donation, a method of ‘presumed consent’ that hs been adopted by 25 European countries.

States including Connecticut and Texas have proposed legislation that would make organ donation the default status of their citizens.

Currently, organ donors have to opt in when they get their driver’s licenses, but so far the no legislative changes have been made.