A review of Belfast’s Grand Central Hotel, where the warm welcome starts with whiskey-laced porridge

For half a century, Samson and Goliath have stood above the Belfast skyline, dominating the views across the River Lagan and beyond.

One of the best and most comfortable places to look out over the giant cranes of the Harland and Wolff shipyard – where the ill-fated Titanic and her equally unlucky sister ship, the Britannic, were built – is the Observatory bar at the top of the city centre Grand Central Hotel, which opened in 2018.

The original Grand Central opened in 1892 on Royal Avenue and was known as Belfast’s finest hotel. It was frequented by a host of statesmen and musicians and hosted the launch party for the Titanic (it was only a short distance from the Europa hotel – which had the unfortunate reputation as the most bombed hotel in Europe).

The Grand Central in Belfast has more than 300 luxurious rooms. Some have en suites with amazing views

However, with the troubles, the Grand Central was turned into an army barracks and later demolished.

Belfast has thankfully changed. There’s now a thriving bar and restaurant scene and, of course, hotels like the Grand Central, which is an ultra-modern version of the Victorian hotel with the same name.

It’s located in Belfast’s Linen Quarter and sports a large Seahorse motif, which could be found on the original hotel. Newly arrived guests will find a Seahorse chocolate on their pillows. 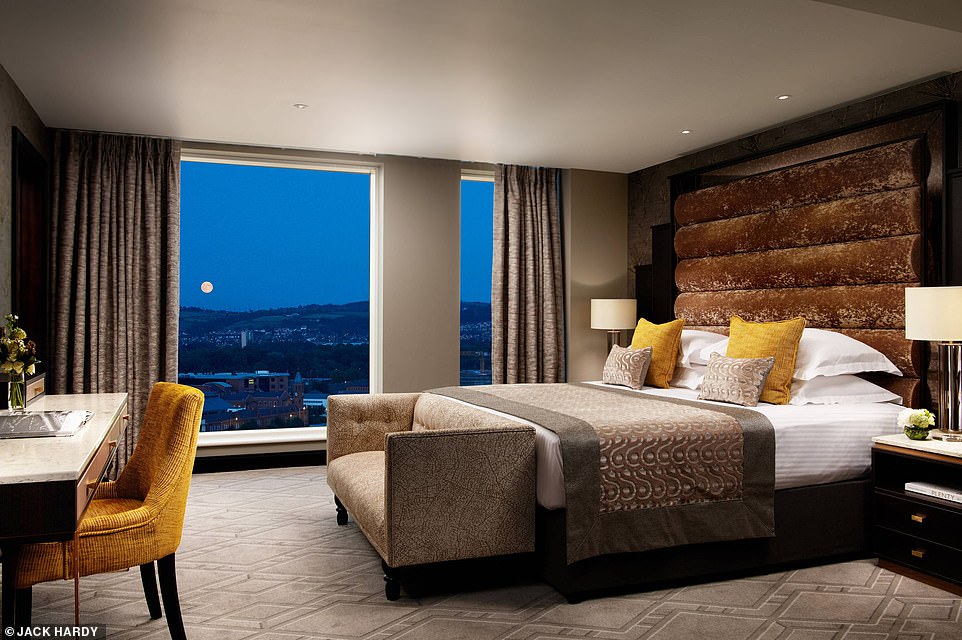 The rooms in the four-star hotel are ‘exquisitely furnished’ and are insulated from bustling streets below, Darren says

It has more than 300 luxurious rooms and despite the city centre location, there is no noise from the bustling streets below.

The rooms in the four-star hotel are exquisitely furnished and the further up the landmark building you go, the better the view, of course.

The hotel is owned by Hastings Hotels, which is an independent group with some of the finest luxury properties in the region.

That local connection is clearly evident when looking through the menu, as much of the produce is locally sourced. Even the most basic meal at the Grand Central can be transformed by a local ingredient. 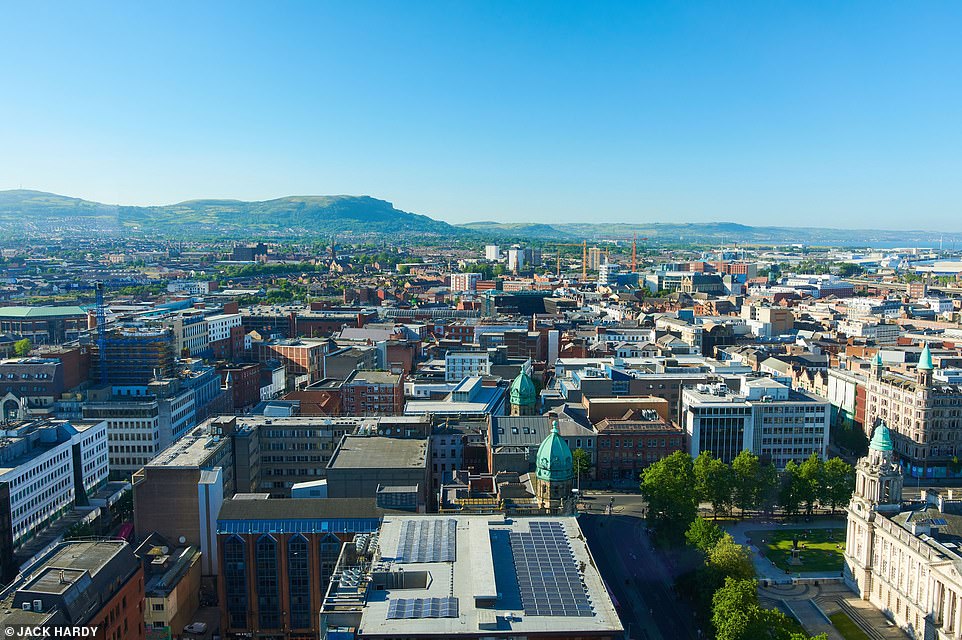 The views from the Grand Central are outstanding, as this image shows. Guests can gaze over the city to the hills beyond 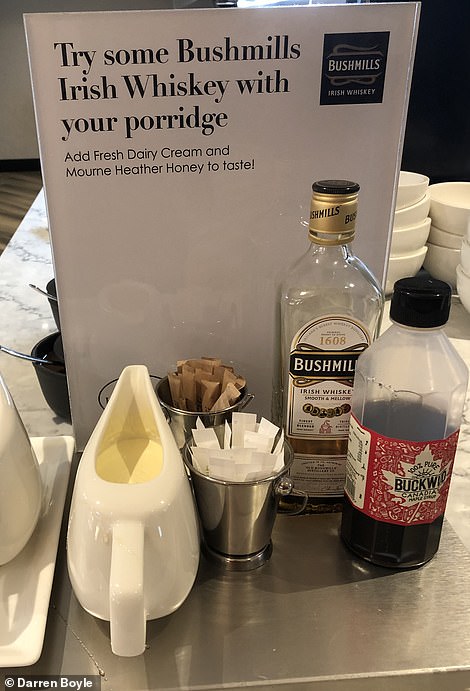 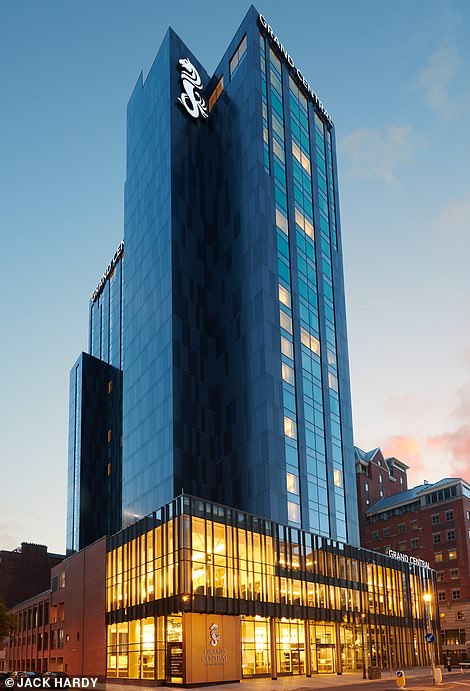 An unusual twist for breakfast is the addition of Bushmills Irish Whiskey to the porridge (left). Pictured right is the Grand Central in all its lofty glory

A few miles up the road from the Grand Central, near the Giant’s Causeway – whose hexagonal basalt columns were formed from ancient volcanic activity or legendary Irish warrior giant Fionn mac Cumhaill throwing rocks around, depending on who you talk to – one of the more unusual ingredients is sourced.

Bushmills Distillery is the world’s oldest, founded in 1608. At the Grand Central, with your porridge, you can pour a generous measure of Antrim’s finest whiskey over the oats.

For those who may be driving, Waggle Dance Honey from County Armagh is available.

The porridge oats, meanwhile, only have to travel five miles from their field to the mill in Tandragee, also in County Armagh. 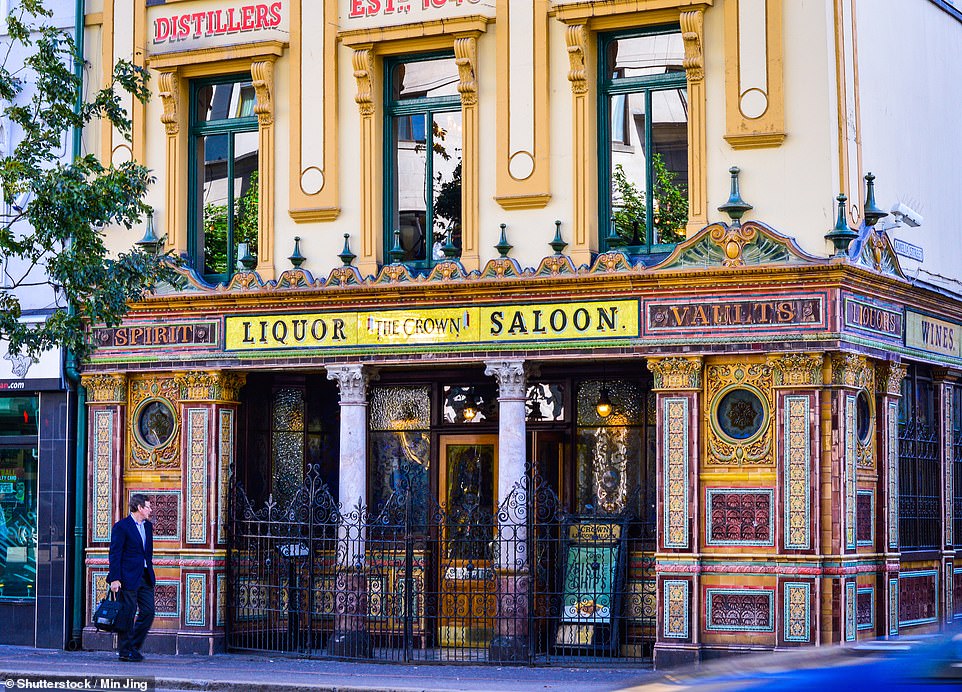 The hotel is only a short distance from the legendary Crown Bar, which is owned by the National Trust, and is a must-see for any visitor to Belfast 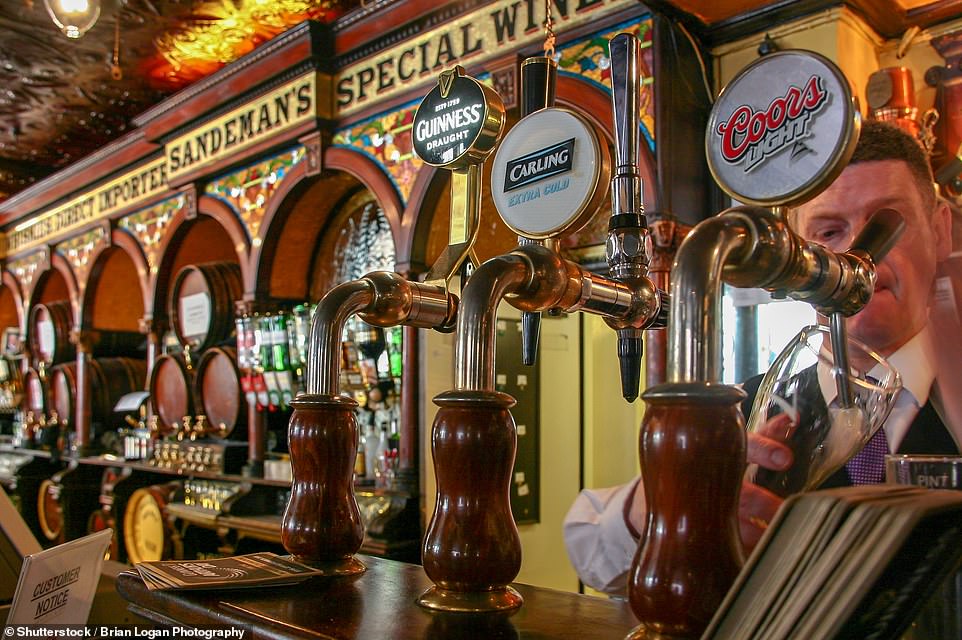 The Crown is an outstanding example of a Victorian gin palace. It used to be called The Liquor Saloon

Hotel breakfasts can be deeply uninspiring, but the Grand Central knows how to set you up for the day.

The mushrooms, bacon, sausages and black pudding are all locally sourced as well. As is the bread, milk, yoghurt and apple juice.

The hotel has to admit defeat when it comes to oranges, though, not being native to Northern Ireland.

However, the chefs have developed a ‘scuffin’, which is a cross between a scone and a muffin – with some apples sourced from Armagh.

The ground floor Grand Cafe is an informal spot for eating and boasts floor-to-ceiling windows. Almost everywhere in the hotel, the plan is to maximise the amount of light and associated views. 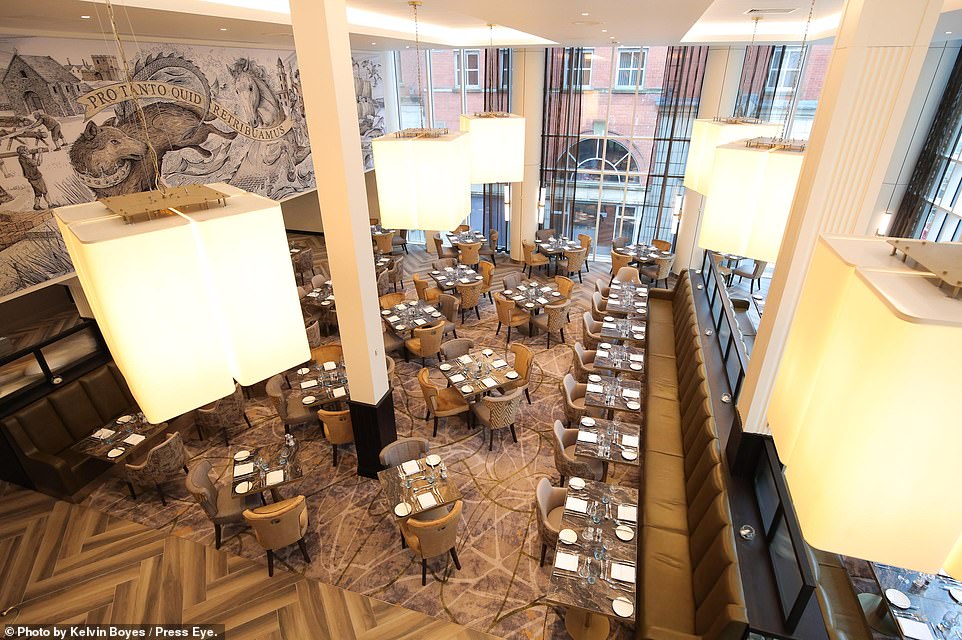 The main venue, the Seahorse Bar and Restaurant, is slightly more formal without being pretentious. Though the chefs do take delight in transforming what on first viewing appear ordinary ingredients into something special.

From the Guinness bread with salted butter, which had been whipped so it was incredibly light, to the dessert, the food was excellent quality.

Fish was always likely to be the starter given I was in Ireland, as there is normally an incredibly wide selection of locally sourced, sustainable options. 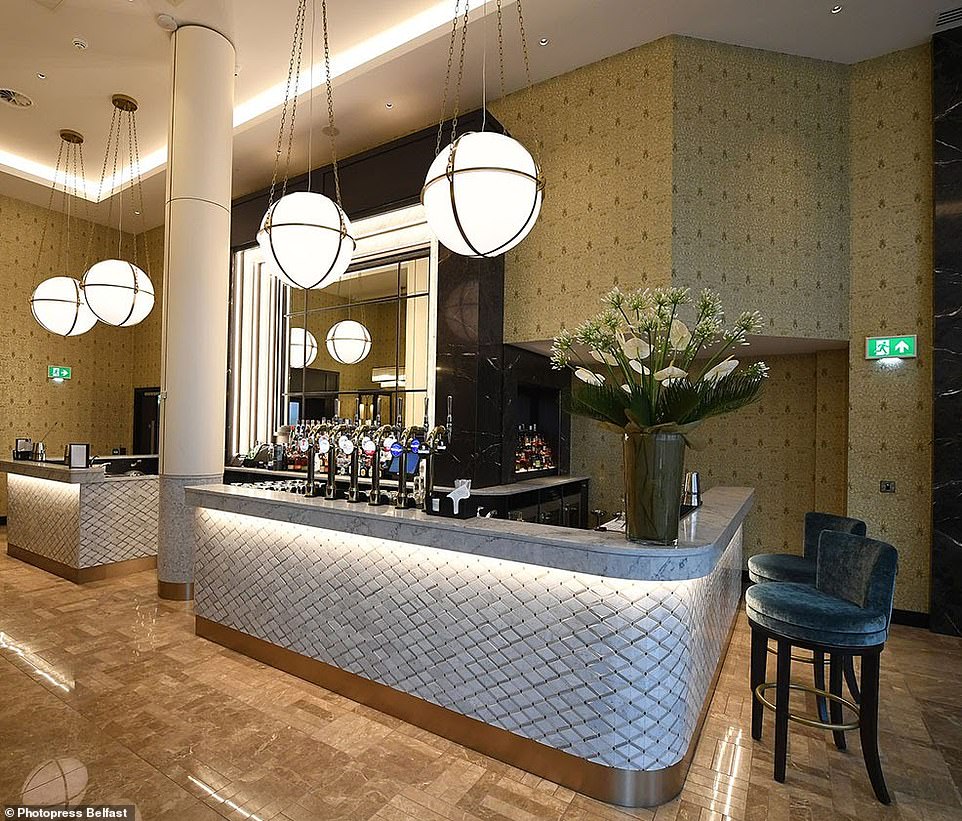 The Grand Central is owned by Hastings Hotels, which is an independent group with some of the finest luxury properties in the region 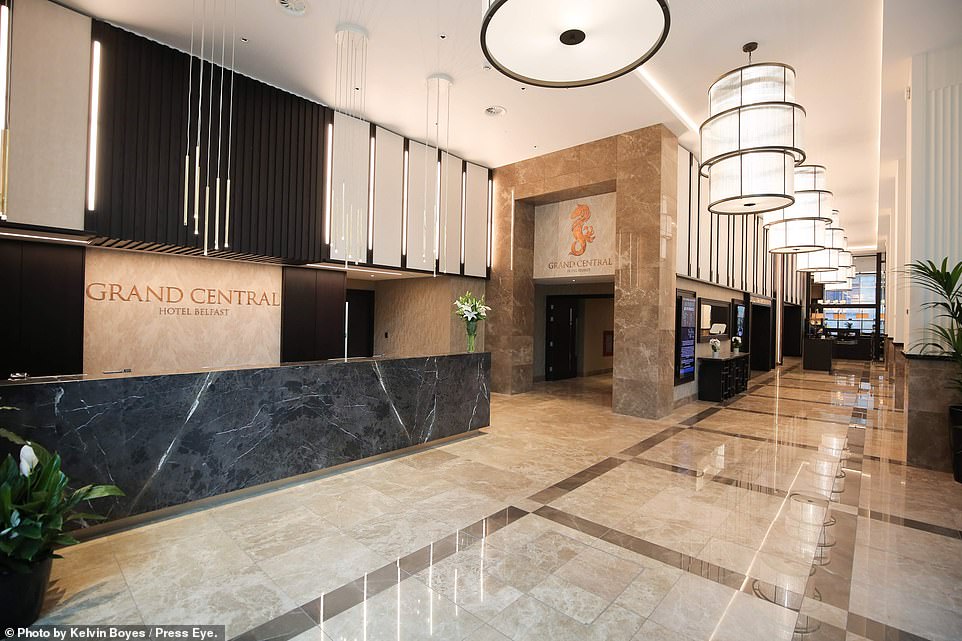 The hotel’s website proclaims: ‘Inside grandeur meets glamour just as it did in the Grand Central of yesteryear’

The whiskey-cured Glenarm Salmon was served with saffron kohrabi and wasabi emulsion. The tangy taste from the saffron complemented the excellent fish.

The amuse bouche served between the courses certainly showed off the skills of the chef, while the front of house staff knew exactly what was on the menu and, more importantly, where the ingredients had been sourced.

The main course suddenly presented a major problem though.

On the flight over, I had my mind set on a steak, to be accompanied by a rather nice Rioja.

Yet, there was a roast rack of lamb from the nearby mountains of Mourne, which are just south of Belfast. And then there was monkfish – not the best-looking fish when on the end of the line – but the purple sprouting broccoli and Madeira along with herb-crusted potatoes sounded excellent as well.

However, one sight of the Hannan’s salt aged sirloin steak on a neighbouring table had me sold.

The Glenarm Shorthorn beef is aged in a Himalayan salt chamber, which dry-ages the meat for between 28 and 45 days. 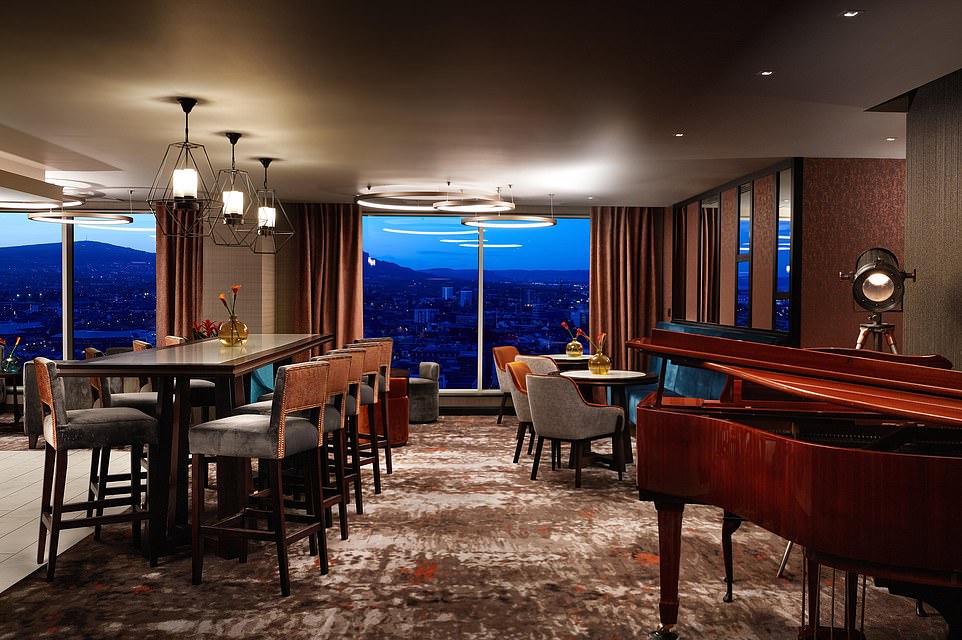 The most impressive part of the Grand Central Hotel is the Observatory cocktail lounge on the 23rd floor, which offers unrivalled views over the city and beyond, writes Darren 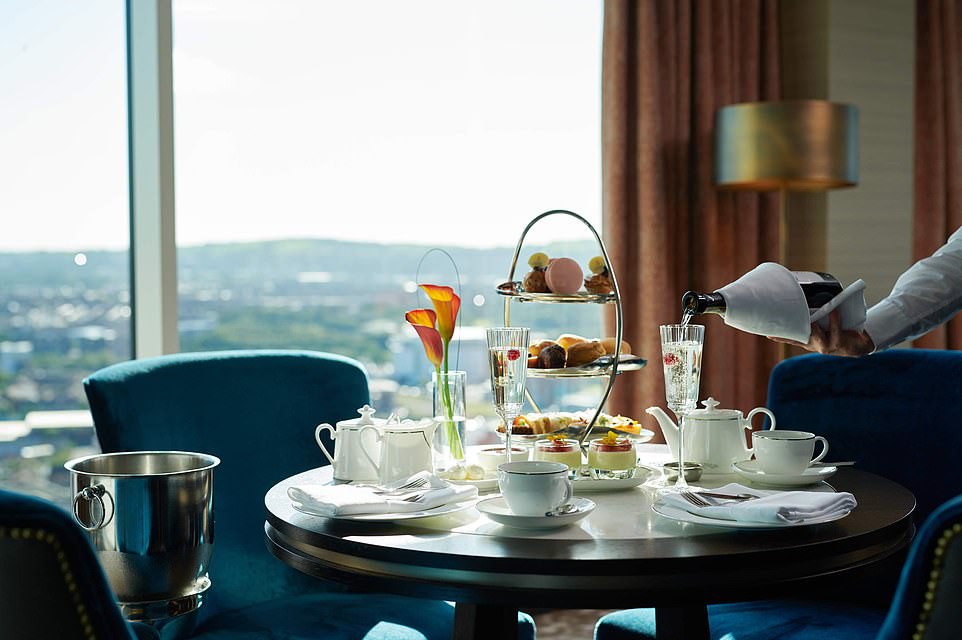 At the Observatory, it’s possible to indulge in an afternoon tea, with a splash of Champagne on the side

The Hastings Grand Central Hotel in Belfast (www.hastingshotels.com/grand-central/ 028 9047 1066) offers double rooms based on two people sharing from £190 on a B&B basis.

The result is an unbelievably tasty and succulent piece of beef, served as rare as you dare.

However, the most impressive part of the Grand Central Hotel has to be the aforementioned Observatory cocktail lounge on the 23rd floor, which offers unrivalled views over the city and beyond.

The hotel says it is the highest bar in all Ireland.

To add to the venue’s exclusivity, it is accessed from an express lift in reception.

Prior booking is recommended, whether it is for afternoon tea – again where the chefs get the opportunity to show off their skills – or the extensive cocktail menu for when the sun starts to disappear over Lough Neagh.

From that height, it is even possible to see the rain rolling in from the surrounding hills. By changing seat you can witness a different weather system.

But whatever the weather, the Grand Central is a towering triumph. 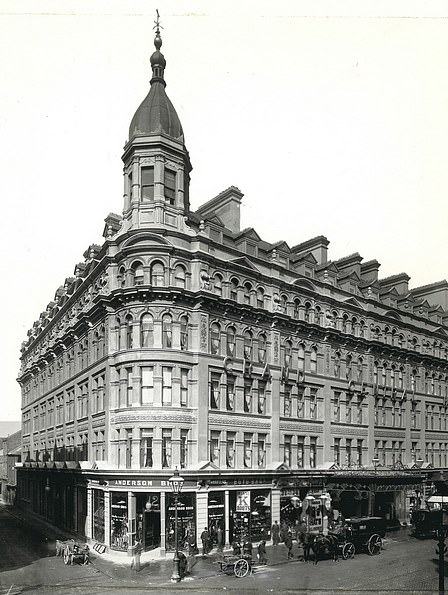 The original Grand Central opened on June 1, 1893, and was founded by businessman John Robb

The hotel opened on June 1, 1893, and was founded by businessman John Robb. He had originally planned a massive railway terminus on the site based on New York’s Central Station but was thwarted by town councillors. Instead he built a magnificent 200-bedroom hotel – but kept the name.

During WWI the Robb family was ordered by the government to give up the hotel for the war effort. They reluctantly auctioned off all the contents only to discover months later a mistake had been made – the requisition was meant for the Grand Central Hotel in Bristol.

The hotel was then sold to a consortium led by the Scotch whisky distiller, John Grant.

Financial troubles hit the Grand Central. As civil unrest swept Northern Ireland many people were becoming reluctant to stay in the heart of Belfast and lots of rival hotels were springing up. The Grand Central was no longer making a profit and ceased trading.

The reincarnated Belfast institution is ‘modern, simple and sublime’. The grand interior harks back to its Victorian heyday and also showcases the area’s maritime history. In the hotel’s words, it’s ‘a new jewel for Belfast with an old soul’.