A review of ‘eccentric and adorable’ Bickleigh Castle in Devon

An Inspector Calls: Bickleigh Castle in Devon is eccentric and adorable with local sausages for breakfast

Peel away from the M5 at the Tiverton turn-off, and after a 20-minute pootle through uppy-downy Devon lanes, you’ll come to Bickleigh Castle.

A castle it truly is: a little cinnamon-coloured fairytale alongside the River Exe, clad in roses and with flag-irises in its proper moat. Perfect for a short UK break.

Built by a Norman, Sir Richard de Redvers, it passed through the hands of the Courtenays and the Carews, who had so many castles that even they forgot about this one.

The Inspector checked into Bickleigh Castle in Devon which was built by a Norman, Sir Richard de Redvers

It was bashed to bits during the Civil War (when a fleeing Queen Henrietta Maria left behind a suit of armour belonging to her beheaded husband) and put back together again by Victorians.

These days its chatelaine, Sarah Hay, is a Labrador-loving charmer who has worked wonders. The whole set-up is eccentric and adorable.

Every vista is photogenic, from the rhododendron-valley which cuddles the estate, to the last resident white duck to have survived Mr Fox.

For bridal couples, there is a lovely four-postered suite within the castle.

Otherwise, the 17 rooms are individual and cottagey, clustered in the thatched medieval and Tudor buildings — the smithy, the dairy, the clock-tower — that surround the stable courtyard. 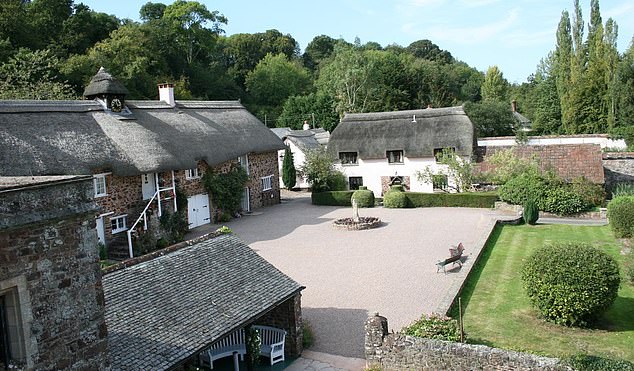 There are 17 rooms clustered in the thatched medieval and Tudor buildings – the smithy, the dairy, the clock-tower – that surround the stable courtyard

Most of them overlook the pretty garden from which you can watch fireflies dancing over the river.

Ordinarily, Bickleigh doesn’t offer dinner, but at the head of its bosky, mossy drive stands the irreproachable Fisherman’s Cot, where Exeter Uni students serve excellent food at about £25 a head.

Bickleigh does include breakfast, however: proper English, with fresh tomatoes and local sausages, and croissants for those who might still, unaccountably, hanker for abroad.