An Inspector Calls… Lainston House in Winchester has a cookery school and falconry displays but no spa, gym or swimming pool – and it’s ‘strangely refreshing’

The long and beautiful meandering drive leading to grand Lainston House is lined with irony.

For it was this drive — or, rather, the enforced re-routing of it — that bankrupted the previous owners, who had done so much to revive this magnificent William and Mary house near Winchester.

That was in 1983, after which Exclusive Hotels (which also has Surrey’s Pennyhill Park in its portfolio) bought the whole estate and began developing the gardens, adding rooms (now 50), launching a cookery school, presenting falconry displays and marketing the hotel as a wedding venue.

Lainston House in Sparsholt, Winchester is a ‘splendid setting’ with bed and breakfast rooms starting at £144

At this time of year, there are few better spots to eat al fresco than on the terrace overlooking a mile-long avenue of trees. There is no spa, gym or swimming pool, which is strangely refreshing.

Instead, there is goodish value for such a splendid setting, below, with bed and breakfast rooms starting at £144.

We are booked into what’s called a ‘cosy’, but because it’s a Tuesday evening and occupancy isn’t particularly high, we are promptly upgraded to a suite at the top of the house.

From there we admire the bare beams and fabulous garden views, but also detect a corporate whiff, not helped by the dreaded teddy bear sitting on the bed waiting to be bought.

The decor downstairs is prettier and the wood-panelled bar carved from a cedar tree that fell in the storm of 1930 works well. We’re thirsty and so order our drinks at the bar.

‘Would you like to take a seat?’ says the friendly Spanish barman. Which means: we want you to take a seat. ‘No, thanks. Two gin and tonics, please.’ 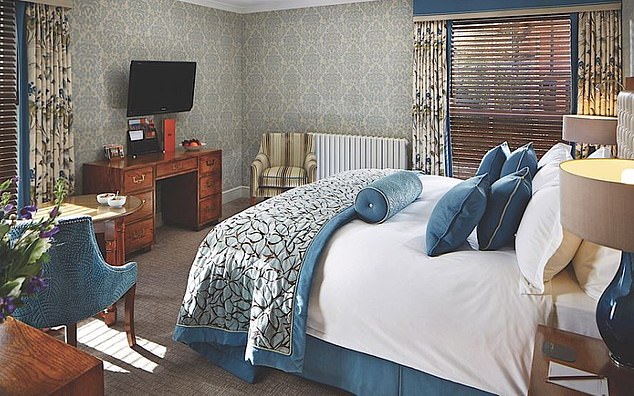 One of the ‘cosy’ rooms inside Lainston House. There is no spa, gym or swimming pool at the hotel which the Inspector says is ‘strangely refreshing’

There’s nothing better than watching a barman at work and monitoring the amount of ice or garnish that goes into your glass.

There are two eating choices: The Avenue is all white tablecloths, fancy food and fancy prices (£55 per head for two courses), while the Cedar Bar has popular staples such as prawn cocktail and posh fish and chips at a fraction of the cost.

There’s a certain amount of cross-table chat at breakfast. The scrambled eggs aren’t the best, but everyone’s happy. We think Lainston House is a good discovery.