A review of Marriott’s New York hotel the Moxy Chelsea

Think of New York, and a grid of streets instantly springs to mind: all so alike that you probably find yourself, like me, parading around with your smartphone in hand, constantly checking the map app.

One street that’s always stood out is West 28th in Midtown, distinguished by the unlikely jungle of foliage that springs from all its stores selling flowers, plants, and even trees, to residents in search of a little greenery.

Always in bloom and amply watered, I’ve found it the perfect place to stroll off an inevitable Manhattan hangover. Which makes it the best location for New York’s newest party hotel, the Moxy Chelsea. 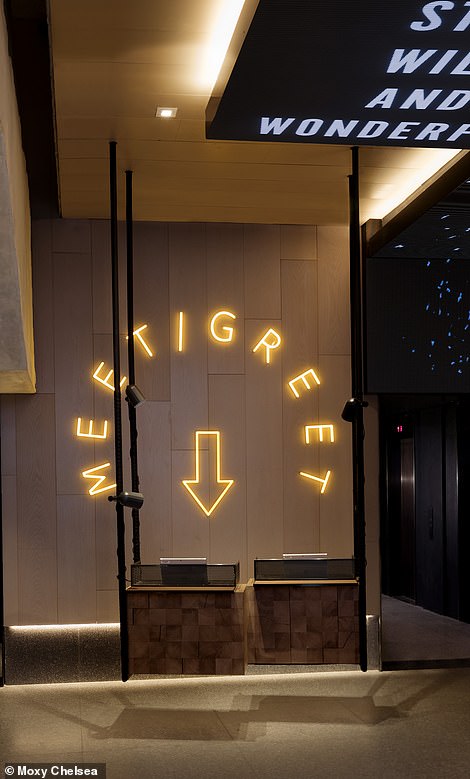 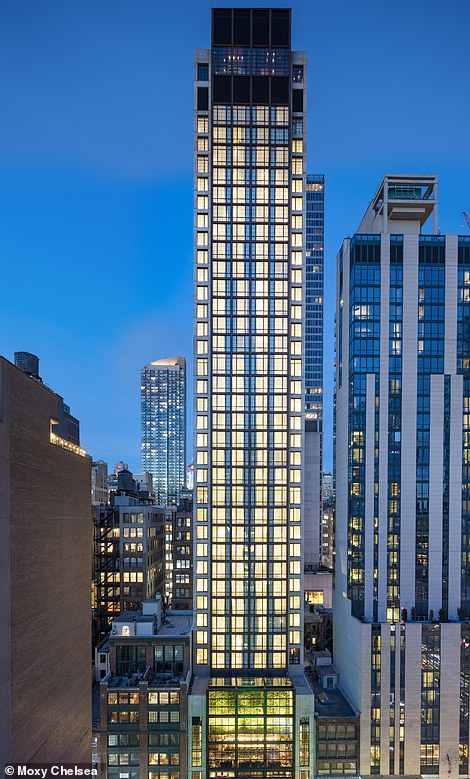 The lobby features welcome desks that hang from the ceiling, left. Right is a nighttime exterior shot 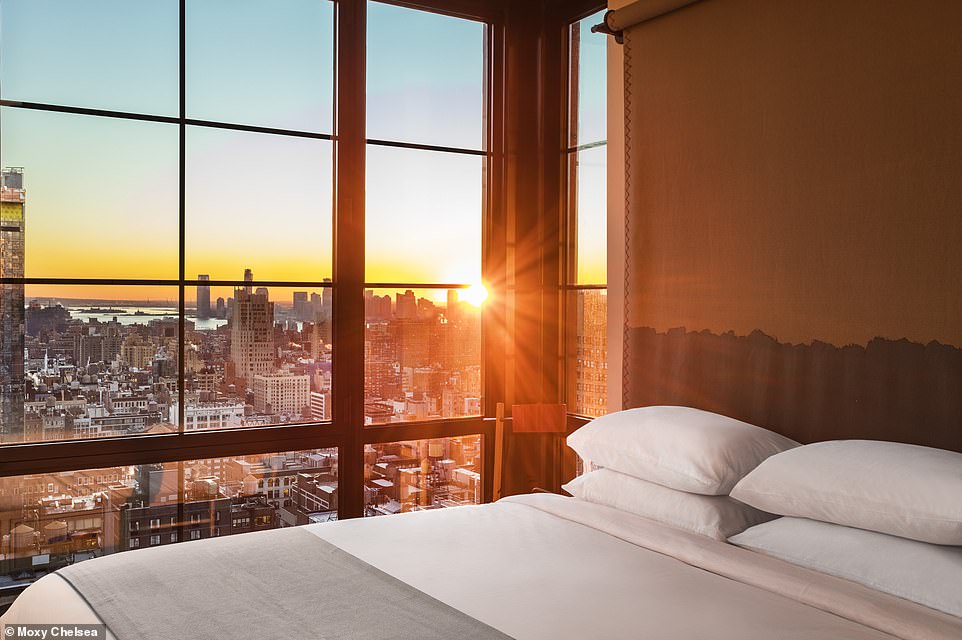 What does Moxy mean? It likely derives from the term ‘moxie’, historically used to describe showgirls and gangsters’ molls for their verve, nerve and penchant to break the rules.

This new hotel, whose Times Square sister has made quite a splash since opening a couple of years ago, has that in spades.

The foyer is a deceptively demure flower stall like any other on West 28th, but delve through the foliage and you’ll quickly find the wildlife.

Everything about the reception turns the conventional New York hotel lobby on its head: quite literally in the case of the welcome desks, which don’t stand sturdily on the floor but hang from the ceiling. 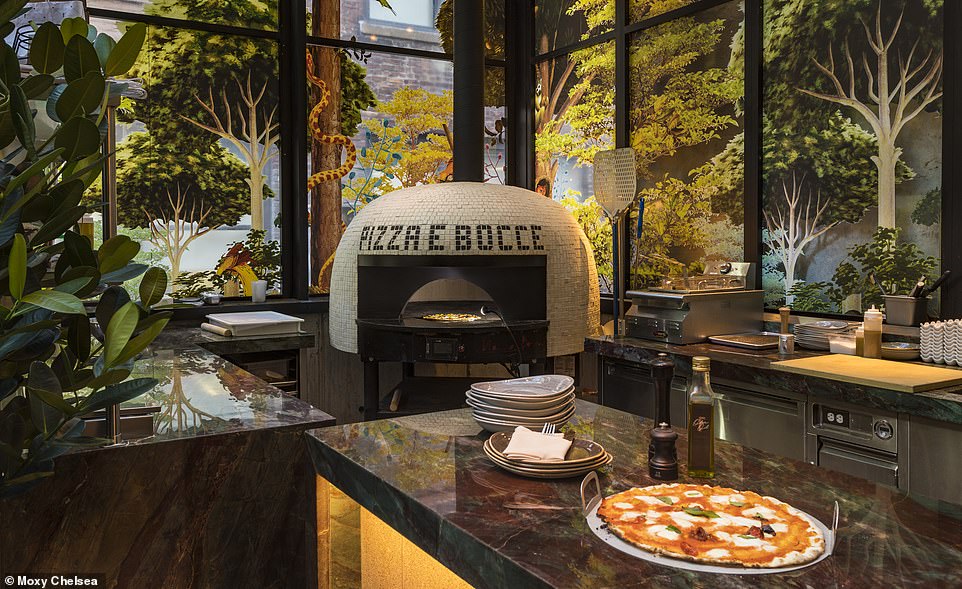 The hotel has a backyard with a huge pizza oven. James describes the space as ‘quirky’

A huge neon ‘meet and greet’ sign seems worlds away from the dim desk-lamps of hotels where your mum and dad would likely stay. R&B classics pump out and the reception staff are buzzing millennials in bomber jackets.

One of them, Marvin, slips me a poker chip that will grant me a free Prosecco in the first-floor bar. Just the tonic after my flight.

Slimline Manhattan hotels always have to skimp on something and yet the bar here occupies a whole floor and includes a sun-lit conservatory facing the street, a sumptuous central lounge and a quirky ‘backyard’ complete with a huge pizza oven.

By day it’s filled with dreamers and poets gawping at MacBooks; by night, it’s Instagram heaven, populated by an It crowd in their best Fifth Avenue threads. But that’s just for starters.

Take the elevator to the 35th floor and, before 9pm, residents get priority access to one of the city’s most chic new clubs, the Fleur Room.

The lush floral upholstery pays tribute to the street below, but you’ll only have eyes for the spectacular views uptown and down through the vast floor-to-ceiling windows. 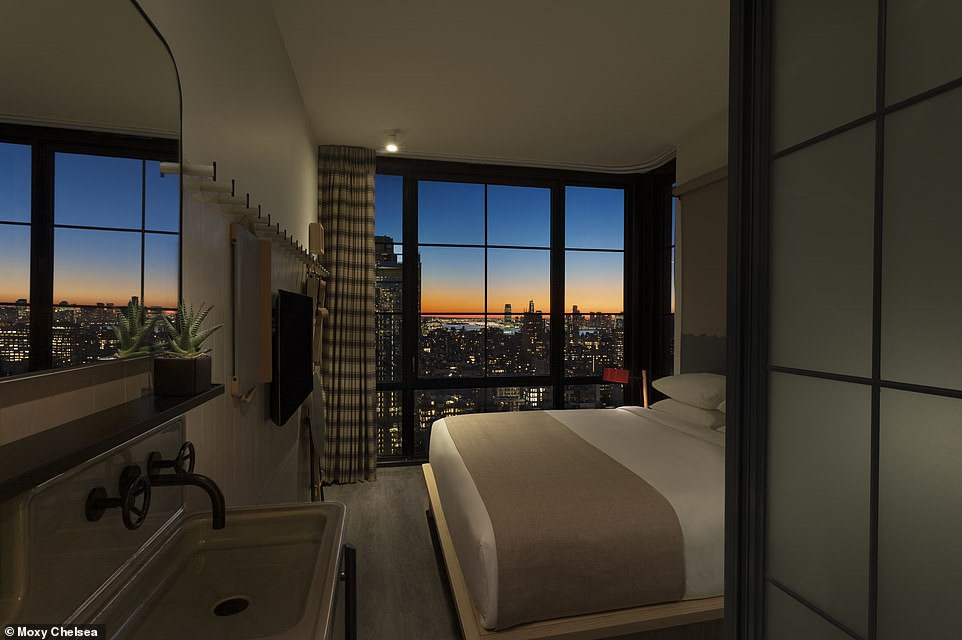 James says typically for Manhattan, the bedrooms are fairly compact, but then ‘you’re not here to sleep’ 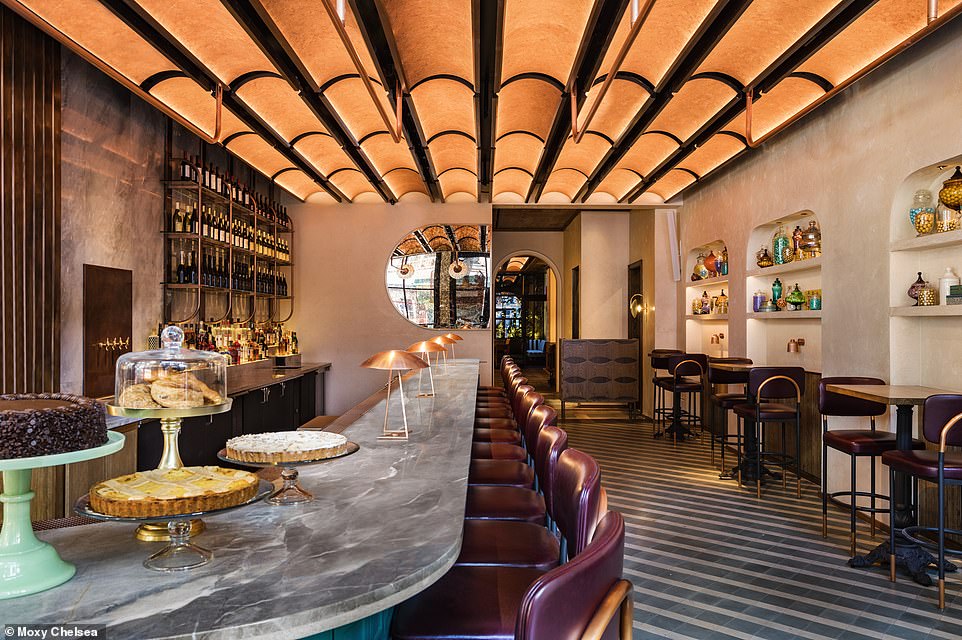 A view of Feroce, the hotel’s Italianate café on the ground floor. James writes: ‘At dawn, it’s tastefully low-lit, respectful that you may be having a slow start after the night before’ 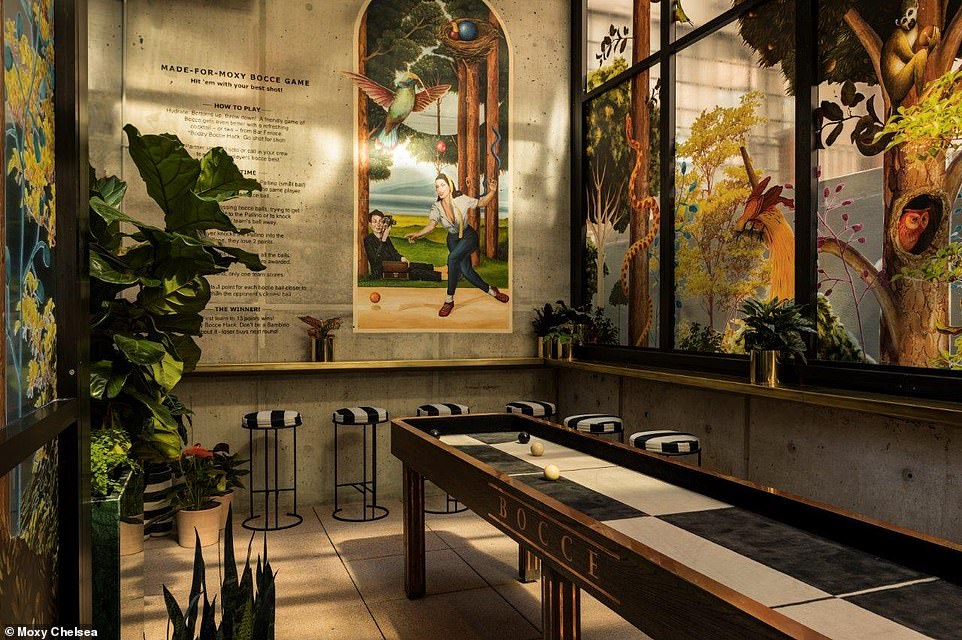 The hotel’s Feroce restaurant features an interior terrace where James says ‘you’ll want to throw your next significant birthday bash’. Above, a view of the terrace’s game room 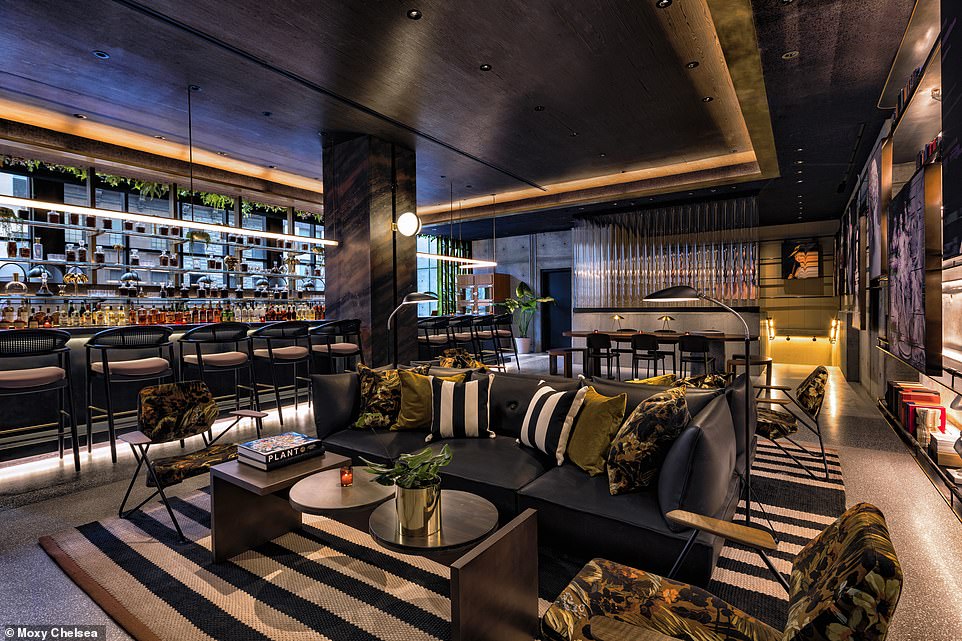 Bar Feroce, says James, ‘is where well-dressed metropolitans clink amber Aperols to kick off the evening in style’

With a Negroni in one hand, and the Empire State Building looming over your shoulder, you’ll be taking selfies all night.

Typically for Manhattan, the bedrooms are fairly compact, but then you’re not here to sleep.

Nonetheless, they all have the same floor-to-ceiling windows for maximum views, and the clever peg-and-rack systems increasingly found in New York hotels to save space in lieu of lumpy furniture.

Morning comes, and I head to Feroce, the Italianate café on the ground floor.

At dawn, it’s tastefully low-lit, respectful that you may be having a slow start after the night before.

You’ll soon be restored sitting at the smoke grey marble bar, sipping a perfect cappuccino from a gilded china cup, as the traders set to work outside. 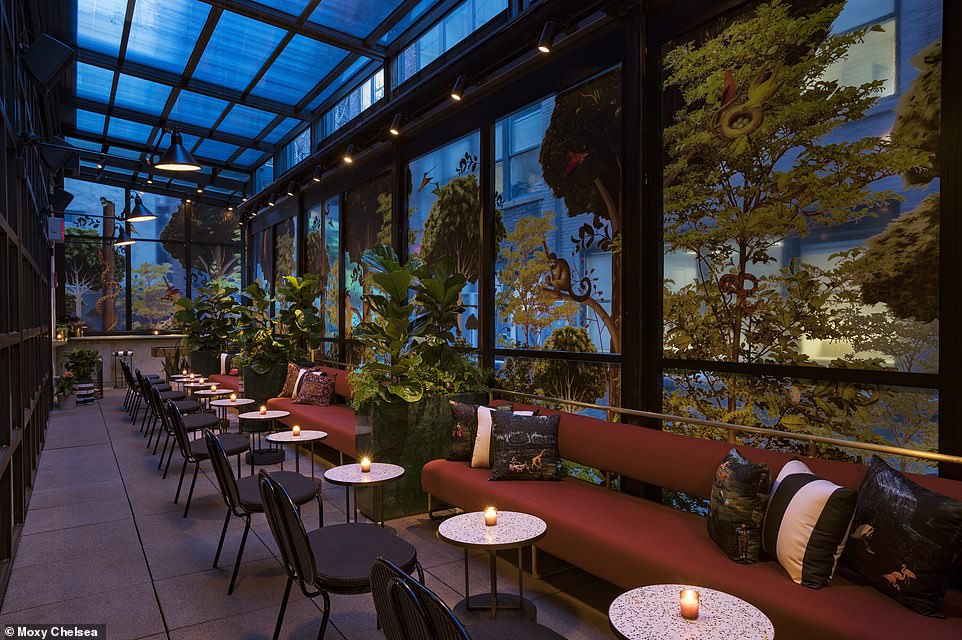 The interior terrace by night, with candles adding to the cosy atmosphere 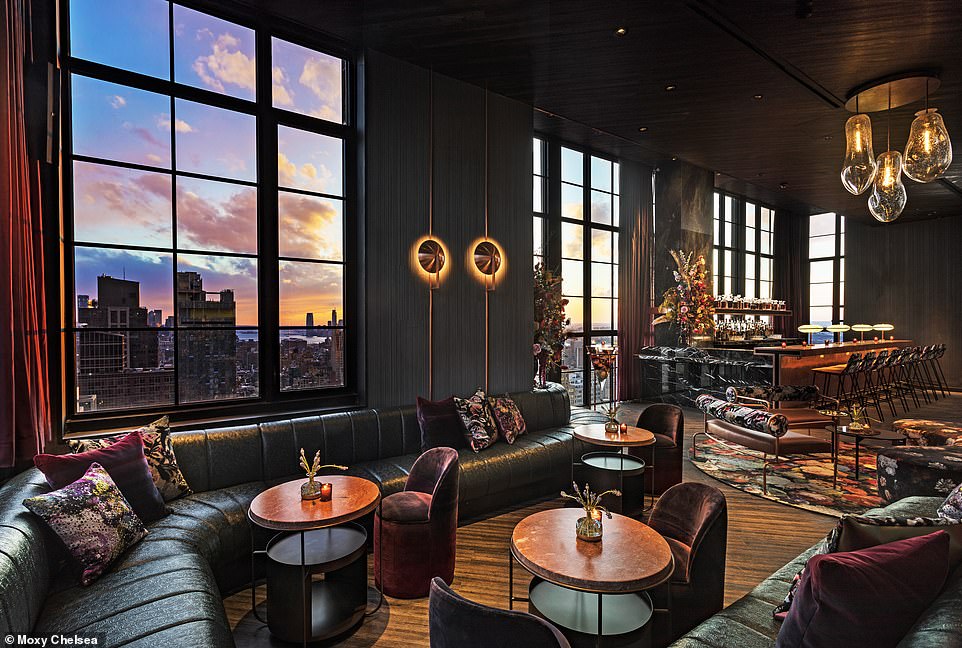 Hotel residents get priority access to one of the city’s chicest new clubs, the Fleur Room, if they get there before 9pm. It is located on the 35th floor 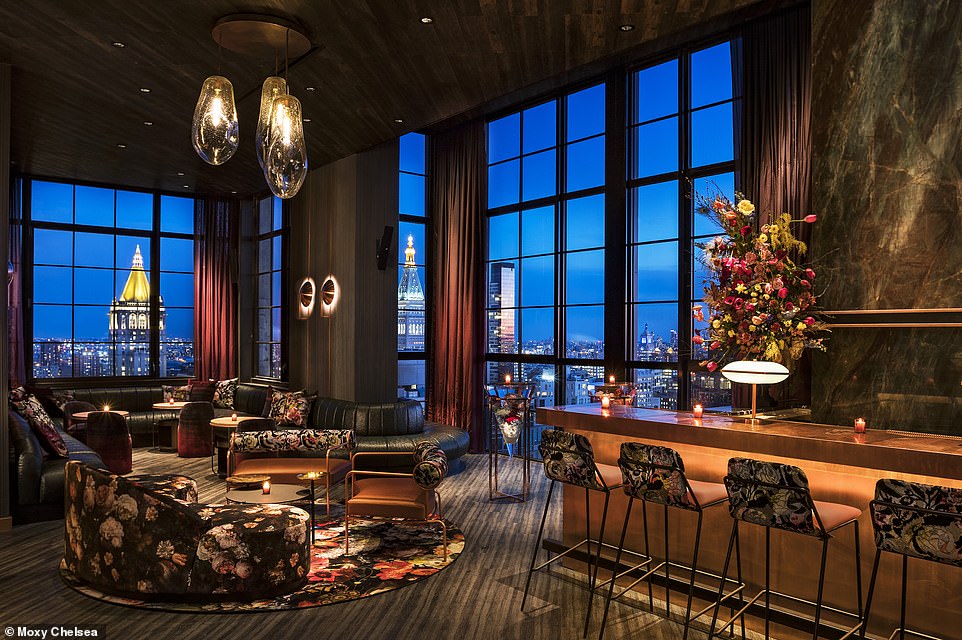 James says with the Empire State Building looming over your shoulder at the Fleur Room, ‘you’ll be taking selfies all night’ 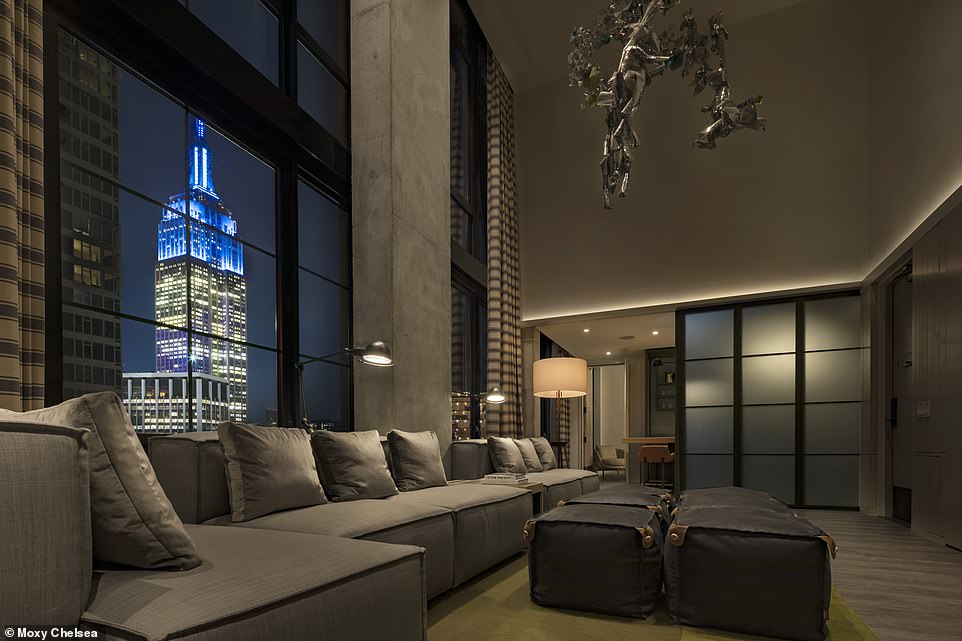 For the ultimate Moxy experience, book the Mondo suite, pictured, which is anything but compact

When you return from a day whizzing around the city, Feroce has taken on a different character, with well-dressed metropolitans clinking amber Aperols to kick off the evening in style.

A lot of New Yorkers flock to swanky hotel bars before heading off elsewhere for dinner, but there’s no need for that here: situated behind the café is the opulent Feroce restaurant, bathed in a rose gold terracotta glow, with an exclusive interior terrace where you’ll want to throw your next significant birthday bash.

New York does a lot of wannabe Italian, but this is the real deal: I bulldoze an elegant, delicate stack of melanzana and mozzarella built like Pisa’s tower, followed by oodles of bucatino pasta onto which the waitress slices fresh chilli peppers before my eyes.

Complementing a textbook tiramisu, I resist the tempting grappa trolley, instead opting for a flight of amaro: punchy and piquantly herby digestifs that I’ll be doing my best to bring back into fashion on my return to London.

Whatever moxie means, I’m certainly feeling it as I take the express elevator back to the Fleur Room for another night of fun.

To book a stay visit moxy-hotels.marriott.com.