The Pheasant ruffled feathers in a previous incarnation.

It was once the Yew Tree Inn, with celebrity chef Marco Pierre White in charge — although he never donned his cooking whites and became something of an absentee landlord.

Then, along came a local pub group (which still owns the freehold) and the Yew Tree struggled on until one of the managers and her husband negotiated a deal to run it themselves.

No surprise that the first thing they did this summer was change the name. A fresh start — and a delightful one, run by an enthusiastic young team who seem determined to blow away any cobwebs from the previous regime.

There are eight rooms, six above the 17th-century inn and two round the back in an attractive paved garden.

Rooms are small but there’s not much anyone can do about it in such a higgledy-piggledy old boozer with low ceilings, exposed beams and flagstone floors.

And although space might be tight in the bedrooms, there are plenty of cosy nooks downstairs for romantic liaisons in front of two open fires.

Highclere Castle (of Downton Abbey fame) is just up the road, which surely will be good for business, and there are fabulous walks nearby.

The menu bounces along in traditional gastro-pub style, with starters from £3.50 for a terrific Scotch egg to crab cakes for £8. 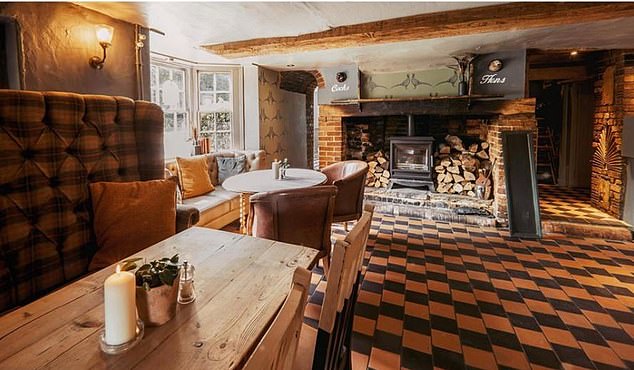 The dining room in the traditional gastro-pub style, where there are starters from £3.50 for a terrific Scotch egg to crab cakes for £8

I daresay prices will rise once the new team gets into the pricey Hampshire spirit but, right now, £80 or so for bed and breakfast is good value.

Breakfast is generous, too. I down three double espressos to get the engine started but am only charged for one. We hope this pheasant will fly for years to come.