A sound grasp! Scientists develop a robot arm that can pick up and carry objects without touching them using ultrasonic levitation

A robot arm that can pick up and carry objects without touching them using ultrasonic levitation is being developed by scientists.

Researchers at ETH Zurich used an array of tiny speakers that emit sound at tightly controlled frequencies and volumes in order to ‘grip’ an object.

The sound waves from the speakers create a pressure field that holds an object up – a kind of ‘acoustic levitation’, according to researcher Marcel Shuck.

Dr Shuck says the acoustic gripper will be ideal for delicate tasks such as assembling watches or microchips, where any damage from touch marks would cost money.

The sound waves used to levitate an object can also move it around by having audio coming from multiple directions, the team says.

The effect behind the acoustic gripper has been around for more than 80 years and was first used in space travel – it involves creating a pressure field from ultrasonic waves that humans can’t see or hear.

Pressure points are created as the acoustic waves overlay each other, and small objects can be trapped within these points.

As a result, they seem to float freely in the air – in an acoustic trap, the team said.

It is currently at the prototype stage and involves multiple tiny speakers fitted within two semi-spheres pointing in towards each other to create the pressure field.

Shuck and his team created software that lets them control the speakers to adjust the acoustic pressure points and move the objects around.

At the moment it is a fairly static process, but the goal is to be able to change position in real time without the object falling to the ground.

At the moment, researchers can move various small objects around but have to use the software to adjust the gripper to the shape of the object.

The robot arm then transports the gripper and the object to a target destination. 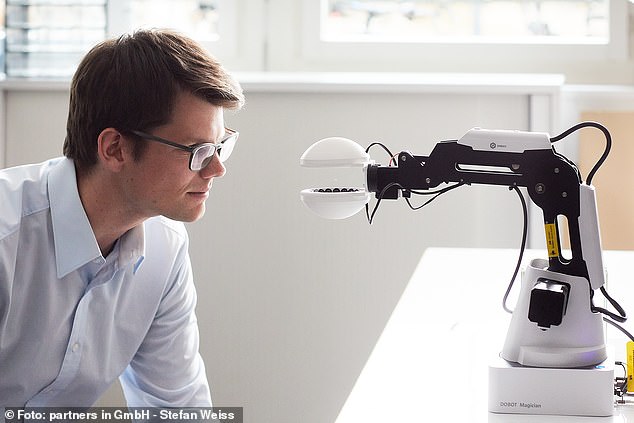 The audio gripper was created by Dr Marcel Alexander-Schuck. It is currently at the prototype stage and involves multiple tiny speakers fitted within two semi-spheres pointing in towards each other to create the pressure field 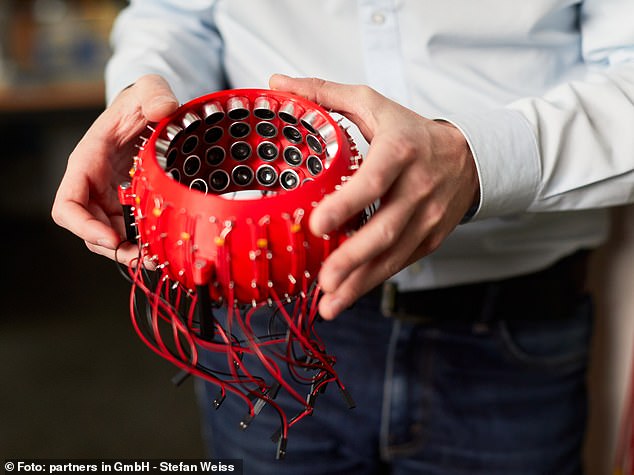 Pressure points are created as the acoustic waves overlay each other, and small objects can be trapped within these points

The acoustic gripper eliminates the need for an extensive set of expensive high-​precision grippers, according to Shuck and his team.

He said the robot carrying the gripper doesn’t even need to be particularly precise.

The exact positioning of the object being held is determined by the acoustic waves controlled by the software, not the robot arm.

His next stage is to work with various industries to find out exactly what they’d expect from an acoustic gripper.

The innovation is likely to be of interest to the watchmaking industry, where highly precise micromechanics is essential for handling expensive minute components.

‘Toothed gearwheels, for example, are first coated with lubricant, and then the thickness of this lubricant layer is measured,’ Shuck said.

‘Even the faintest touch could damage the thin film of lubricant.’

WHAT IS A SONIC ATTACK?

Sonic attacks fall into two categories – those that involve audible frequencies and those that are ultrasonic and therefore inaudible.

Infrasonic weapons such as the long range acoustic device (LRAD) rely on loud, low frequency sounds (infrasounds) and are inaudible.

These are produced by bulky units that are used for things such as crowd control and on high power can cause symptoms such as nausea.

Ultrasonic (high frequency) bursts also cannot be felt or heard. This is what could have been used against US diplomats in Cuba in September 2017.

Embassy workers reported hearing loss, dizziness, speech issues, cognitive problems and other medical symptoms that appeared to stem from a ‘sonic attack’ in their homes or hotel rooms.

‘The extent of these biological effects depend on how the ultrasound reaches the person being “attacked”’, according to Dr Ian McLoughlin, professor of computing at the University of Kent.

Dr McLoughlin says that the case of the US diplomats is unlikely to be a deliberate attack – instead, these injuries are probably the side effects of intrusive surveillance.

‘Any sound gets less powerful the further you are from a loudspeaker, but ultrasound loses power far more quickly with distance than audible sounds do’, he said, writing for the Conversation.

‘A single ultrasonic emitter (loudspeaker) would struggle to generate enough power to affect someone halfway across a typical room.’