They have been married for nearly nine years, but there’s clearly still nothing like a little friendly competition between husband and wife to keep a relationship fresh.

As the Mail revealed yesterday, the Duchess of Cambridge – who was a sporting whizz during her Marlborough College school days – is fiercely competitive when it comes to playing tennis against her husband.

She’s been having lessons to hone her skills at the exclusive Hurlingham Club, in London, which surely means that William’s chances of ever winning a match are slim.

According to Australian former world No 1 Rod Laver (who has sat with the couple in the Royal Box at Wimbledon), William has admitted he can’t beat his other half.

But that hasn’t prevented a long-standing rivalry between the pair in all manner of different arenas.

Who could forget the dragon boat race, in 2011, in Canada, when the two went head to head – with William telling his new wife ‘there’s no chivalry in sport,’ while Kate told her team she ‘really wanted to beat’ her husband? She didn’t.

Whether it’s on the cricket field or in the kitchen, it seems no areas are off limits for the competitive Cambridges…..

Ahoy there, captain Kate! Wearing nautical stripes, Kate has the edge (at least in the fashion stakes) as she and William helm rival yachts for a race around Auckland Harbour, while visiting New Zealand, in 2014. It’s all a friendly affair, but ponytailed Kate’s look of intensity, standing at the wheel of an 80ft America’s Cup sailing vessel, says this is a race she wants (itals) to win. She can’t resist a cheeky victory salute as she sails past her husband, and back to harbour. WINNER: Kate’s mast-ered this one and sails to victory. Twice 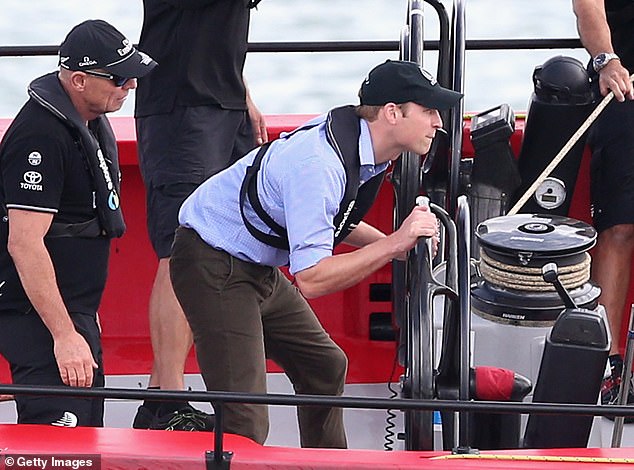 Prince William, Duke of Cambridge helms an America’s Cup yacht as he races Catherine, Duchess of Cambridge in Auckland Harbour on April 11, 2014 in Auckland, New Zealand 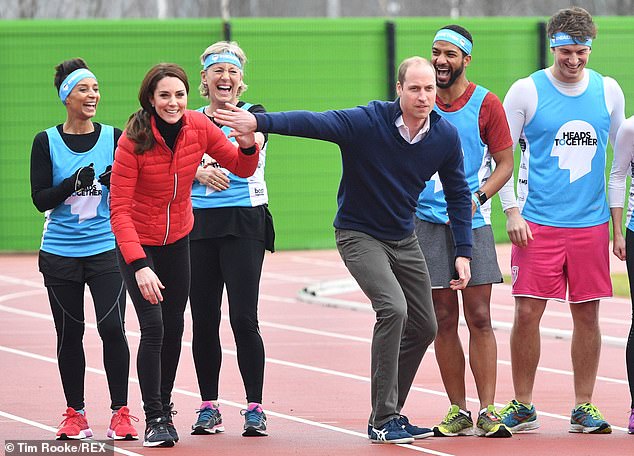 Keep up, Kate! A bit of competitive banter at the starting line, as William and Kate line up when joining a London Marathon training session in 2017. Kate, in her New Balance trainers and black skinny jeans, arguably looked the sportier of the pair at the event to promote their mental health charity, Heads Together.. But in the end, it was William’s younger brother Prince Harry, who romped to victory, with William second, closely followed by Kate. WINNER: Harry! 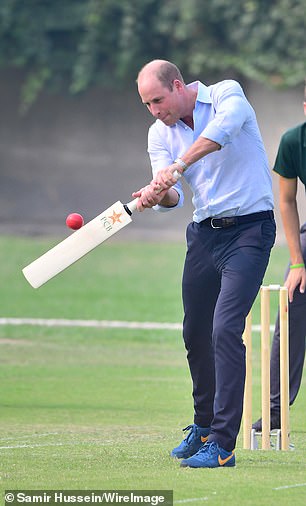 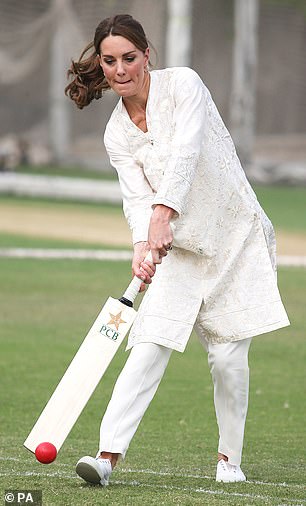 HOWZAT! During a five-day tour of Pakistan last year, it was only a matter of time before the sporting rivals took the chance to face off in the country’s national sport: cricket. Kate displayed her own glamorous take on cricketing whites, in a cream shalwar kameez – a traditional outfit of long tunic and trousers, with a sensible pair of white pumps, while William slipped a pair of Nike trainers on with his light blue short and navy trousers. There were cheers as the duke hit a six, while Kate was caught out twice after half a dozen balls. WINNER: With a six from Wills, there’s only one winner 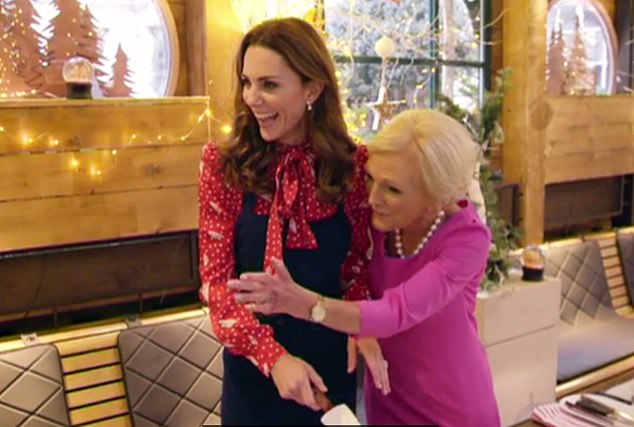 William and Kate had their own Bake Off before Christmas, helped by Nadiya Hussain and Mary Berry. They prepared meringue roulades. Mary diplomatically refused to choose a winner, declaring that both creations were delicious. WINNER: Kate’s creation looked more masterful 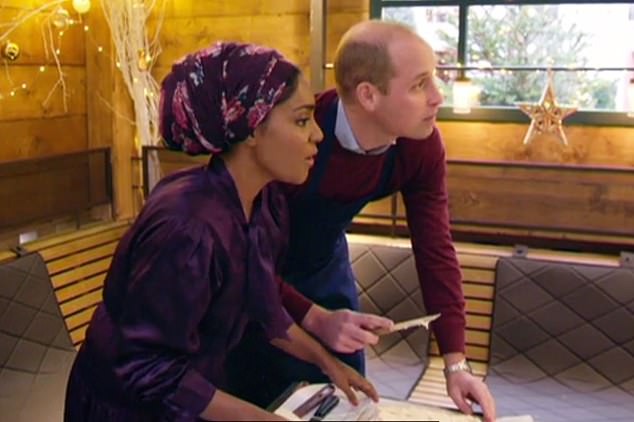 This picture shows Will and Nadia Hussain take on Kate and Mary  in a roulade competion. Mary declared it a draw 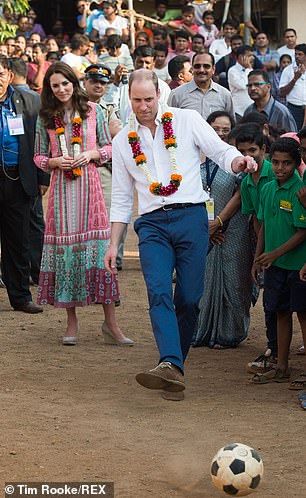 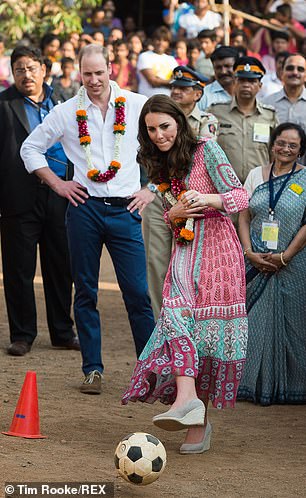 Putting the boot in: Eyes fixed on the ball, biting her lip in concentration, Kate was an enthusiastic participant when asked to show off her footballing skills during a visit to Mumbai, in 2016. Hands on hips, is that a smirk on William’s face as he watches his wife’s efforts, in a pair of towering wedge heels? On the same visit, meeting children being helped by three charities, the pair faced cricketing legend Sachin Tendulkar, both impressing the sportsman (even if they were both caught out). WINNER: It’s a draw (Kate even managed to jump over some plastic cones in her wedges) 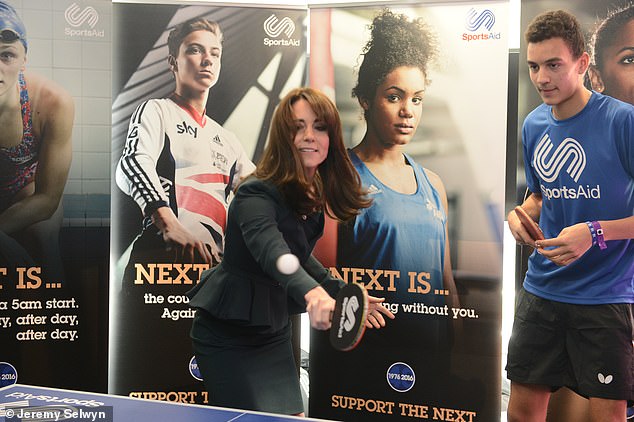 Ping pong Queen: Thank goodness William didn’t have to face his wife at the other end of the table during a sporting charity visit, in London in 2018. The pair both picked up bats, but it was the Duchess who won the plaudits. ‘She was a whizz with that forehand,’ said one impressed coach. It took her a while to get used to the speed of the bat, but with practice, she could be brilliant.’ WINNER: Kate smashes it 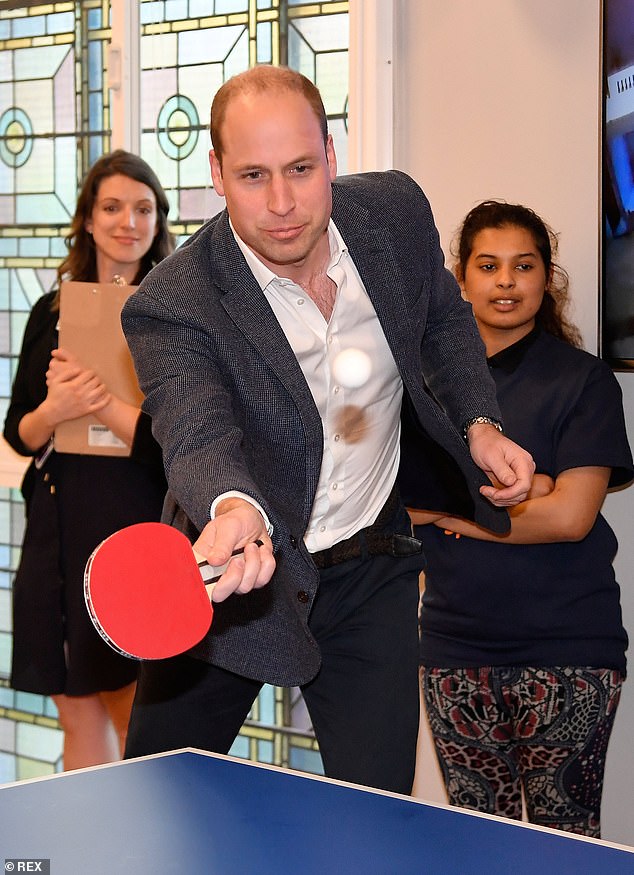 Prince William playing table tennis as he attends the opening of the Greenhouse Sports Centre in central London, April 26, 2018

Jolly hockey sticks: On the first day of their royal tour of Sweden and Norway, in 2018, competition was brewing. The couple took part in a hockey penalty shootout at an outdoor ice skating venue in Stockholm. They were each given three attempts to score goals, with ex-school hockey captain Kate (pregnant with Prince Louis at the time) in high spirits. WINNER: Contrary to expectation, it’s William, scoring two goals to Kate’s one

Kate takes a bow:  A pair of heels and a floor-length wrap-skirt is not, perhaps, the most suitable attire for an archery showdown. But Kate did so with aplomb when invited to try the national sport of Bhutan, during a visit in 2016. The Duchess burst into fits of giggles as her shot only travelled about 20 yards, landing no where near the target but falling instead near the watching press pack. Her suited husband didn’t fare much better, his arrow overshot and headed for the road. Thank goodness he didn’t have any of the resident cheerleaders directing their songs at him (they are known for singing obscenities to put off opponents). WINNER: Although neither nailed the target, Kate wins points for trying to do so in heels