A royal cocktail masterclass! How to make a Princess-inspired beverage, just like Kate

On their surprise royal trip to Belfast, the Prince and Princess of Wales faced off in a cocktail-making competition as they put their mixology skills to the test.

Prince William and Kate, both 40, laughed during the duel to be the quickest to make the potent drink, known as an Up the Lagan in a Bubble, while visiting Trademarket on their second stop of their whirlwind tour.

The drink was a reference to the river that flows through Belfast and local slang for ‘I wasn’t born yesterday’.

She’s a natural! The Princess of Wales, 40, beamed as she measured out ingredients to make an Up the Lagan in a Bubble at a bar in Belfast. 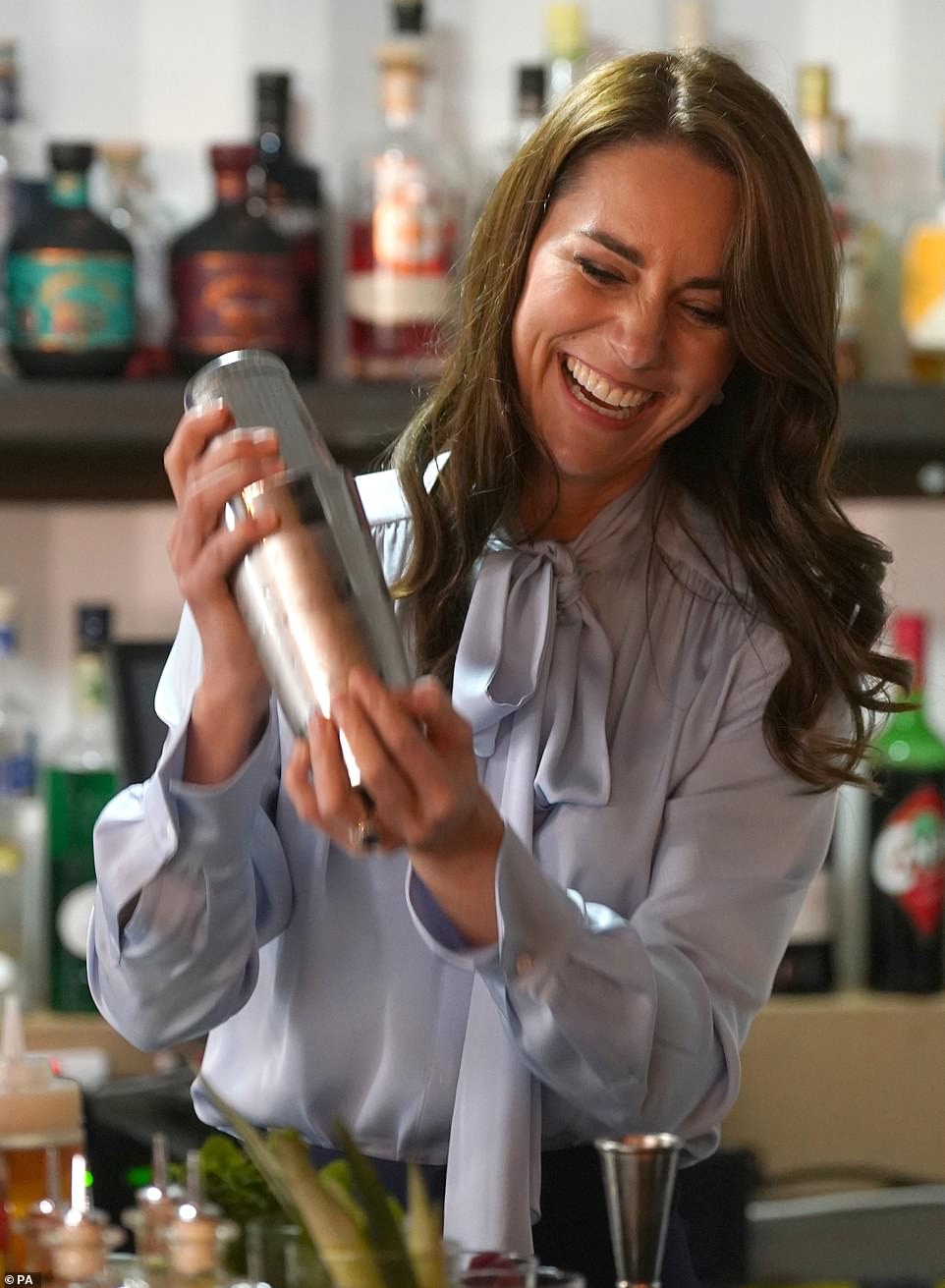 The Princess of Wales looked thrilled as she shook up her cocktail in competition with her husband, Prince William, who was making his own version on the other side of the bar

Unfortunately for the Princess, her husband was declared the winner – but she certainly looked the part as she measured out ingredients and gave them a mighty shake to create her concoction.

Looking perfectly polished in her £295 Winser London silk blouse and matching blue coat, thought to be from Alexander McQueen, teamed with elegant navy trousers, recycled £85 Missoma hoop earrings and a DeMellier London £295 handbag, Her Royal Highness was the coolest bartender in Northern Ireland.

But how exactly does one make an Up the Lagan in a Bubble, with an extra dash of regal class?

Get your ingredients right 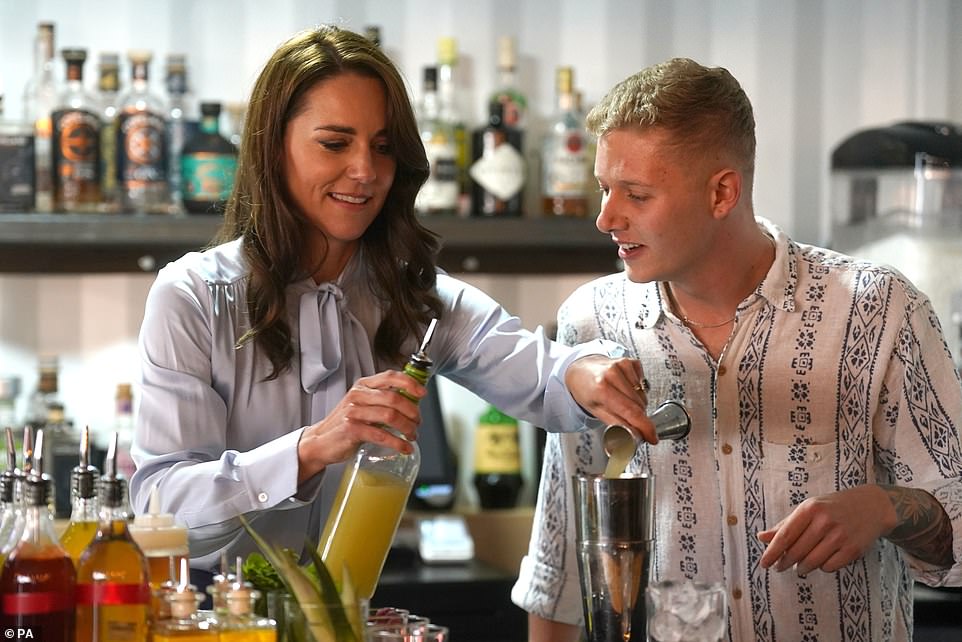 The concentration on Kate’s face was immeasurable as she poured out exact measures of ingredients, including gin, sherry and Japanese plum liquer to make her cocktail 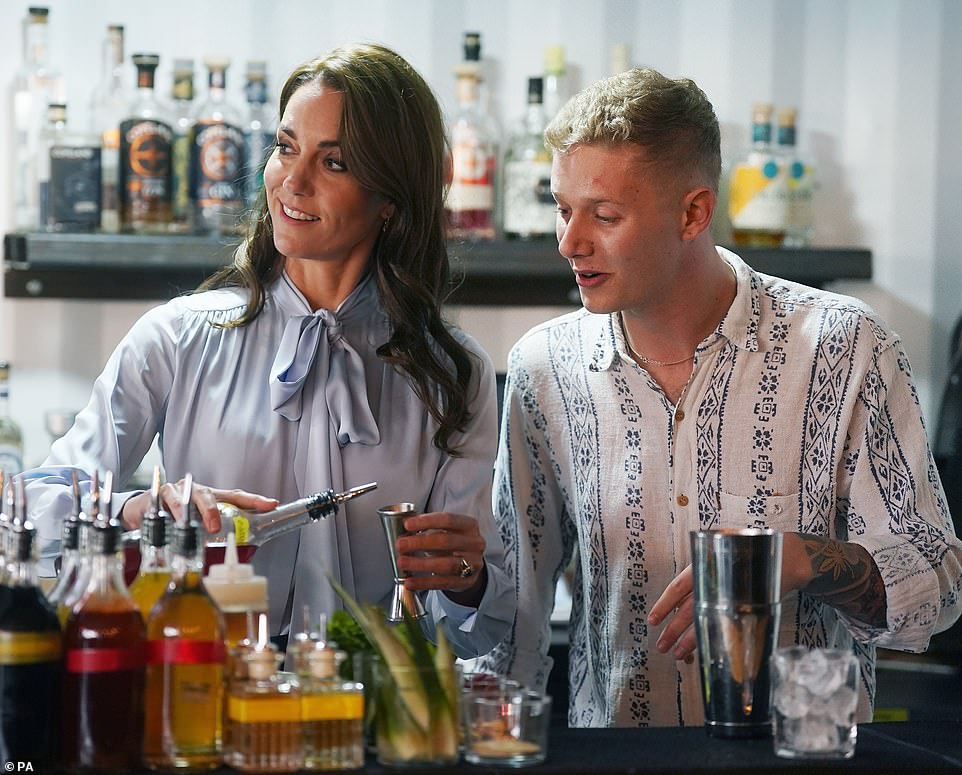 Confidence is key! The Princess of Wales flashed a knowing smile at her opponent, Prince William, as she poured out measurements for her cocktail 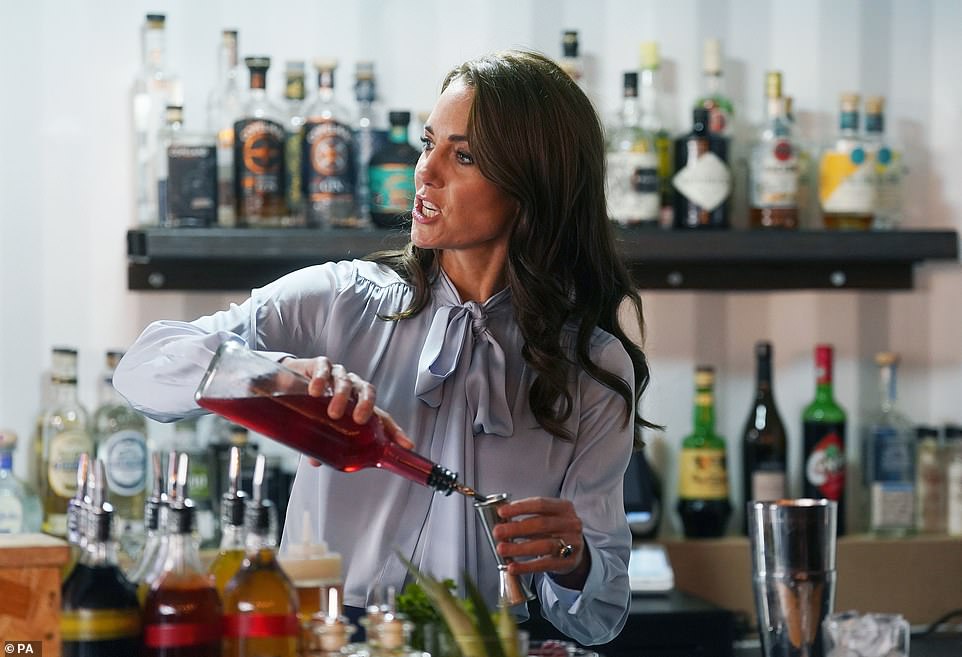 Don’t be afraid to ask for help! Kate appeared to ask a question or two about her cocktail while pouring out her measurements – the best way to ensure you don’t make a mistake

No cocktail will ever turn out as planned if you are not precise with your ingredients – and this Belfast classic is no exception.

To make an Up the Lagan in a Bubble cocktail, you will need: 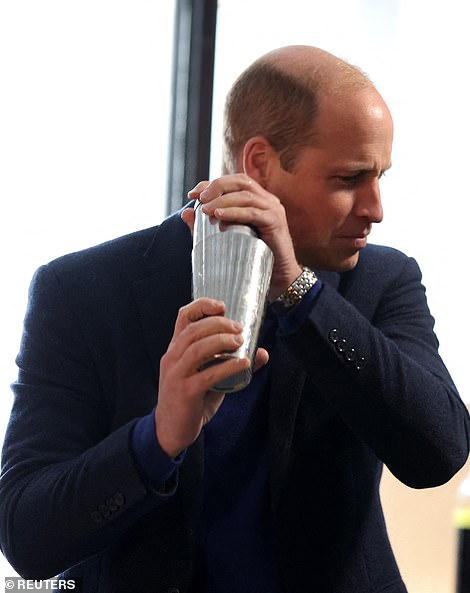 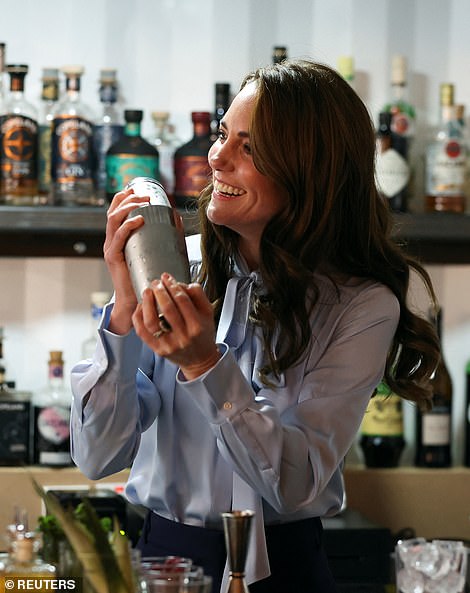 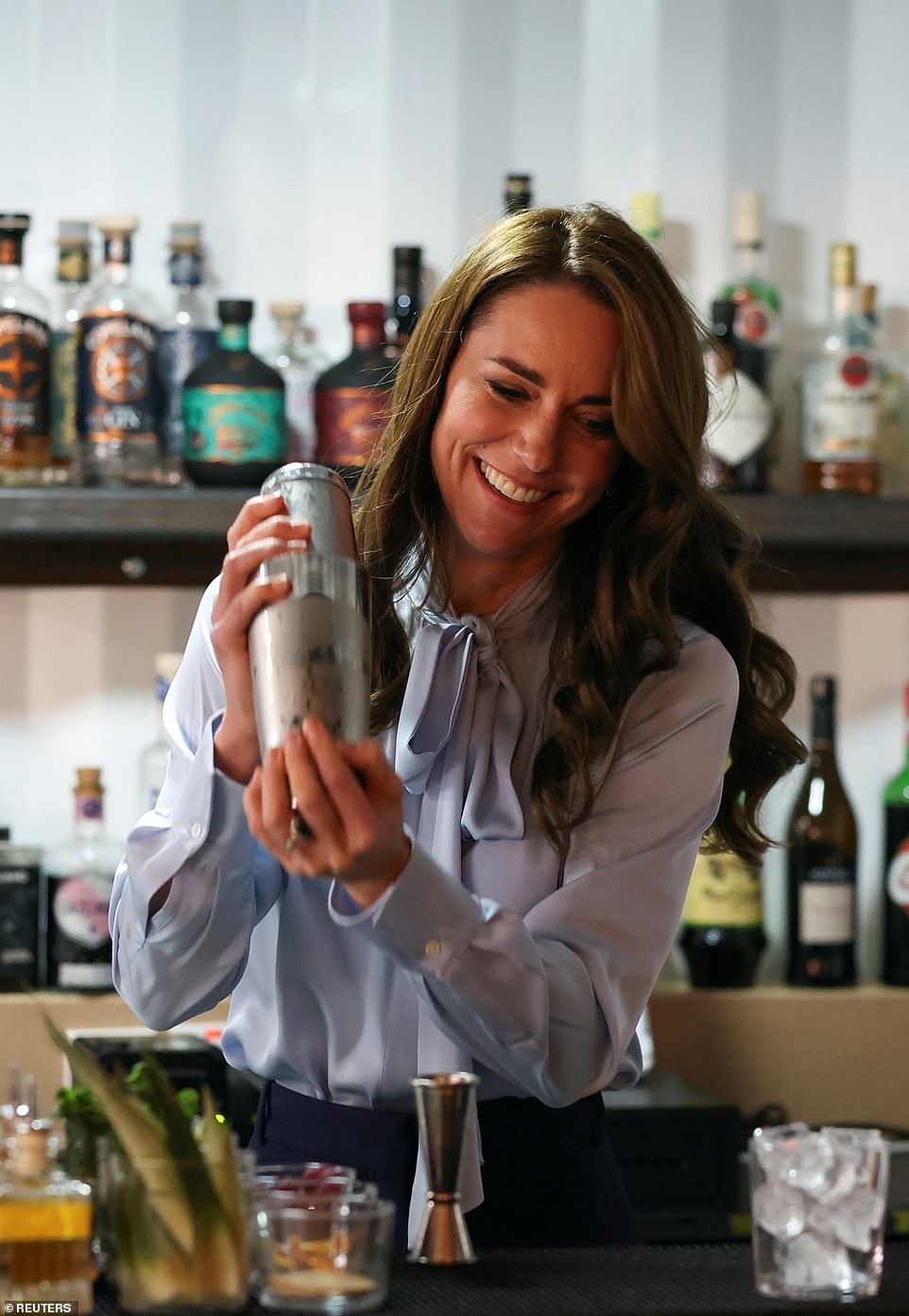 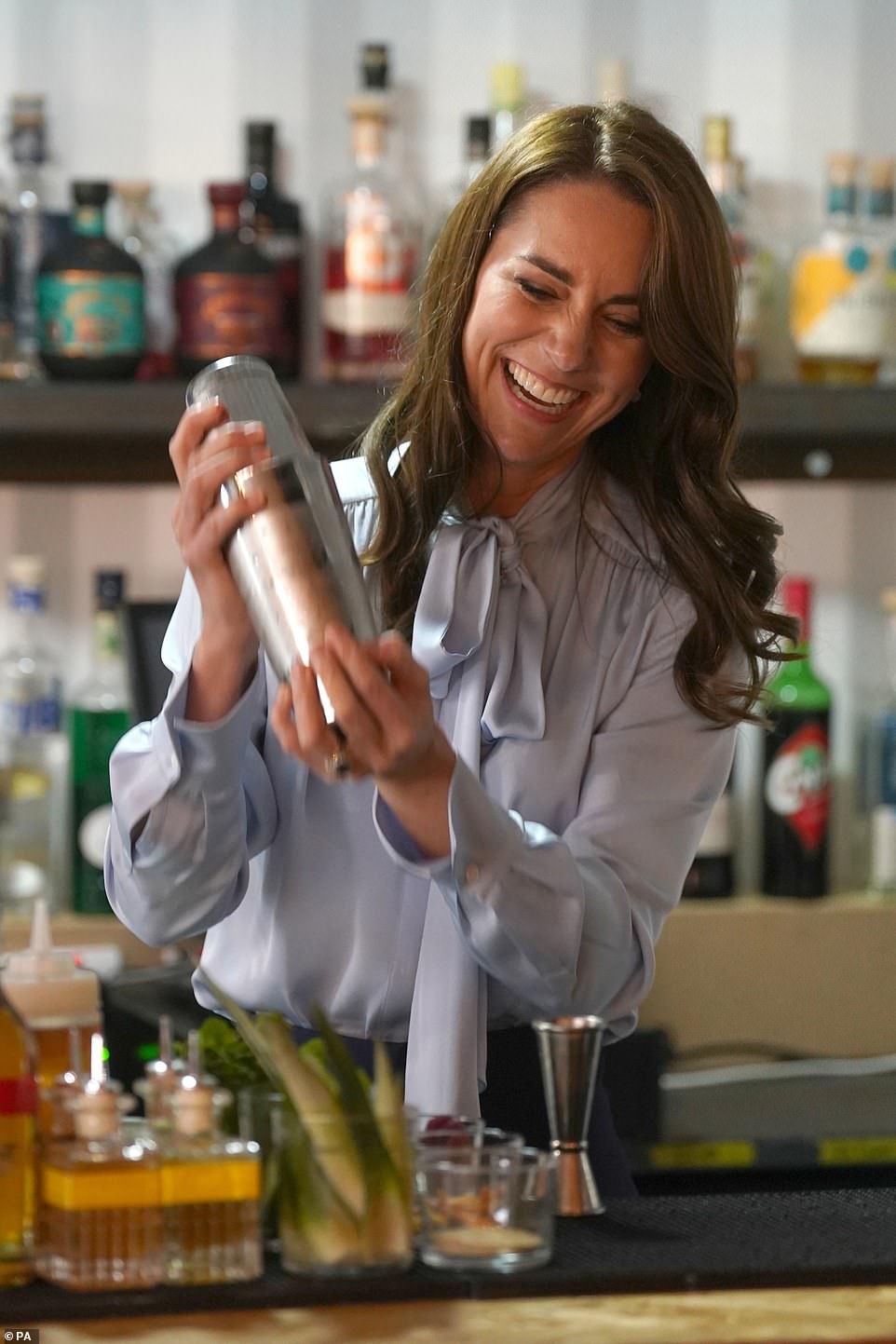 Somehow, despite shaking with all her might, barely a hair was out of place on Her Royal Highness’s head as she shook her Up the Lagan in a Bubble

This cocktail, an ode to Belfast, is shaken, not stirred, and requires a little bit of elbow grease to get it going.

Once you have measured out your ingredients into a cocktail shaker filled with ice, it’s time to put in some real effort in order to get the flavour combinations just right.

Somehow, there wasn’t a hair out of place on Her Royal Highness’s head as she shook her cocktail together behind the bar as she got to work mixing up her cocktail.

The Princess of Wales kept her cool as she shook her Up the Lagan in a Bubble and didn’t let the pressure get to her while her husband William attempted his own version of the cocktail just metres away.

Pour over ice and toast your creation 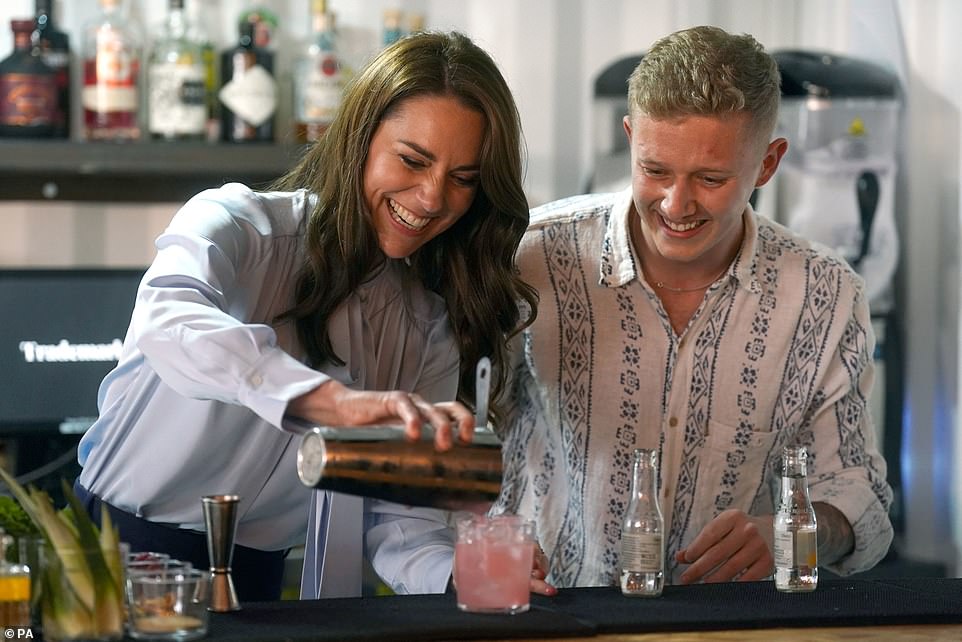 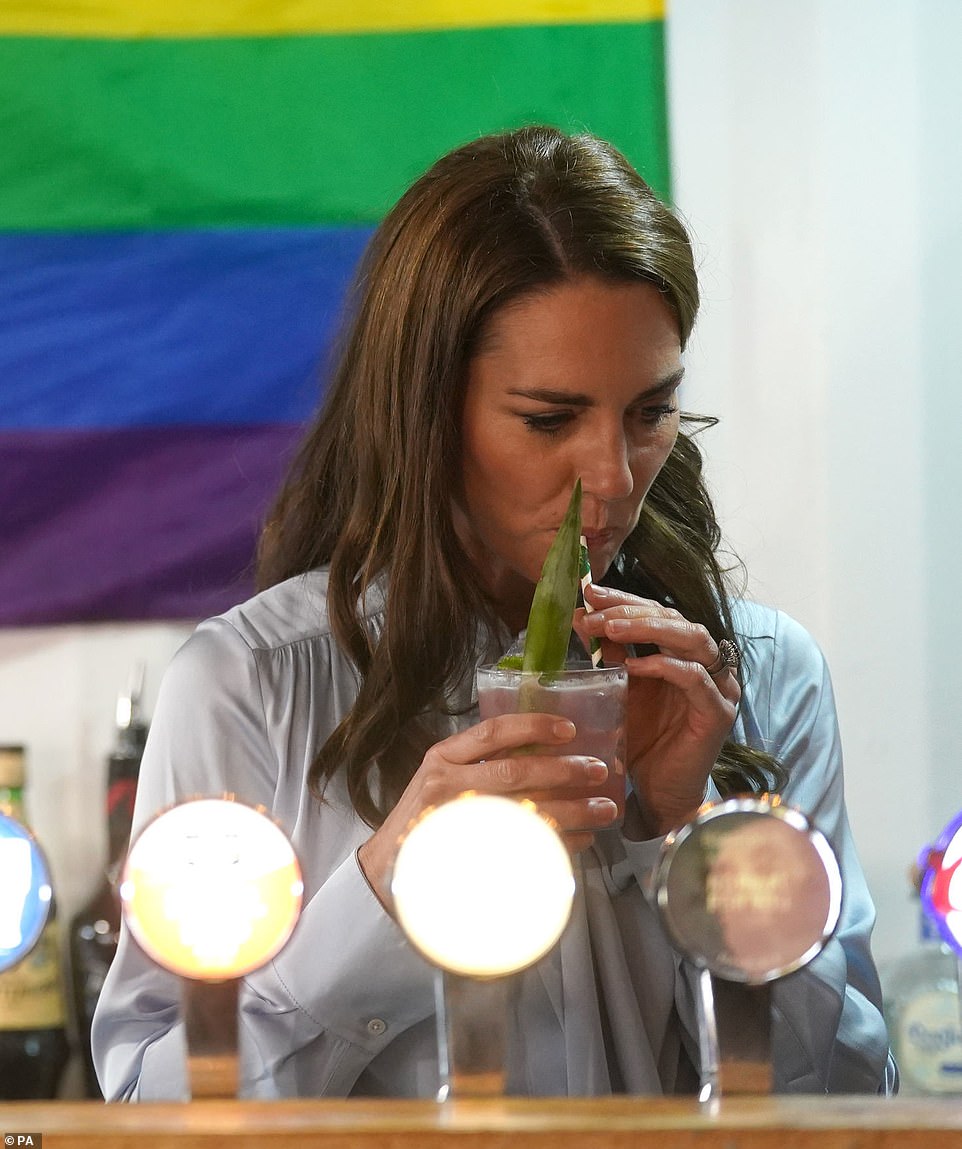 Garnishing her drink with a leaf and sipping through a straw, Her Royal Highness enjoyed a sneaky taste of her cocktail while no-one was looking 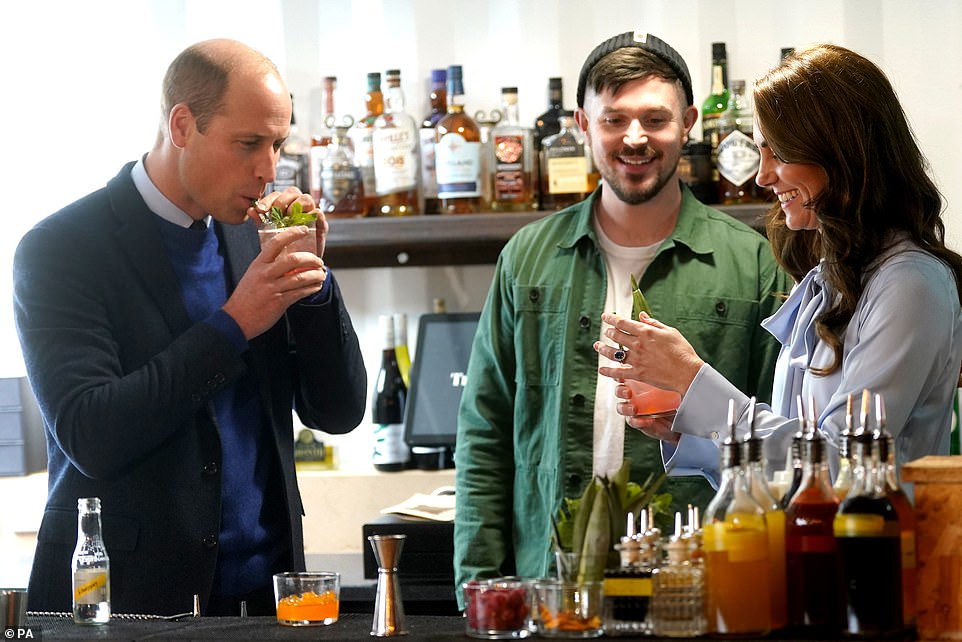 Make sure you have a short glass filled with ice ready for your freshly-shaken cocktail.

Then place a strainer over the cocktail shaker to make sure only your delicious nectar is being poured out, and garnish the glass with whatever takes your fancy.

Don’t forget to say cheers and enjoy your drink with your nearest and dearest.

The Princess of Wales put competition aside and showed her grace yeesterday as she happily toasted with her husband, Prince William, despite having just lost out to his version of Up the Lagan in a Bubble.

She sipped on her cocktail as she chatted to the bar owners with a grin on her face. 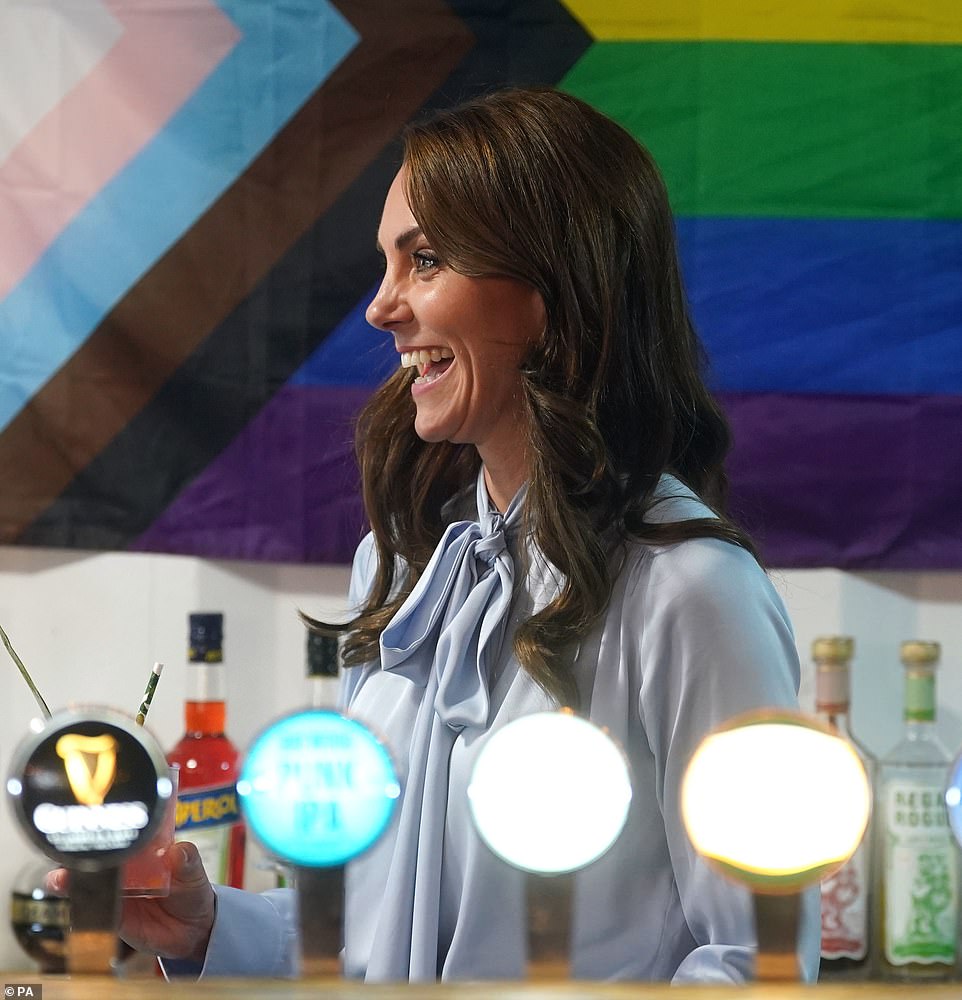 The Princess couldn’t wait to taste her cocktail behind the bar as she faced off with her husband, William, to see whose was better

The Princess of Wales looked completely at ease yesterday, despite being a novice in cocktail-making.

She beamed as she measured out her ingredients and shook them up, and keenly chatted to the owners of the bar.

Knowing her husband was at the other end of the bar competing against her only spurred on Her Royal Highness, who was delighted to take up the challenge.

She even smiled as she was declared the losing cocktail-maker, showing her grace and composure