A rubbish throw! Worker tries to lob trash bag into a skip – but it doesn’t go according to plan

A rubbish throw! Worker tries to lob trash bag into a skip – but it doesn’t go according to plan

This is the hilarious moment a bag of rubbish exploded over a cafe worker when he tried to throw it over his head and into a bin.

The clip captured the moment a group of workers took the bags of rubbish to two huge blue skips.

One man stood with his back to the bin around 50 yards away before swinging it twice between his legs.

He then catapulted the tied bag over his head and straight into the large bin.

Another of the group then moved to take his place, swinging the heavy bag just once under his legs before attempting to throw it into the air.

But just as the bag was thrown over his head, it ripped, sending rubbish flying across the car park – and onto the camera operator.

The camera then rotated to show the filmer’s face – which was dripping with discarded tea. 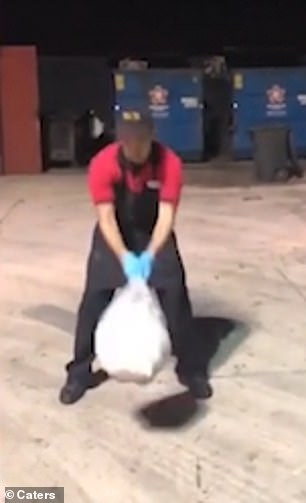 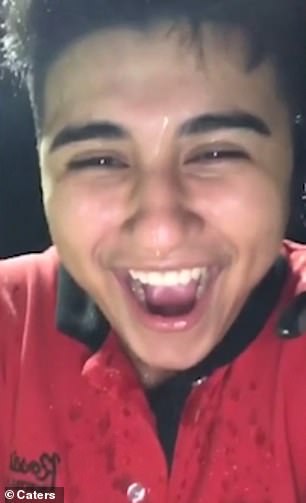 Desirae Lujam, who took the video in San Angelo, Texas, said they decided to make taking the bins out more interesting by attempting to throw the rubbish into a skip.

She said: ‘We were simply taking out the trash and I hate doing it so we decided to make it more interesting by seeing how far we could throw it.

‘The bin bag was full of old gloves that we use around the store and receipt paper as well as the tea.’