A schoolboy who suffered racist jibes from a classmate has revealed how he feels overwhelmed after the other boy ended up being expelled.

Taking to Reddit to reveal his worries surrounding the situation, the young British boy of Indian descent asked if he was wrong to admit to a teacher he felt offended, rather than discussing it privately with the other boy.

The anonymous youngster revealed that after a string of remarks, the new  boy – who he named Cory – shamed him for not being able to answer a question in maths class, and said the ‘entire nation of India is weeping’.

When a teacher asked if he was offended, the boy admitted that he was, knowing that it would result in Cory’s expulsion, due to the school’s strict anti-racist policies.

Commenters on the post came out in support of the schoolboy, labelling Cory as a disgrace while many others were also outraged at the way the teacher handled the situation by putting the onus on the victim to speak up.

The schoolboy, who revealed he had never been treated poorly during his time at school explained how things changed when Cory joined, ‘This new white kid comes in, and immediately we don’t get along well. It’s a relatively small school, and as such when someone does something bad, they quickly and effectively get ostracised for it.’

‘Now, our first interaction already made me dislike him. He says that I’m short for a Brit, and then he says “Oh it’s probably the Indian genes that make you short”.

‘People are already kinda uncomfortable and someone points out how I’m still very fit and I’m only slightly shorter than average. He sees this, starts touching me, and goes, “Wow you must bat very well”. And then he goes on to assume I play cricket.’

Then came the incident in maths class when he struggled to answer a question and Cory started mocking him, saying: ‘Do you know the answer. Come on man, channel that Indian brain, do your forefathers proud.’ 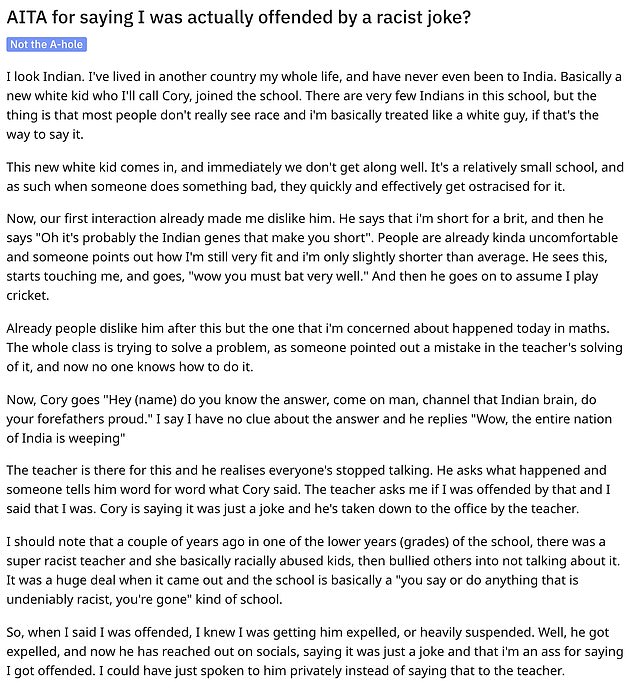 A schoolboy questioned on an ‘Am I The A*****e?’ forum about whether he had been in the wrong after receiving racist comments

When the boy said he had no clue, Cory replied: ‘Wow, the entire nation of India is weeping’.

The teacher who witnessed the comment and the reaction from the class, asked someone to repeat what Cory said word-for-word, and then asks if the unnamed boy had been offended by the comment.

When the boy said that he was, Cory was sent to the headteacher.

The boy then explained that the school had previous experience with racial abuse that had contributed to a new zero tolerance policy.

‘I should note that a couple of years ago in one of the lower years of the school, there was a super racist teacher and she basically racially abused kids, then bullied others into not talking about it.

‘It was a huge deal when it came out and the school is basically a “you say or do anything that is undeniably racist, you’re gone” kind of school.’

‘So, when I said I was offended, I knew I was getting him expelled, or heavily suspended. Well, he got expelled, and now he has reached out on socials, saying it was just a joke and that I’m an a** for saying I got offended. I could have just spoken to him privately instead of saying that to the teacher.’

After the schoolboy asked whether the situation made him out to be the A*****e, commenters flew to his defence.

One person wrote, ‘ Not only a racist but an extremely brazen and confident racist. He either doesn’t know (how?) that it’s clearly unacceptable or more likely has spent his life around people who feel no need to hide their blatant racism.’

‘The kid needs to learn soon that this doesn’t fly or the ramifications in adulthood for this behaviour will be severe. This is in the UK so the kid broke the law with that, he committed an actual hate crime. He’s lucky he just got expelled.’

Another person who sympathised with the schoolboy spoke up, ‘Casual racism is still racism. That kid got what he deserved, and frankly, something tells me he’s gonna say something like that to the wrong person and they’re gonna make him regret it.’

‘You did the right thing. Never feel bad for standing up for yourself, or telling the truth about offensive things/behaviors.’

A third said, ‘It’s always “just a joke” when they get called out on it. That doesn’t mean it’s not every bit as racist as it sounded; it just means they want you to go along with them in enjoying their racism. I hope he learns from this, and I’m glad you don’t have to be subjected to him while he does.’

Many other commenters were also outraged at the teacher’s response to finding a racist remark had happened under their watch.

One appalled person wrote, ‘Your teacher is for putting you on the spot. It doesn’t matter whether you were offended. Racist is racist. Wrong is wrong. That he said it should have been enough to merit whatever punishment the school doles out for that kind of thing.’

Another person remarked that the schoolboy felt guilt because of the teacher, ‘[He] is traumatized because they made this his fault. Cory thinks the brown kid got him thrown out of school for a joke. The real racists here are Cory’s parents and the school.’

A third commenter agreed and though the situation should have been handled more carefully, ‘The teacher singled the victim out, and now it seems like it’s [his] fault the kid was expelled. In reality, it’s no one’s fault but the racist kid’s. Even if [he] had laughed along with the “joke”, it still should’ve been met with punishment.’