A single genetic glitch explains how Zika is so dangerous

A single genetic change that occurred in 2013 may explain how Zika acquired the ability to attack fetal nerve cells, causing a severe birth defect in babies whose mothers were infected while pregnant, Chinese and U.S. researchers have said.

Scientists have posited many theories about why Zika, a mosquito-borne virus that had been linked with only mild symptoms since its discovery in 1947, could suddenly be associated with thousands of cases of the birth defect known as microcephaly, as it was in Brazil in 2015.

That outbreak prompted the World Health Organization to declare Zika a public health emergency in 2016, and set off a scientific quest to determine whether Zika could cause microcephaly, a condition marked by small head size.

Zika is transmitted to people through the bite of infected female mosquitoes, from the Aedes aegypti mosquito (pictured) and the Aedes albopictus mosquito. These are the same mosquitoes that spreads dengue, chikungunya and yellow fever

These are the same mosquitoes that spreads dengue, chikungunya and yellow fever.

Zika will likely reach all countries and territories of the region where Aedes mosquitoes are found.

Several teams have already traced the virus circulating in Brazil and elsewhere in South America to a strain of Zika that had been quietly circulating in Southeast Asia for decades.

In the new study, published in Science, Ling Yuan of the Chinese Academy of Sciences and colleagues compared genetic changes in samples of the South American virus with one isolated in 2010 in Cambodia.

They created seven sample viruses, each with a single genetic difference from the Cambodian strain, and tested these in brains of fetal mice.

Although the viruses caused some degree of damage in all, those infected with a virus that carried a single mutation in a structural protein called prM developed severe microcephaly. That strain also proved more lethal to fetal brain cells.

The team estimates the genetic change occurred in May 2013, just before a French Polynesian outbreak of Zika in which the first cases of microcephaly and Guillain-Barre, a rare neurological disorder, were noted.

‘Our findings offer an explanation for the unexpected causal link of Zika to microcephaly, and will help understand how Zika evolved from an innocuous mosquito-borne virus to a congenital pathogen with global impact,’ Yuan and colleagues wrote.

One study author, Dr. Pei-Yong Shi of the University of Texas Medical Branch in Galveston, Texas, said other mutations also fueled the explosive epidemic, including one he and others reported on in May in the journal Nature that enhanced Zika’s ability to infect Aedes aegypti mosquitoes, which carry the virus. 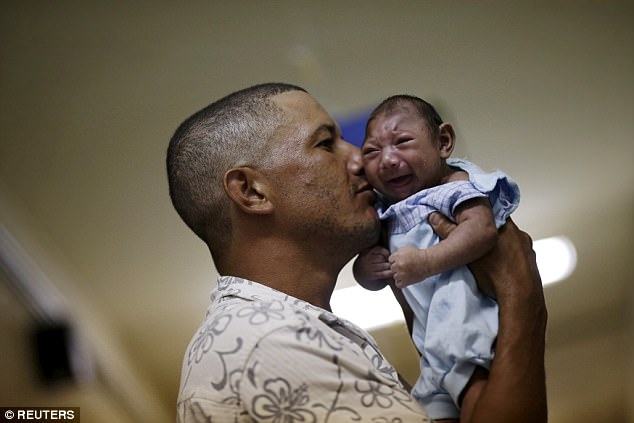 Geovane Silva holds his son Gustavo Henrique, who has microcephaly, at the Oswaldo Cruz Hospital in Recife, Brazil, January 26, 2016. A single genetic change that occurred in 2013 may explain how Zika acquired the ability to attack fetal nerve cells, causing a severe birth defect in babies whose mothers were infected while pregnant, Chinese and U.S. researchers have said.

Last November, WHO pronounced Zika no longer an international emergency, but stressed that the virus, found in at least 60 countries, will keep spreading where mosquitoes that carry Zika are present.

THE DANGERS OF THE ZIKA VIRUS

The CDC concluded that infection with the Zika virus in pregnant women is a cause of the birth defect microcephaly.

Microcephaly is a condition defined by unusually small heads that can result in developmental problems, and other severe brain abnormalities in babies.

The CDC said that since the causal relationship had been established, several important questions must still be answered with studies that could take years.

The World Health Organization in an updated assessment said the ‘most likely explanation’ is that Zika virus infection during pregnancy is a cause of congenital brain abnormalities including microcephaly.

It is investigating more than 3,030 suspected cases of microcephaly. 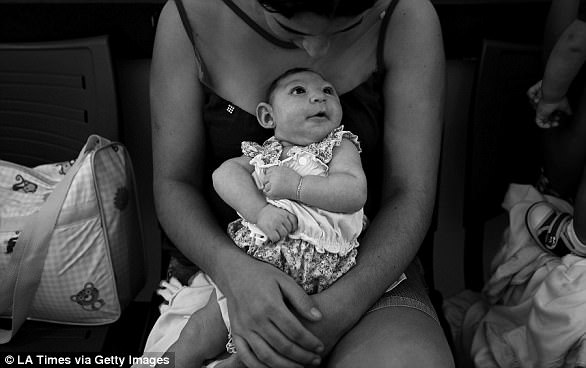 Zika virus in pregnant women is a cause of the birth defect microcephaly, which leads to unusually small heads that can result in developmental problems in babies. Pictured is Maria Silva Floa, 20, with her baby Maria Silva Alves, born with microcephaly

The WHO also updated its guidelines to say the infection is a trigger of Guillain-Barre syndrome (GBS), a rare neurological disorder that can result in paralysis.

Its previous statement, based on a rapid assessment of evidence, said there was strong scientific consensus that Zika virus caused GBS, microcephaly and other neurological disorders.