Britain at its best: A stately meander through the Peak District and the Derbyshire village of Pilsley

A night of celebration was at full throttle as I arrived in the Derbyshire village of Pilsley. The annual ‘well dressing’ had just taken place.

Well dressing — which entails decorating wells or springs with pictures made from natural materials such as leaves and petals — is a tradition that stretches back at least to the Middle Ages.

Pulled pork sandwiches were being served by the local pub and loud music played.

Gold Standard: Chatsworth House, which is only a few minutes from the Derbyshire village of Pilsley

Although the Peak District, of which Pilsley forms part, is one of the most visited of Britain’s national parks, village life has survived the pressures.

A clue to the health of the village lies in the name of the pub, The Devonshire Arms. Chatsworth House is only a few minutes away, and Pilsley is home to the famous Chatsworth Farm Shop.

The Dukes of Devonshire may not have created the rugged hill country, or the graceful Derwent River, but they did their best to improve them, employing the great landscape gardener Lancelot ‘Capability’ Brown in the mid-18th century and Sir Joseph Paxton in the Victorian period.

The house itself blazes with splendour, the window frames and urns coated with gold leaf.

It also contains a stupendous array of treasures — from Old Masters to opulent jewels, and the grandest of painted rooms to the most intricate limewood carvings in the form of birds and even lace. Twenty minutes’ drive away is Haddon Hall, another ducal property, this time the owner being the Duke of Rutland.

Gorgeously mellow and seemingly unchanged since the 16th century, it is one of the most romantic of Britain’s country houses, thanks in large part to a loving restoration by the 9th Duke in the Twenties.

Haddon and Chatsworth are both in the White Peak, or Low Peak, as the central and southern parts of the Peak District are known. The ‘white’ refers to the limestone of the geology. 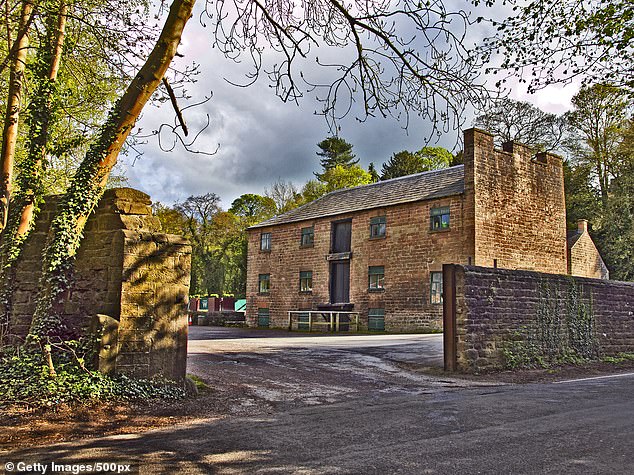 B&B doubles at The Devonshire Arms at Pilsley (devonshirepilsley.co.uk) start from £109 per night.

The scenery can be dramatic: above Matlock Bath, the Heights of Abraham, named after the cliffs above Quebec scaled by British forces under General Wolfe in 1759, are served by cable car; but the towns and villages look more cheerful than the settlements of the Dark Peak, built from millstone grit. The town of Buxton, with its Georgian Crescent, jaunty Edwardian Opera House and 23 acres of magnificent municipal gardens, has a decided spring in its step.

Meanwhile, early 20th-century children’s writer Alison Uttley described Cromford as ‘a misty blue little village of stone amongst the rocks and hills’ — though it may have seemed less idyllic to the workers in Sir Richard Arkwright’s Georgian cotton mills, which he built to take advantage of the swift-flowing river.

On the boundary of the Dark Peak, Castleton is the place to enjoy the Blue John that is mined there. The name derives from the French bleu et jaune (blue and yellow): concentric rings of purple or blue and white or yellow radiate across the surface of the polished fluorspar.

A wayside stone near Saltersford, in the Goyt Valley, remembers one John Turner, ‘cast away in a heavy snow storm in the night in or about the year 1755’.

Beside him, in the snow, was ‘the print of a woman’s shoe’.

Nobody knows who placed the stone there, or when.