First, it’s Mozart’s birthplace which is a treat for lovers of classical music as the city hosts daily concerts and a big summer festival.

Then there’s The Sound Of Music connection as Salzburg was also the setting for the 1965 film about the Von Trapp family, starring Julie Andrews. The film showcased the city’s baroque architecture and alpine scenery which may appear familiar.

Salzburg was the setting for The Sound of Music, which showcased its baroque architecture

The city’s also a manageable size – Salzburg has a population of just 150,000 and is compact, interesting and easy to explore over a weekend – whether you’re a music fan or not.

A few minutes’ stroll from the gardens of Mirabell Palace, Motel One is a well-priced hotel by the River Salzach. There are retro Sixties and Seventies touches throughout, including low-slung armchairs, while fake fires flicker on TVs in cosy rooms (ask for a river view). B&B double rooms start at £60.

This one’s full name is a mouthful: Star Inn Hotel Premium Salzburg Gablerbrau. It’s in a great location in the old town, with smart little rooms, recently renovated, in a 500-year-old building. A tiny cocktail bar with pink seats adjoins the reception, and the jolly Gablerbrau pub is next door. Double rooms start at £86 with breakfast an £14 extra per person.

Relax in the sauna after a hard day’s sightseeing on the Mozart and The Sound Of Music trails at this 140-room NH Salzburg City on a corner in the old town near Kapuzinerberg hill. Rooms are contemporary, with bold colour schemes. Breakfast buffets offer a good spread. Double rooms, with breakfast, start at £87.

WHAT TO SEE AND DO

Walk up a hill

It’s a mile-long hike through woods and past a Mozart memorial up Kapuzinerberg hill to Franziskischlossl, a fortress dedicated to St Francis. Visit franziskischlossl.at

Salzburg’s churches are both gorgeous and free to enter. Many are in baroque style, dating from when Prince-Archbishop Wolf Dietrich von Raitenau was in charge of the city (1587-1612). Salzburg Cathedral is simply magnificent, with a towering dome restored after World War II and the font where Mozart was baptised. 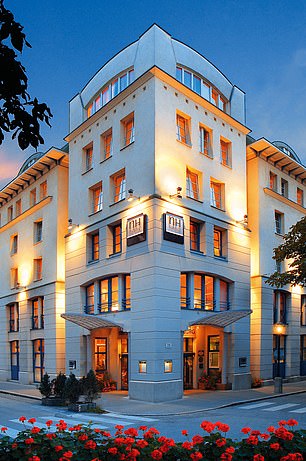 Pause for thought: The 140-room Hotel NH Salzburg City, set near Kapuzinerberg hill, offers respite, after a hard day’s sightseeing on the Mozart and The Sound of Music Trails

Visit the gardens at Mirabell Palace (where Do-Re-Mi was sung), Residenz Square (where I Have Confidence was sung) and many other spots. Tourist information centres have details. Four-hour guided bus tours from £39. Visit salzburg-sightseeingtours.at

Every morning at 6.45am, Benedictine nuns gather in the chancel of Nonnberg Abbey to sing Gregorian chants and pray. It’s free.

Get free entry to attractions including Mozart’s Residence, free public transport, funicular rides and trips on a cable car to Untersberg mountain. A 24-hour pass is £22, a 48-hour pass £29 and a 72-hour pass £34. Visit salzburg.info.

Former It-couple Elizabeth Taylor and Richard Burton are among the celebrities who have visited the Café Wernbacher since it opened in 1952. And the fifties-style diner still retains all the original touches. Ruby-red velvet chairs and booths are scattered around a central bar and the menu offers schnitzels, steaks and salads. Drop by for a bagel and a coffee/tea for £7. It’s right by Mirabell Palace.

On Saturdays, there’s a great selection of market stalls selling juicy frankfurters, currywurst hot dogs, giant pretzels and schnitzel chicken for £3. The pretzels come in apple, chocolate, nut and ‘pizza’ flavours, as well as salted. If you go at 4pm when the stalls are closing, prices may be reduced. The market is near Mozart’s Birthplace museum.

Founded by Augustinian monks in 1621, this is Austria’s biggest beer tavern, with four halls plus a beer garden seating 1,500. Stalls selling ham hock, sausages, cheeses and bread line the corridors. A piled plate is about £10, while a half-litre of beer is £2.80. In the evening — and often earlier — songs are sung to the ever-present clanking of beer mugs.

Near Mozart’s Birthplace, Triangel is a small restaurant with booths, that is popular with artists, writers and politicians. Waiters wearing lederhosen serve schnitzels and goulash while jazz plays and diners chatter and it’s a highly convivial spot. Expect to pay £28 for a steak. Fish soup and a glass of wine for £8.50 is better value. 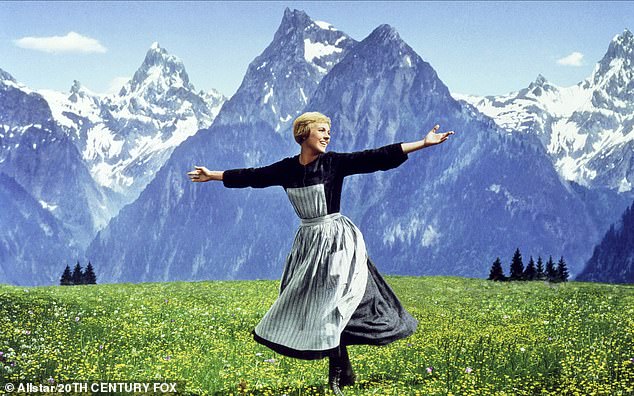 The hills are alive: Salzburg is a magnet for fans of classic film The Sound Of Music, above

The Museum of Modern Art’s main restaurant — with brilliant cliff-top views — has pricey main dishes  costing about £24. Instead, you could have a drink in one of the cosy leather armchairs at the bar. A coffee is about £3.40, a beer about £4.50 and a glass of wine £4.20.