We are standing on the battlements of Pena Palace, a magnificent 19th-century folly on a peak in Portugal’s hilltop town Sintra, which commands dizzying views of the Atlantic and the westernmost point of Europe.

Once upon a time this really was the edge of the world, before the discovery of India and the Americas. Now the area is renowned for its extravagant architecture, where tastes have been pushed to their very limit.

Pena Palace, with its golden Islamic domes, crenellated pink towers, Moorish gateways and Gothic arches, is a vulgar mash-up of styles designed by Prince Ferdinand of Saxe-Coburg and Gotha, nephew of mad Ludwig.

Family playground: The Martinhal Hotel in Cascais, Portugal, has 72 rooms and 12 villas

The effect is part Dali, part Donald Trump. My son, Rafael, three, and daughter, Saskia, five, adore it and imagine Rapunzel might materialise at any moment.

When it comes to Shakespeare family holidays, my wife and I consciously uncouple. She’s a culture vulture who loves city breaks. I prefer slumming it by the sea. Never the twain shall meet.

Or so I thought until I visited the Martinhal Hotel in Cascais. Here you really can have the best of both worlds. From my experience in Portugal — and I come here a lot — there are family hotels, and then there are Martinhal family hotels. This latest one is a joy.

It is intimate in scale (72 rooms and 12 villas) and stylish in its Scandi execution. The philosophy is refreshingly simple: child-friendly eating hours, soft furnishings, no sharp corners.

They know how to pamper parents, too. At the Terraco restaurant, there is a discreet creche hidden behind shrubbery. This means we linger over three-course a la carte dinners while the children peel off whenever they get bored. Genius. 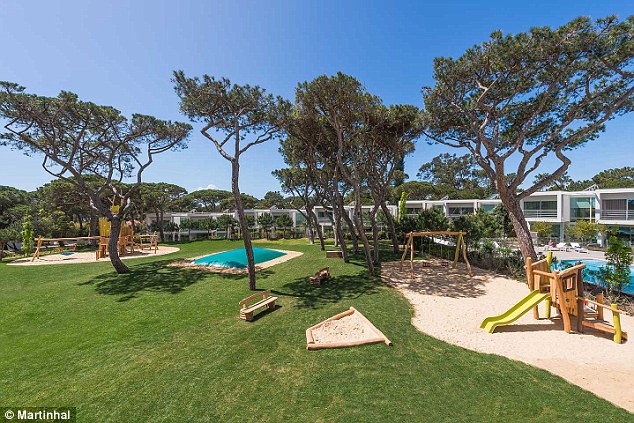 On the top-floor bar overlooking the playground, we guiltlessly drink a cocktail or three as our children race on the double zip wire.

With three outdoor swimming pools, one indoor pool and a spa, it is hard to tear yourself away from this modern-day Eden.

The nearby fishing village of Cascais was once the summer residence of the Portuguese royal family, and its quaint streets retain a languid charm.

There are ubiquitous reminders of its former royal status. The Sea Museum is on the site of Prince Carlos’s sporting club, and even in the Martinhal’s grounds there is one of Carlos’s old hunting lodges.

The town of Estoril is less picturesque, but is home to the casino that inspired Ian Fleming to pen his first Bond novel.

Mercifully, there is no need to hire a car as taxis are relatively cheap. Ten minutes away is the wild and windswept Guincho beach. The children are mesmerised by the giant Atlantic rollers and parasurfers gliding on the waves.

My wife and I, too, actually.

Travel Facts: Plan your own family escape to Portugal