A surrogate mother has revealed how traveling in an RV with her family is helping to fight off the baby blues.

Samantha Matthews 31, from Springfield, Massachusetts, lives with her husband Dan Matthews 34, a podcast host, and their two children Canyon, six and Ember four.

They are currently on the road travelling the US in a giant RV, following the birth of Sam’s first surrogate baby, also known as a ‘surro’ baby.

Speaking to FEMAIL, she said: ‘To beat the post partum blues we decided to go full time RV life to travel and spend time as a family and soak up time with our kids instead of thinking about delivering a baby that didn’t come home with us.

Samantha Matthews, 31, from Springfield, Massachusetts, lives with her husband Dan Matthews 34, a podcast host, and their two children Canyon, six and Ember four. They are currently on the road travelling the US in an RV, following the birth of Sam’s first surrogate baby, also known as a ‘surro’ baby 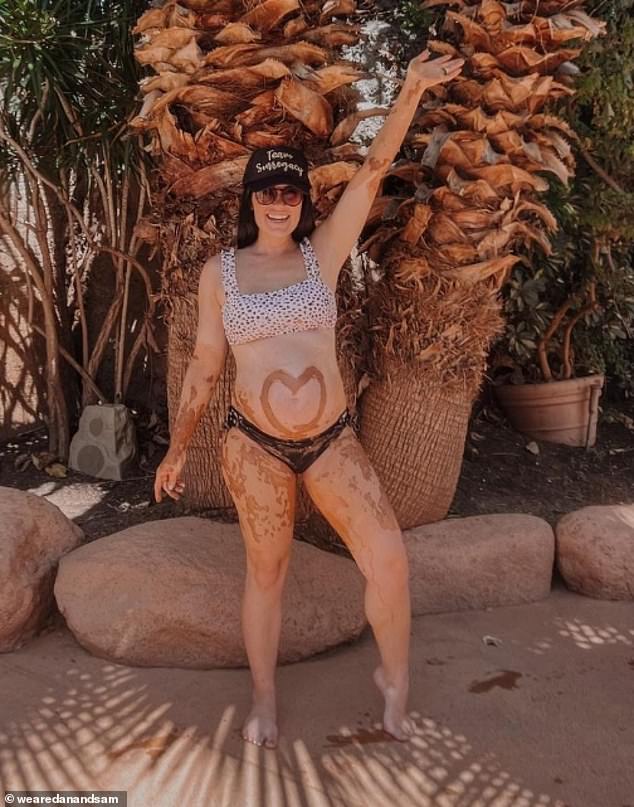 On Instagram and Facebook Sam, pictured while pregnant, shares her experience and recommendations for others who are curious about surrogacy and says women can go independent or with an agency

‘I am happy to say that I am doing really well emotionally and mentally since delivery so far.’

The couple started to look into surrogacy four years ago and began with an agency that connected potential mothers to intended parents.

It wasn’t without concerns, as they already had their own children and Dan in particular was worried about his wife’s mental health after the birth of the baby.

She told FEMAIL: ‘We just had our second child, Ember. Dan and I had a boy and a girl and we felt done having our own kids but I didn’t feel done being pregnant and laboring.

‘I mentioned it to Dan, we prayed about it and decided to move forward with the process.

‘Dan’s biggest reservation was how will I handle it postpartum and mine was how would the kids handle the journey, would everything medically go okay, but we felt a peace about doing it so we started our journey to surrogacy.’ 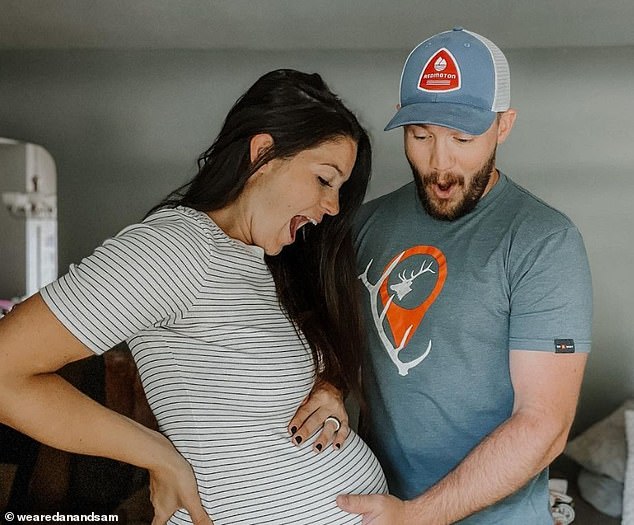 Sam with her husband Dan Matthews. They have shared their surrogacy journey on Instagram with thousands of followers after four years ago Sam decided she wasn’t ‘done with birthing and pregnancy’ 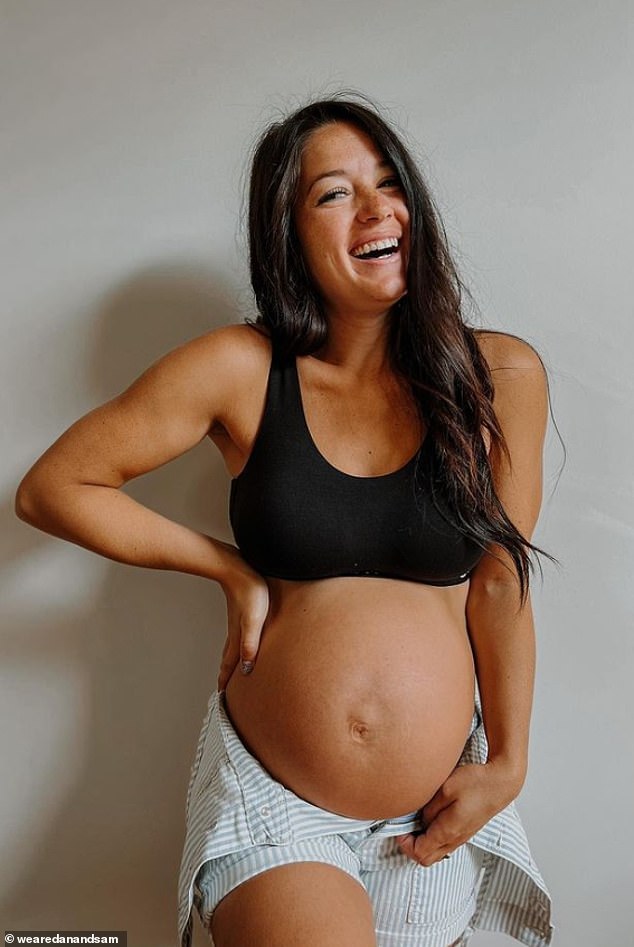 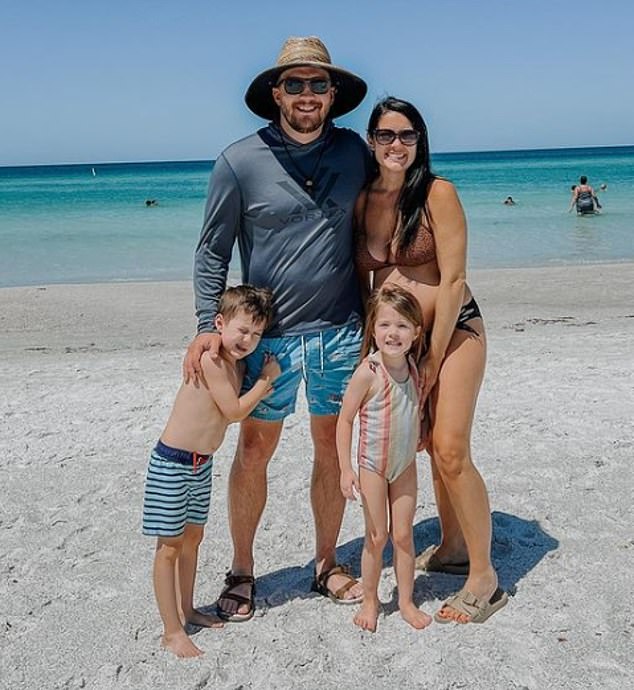 The Matthews are now living the RV life full time travelling the states. Dan and Sam are pictured with their son Canyon, six and daughter Ember, four on a trip to the beach

She continued: ‘We did a lot of prayer, research, and preparation for my postpartum emotional and mental state.

‘We knew from the beginning this was not our baby so at delivery there was no “second guessing”.

‘The baby had his parents there and that was never my role to fill and that was something I’ve made peace with.

‘We feel so honored to have been on this journey and we are humbled that God chose us to play that role in helping create a family for someone.

‘It’s such a rewarding feeling the moment the baby is delivered and the parents get to hold the child they waited so many years for. It was a moment we will never forget. 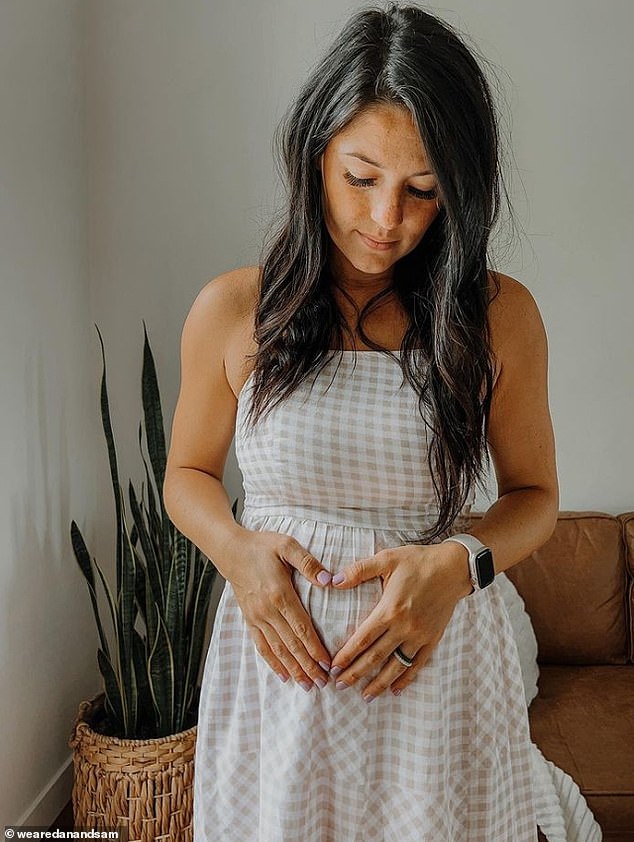 Sam during her pregnancy, she said she donated the milk after giving birth to another intended parent expecting a surrogate baby

Sam and Dan have documented the whole process on their Instagram page @wearesamanddan and are now sharing their lives post-partum and on the road.

During the pregnancy Sam shared the labor, birthing tips and how she was coping with tiredness in the third trimester.

The mother of two also gave tips on surrogacy and the routes people could go down if they were interested themselves.

She said: ‘You can go independent or with an agency and not everyone’s journey is the same.

‘The cons of going independent is less support through your pregnancy but it can be more costly for the intended parents. I share about my experience with both on my page. The very first agency I had I did not have a good experience with.’

Sam gets asked a lot on her Instagram page how she explained the surrogate situation to her children and she said on her Instagram stories: ‘It’s been suggested that a big family trip, which we are doing, and a gift “from the baby” helps them understand, both children were excited for the birth.’ 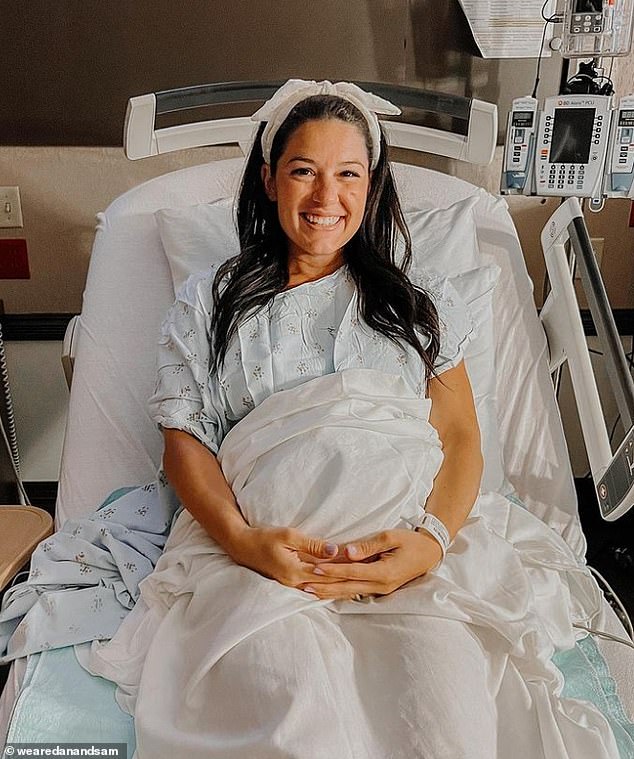 Sam in hospital after labor. She said: ‘To start, knowing that baby wasn’t genetically ours made a huge difference. This little one has a mom and dad who love them deeply. Seeing the joy on their faces from the moment baby entered this world was what this journey was all about’

When asked what happens to the the unused milk Sam reveals that she has pumped the milk out as she did with her own children and donated it to other surrogate parents, as the parents of the baby she has given birth to did not have a need for the milk.

She said: ‘I was amazed at what my body could produce, and we decided to donate the pumped milk to a family expecting a surro baby who needed it – as ours told us they didn’t.’

Sam and Dan are not currently in touch with their intended parents, who were present at the birth of the baby boy Sam was carrying, and ‘respect’ that decision.

They said: ‘It depends on the desires of both parties.

‘We did desire to have a close relationship with our intended parents after delivery as this process was such a big part of our lives, but we know surrogacy is a lot emotionally for the parents to take on and we understand that desires can change. 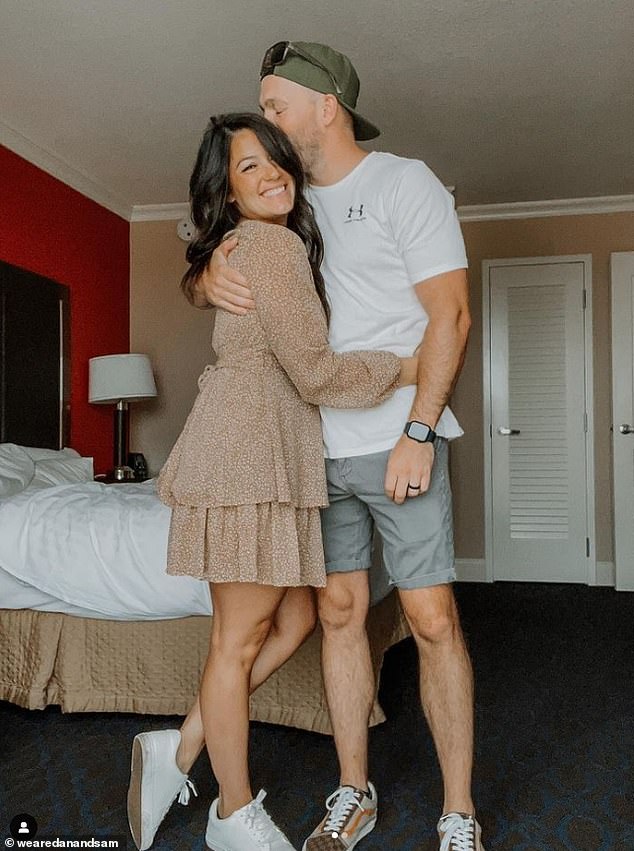 Sam and Dan, pictured, are not currently in touch with their intended parents, who were present at the birth of the baby boy Sam was carrying, and ‘respect’ that decision. At the moment they are focusing on their own family and exploring the world.

‘At this time we don’t think the parents want to stay in touch and we want to respect that decision.’

Sam has taken being a surrogate mother in her stride and gets ‘frustrated’ with some myths about the process.

She told FEMAIL: ‘People assume that a surrogate can’t handle handing the baby over.

‘At the end of the day we know this baby isn’t ours and that is why we are able to “hand baby over”.

‘It’s weird how you can compartmentalize feelings, but we know that baby was and always will be the intended parents we were just helping him grow and keep him safe for them.’