A tenth of landlords reaching retirement age expect income from their properties to be their biggest source of income for their pension years, despite tougher buy-to-let conditions.

The figure rises to one in five for those landlords who are self-employed.

According to the latest findings from the government’s English Private Landlord Survey more than half (54 per cent) of landlords in England are using buy-to-let properties as a ‘long-term investment to contribute to their pension’.

But research by Savills shows that a sizeable chunk consider buy-to-let investment as their main retirement income plan.

Despite the loss of tac relief over the past 5 years, over half of landlords still plan to use buy-to-let properties for long-term investment to contribute to their pensions.

Overall, landlords that have reached the state pension age are generating a net income of more than £10 billion a year, according to calculations by the property consultancy and estate agent.

Savills reckons that retirement-age households own 1,491,000 buy-to let-properties worth an estimated £437 billion. Once outstanding mortgages are deducted from that total, they add £378 billion to the net wealth of the households.

This has come off the back of house prices rising dramatically over the past two decades and a further surge occuring during the Covid pandemic. 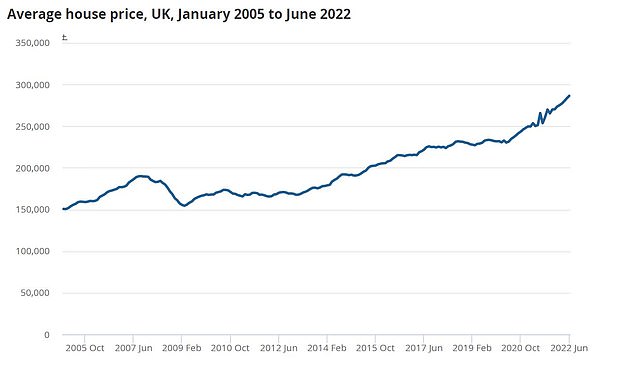 House prices in the UK have soared over the past two decades with the average house price now 78.2% higher than in 2015.

Yet, while house prices have climbed the landscape has got tougher in terms of tax in recent years and mortgages since last autumn.

‘Buy to let investment has been an attractive way to supplement or build up retirement savings over the past 20 years, especially for the self-employed’ says Lucian Cook, head of residential research at Savills.

‘Many are proclaiming that the golden age of buy-to-let investment is over because of increased regulatory requirements, a higher tax burden and the prospect of further increases in the cost of debt.

‘But it is set to play an increasingly important role in providing pension income, with many landlords, who were at the forefront of the buy-to-let explosion of the noughties, now hitting or approaching retirement age’. 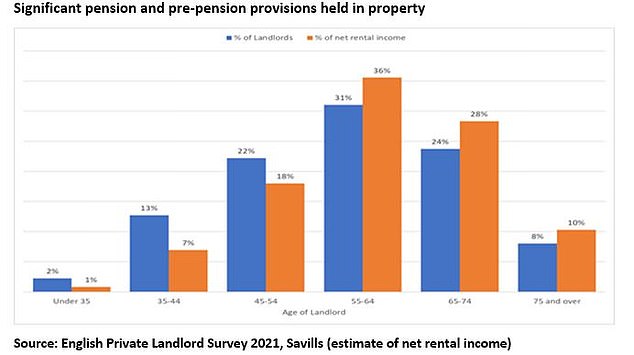 Retirement-age households own 1,491,000 buy-to let-properties worth an estimated £437 billion, according to Savills.

The findings come as landlords face an increasingly hostile environment. Between 2017 and 2020, the Government phased out tax relief on buy-to-let mortgages.

Previously, landlords were able to offset all of their mortgage interest against their tax bills.

This meant a landlord with mortgage interest payments of £400 a month on a property rented out for £1,000 a month would only pay tax on £600 of that income.

But this system was replaced and they now only get a 20 per cent tax credit — which is a blow to higher earners who pay 40 per cent income tax.

Coupled with increased mortgage rates as result of consecutive base rate rises from the Bank of England, landlord profits have been hit.

Mr Cook said: ‘Older landlords, in particular, have accumulated significant housing wealth through their investments. That means that they are in a good position to weather the storm as economic conditions toughen, being well insulated against interest rate rises.

‘As a result, they will be an important source of private rented accommodation for younger households, especially as more heavily leveraged Landlords find it more difficult to make the sums add up.’

Last month This is Money revealed that on average a buy-to-let landlord’s profit has halved since the start of the year.

Around 45 per cent of private tenants have seen their rent increase in the past year, says campaigning body Generation Rent. In London, they are up by 15.8 per cent. In Manchester, it is 20 per cent, according to data from property portal Rightmove.

A survey by membership body PropertyMark found that letting agents received an average of 127 new applications per branch in July — despite only having 11 properties available to rent.

It has led to aspiring tenants being urged to write personal letters to owners outlining why they should secure the property.

Many are even being told to pitch their offer above the asking price, an investigation by The Mail on Sunday found. Others are paying up to six months’ rent up-front.

Much of the problem stems from the fact lots of landlords left the market during the pandemic.

A shift to working and studying from home triggered an exodus from city centres, this meant many struggled to let out their properties — or had to do so at discounted rates. But now a reversal of that trend has seen a rush back to cities and demand outstrip supply.

Meanwhile, some landlords sold up altogether to cash in on their investments, or sometimes in protest at the Government bringing in new rules which made it harder to evict tenants during lockdown.

Landlords also potentially face a flurry of regulatory changes. In June, the Government published a white paper setting out proposals for a ‘fairer private rented sector’. It suggested giving renters the right to have a pet in their property — unless landlords had a justifiable reason for refusing.

And, controversially, the paper recommended imposing a ban on ‘no-fault’ evictions — meaning landlords would not be able to push a tenant out without giving them a reason.

If you are looking to buy your first home, move or remortgage, or are a buy-to-let landlord, it’s important to get good independent mortgage advice from a broker who can help you find the best deal.