Pluto might be harbouring an ocean underneath its surface, thanks to a layer of gassy material that would stop it from freezing over.

NASA spacecraft images of Pluto have shown the presence of an icy basin that experts think could overlie an ocean.

However, calculations suggest that any such sea should have frozen solid hundreds of millions of years ago due to the frigid temperatures on Pluto.

Researchers believe an insulating layer of gassy material may be keeping the ocean warm — a possibility supported by new models of Pluto’s evolution.

If these gassy insulating layers exist on other bodies in space, this could mean that there are far more potentially-life-supporting oceans in the universe.

Pluto might be harbouring an ocean underneath its surface (pictured), thanks to a layer of gassy material that would keep the subsurface sea from freezing over

Images of Pluto have revealed the presence of a white-coloured basin located near the equator, Sputnik Planitia, under which it is thought an ocean might exist.

However, calculations suggest that any ocean under the dwarf planet’s surface should have frozen over hundreds of millions of years ago.

To reconcile these two findings, an international team of researchers led from Japan’s Hokkaido University have suggested that the ocean might be covered by an insulating layer of gas hydrates that is keeping the sea from freezing solid.

Gas hydrates are ice-like solids in which tiny pockets of gas become trapped in molecular water cages, giving them a low thermal conductivity that could provide insulating properties.

To investigate whether such a gas layer could be keeping an ocean insulated, researchers simulated the thermal and structural evolution of Pluto since the solar system began to form 4.6 billion years ago.

They considered the cases where a gassy layer existed and where none was present.

Simulations revealed that Pluto’s subsurface sea would have completely frozen hundreds of millions of years ago if there was no gas hydrate insulating layer.

With this layer, however, the ocean would hardly freeze at all.

Researchers also found that the presence of a gas hydrate insulating layer would delay the formation of a thick, uniform ice crust over the ocean, making it take over a billion years than just around a million.

Because of this, the simulations support the potential for their being a long-lived liquid ocean underneath Sputnik Planitia’s icy crust. 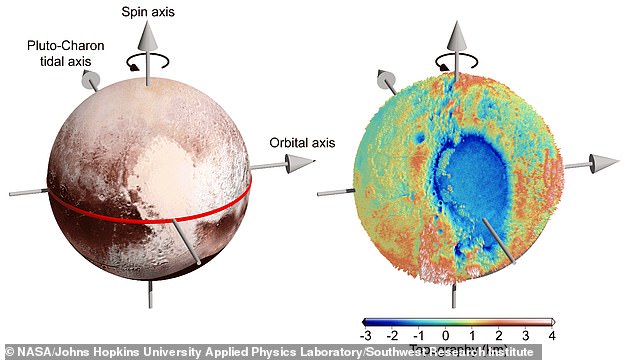 Researchers suggest now that an insulating layer of gassy material could be keeping the ocean warm — a possibility supported by new models of Pluto’s evolution (Pictured: a natural colour image of Pluto, left, with its topography, right. Sputnik Planitia can be seen on the equator)

The most likely gas held within this insulating gas hydrate layer would be methane, the researchers said, which would have originated from Pluto’s rocky core.

This would be consistent with the usual composition of the dwarf planet’s atmosphere, which is rich in nitrogen but methane-poor.

And similar layers of gas hydrate could be insulting long-lived, sub-surface oceans on other icy moons and other celestial bodies, researchers said.

‘This could mean there are more oceans in the universe than previously thought, making the existence of extraterrestrial life more plausible,’ said lead paper author and planetary scientist Shunichi Kamata, of Hokkaido University.

The full findings of the study were published in the journal Nature Geoscience.

WHAT IS PLUTO’S GASSY INSULATING LAYER? 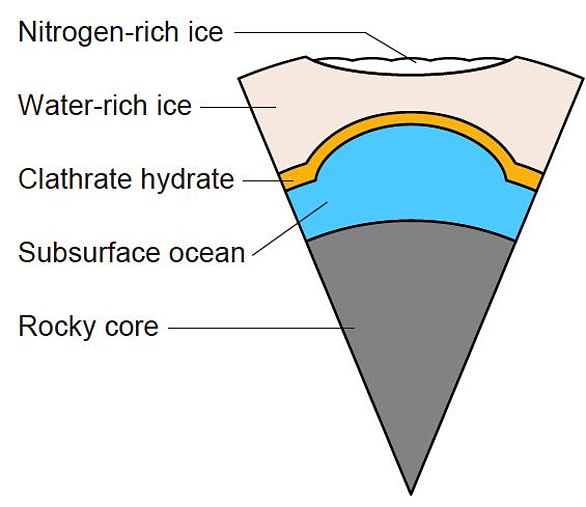 Researchers have proposed that a layer of gas hydrates might exist under Pluto’s icy surface, above a buried ocean.

These gassy materials are both very viscous and have a low thermal conductivity that provides insulating properties.

The most likely gas held within an insulating gas hydrate layer on Pluto would be methane.

This methane would have originated from Pluto’s rocky core.

This would be consistent with the usual composition of the dwarf planet’s atmosphere, which is rich in nitrogen but methane-poor.

A gas hydrate layer on Pluto would insulate any subsurface ocean, stopping it from freezing completely solid.