Family, said Diana, Princess of Wales, ‘is the most important thing in the world.’ From the moment she confided in her childhood nanny that her only ambition was to fall in love and have lots of children, to her final days with William and Harry, it was the philosophy she lived by.

It left a legacy of extraordinary pictures that – even two decades after her death – still speak eloquently about her relationship with her sons.

As Harry said last month: ‘She was the best mum in the world. She smothered us with love, that’s for sure. I miss having that mother to… give you those hugs and that compassion that everybody needs.’

Prince Harry and Prince William’s relationship with their mother, Princess Diana,  left a legacy of extraordinary pictures that – even two decades after her death – still speak eloquently about her relationship with her sons 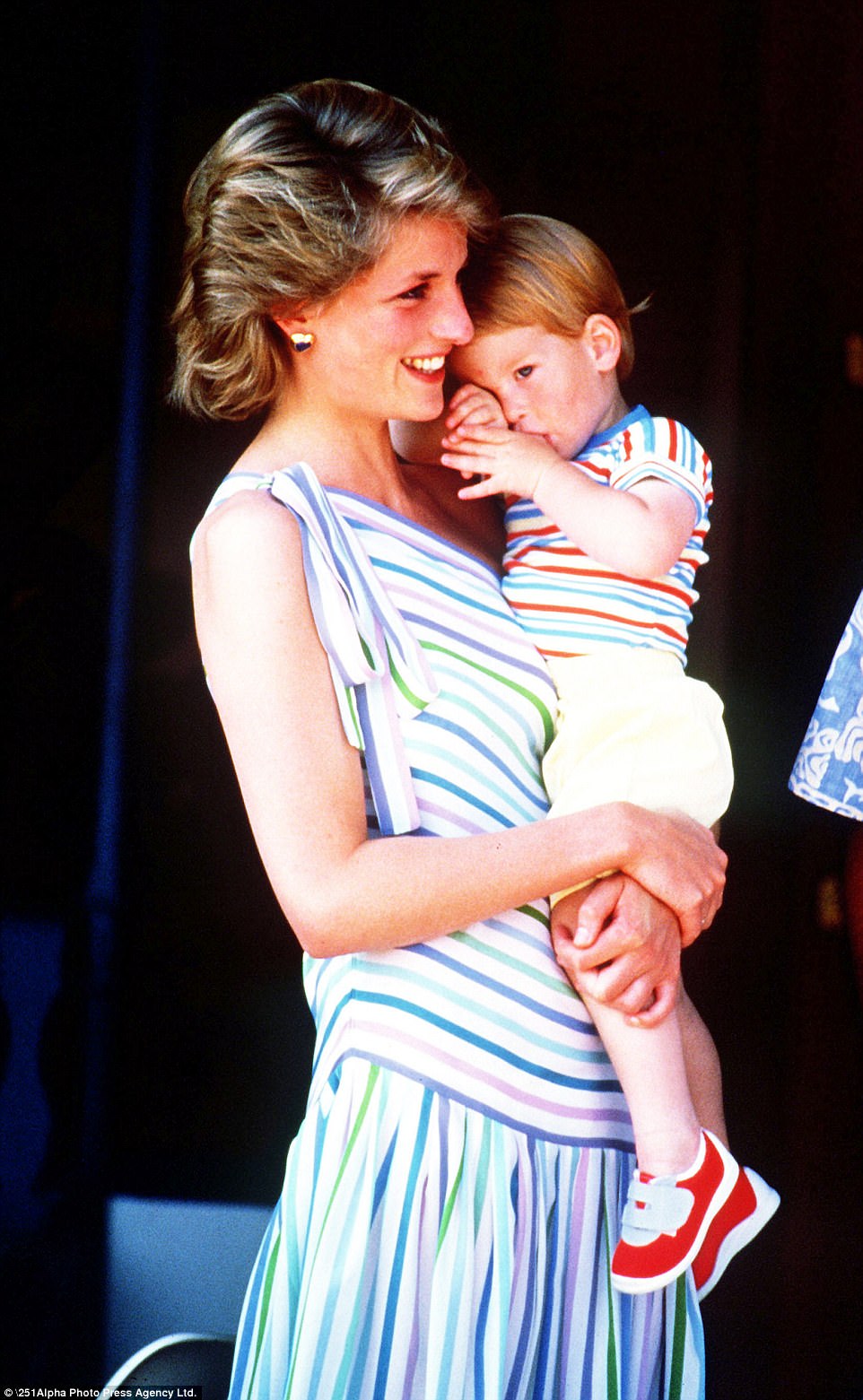 A sleepy two-year-old Harry sucks his thumb as he cuddles his mother during a 1986 summer holiday to Majorca. Charles, Diana and the Princes were the guests of King Juan Carlos and Queen Sofia of Spain 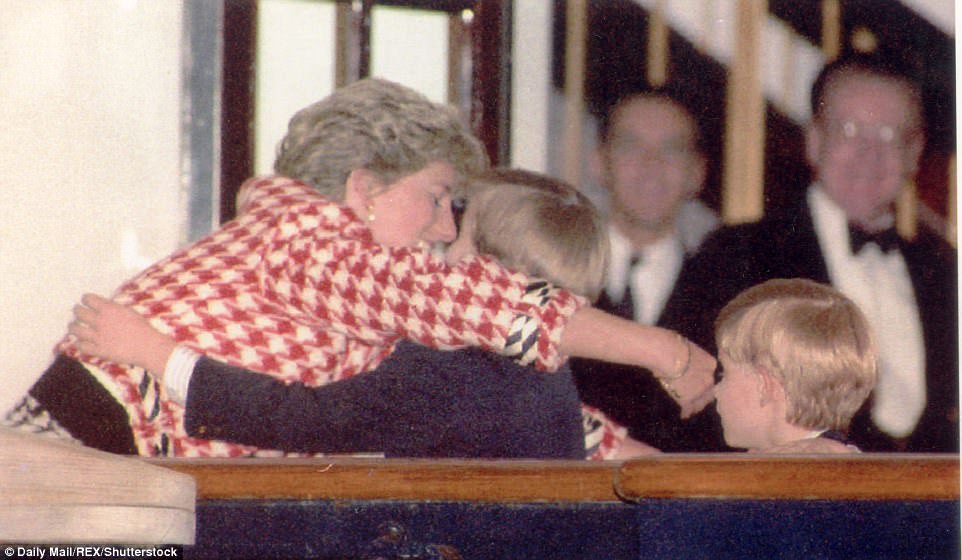 A delighted Diana is reunited with her boys on the Royal Yatch Britannia in Toronto in October,1991, during the family’s first ever overseas tour as a foursome. She enfolds William in her arms before smothering him in kisses

William added: ‘She was extremely good at showing her love, showing what we meant to her, what feelings meant and how important it was to feel. Even after 20 years, I still feel that love… that warmth which is a huge testament to her.’

This summer the two Princes have opened up to share their memories of their mother in a series of moving interviews in print and on television to mark the 20th anniversary of her death.

Their participation in ITV documentary Diana, Our Mother: Her Life And Legacy, broadcast last month, and tonight’s BBC special, Diana, 7 Days, has provided the most intimate portrait yet of Diana.

It is the first time the Princes have spoken in depth about her life and loss and, they say, it will be the last. 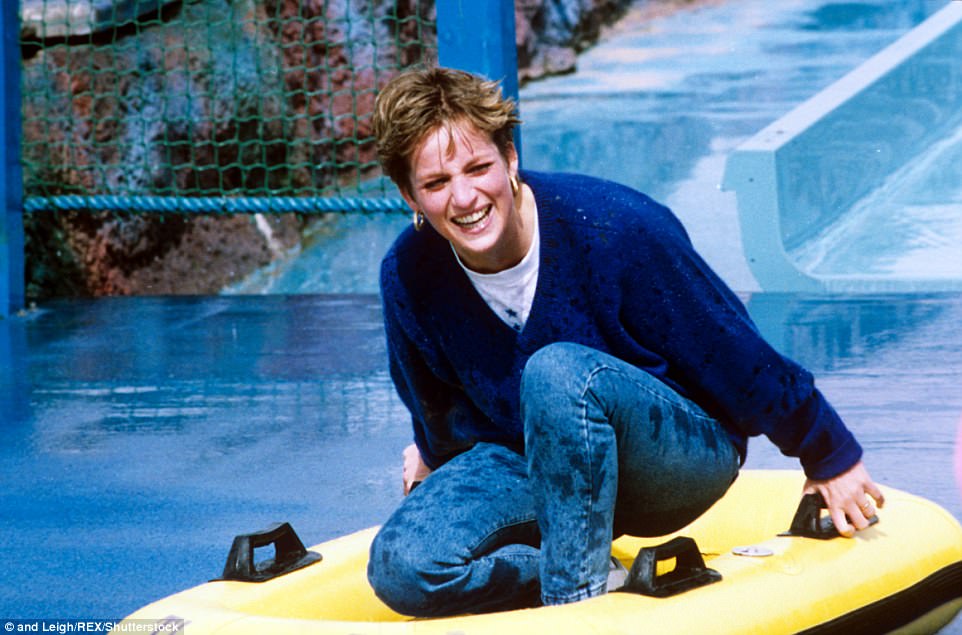 Diana’s playful side was especially on show during her annual visits to Thorpe Park in Surrey with William and Harry. She earned the respect of parents everywhere for taking them on the rides herself. Even if that resulted in a public drenching 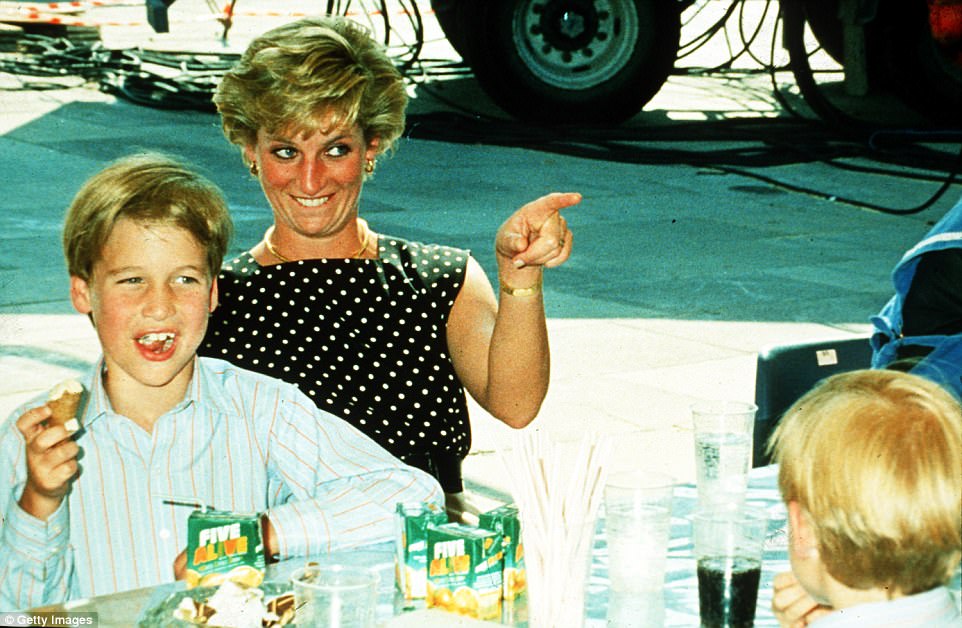 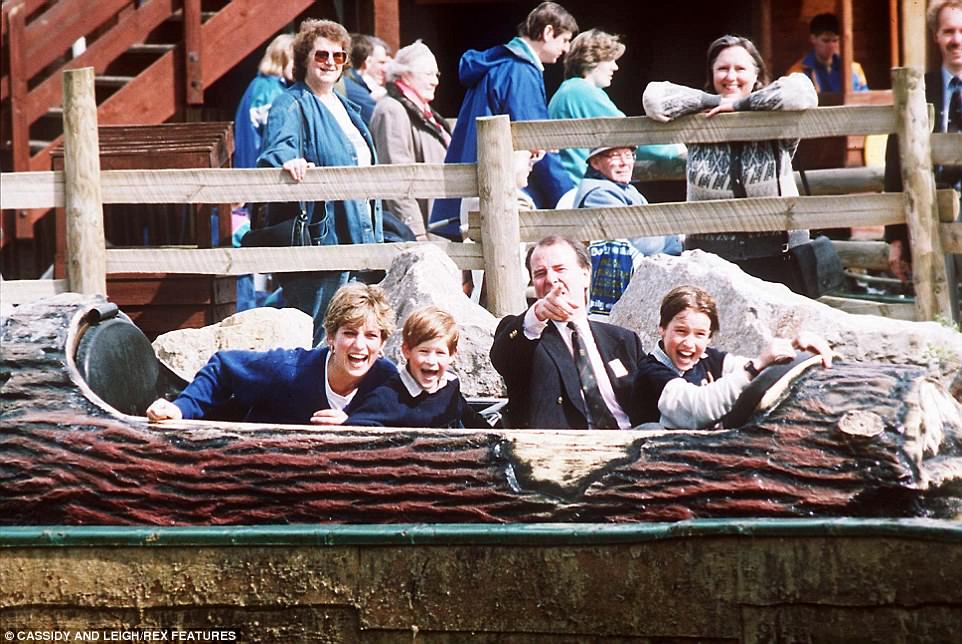 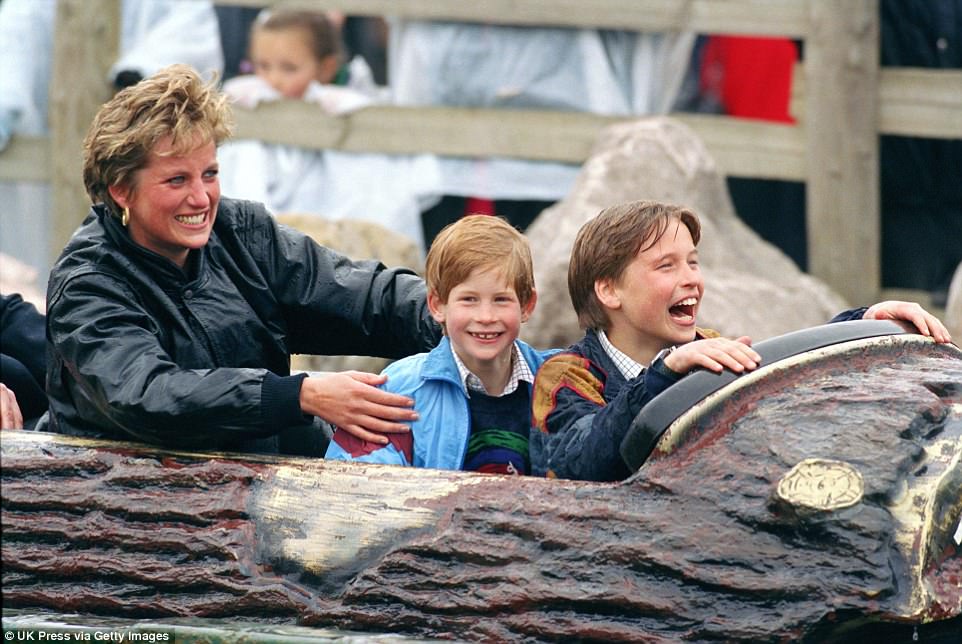 The trio return to Thorpe Park in 1993. The Princess was widely praised for insisting that William and Harry queue for rides such as Loggers Leap alongside other visitors 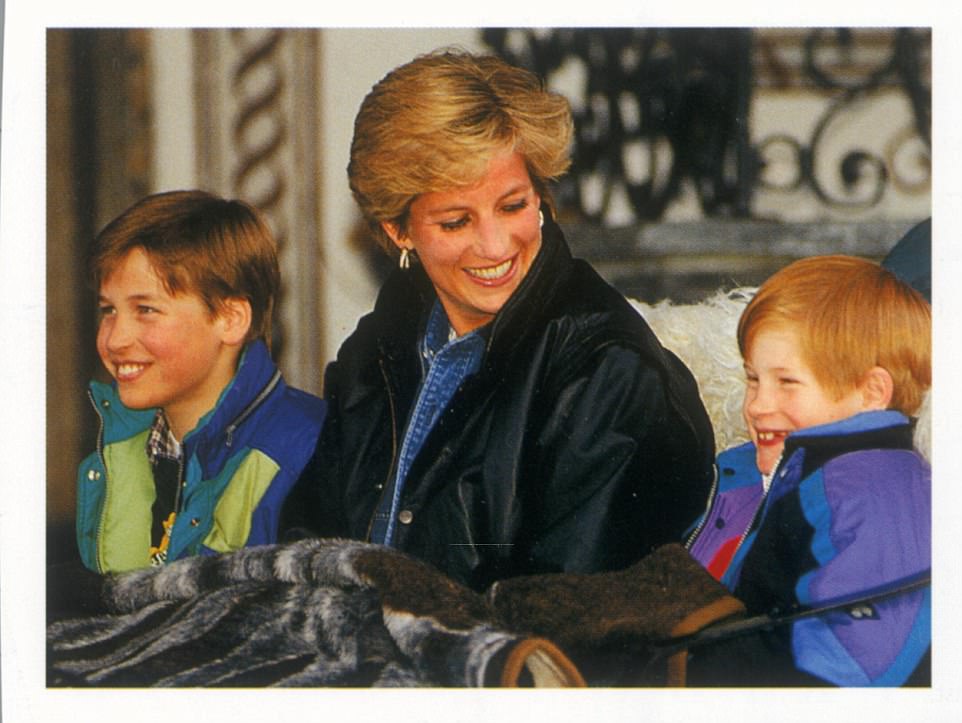 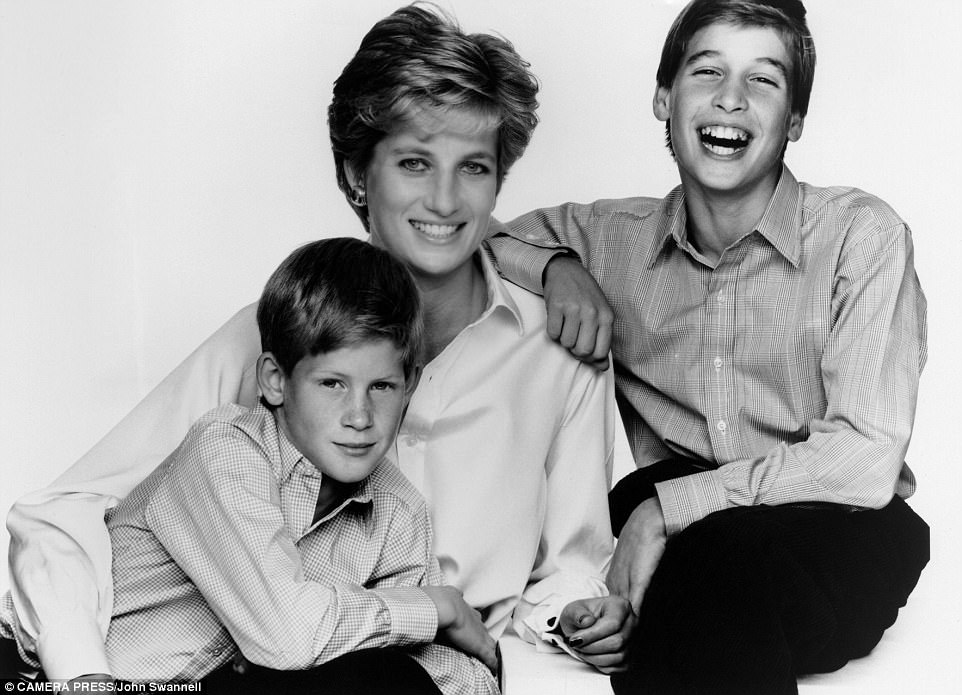 Diana loved these pictures, the result of a shoot with Royal favourite John Swannell. He had a table-tennis set up in his studio and remembers beating William but losing to Harry between shots. The Princess used a more formal photo taken of her as a 1994 Christmas card 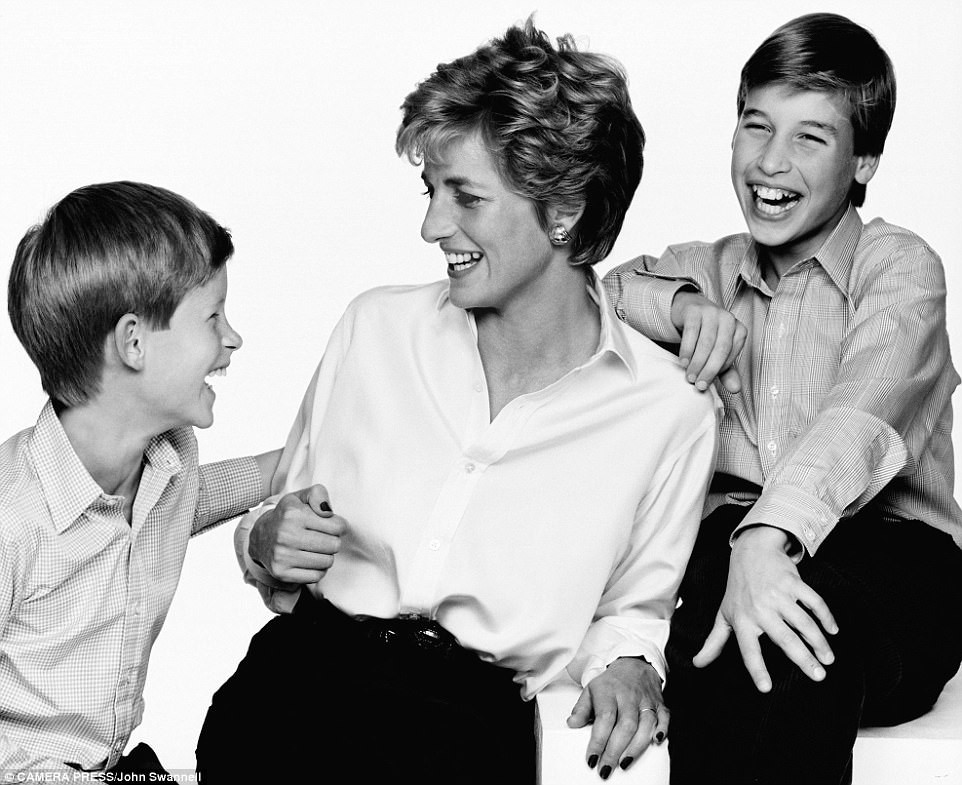 Prince Harry said: ‘ She was the best mum in the world. She smothered us with love that’s for sure’ 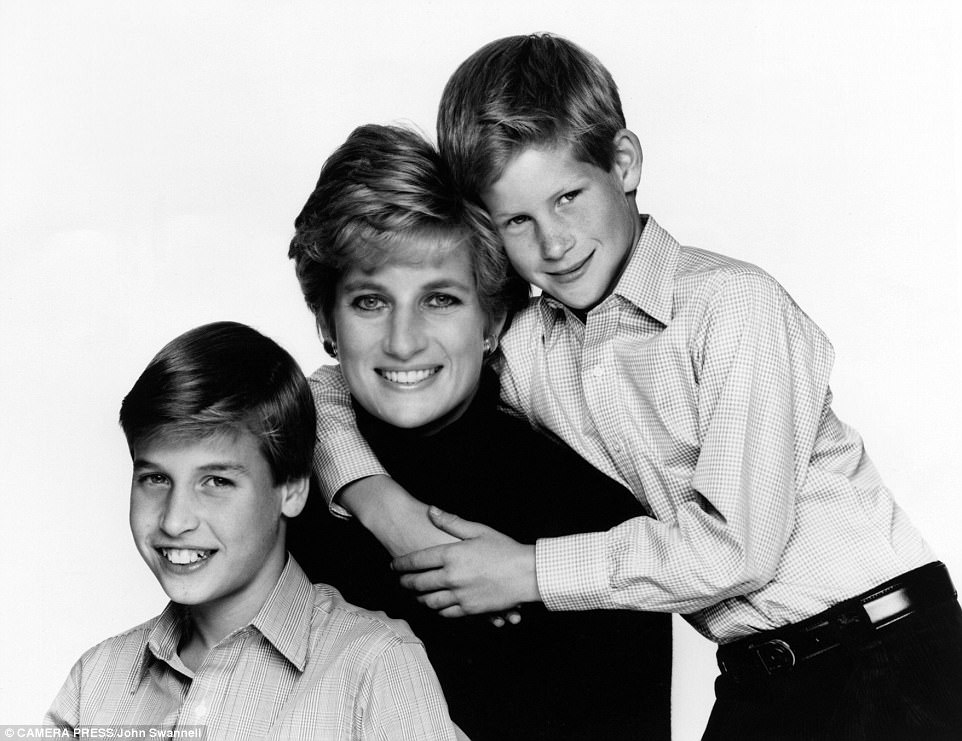 ‘It was that love that even if she was on the other side of a room, as a son you could feel it’, said Prince Harry

‘Part of the reason that Harry and I want to do this is because we feel we owe it to her,’ William tells the BBC. ‘I think an element of it is feeling like we let her down when we were younger. We couldn’t protect her.’

On the same programme, Harry adds: ‘It’s never going to be easy for the two of us to talk about our mother, but 20 years on seems like a good time to remind people of the difference that she made, not just to the Royal Family, but also to the world.’

What emerges is how hard they have tried to keep alive the Princess’s name and work, which they use as a paradigm for their own public service. 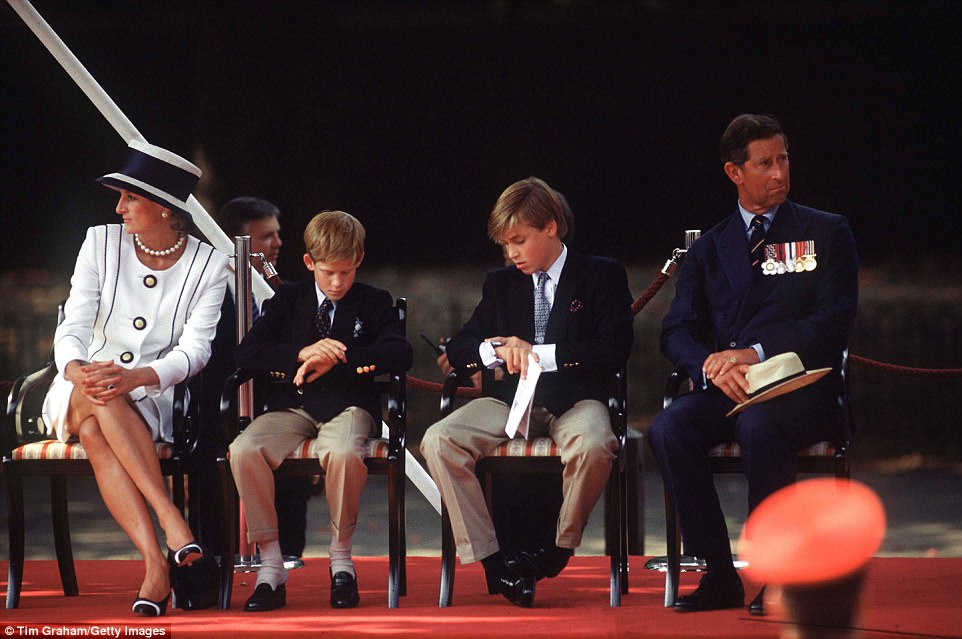 The young Princes count down the minutes until the end of their public duty as they watch a VJ parade on the Mall in 1995. It was just a few months before their warring parents, seen here looking glum in each other’s company, would officially seperate 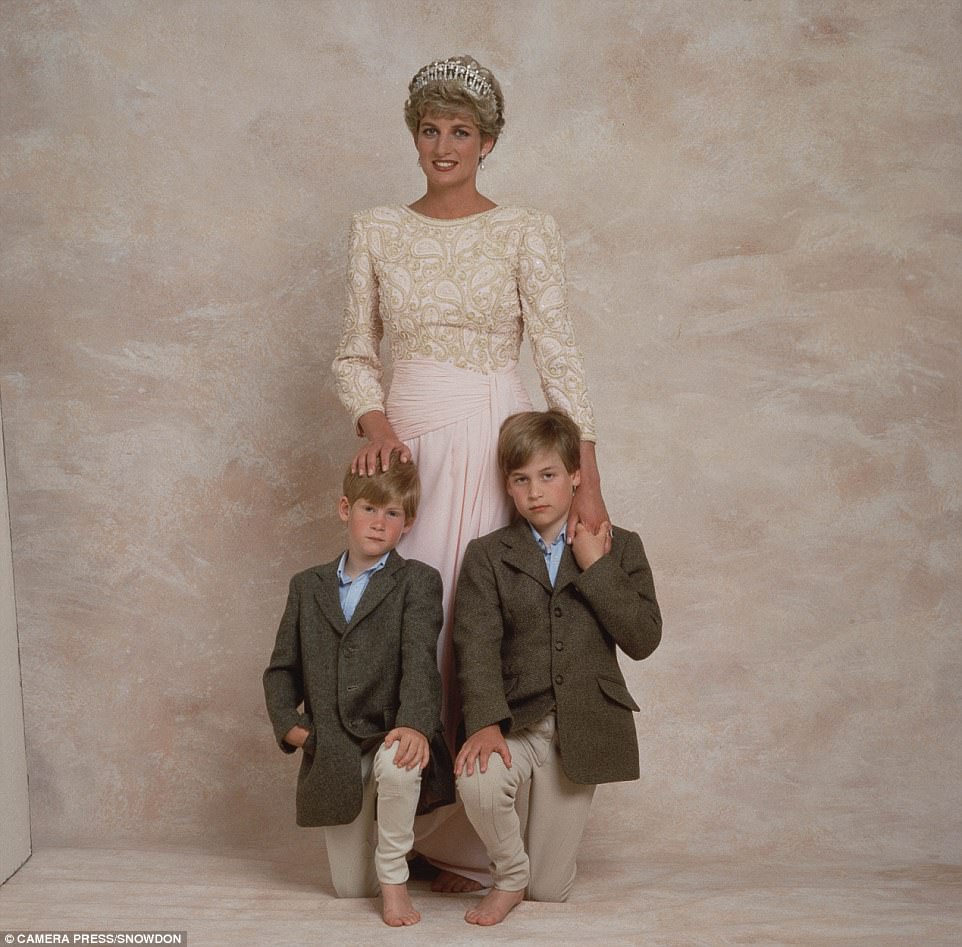 The Princess is barefoot in the bathroom with the Princes in riding jackets and jodhpurs, adding a quirky look to the formal 1991 portrait, taken by Lord Snowdon. She is wearing her favourite tiara, the Cambridge Lover’s Knot. 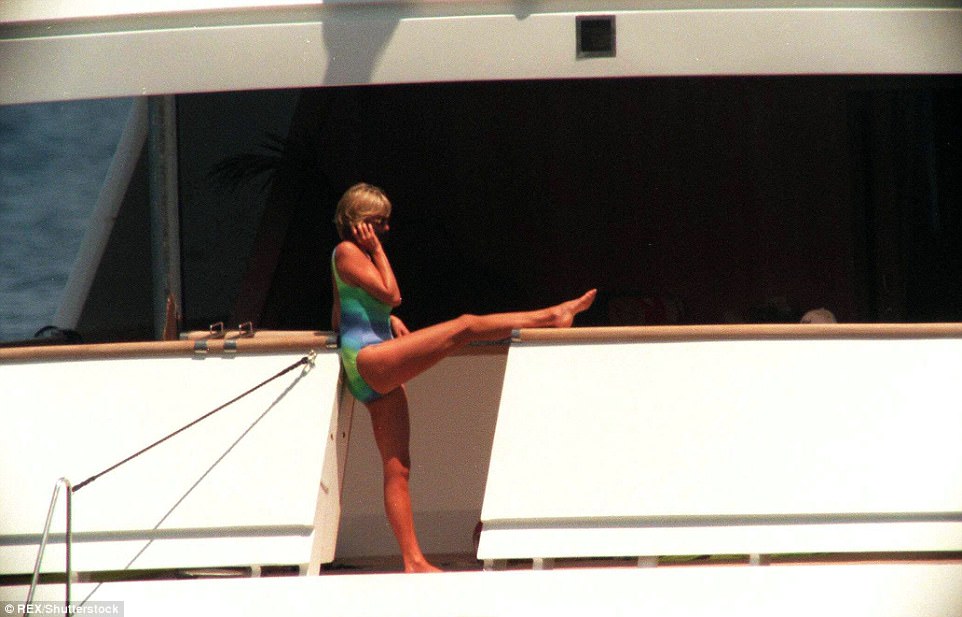 The Princess makes a phone call as she performs a ballet stretch on Al Fayed’s yacht, the Jonikal in July 1997 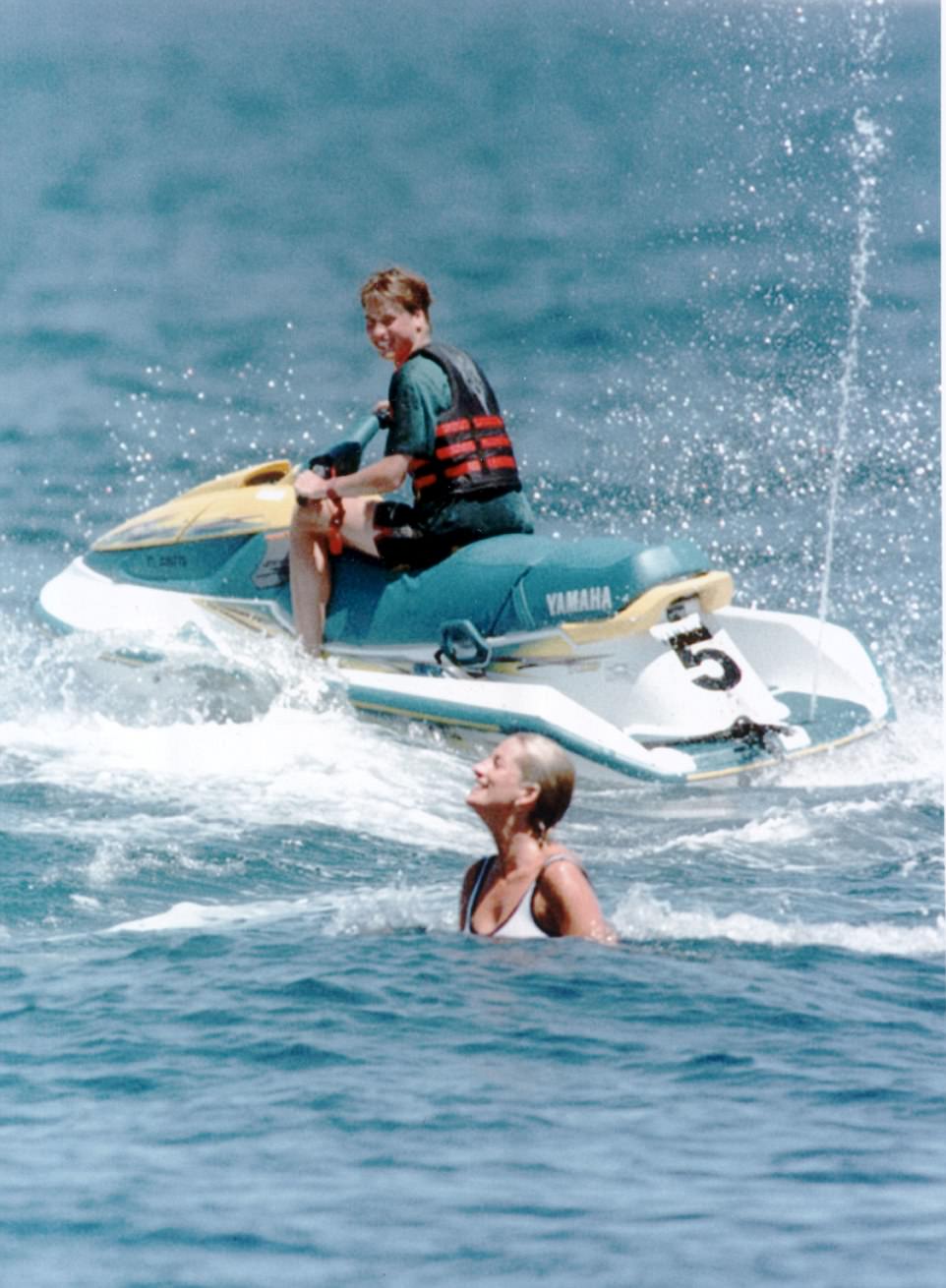 Diana’s last days of fun in the sun with her boys in July 1997. At Mohamed Al Fayed’s home in the South of France, Diana watched William enjoy a thrilling jet-ski ride and shared tender moments with Harry 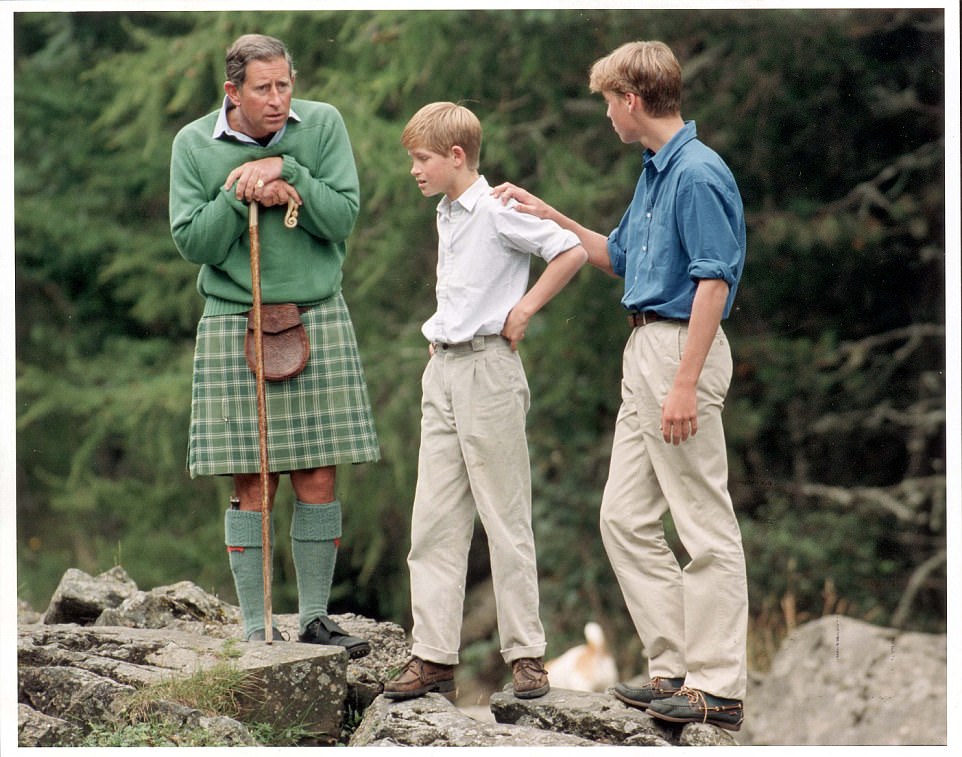 William and Harry with their father at Balmoral just two weeks before Diana’s death in August 1997. At times the Prince’s relationship with Charles has appeared strained.  But Harry has revealed to the BBC: ‘One of the hardest things for a parent to have to do is to tell your children that the other parent has died. But he was there for us and he tried to do his best and to make sure we were protected and looked after’

‘She had such warmth, she wanted to make people feel special,’ says William. ‘She realised she was in a unique position and could make people smile and feel better about themselves.

‘If I can be even a fraction of what she was, I will be proud and hopefully make her proud. Something so traumatic as the death of your mother when you are 15, it will either make or break you. And I wouldn’t let it break me. I wanted it to make me.’

But as Harry admits on the same programme: ‘When you are that young and something like that happens to you it is lodged in your heart and your head and stays there for a very long time.’

The best lesson the Princess taught her sons was, adds Harry, ‘be yourself in everything you do and give as much as you can’. Just as she did for them.

Here, to celebrate the way she lit up her boys’ lives – and they lit up hers – we present the best pictures of their too-short time together, with words taken from the Princes’ tribute interviews.

The cuddles she gave them, the laughter they shared and the aching loss that they felt when she was taken from them so suddenly – all are laid bare in powerful reflections on the role Diana loved best of all: being mother to her two adored little Princes.

Diana hugs a child with cancer in Lahore in 1996, a scene mirrored by Harry’s embrace with an orphan in South Africa in 2014 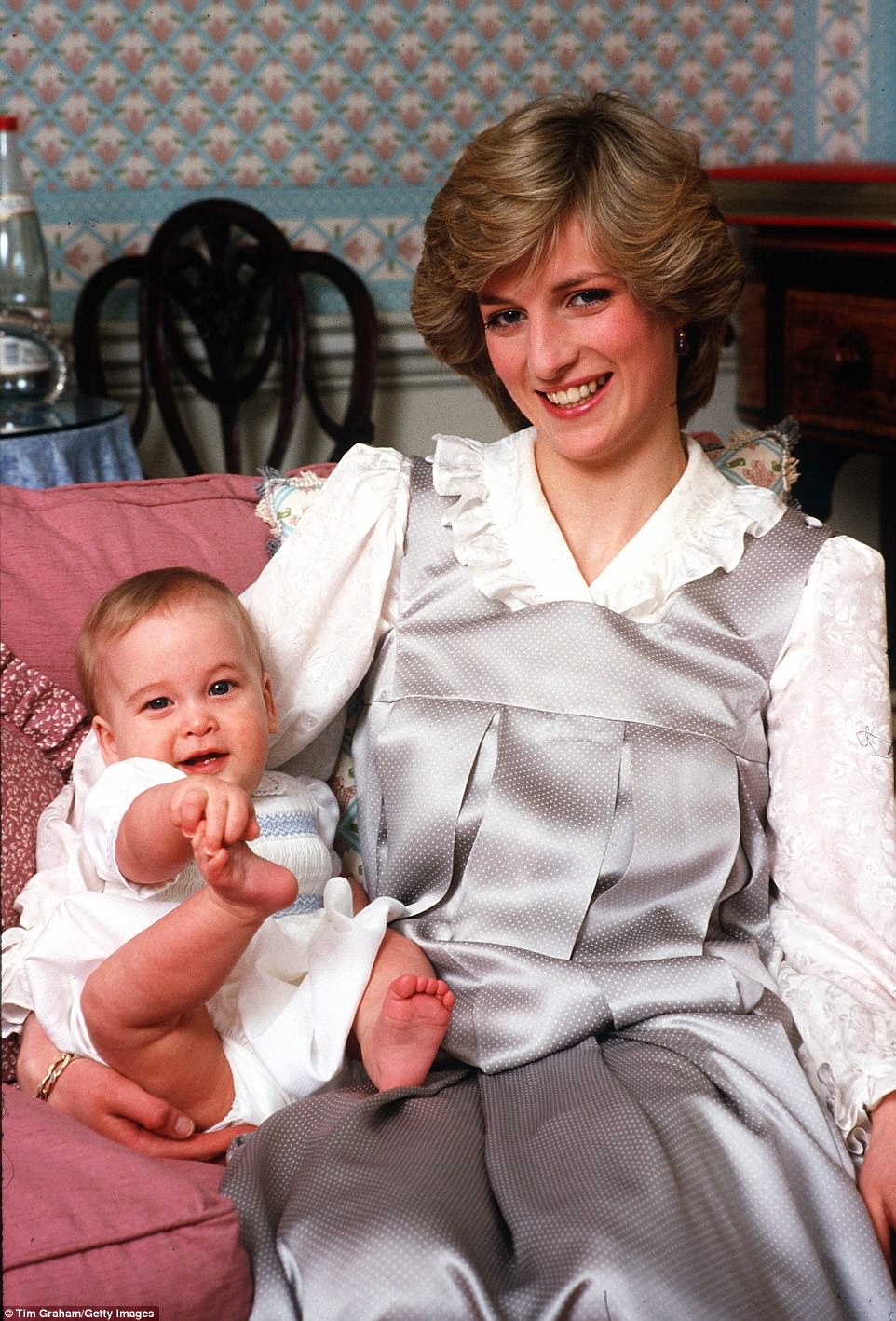 Diana with Prince William in Kensington Palace in 1983, doted on her babies 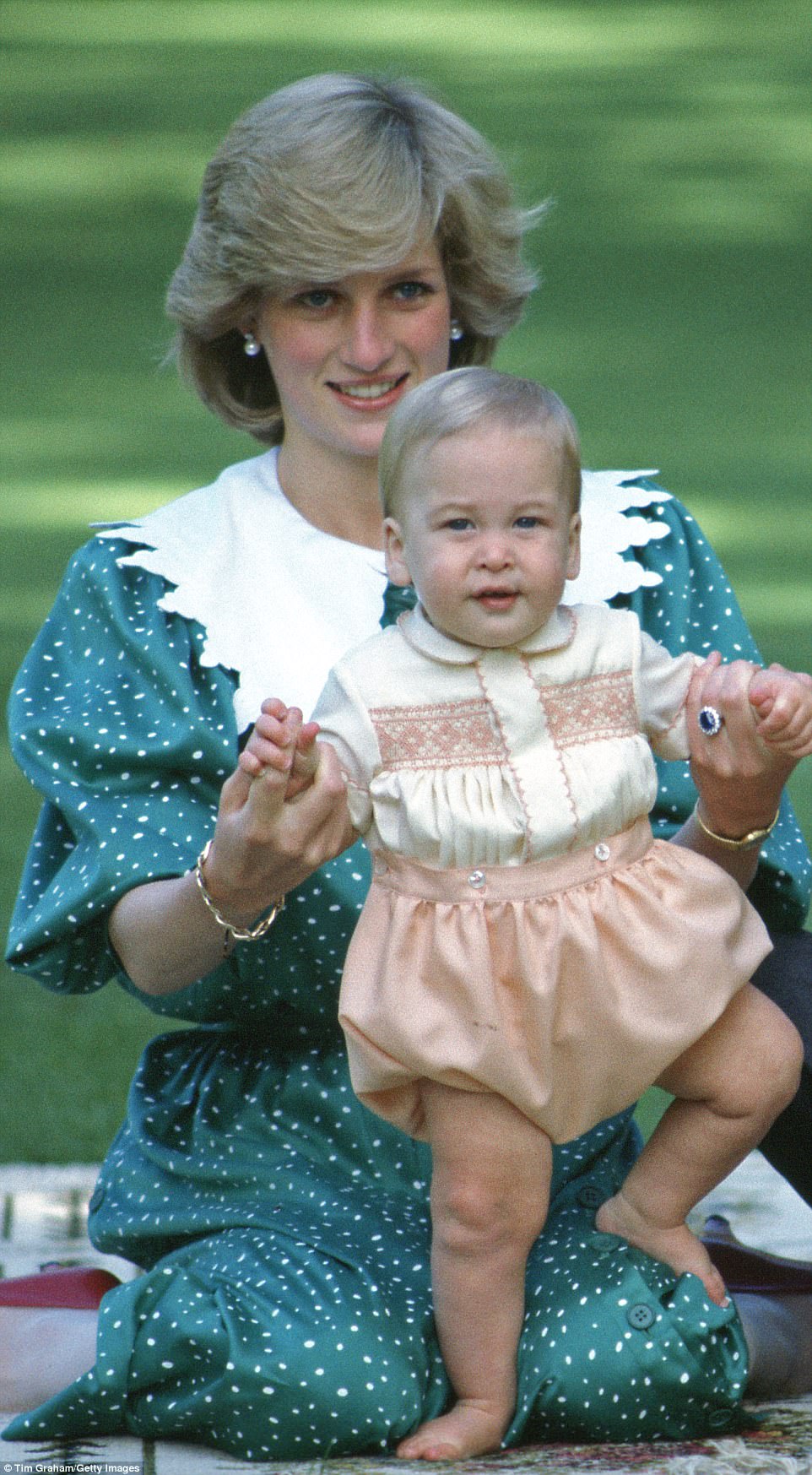 Princess Diana with Prince William in 1983. ‘She’d be a brilliant granny, she’d love the children to bits but she’d  be an absolute nightmare. She’d come in probably at bath time, cause an amazing scene, bubbles everywhere- and then leave’, said Prince William 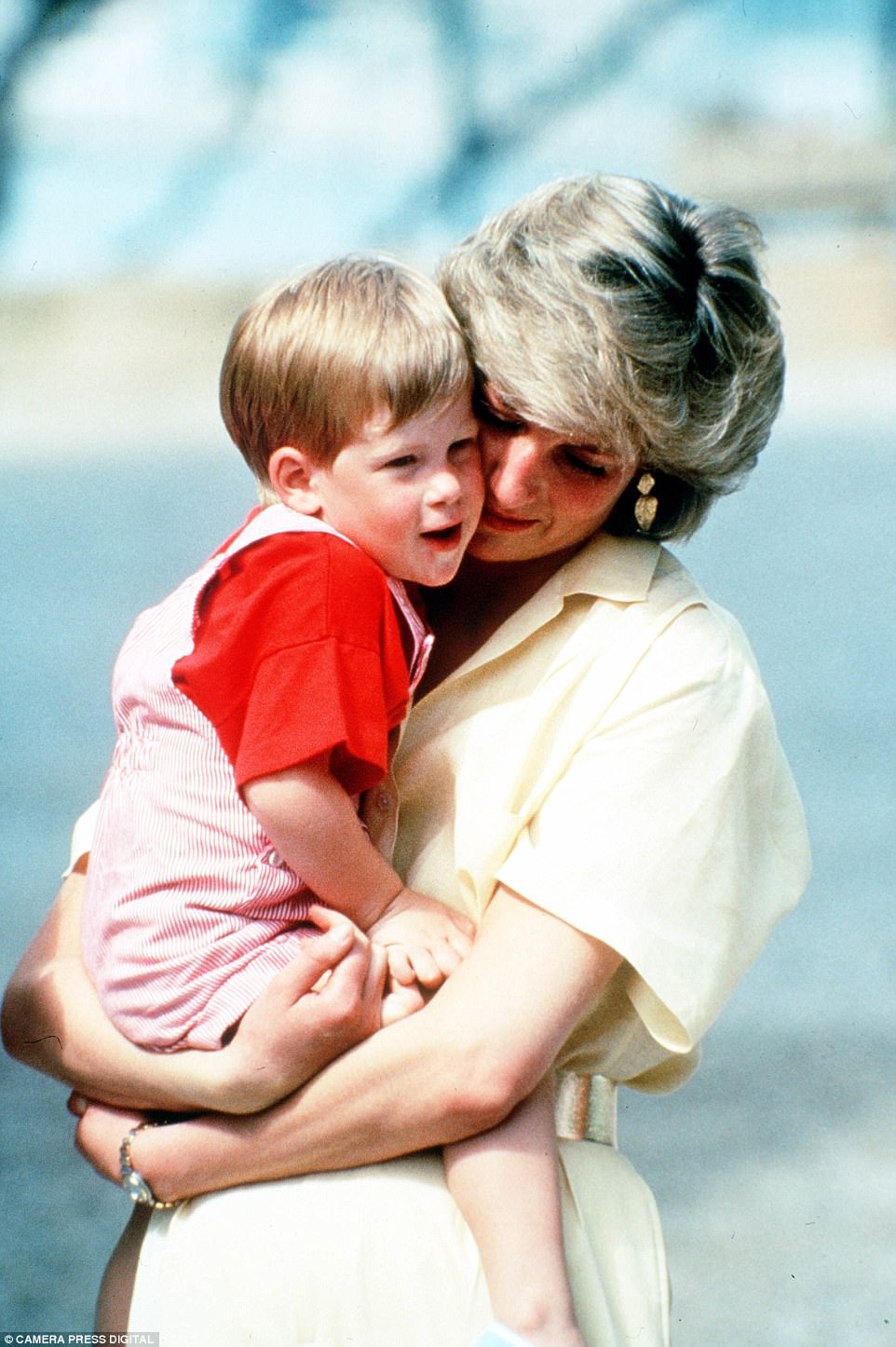 The Princess enjoys a cuddle with two-year-old Harry during a holiday to Majorca in 1987.

The Longest Walk: ‘It was one of the hardest things I’ve ever done, that walk. It felt like she was almost walking besides us to get us through it’

The Princes’ walk behind the gun carriage bearing their mother’s body to her funeral became an iconic image of national grief. As William tells the BBC tonight: ‘It was that balance between duty and family and that was what we had to do. It was a very long, lonely walk. I kept my head down a lot. I just hid behind my fringe. It was just like a tiny bit of a safety blanket.

‘I felt if I looked at the floor with my hair over my face no one could see me. It sounds ridiculous now but at the time it was important to me to get through the day.’

Harry has been more outspoken. In the magazine Newsweek, he said: ‘My mother had just died and I had to walk a long way behind her coffin surrounded by thousands of people watching me while millions more did on television. I don’t think any child should be asked to do that under any circumstances. I don’t think it would happen today.’ 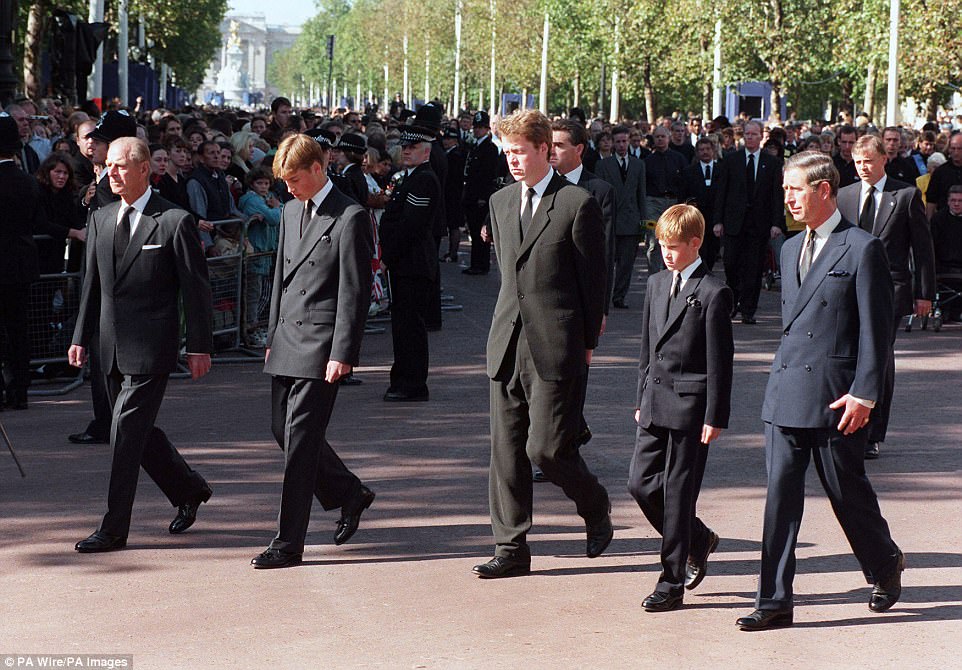 Prince William said: ‘It was one of the hardest things I’ve ever done, that walk. It felt like she was almost walking besides us to get us through it’

Talking to the BBC he is more conciliatory, saying: ‘Before I knew it, I found myself in a situation with a suit on and a black tie, a white shirt, I think, and I was part of it. Looking back on it now, I am very glad I was part of it.’ He adds: ‘To this day I can’t remember what I was thinking. I was so focused on getting it done and doing everything that was asked of me there and then, and making sure I did my mother proud.’ 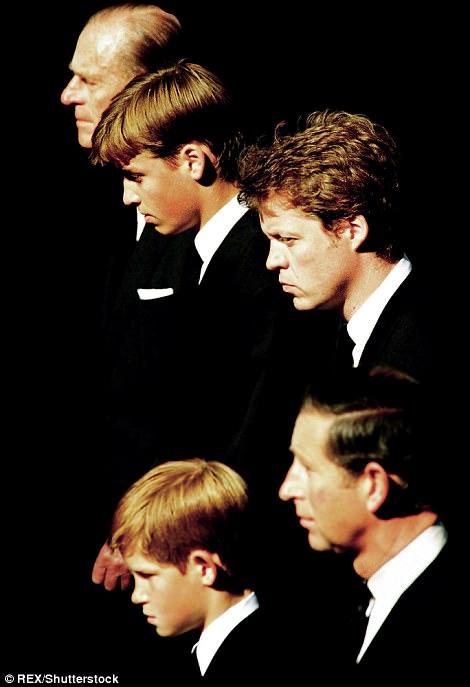 The Royal’s watched her coffin depart for burial at ancestral home, Althorp in Northamptonshire

In the same programme he pays tribute to his father’s bravery in breaking the news of Diana’s death, acknowledging that: ‘He was going through the same grieving process as well.’ William also praises the Queen, who had faced a national backlash for cloistering her family in Balmoral in the aftermath of the tragedy. He tells the BBC: ‘At the time my grandmother wanted to protect her two grandsons, and my father as well. She felt very torn between being a grandmother and her Queen role.’

The Queen’s reticence proved wise. Harry recalls his first appearance in public, travelling home from church four days after Diana’s death and stopping to see the hundreds of floral tributes at Balmoral: ‘I remember coming back in the car and getting out at the front gates. Looking back, the last thing I wanted to do was read what other people were saying about our mother.’

Back in London, the public reaction to the bereaved Princes was even more overwhelming. On the BBC Harry recalls: ‘People were grabbing us and pulling us into their arms. I don’t blame anyone for that, of course I don’t. But it was quite shocking. People were screaming, people were crying, people’s hands were wet because of the tears they had wiped away from their faces before shaking my hand.’

In the same programme, William concurs: ‘Everyone was crying and wailing and wanting to touch us. I was 15 and Harry was 12, nothing can really describe it. People wanted to grab us, to touch us. They were shouting, wailing, literally wailing at us, throwing flowers and yelling and sobbing and breaking down. They were fainting and collapsing.

‘I couldn’t understand why everyone wanted to cry as loud as they did and show such emotion when they didn’t really know our mother. I did feel a bit protective about that at times.

‘Looking back, I have learnt to understand what it was she gave the world and what she gave a lot of people.’ 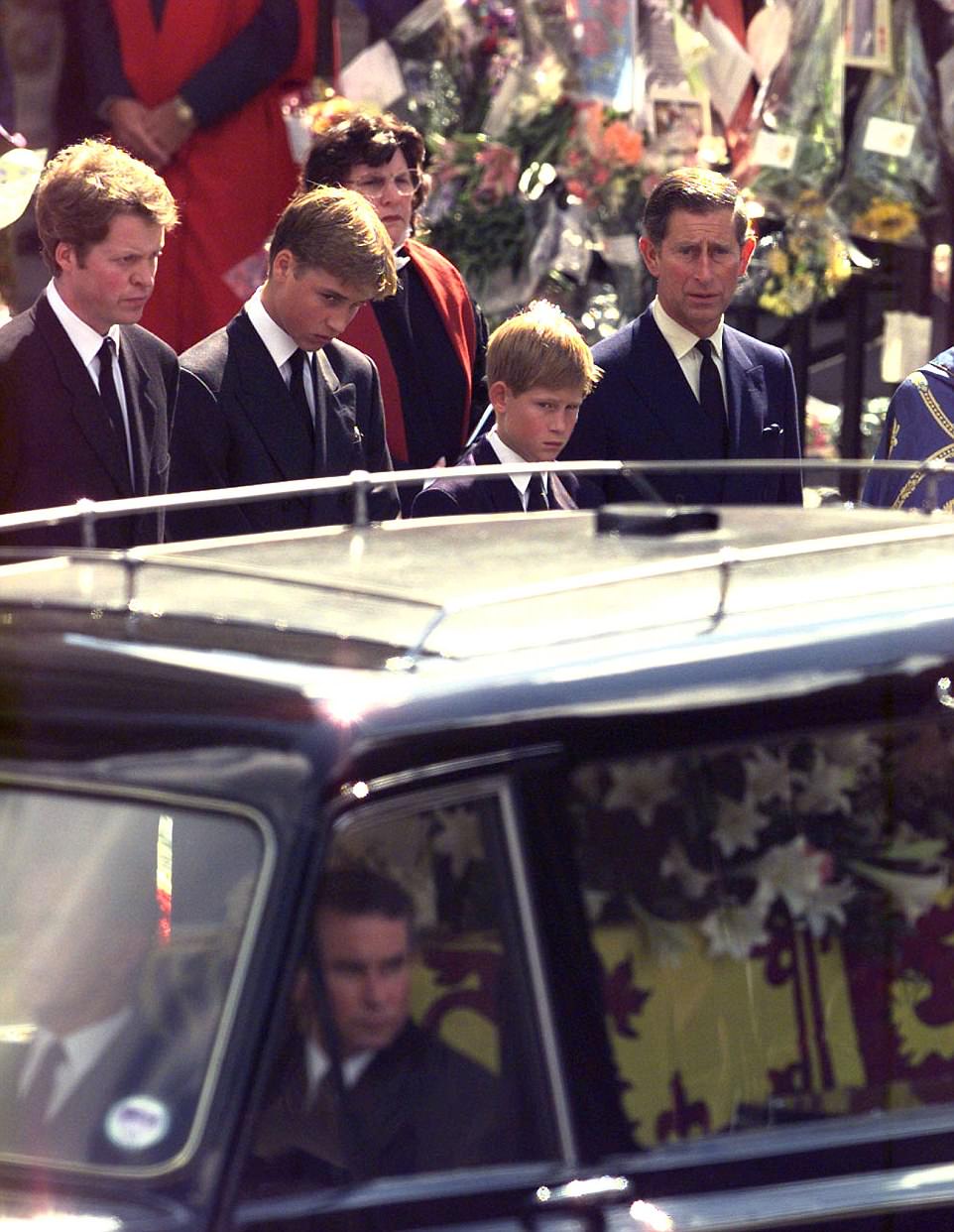 The young Princes, along with the Duke of Edinburgh, Prince Charles and Diana’s brother Earl Spencer, walk behind her coffin on the day of the funeral