A Victoria gold-hunter has found a 4.6 billion-year-old meteorite just outside Maryborough

Gold hunter finds a mysterious reddish rock buried near his home – only to discover it’s a 4.6billion-year-old meteorite

A gold hunter who spent three years trying to crack a mysterious reddish rock he found buried near his house got the surprise of his life when geologists told him it was a 4.6billion-year-old meteorite.

Victorian man David Hole used a drill, a rock saw and even sledgehammer as he attempted to break the object, thinking there must be a gold nugget inside.

But when he couldn’t crack it, Hole took the mysterious rock to scientists at Melbourne Museum who told him the rock was much rarer than any precious metal.

Mr Hole stumbled upon the 4.6 billion-year-old meteorite just outside Maryborough, 160km north-west of Melbourne, in 2015.

Victoria resident Dave Hole had stumbled upon a 4.6 billion-year-old meteorite (pictured) just outside Maryborough in 2015.

Scientists used a diamond saw to slice the edge off the rock.

Geologist Bill Birch said the rock is a ‘H5 ordinary chondrite meteorite’, which means it contains tiny crystallised droplets (chondrules) formed by flash heating of the dust clouds of the early solar system.

‘It appears the rock was formed around the same time the Earth was formed, but its mineral components are different from now Earth,’ Dr Birch told Daily Mail Australia.

‘It is important discovery in a sense that it provides evidence about when and how the solar system was formed and also helps in determining the age of the Earth.’

The meteorite, which is filled with very dense forms of iron and nickel unlike Earth rocks, is believed to have been formed in the asteroid belt between Mars and Jupiter.

Dr Birch believes the 17kg Maryborough meteorite fell to Earth within the last 200 years ‘because it’s not heavily weathered’.

There have been news reports of meteor sightings in the Maryborough district between 1889 and 1951. 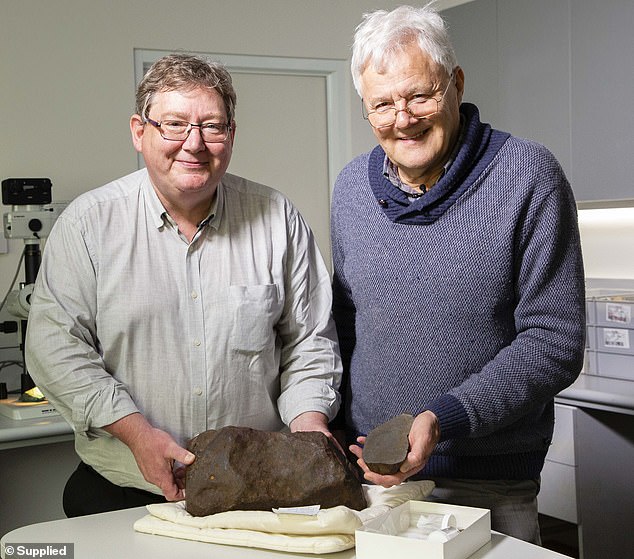 ‘Some provide a glimpse at the deep interior of our planet,’ he said.

‘In some meteorites, there is stardust even older than our solar system, which shows us how stars form and evolve to create elements of the periodic table.

‘Other rare meteorites contain organic molecules such as amino acids, the building blocks of life.’

The last meteorite found in Victoria was discovered at Willow Grove, Gippsland, in 1995.

It is believed Mr Hole has been paid well for his discovery.

The largest Australian meteorites are