A volcanic eruption and a poem brought Christianity to Iceland

A huge volcanic eruption helped convert Iceland’s Vikings to Christianity more than a thousand years ago, according to new research.

The eruption produced the country’s largest ever lava flood and was recorded in a medieval poem used to drive the island’s conversion to Christianity, the study claims.

Scientists used information contained within ice cores and tree rings to date the massive Eldgjá eruption, which took place soon after the island was first settled.

Having dated the eruption, the researchers found that Iceland’s most celebrated medieval poem, the Voluspá, contained a description of the event.

The poem also describes the end of the pagan gods and the coming of a new, singular god, and was a key text in the Christianisation of Iceland.

Until now, the date of the eruption had been uncertain, hindering investigation of its likely impacts, but scientists now believe it helped to push the country away from the Nordic gods of old.

A huge lava flood was recorded in a medieval poem (pictured), the famed piece of literature was used to turn people against the old Gods and towards Christianity. New research suggests the event described in the poem was the the 10th Century eruption of Icelandic volcano Eldgjá

The 10th Century eruption of volcano Eldgjá left the island covered in huge swathes of lava as it belched huge amounts of sulphurous gas and ash.

It was a colossal event with around five cubic miles (20 cubic kilometres) of lava erupted – enough to cover all of England up to ankle-height.

The Eldgjá lava flood affected southern Iceland within a century of the island’s settlement by Vikings and Celts around 874AD.

A team of scientists and historians, led by Cambridge University scholars, used information contained within ice cores and tree rings to accurately date the eruption.

They found the event began around the spring of 939AD and continued at least through the autumn of 940AD.

Co-author Prof Andy Orchard, of Oxford University’s Faculty of English, said: ‘The effects of the Eldgjá eruption must have been devastating for the young colony on Iceland – very likely, land was abandoned and famine severe.

‘However, there are no surviving texts from Iceland itself during this time that provide us with direct accounts of the eruption.’

But Iceland’s most celebrated medieval poem, Voluspá, could paint a dramatic picture of the event, according to a team of researchers.

Heralded as ‘The prophecy of the seeress’ it has been dated as far back as 961AD. 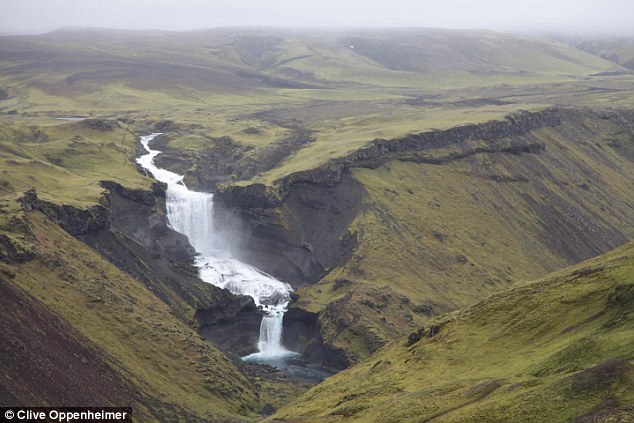 The Eldgjá fissure in southern Iceland (pictured) looks idyllic but the vast magma chambers below the crust of the nation can produce powerful eruptions. A volcanic eruption and a medieval poem combined to end of the old Norse Gods and  bring the dawn of Christianity

WHAT IS THE VOLUSPA AND WHAT IS IT ABOUT?

The Völuspá is an ancient poem which dates back to the 10th Century.

It is part of the Poetic Edda, which is the modern name for an unnamed collection of Old Norse anonymous poems.

No texts exist from when it was first published in 961AD, the oldest surviving copies date back to the 1200s.

The poem is made of around 60 stanzas, which varies depending on the version of the poem, and refers to the creation of the world and its imminent destruction.

The order and wording of the poem varies according to different versions but the text has become a central part of medieval Viking history.

As well as talking about the end of the Norse Gods reign, it mentions a single God becoming all-powerful.

This is believed to be one of the major turning points in the religious history of the Nordic nations and has been attributed to the widespread adoption of Christianity by Vikings in Iceland.

The first publications of the poem tie-in with the time when paganism was dying out. 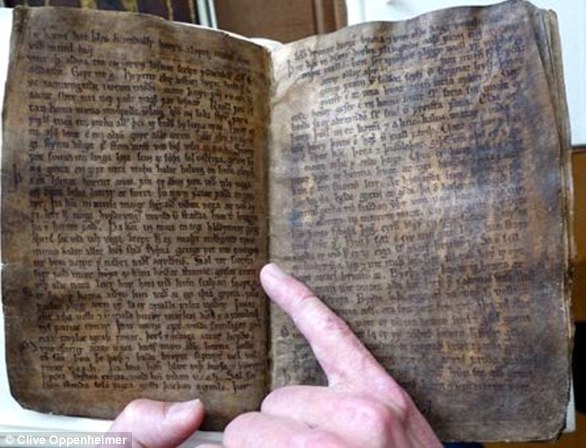 No texts exist from when it was first published in 961AD. The oldest surviving copies date back to the 1200s

It tells of Odin, chief of the Gods, consulting a Volva (a wise-woman) who regales him with stories.

As well as many different stories, the seer also tells of a prophecy regarding the destruction of the Gods.

A final battle, in which fire and flood overwhelm heaven and earth as the gods fight with their enemies, called ragna rök (the fate of the gods).

The wise-woman talks of a battle between evil Loki and Odin at ragna rök where the Valkyries raise dead warriors to fight for Odin.

Despite the fight, Odin is slain and the Gods fall.

This central piece of Nordic literature also tells of dwarves and names them.

Some of these, Fili and Kili for example, were adopted by J. R. R. Tolkien as names for his dwarves in his Lord of the Rings series of books.

It reads: ‘The sun starts to turn black, land sinks into sea; the bright stars scatter from the sky. Steam spurts up with what nourishes life, flame flies high against heaven itself’.

The poem also depicts cold summers that would be expected after a massive eruption, and the researchers link these descriptions to the spectacle and impacts of the Eldgjá eruption, the largest in Iceland since its settlement.

The poem’s apocalyptic imagery marks the fiery end to the world of the old gods and the coming of a new, singular god.

This move towards a single deity spells out the conversion of the Vikings to Christianity, which was formalised as Iceland’s principle religion around the turn of the 11th Century.

The researchers suggest Voluspá may have been intended to rekindle harrowing memories of the Eldgjá eruption to stimulate the massive religious and cultural shift taking place in Iceland at the time. 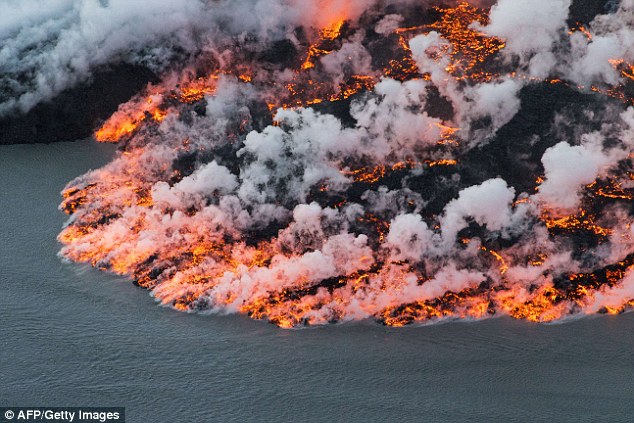 The eruption of volcano Eldgjá in 939AD left the island covered in huge swathes of lava. Iceland specialises in this type of eruption – the last example occurred in 2015 (pictured), and it affected air quality 1,400 (900 miles) kilometres away in Ireland 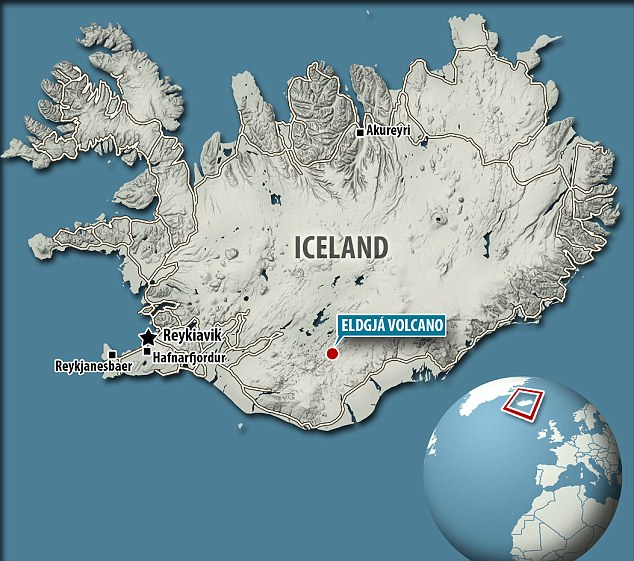 The Eldgjá eruption in the tenth century caused devastation across several countries in the northern hemisphere. It resulted in the coolest summer for 1,500 years, researchers found

‘This places the eruption squarely within the experience of the first two or three generations of Iceland’s settlers,’ said lead author Dr Clive Oppenheimer of Cambridge’s Department of Geography.

‘Some of the first wave of migrants to Iceland, brought over as children, may well have witnessed the eruption.’

Once they had a date for the Eldgjá eruption, the team then investigated its consequences.

The volcanologists found that first, a haze of sulphurous dust spread across Europe.

In Irish, German and Italian chronicles from the same period, there were several reports of an exceptionally blood-red and weakened sun.

The huge ash cloud produced in Iceland reduced the sunlight in around much of the northern hemisphere.

Dr Oppenheimer added: ‘With a firm date for the eruption, many entries in medieval chronicles snap into place as likely consequences – sightings in Europe of an extraordinary atmospheric haze; severe winters; and cold summers, poor harvests; and food shortages.

‘But most striking is the almost eyewitness style in which the eruption is depicted in Voluspá. 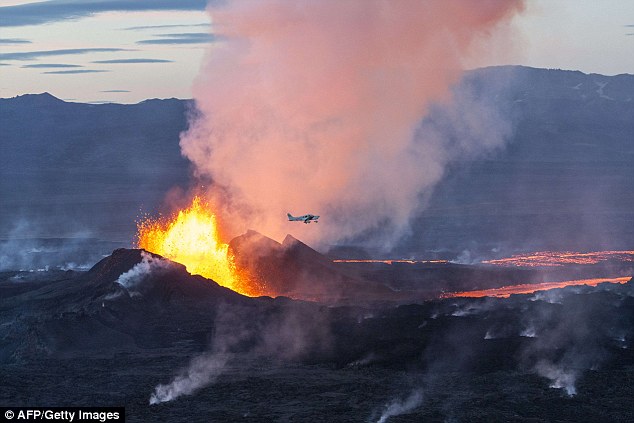 ‘The poem’s interpretation as a prophecy of the end of the pagan gods and their replacement by the one, singular god, suggests that memories of this terrible volcanic eruption were purposefully provoked to stimulate the Christianisation of Iceland.’

Analysis of tree rings showed that the volcanic eruption caused one of the coolest summers of the last 1,500 years.

The impact this had on people around the world was widespread and devastating.

HOW CAN RESEARCHERS PREDICT VOLCANOES?

According to Eric Dunham, an associate professor of Stanford University’s School of Earth, energy and Environmental Sciences, ‘Volcanoes are complicated and there is currently no universally applicable means of predicting eruption. In all likelihood, there never will be.’

However, there are indicators of increased volcanic activity, which researchers can use to help predict volcanic eruptions.

Researchers can track indicators such as:

Effects of the eruption were felt as far afield as Iraq, Canada and China as hoards of locusts swept in at the same time that famine killed droves of people in the Northern hemisphere.

Iceland specialises in this type of eruption – the last example occurred in 2015, affecting air quality 900 miles (1,400 kilometres) away in Ireland.

Study co-author Dr Tim Newfield, of Georgetown University in the US, said: ‘It was a massive eruption, but we were still amazed just how abundant the historical evidence is for the eruption’s consequence.

‘Locust infestations and livestock mortalities occurred. Famine did not set in everywhere, but in the early 940s we read of starvation and vast mortality in parts of Germany, Iraq and China.’