The Duchess of Sussex has called on her star-studded network of actors, activists, fashion designers, musicians  and world leaders to back her 40×40 project, which was launched yesterday to coincide with her 40th birthday.

Close friends including actress Priyanka Chopra, fashion designer Misha Nonoo and makeup artist Daniel Martin joined Hillary Clinton and Facebook COO Sheryl Sandberg in announcing their support for the initiative which encourages people to commit to giving 40 minutes of their time to support women going back to work.

Nobel Peace Prize nominee Amanda Nguyễn revealed Meghan sent branded 40×40 t-shirts to participants, along with a note announcing her goals. The pink t-shirt is emblazoned with the message: ‘For women who give everything. We give our time. Are you in?’ It arrived in tissue paper in a white box adorned with a black ribbon.

The Duchess of Sussex has called on her star-studded network of actors, activists, fashion designers, musicians and world leaders to back her 40×40 project, which was launched in a video yesterday (pictured) to coincide with her 40th birthday 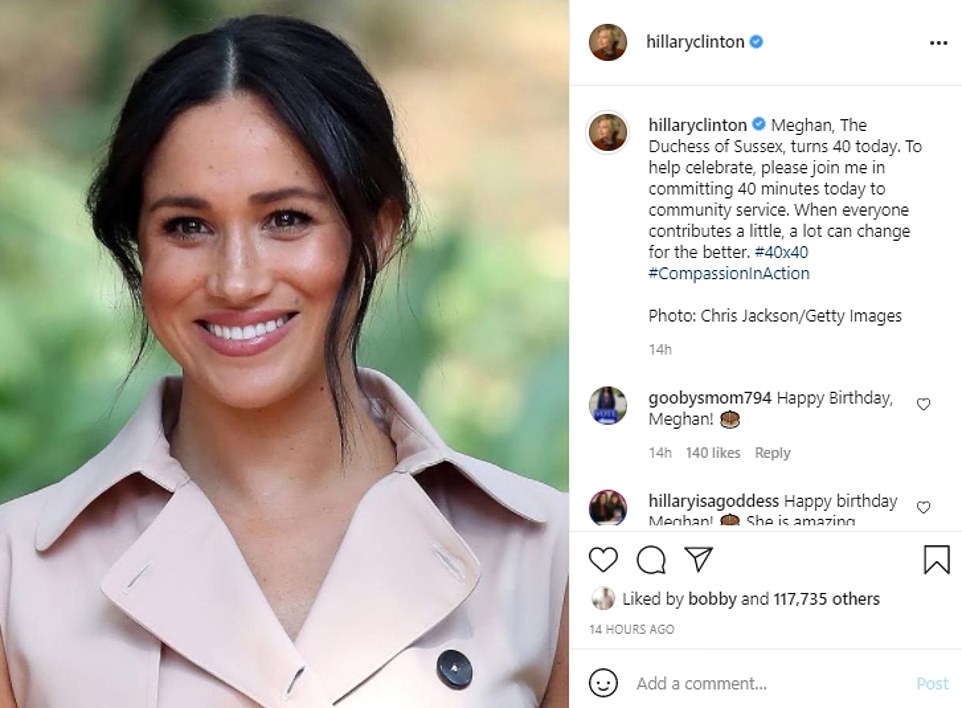 Public support: Hillary Clinton was among those who showed their support for 40×40 on social media

Revealed: 25 of Meghan’s 40×40 power players who have been revealed so far, including Hillary Clinton, Ciara and Princess Eugenie

Adele, 33, has not posted about 40×40 on her Instagram account but was among the participants listed in a statement from the Duchess of Sussex’s office. The British singing sensation reportedly befriended Harry and Meghan when they moved to California last year and even went so far as to recommend a nursery for Archie.

Nadine Burke Harris is a Canadian-American pediatrician who has been the Surgeon General of California, where Harry and Meghan live, since 2019.

She is an advisory council member for the Clinton Foundation’s ‘Too Small to Fail’ campaign, and the founder and former chief executive officer of the Center for Youth Wellness. Dr Burke Harris has pledged to volunteer at her children’s school for her commitment to the 40×40 initiative.

Deepak Chopra, 74, who contributed to the Duke and Duchess of Sussex’s first – and only – Spotify podcast episode, is a wellness guru with a star-studded following.

He is the author of bestselling book Perfect Health, which has been described as the ‘first practical guide to harnessing the healing power of the mind’. Chopra, who champions meditation and alternative medicine, describes stress as the ‘biggest pandemic of our time’.

Actress Priyanka Chopra, 39, has been friends with Meghan since before she met Prince Harry and was a guest at the Sussexes’ wedding in 2018.

Priyanka, who is married to musician Nick Jonas, made headlines last month when she appeared to ‘ignore’ Prince William and Kate Middleton’s arrival to the Royal Box at Wimbledon.

‘Meghan, you are incredible, I am so excited to support your campaign,’ popstar Ciara Wilson said as she announced her support for the Duchess of Sussex’s campaign. It is not known if Meghan and Ciara know each other but the singer is known for backing social causes that champion women.

Former US Democratic Presidential nominee Hillary Clinton continues her public support of the Duchess of Sussex after she praised the royal’s bombshell Oprah Winfrey interview.

Speaking at the time Mrs Clinton said she understood what it felt like to face the level of public scrutiny Meghan had experienced. 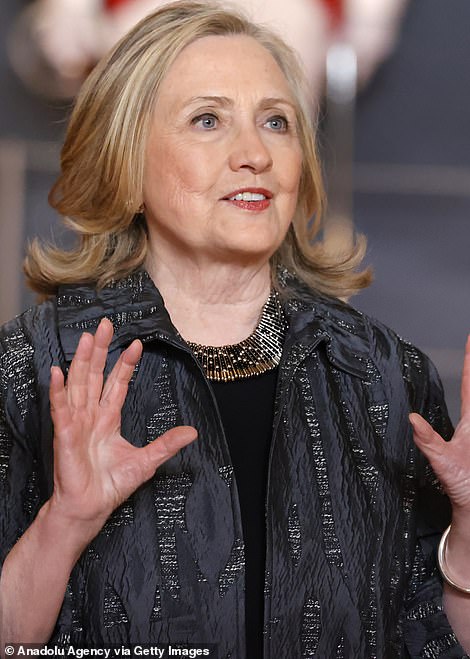 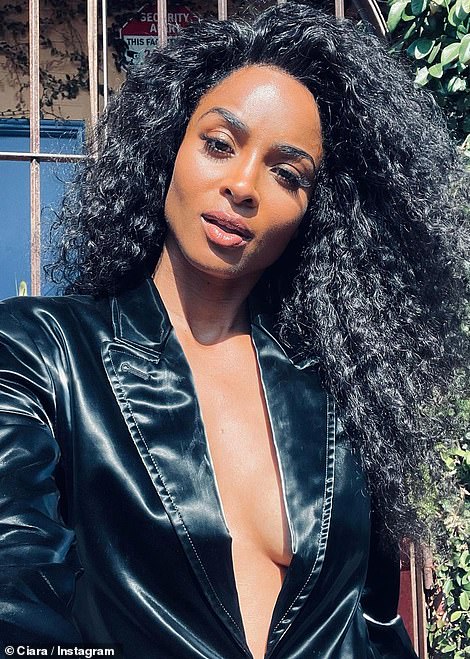 Speaking out: Hillary Clinton (left) and singer Ciara (right) both pledged their support to the Duchess of Sussex’s initiative

A-list fan: ‘Meghan, you are incredible, I am so excited to support your campaign,’ Ciara said on Instagram

US journalist and TV queen Katie Couric works with Prince Harry on the Aspen Institute’s Commission on Information Disorder. It was announced in March that Harry would join the six-month study as a commissioner, while Couric is co-chair.

She has also worked with Omid Scobie, the co-author of Finding Freedom and one of the Sussexes’ preferred journalists. Couric is the founder of the daily Wake Up Call newsletter.

Edward Enninful is the editor-and-chief of British Vogue and worked closely with the Duchess of Sussex on her 2019 September issue.

He describes the royal as a ‘friend’ and has described her as a ‘very brave woman’ in interviews. Enninful has posted behind-the-scenes photos with the duchess, showing them dressing up together.

Princess Eugenie showed just how close she is to her cousin’s wife yesterday when she shared a birthday Instagram message to ‘dear Meghan’. Eugenie and Meghan met through mutual friends – they are both close to Misha Nonoo – before the Duchess met Prince Harry.

Harry and Eugenie have long been close and have been described as ‘the best of friends’. Their relationship has only strengthened over the years. Harry and Meghan have allowed Eugenie and Jack Brooksbank to stay at Frogmore Cottage and spoke warmly of the couple to Oprah. 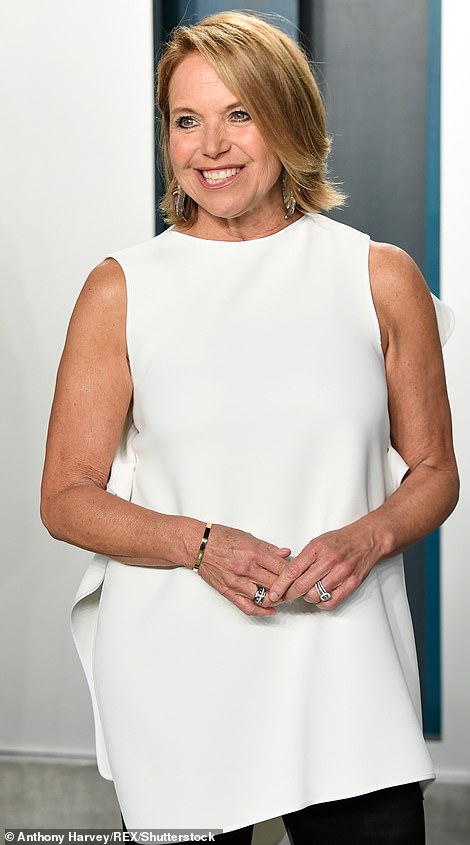 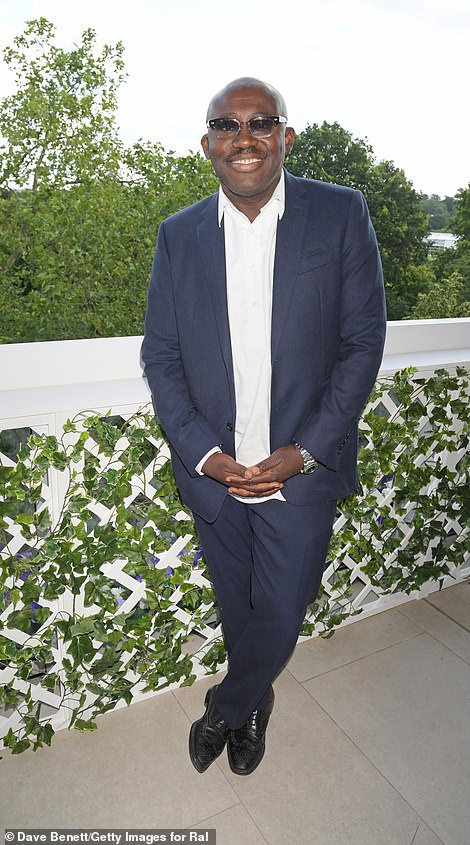 Media heavyweights: US journalist Katie Couric (left), who works with Prince Harry on the Aspen Institute’s Commission on Information Disorder and Edward Enninful, editor-in-chief of British Vogue and a friend of the Duchess of Sussex 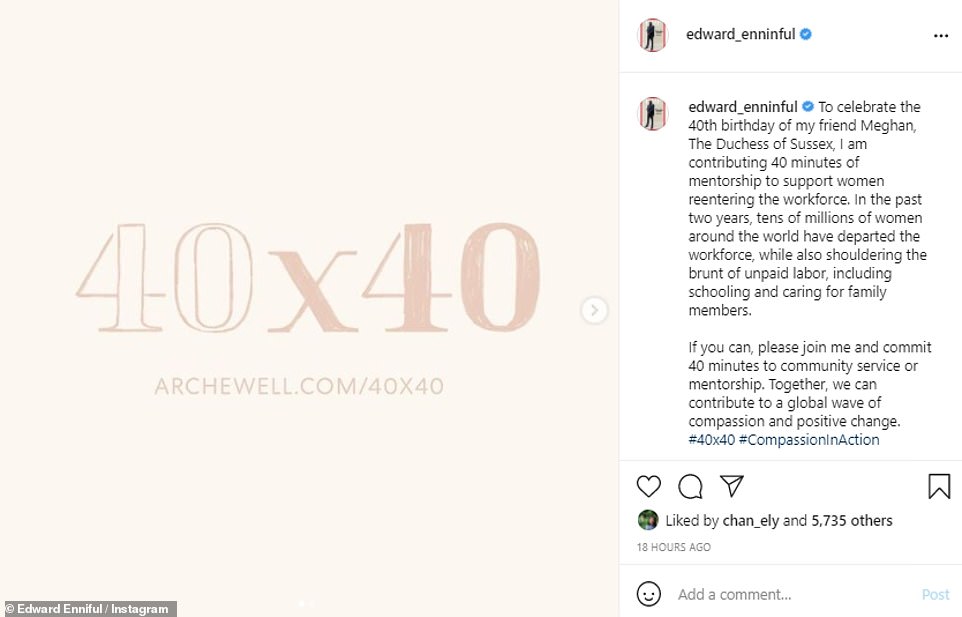 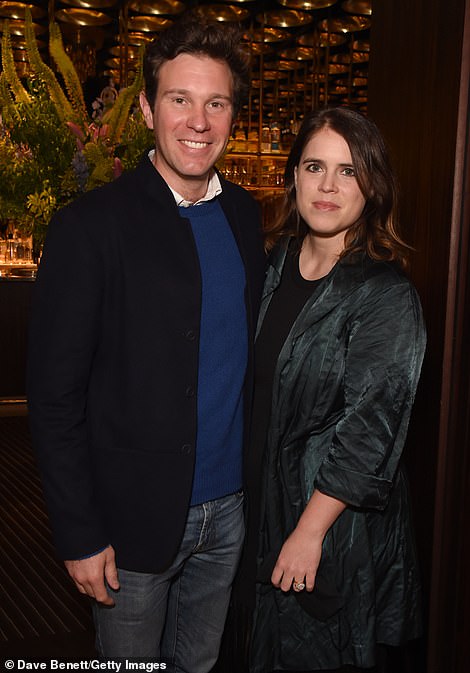 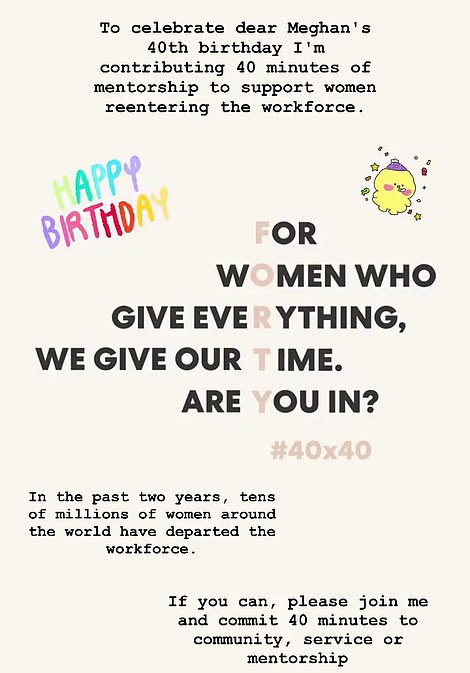 Poet Amanda Gorman burst onto the global stage after delivering her address at President Biden’s inauguration in January.

Social media star Amanda counts Oprah and the Obamas among her fans and describes Meghan as her ‘friend’. The talented 23-year-old is also a model and signed to international agency IMG.

Nobel Peace Prize nominee Amanda Nguyễn, founder of US civil rights nonprofit organisation Rise, was among those personally chosen by Meghan to participate in the project.

Nguyễn shared a video of her opening the t-shirt sent by the Duchess along with a short post praising her ‘compassion’ on her birthday.

Meghan Markle’s fashion designer BFF Misha Nonoo revealed in February she is pregnant with a baby girl – weeks after the Duchess announced she was expecting.

The pair also welcomed their sons within months of each other, and Misha has spoken of how motherhood has brought them even closer together.

Misha’s first husband Alexander Gilkes went to school with Prince William and Prince Harry. The Duke and Duchess of Sussex flew to Rome for her wedding to Mike Hess in 2019. 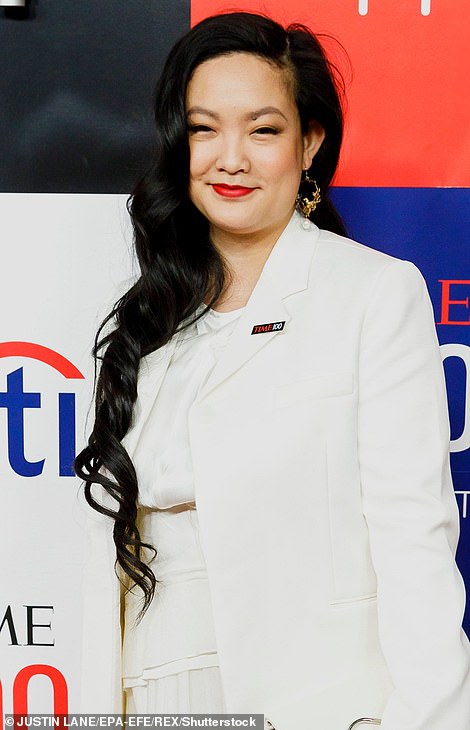 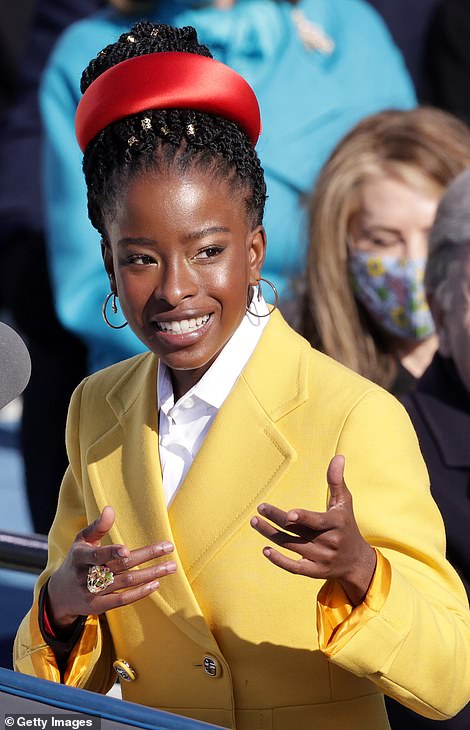 Makeup artist Daniel is believed to have known Meghan for over a decade, having met her while the former actress worked on Suits, and remained in contact with the Duchess throughout her life in the Royal Family.

He did her makeup on her wedding day and attended her baby shower in New York. Daniel was one of the first to visit the Duke and Duchess of Sussex when they moved into Frogmore Cottage shortly before Archie’s birth.

To launch 40×40, Meghan roped in actress and producer Melissa McCarthy. Emmy and Golden Globe-winner McCarthy, best known for Bridesmaids, Spy and The Heat, has not spoken of her friendship with the royals before but the pair seemed to get on well and joked about matching tattoos, suggesting a close bond.

Melissa, who is starring in the upcoming film Thor: Love and Thunder, lives with husband Ben Falcone in California. 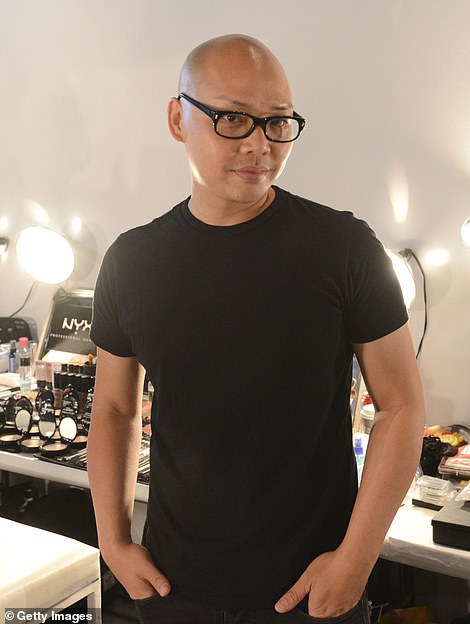 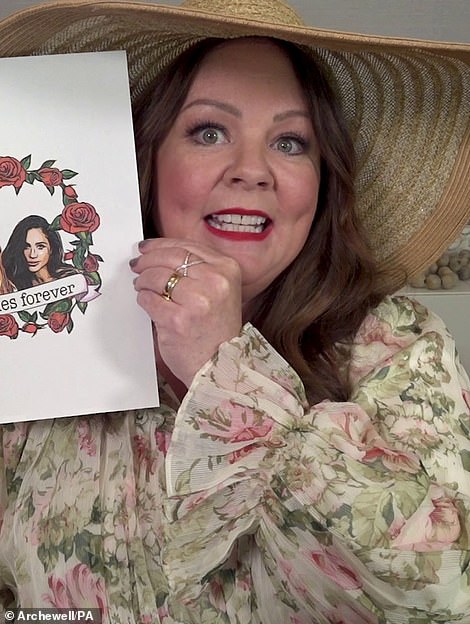 Makeup artist Daniel Martin (left) is believed to have known Meghan for over a decade, having met her while the former actress worked on Suits, and remained in contact with the Duchess throughout her life in the Royal Family. Right, Hollywood actress Melissa McCarthy is also involved after helping Meghan announce the project in a video yesterday (pictured)

British fashion designer Stella McCartney designed the Duchess of Sussex’s stunning bridal gown for the evening reception of her 2018 wedding. Speaking at the time, Stella, 49, said she felt ‘very proud’. The designer, daughter of the Beatles’ Paul McCartney is known for her eco-friendly take on fashion.

Emmy Award-winning actress Sarah Paulson is best known for her roles in Ratched, American Horror Story and American Crime Story: The People v.s. OJ Simpson. The 46-year-old star described herself as the Duchess’s ‘friend’ in a post announcing her commitment to 40×40.

Facebook COO Sheryl Sandberg was an inspiration for Meghan long before she became the Duchess of Sussex, thanks to her bestselling book Lean In.

Meghan read the book while working on US legal drama Suits and credited it for helping to inform her character’s behaviour in the workplace. Now Meghan and Sheryl are more likely to cross paths at global events. Both women spoke at the Girl Up Leadership Summit in August last year. 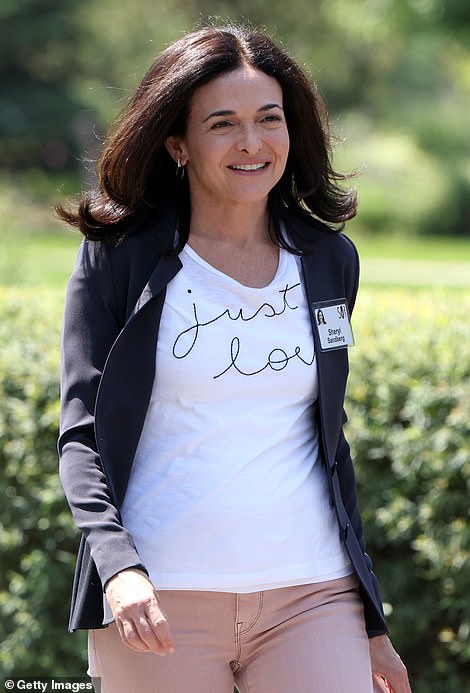 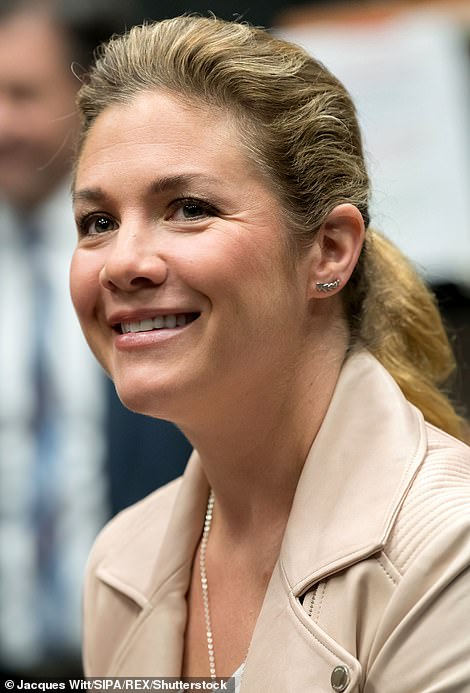 Friends in high places: Facebook COO Sheryl Sandberg (left). Right, Sophie Trudeau, the wife of Canadian Prime Minister Justin Trudeau, who first met Meghan when she was working as an actress in Toronto 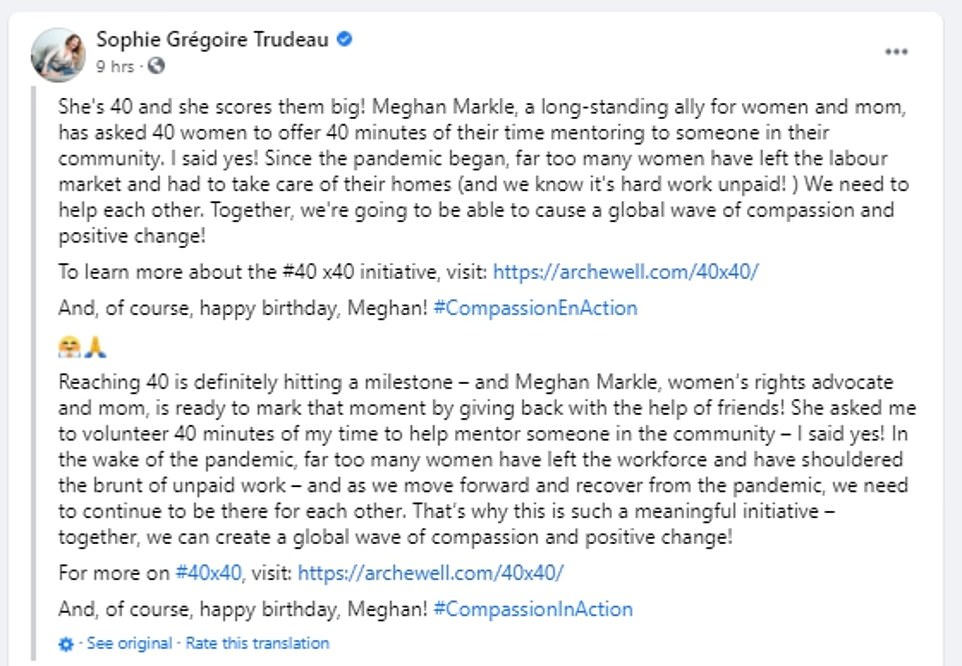 Sophie, who was personally asked to be involved in the initiative, shared a message calling the Duchess a ‘long-standing ally of women and moms’

Meghan Markle may be one of the most well known faces in the world, but that didn’t stop her from coming over all star struck when she sat down with activist Gloria Steinem for a conversation about women’s rights, representation, and the importance of voting last year.

The Duchess appeared overwhelmed with excitement at points during her ‘backyard chat’ with Gloria, which was filmed in July 2020 for Makers Women, a women’s empowerment platform.

Steinem was one of the most prominent figures of the Women Liberation’s movement of the 1960s and 1970s.

Sophie Trudeau, the wife of Canadian Prime Minister Justin Trudeau, first met Meghan when she was working as an actress in Toronto.

The pair used to attend parties along with their mutual friend Jessica Mulroney, the stylist daughter-in-law of former Canadian PM Brian Mulroney.

Sophie, who was personally asked to be involved in the initiative, shared a message calling the Duchess a ‘long-standing ally of women and moms’. Social media photos show the pair pulling faces as they pose for snaps in a photo booth.

Actress and TV star Gabrielle Union was asked by the Duchess to take part in the initiative – and proudly showed off her branded ‘FORTY’ t-shirt on social media, alongside a message announcing her involvement.

Gabrielle, who called out the toxic culture on America’s Got Talent, has her own black haircare line and co-founded organic snack food company Bitsy’s. She is also a social media powerhouse with 18.5million Instagram followers. Her posts often feature her NBA legend husband Dwayne Wade and their family. 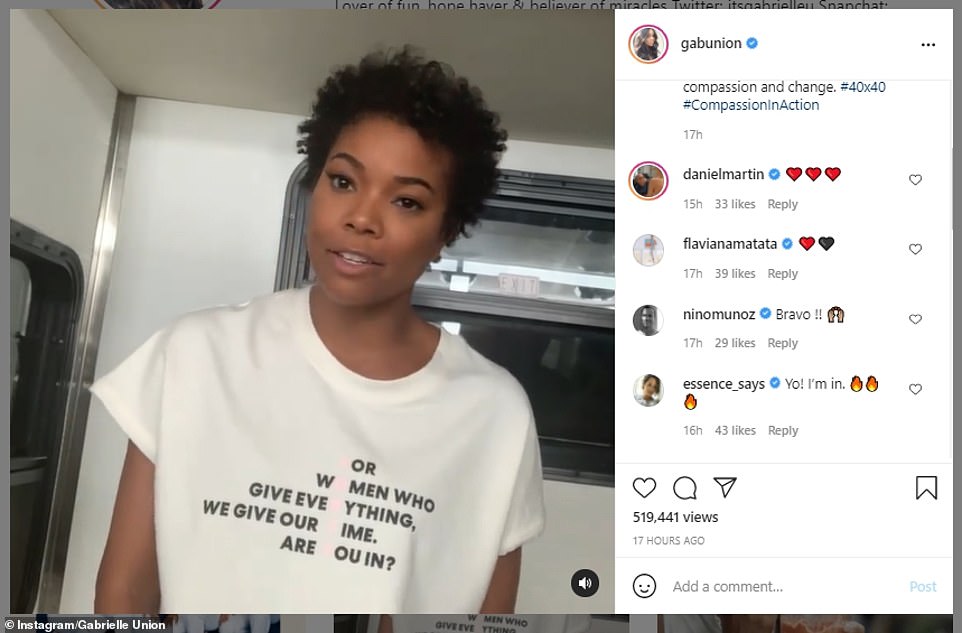 Actress and TV star Gabrielle Union was asked by the Duchess to take part in the initiative – and proudly showed off her branded ‘FORTY’ t-shirt on social media, alongside a message announcing her involvement