A mum has told how she spends Christmas Day with her fiancé and his ex – and the two women have even bonded by talking about their sex lives.

Kaylee Hamilton, 25, from Carmarthenshire, has been in a relationship with fiancé Javan Sebastian, 27, for almost three years, and they have two sons, Milan, one, and Marcellus who arrived last month.

Javan is also dad to five-year-old daughter, Nevaeh, five, from a three-year romance with his ex Emily Cann, 25.

It was when Kaylee fell pregnant with Marcellus that the women started to get close, and now Emily, a stay-at-home mum, is set to spend a cosy Christmas with Javan and his new family.

They wll also be joined by her current partner Euros Thomas, 26, and their two children Amara, three, and five-month-old Dottie.

Pictured clockwise from top left; Euros, Javan, Neveah, Kaylee, Amara and Emily. The family will all swap presents on Christmas Day, watch movies and eat a meal together 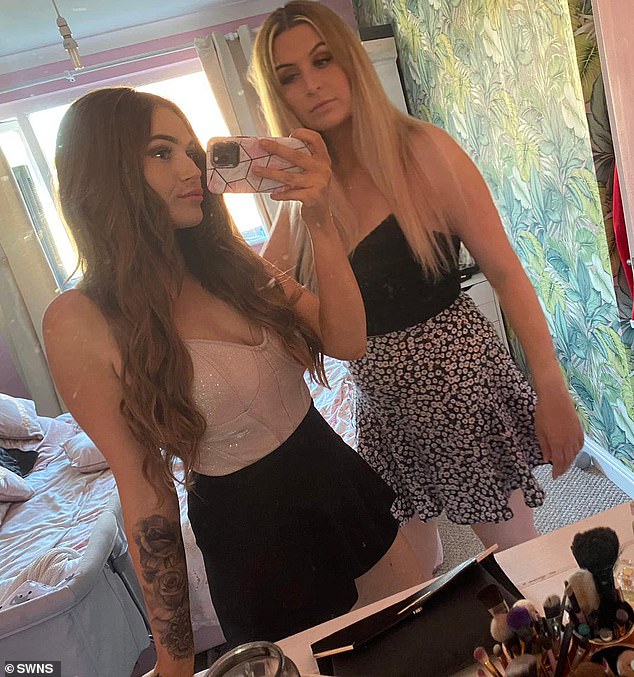 Kaylee, also a full-time mum who has a daughter Mazey, three, from a previous relationship, says: ‘Some might think it is a bit odd that Javan’s ex and her family will spend Christmas with me, Javan and the kids but for us, it will feel like any normal Christmas.

‘It solves the problem of who will have Nevaeh on Christmas Day which used to cause arguments and doing it this way means neither Javan or Emily misses out. We all get along really well – Emily is like a sister to me.’

‘We’ll swap gifts in the morning – we have a £40 budget for us adults and the same for each child – and the older kids will play together. Javan cooks dinner while me and Emily catch up.’

‘Then we’ll have some drinks, perhaps watch a Christmas film and they’ll all stay the night. We did it last year and can’t wait to do the same again.’ 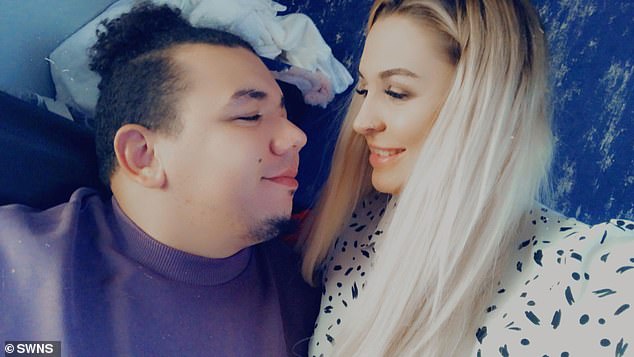 Kaylee, 25, has been in a relationship with fiancé Javan Sebastian, 27, for almost three years and now the couple share two children together

The pair haven’t always been the best of friends and when Kaylee first met Emily in May 2019, two months after Kaylee started dating Javan, she wasn’t as welcoming.

Kaylee says: ‘I was wary of Emily as anyone would be with an ex-partner. I didn’t know if she still had feelings for Javan. The first time we met was when Emily came to collect Nevaeh. We were amicable and said a quick hello but that’s as far as it went.’

‘If Emily and Javan fell out, I always sided with Javan. Looking back, I probably got involved more than I should’ve done.’

For Emily, the feeling was mutual. She says: ‘I didn’t like Kaylee at first. Me and Javan had been apart for a year when Javan met Kaylee and we still argued a lot. We disagreed on childcare when it came to Nevaeh and Kaylee would take his side.’

‘That made things difficult between us. We saw each other when we had to.’

It was only when Kaylee fell pregnant with Nevaeh’s half-brother, Milan, a couple of months later the girls became friendlier.

Kaylee says: ‘My feelings towards Emily changed towards the end of my pregnancy with Milan. Both of us would have a child with Javan which put us on a more even footing. With Javan being the dad of both children, we found a common ground.

‘She no longer felt like a threat to mine and Javan’s relationship.’ 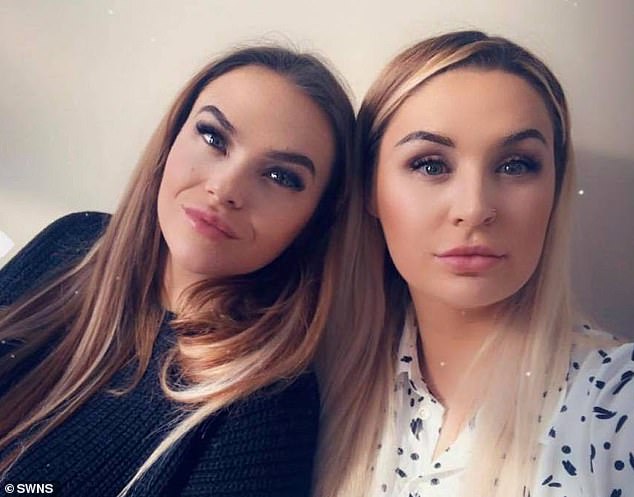 ‘My labour with Milan was induced and I was in hospital for a week. Javan couldn’t drive and because I didn’t have family close by Emily helped out. She dropped snacks at the hospital and anything else I needed.

‘It became impossible not to like her because she was being so kind, and it was during that time she started to feel like a friend and not just Javan’s ex.’

A few weeks after Milan was born, Kaylee invited Emily on a shopping trip as a thank you which she accepted.

Emily says: ‘I expected it to feel awkward with it being just the two of us because it isn’t every day you go out with your ex’s new partner, but I was surprised by our similarities. 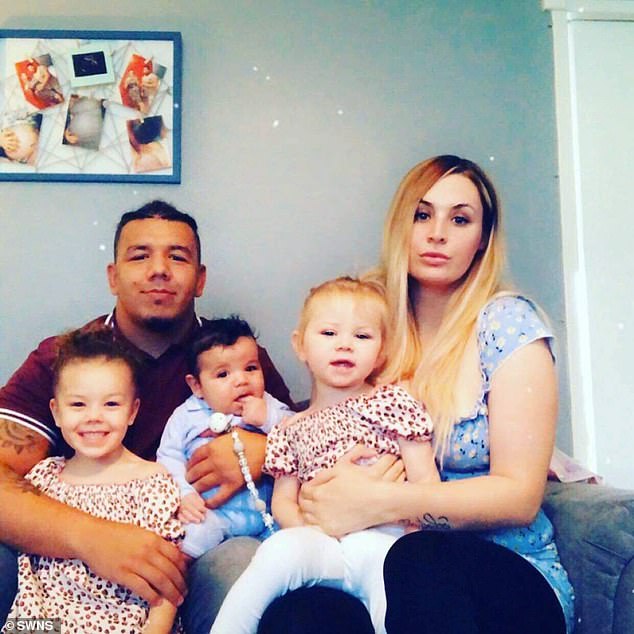 Previously, Emily and Javan had Nevaeh on alternate Christmases which had been awkward for the pair and led to arguments

‘We’re both fiery and loud and we found out we have the same style and tastes in clothes – and we both talk a lot.’

Kaylee says: ‘The more Emily talked to me about Javan and why their relationship didn’t work, the more I realised she didn’t have feelings for him. I felt comfortable and I started to open up about my relationship with Javan- just as you would with any girlfriend.

The women, who live half an hour apart then began arranging double dates with Javan and Emily’s carpenter partner Euros who she met four years ago. 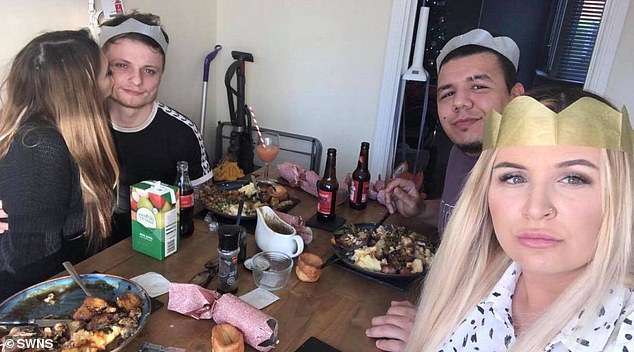 Emily says: ‘Euros was fine with my friendship with Kaylee and mixing with Javan because we have a daughter together. I reassured him I didn’t have any feelings for Javan romantically.’

‘He and Javan got on really well when we were all together.’

If Kaylee has a fall out with professional rugby player Javan, it’s Emily she turns to and in November, Emily was Kaylee’s birthing partner when she gave birth to Marcellus.

Kaylee says: ‘I know I can confide in Emily about anything. I even talk to her about mine and Javan’s sex life. It might seem odd but she’s like a sister. It never feels weird. 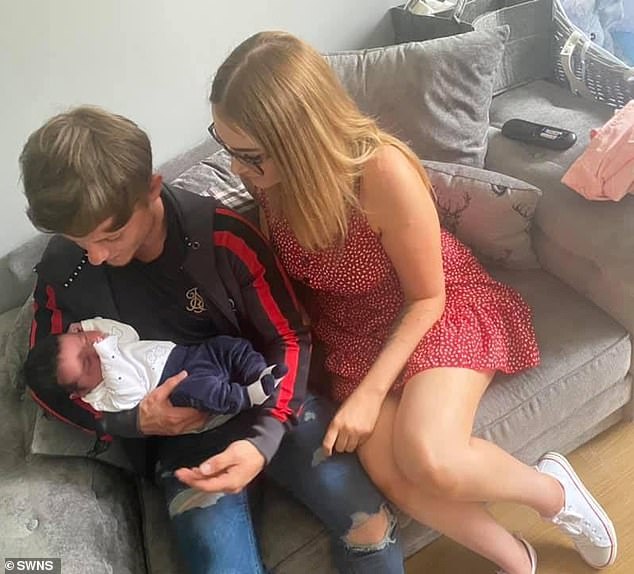 ‘Javan was away with rugby when I went into labour and because the birth was quick, Emily was there when Marcellus was born. She had Javan on face time so he could watch.’

‘Javan jokes that Emily has ‘stolen’ me from him because we spend so much time together. If we’re not on the phone we are round at each other’s houses and we walk in without asking because we’re so close. We even have matching pyjamas which we’ll probably wear on Christmas Day’

Emily adds: ‘If Emily and Javan have a row I’ll drive round to their house and pick her up.’

‘It’s never weird when she talks about Javan because we just weren’t right for each other and clashed.’

‘Now, I’m always on Kaylee’s side when they have a fall out. Javan doesn’t feel like my ex anymore and I’m happy he’s found someone he’s happy with and is like a second mum to Nevaeh.’

It was Javan that suggested the two families spend last Christmas together at Kaylee and Javan’s house.

Until then, Emily and Javan had Nevaeh on alternate Christmases which had been awkward for the pair and led to arguments.

Emily says: ‘It made sense that we all spend Christmas together so we could both see Nevaeh and neither of us was missing out.

‘It was an amazing day and Euros got along really well with Javan. Javan cooked last year too so he’s pulled the short straw again.’

‘It will be even better this year with our two new additions to the family, Dottie and Marcellus.

‘People might think our set up is strange but it’s completely normal for us and we wouldn’t change it.’

Javan says: ‘It is really nice that Kaylee and Emily get along and it’s great for our kids, especially at Christmas when we’re all together.’

‘But it does feel like Emily has stolen Kaylee away from me because they spend so much time together.’

Euros says: ‘I have never felt jealous or any bitterness about Emily hanging out with Kaylee and Javan because I know it’s just friends and I’m just not the jealous type.’

‘It’s so much easier now we all get along and it just feels really natural.’

‘I knew Javan already as we played rugby together when we were younger so we get along well but hadn’t been close until now.’

‘The friendship and Christmas plans just fell into place and it’s really good for the kids who all get along to have Christmas all together.’