Aaron Hernandez’s fiancee Shayanna Jenkins has revealed that she still believes he was innocent of the murders he was accused of when he killed himself in prison.

Jenkins, who is the mother of Hernandez’s daughter, appeared in an interview on Good Morning America on Tuesday in the wake of a Netflix documentary about Hernandez.

She cried as she said she still ‘of course’ still thinks Hernandez was innocent of the  three murders he was accused of and in prison for.

Hernandez had been acquitted in the double murders of Daniel de Abreu and Safiro Furtado and he was appealing his conviction for the murder of Odin Lloyd when he killed himself in his Massachusetts prison cell in 2017.

He had an advanced stage of CTE which causes brain damage and is common among NFL players.

Jenkins says she believes he was innocent of all three murders and that she would never have left him despite the legal saga which encircled them and had ripped him away from his other relatives. 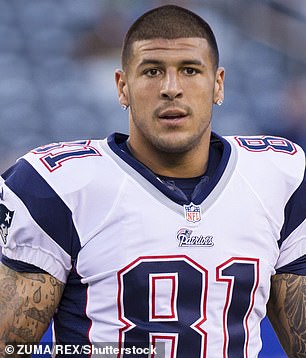 Shayanna Jenkins, Aaron Hernandez’s fiancee, said she still believes he is innocent of the three murders he was accused of in an interview on Wednesday morning

THIS MORNING on @GMA: The late Aaron Hernandez’s fiancée – and mother of his daughter – tells her story for the first time. What does she say that’s not in the explosive documentary? Find out COMING UP only on @GMA. pic.twitter.com/2dJsQ4N2bt

‘Yes I of course I do (think he’s innocent). ‘I’d be a cold person to leave someone that had nobody at all,’ she said.

She also addressed her late fiance’s sexuality. Since his death, it has emerged Hernandez was having an affair with another male inmate.

In the new Netflix documentary, other men – including years long friends – said they too had sexual contact with him.

Jenkins said she was unaware of his bisexuality but that she wished he had confided in her about it because it is ‘not shameful’.

It’s not shameful and I don’t think anybody should feel shameful on who they are inside, regardless of who they love. ‘I think it’s a beautiful thing. I just wish I was able to tell him that

She also abhorred Netflix for making a movie which focused largely on his sexuality, saying it was inappropriate because he is not here to discuss it himself.

”You can’t describe someone’s sexuality without them being here although I’ve had a child with Aaron, I still cant tell you how he was feeling inside. No one can.

‘If he did feel that way, or, if he felt the urge, I wish that I was told.

‘I would not have loved him any differently, I would have understood.

‘It’s not shameful and I don’t think anybody should feel shameful on who they are inside, regardless of who they love.

‘I think it’s a beautiful thing. I just wish I was able to tell him that,’ she said, wiping away tears from her eyes. 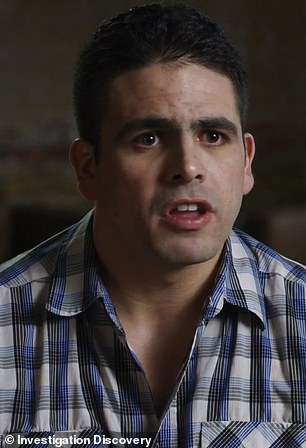 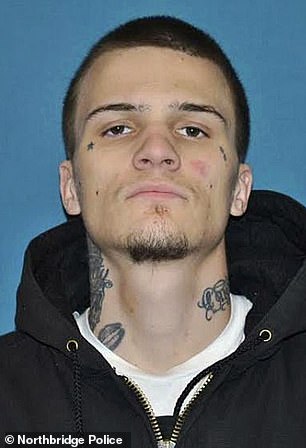 Dennis SanSoucie (left) said he was Hernandez’s high school friend but that they also had sex in secret. Kyle Kennedy (right) claims he had an affair with Hernandez in prison

She went on to say it was difficult listening to recordings of their phone calls from when he was in jail that Netflix obtained and included in the documentary.

‘It’s just again very hard to hear, especially with my daughter being a minor – hearing sacred… those are things as a mother you want to keep to yourself,’ she said.

Jenkins said Netflix offered to pay her to appear in the film but that she declined.

‘I was approached, they offered compensation for my participation [but] I wanted to leave it in the past and let my daughter grow without her having to have bad memories to look back on,’ she said.

Shayanna said she wants their daughter, who is now eight, to be form her own opinion of her father.

‘I would describe her father as a loving individual who obviously loved her, it’s more bringing back the memories for her and let her form her own opinion.’ 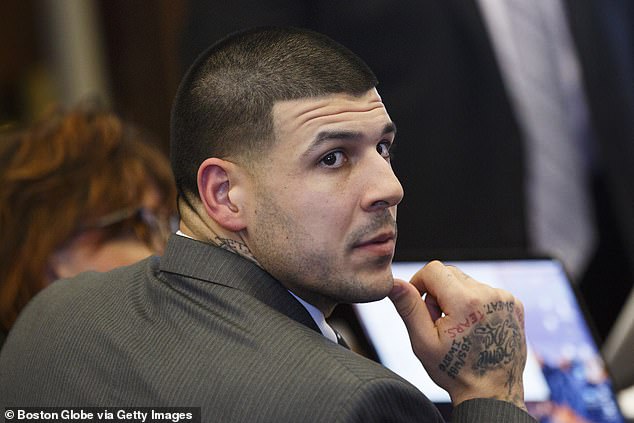 Hernandez in court in March 2017. He took his life a month later while in prison

The GMA interview is not her first.

In 2017, she appeared on Dr. Phil where she said it was untrue he had sexual relationships with men.

Hernndez’s lawyer Jose Baez, who famously represented Casey Anthony, did appear in the documentary but he says it was under false pretenses.

He claimed to Good Morning America that he agreed only to be part of the Netflix project on the condition that Hernandez’s sexuality was not discussed.

‘I agreed to be part of the documentary based on a representation that certain people would be taken out that were discussing his sexuality.

‘After I was done [filming], they went back on that promise and that’s the issue I have,’ he said.

He added that there was no sense in speculating what may have driven Hernandez to suicide when it was clear from his autopsy that he was in an advanced stage of CTE.

‘They’re trying to find a simple answer for a complex situation. 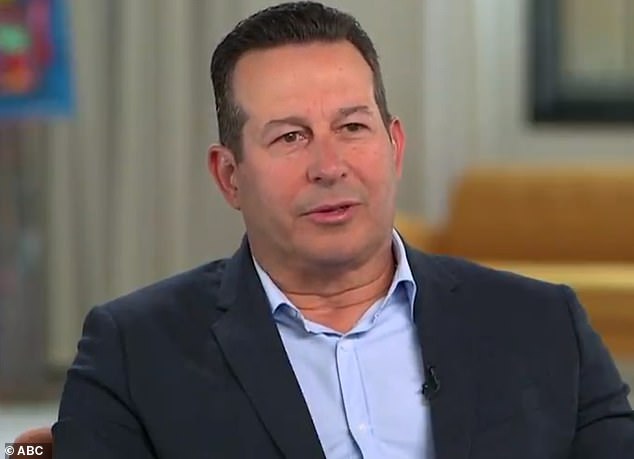 Jose Baez, Hernandez’s lawyer, said on Wednesday he would not have taken part in the Netflix documentary if he had known Hernandez’s sexuality would be such a big part of it

‘His health was a huge factor. I don’t know why we need to search around for an answer as to why he committed suicide when he was at an advanced stage of a disease when the primary [side effect] is suicide severe brain damage.

‘What more do you need to look at except to assume something?’

SanSoucie said they began exploring a sexual relationship in middle school which continued into high school. The two were on the same Bristol Central High School’s football team as teens.

‘We prided ourselves on sports and if anyone knew that we had gay sexual activity together our lives would be ruined,’ SanSoucie said in an Investigation Discovery documentary. ‘We were just in complete denial of what was really going on.’

The film also touches on how Hernandez’s father would not have approved of his son being gay and was described as the type of dad who would ‘slap the f***ot out of you’.