Aaron Hernandez’s ‘widow’ is pregnant with another man’s baby

The former fiancee of Aaaron Hernandez is pregnant with another man’s baby according to a report in People.

An unnamed individual who played college football with Hernandez at the University of Florida said he believes the child Shayanna Jenkins is carrying was fathered by another man and not artificial insemination.

He also said Hernandez would be so happy with the news.

‘Aaron had demons; we all know that,’ said the man.

‘But he really was devoted to his daughter. Boy, did he love her. I think he’d be very glad to know that she was going to have a little sister.’

Jenkins announced on Tuesday that she is pregnant with her second child.

‘Many of you have had speculated that I may be expecting another miracle which is very accurate , I wanted to take time and process and post when I was ready to. I wanted to have a moment for myself alone with my daughter,’ wrote Jenkins.

‘We are beyond excited about the new addition and chapter we will soon begin.’

Pregnant pause: S’hayanna Jenkins announced on Instagram that she is pregnant with a baby girl (above) 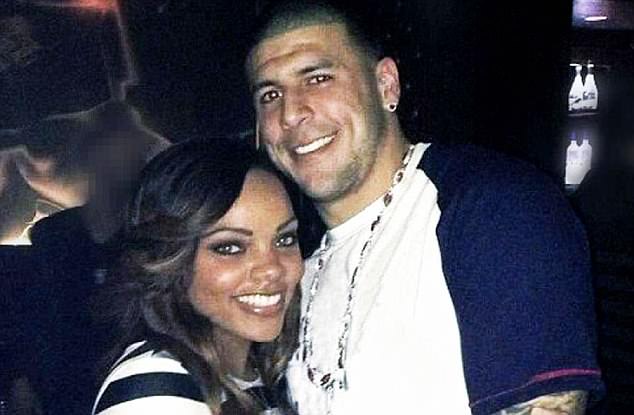 Ex factor: She shared the news 13 months after the death of Aaron Hernandez, whose surname she took in the months before his suicide after years of being engaged 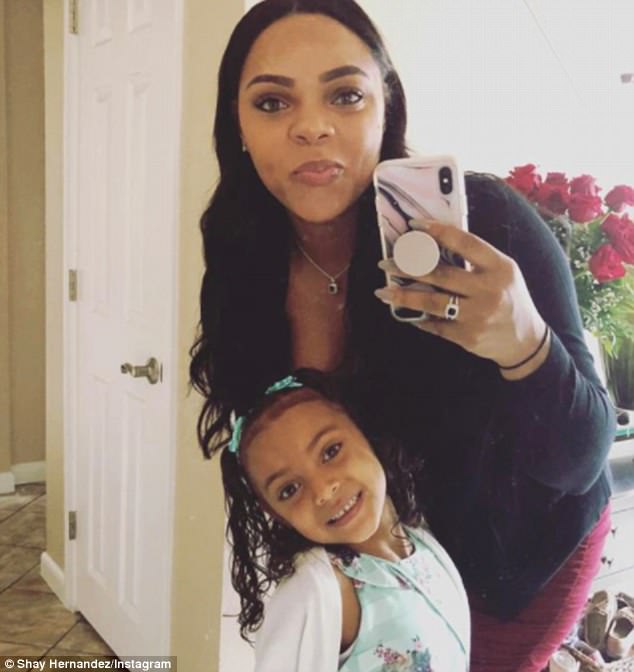 Faithful: Jenkins was still wearing her engagement ring in a photo she posted last month (above)

News of the baby comes 13 months after Hernandez was found dead in his jail cell after hanging himself.

Jenkins took the football player’s surname in the months before his death and the two had been engaged for years, leading to speculation they had been married prior to his suicide.

Jenkins makes no mention however of the baby’s father, and she was still wearing the engagement ring that Hernandez gave her in a photo from April 1, and in a throwback picture a few days prior wore a Patriots jersey with Hernandez’s number that said ‘WIFEY.’

‘I couldn’t be a luckier woman to have such a perfect little girl that’s prepared to become the best big sister , and even more blessed to welcome another baby girl to our home,’ said jenkins in her post.

‘Baby G we are very excited to meet you !!! Mommy and sissy will continue to wait patiently for your arrival. I thank everyone for the continued support and appreciate the respect for our privacy that has been shown.’

It seems that one day prior she may have been grapling with her situation and going public with the news based on a post she shared on the same account.

‘But today I look at myself and think no one will ever make me feel that pain again. I am strong and will always be.’

Jenkins made headlines earlier this year when she sued the estates of three men the former New England Patriots player was charged with killing in an effort to ensure their daughter benefits from the sale of their home. The families of Odin Lloyd, Daniel de Abreu and Safiro Furtado filed wrongful-death lawsuits against Hernandez’s estate, and should they win those cases, money from the mansion’s sale could be used to pay damages.

Jenkins filed on behalf of her daughter, 5, and requested a trial to determine whether Hernandez’s declaration of homestead remains in effect.

The Massachusetts Homestead Act protects up to $500,000 of a property’s equity from creditors.

Hernandez was acquitted of killing Abreu and Furtado days before his prison suicide. and his death erased his 2015 conviction in Lloyd’s killing due to an obscure legal doctrine in the state of Massachusetts.

Jenkins and her daughter are also suing the New England Patriots.

A lawsuit filed last year on behalf of the two by Jose Baez said Hernandez had ‘the most severe case of Chronic Traumatic Encephalopathy medically seen in a person of his young age of 28 years’ by Boston University researchers.

The lawsuit also named the NFL initially, but they were then dropped as defendants in the case.

Hernandez had just signed a seven-year, $40 million contract with the Patriots prior to the 2012 season, one of the biggest contracts in the league at the time. 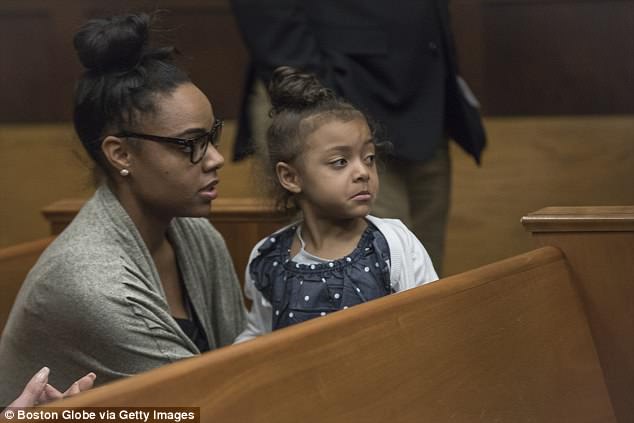 Court: Hernandez had been charged with killing three men prior to his death, Odin Lloyd, Daniel de Abreu and Safiro Furtado (Jenkins and her daughter above in April 2017) 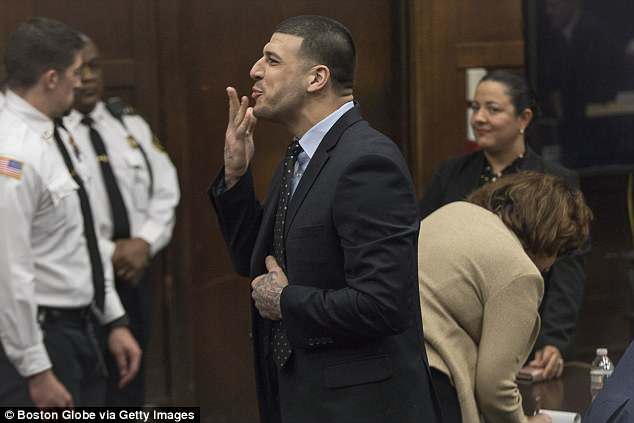 Blowing a kiss: Hernandez was acquitted of killing Abreu and Furtado days before his prison suicide and his death erased his 2015 conviction in Lloyd’s killing (Hernandez in April 2017 shortly before his death) 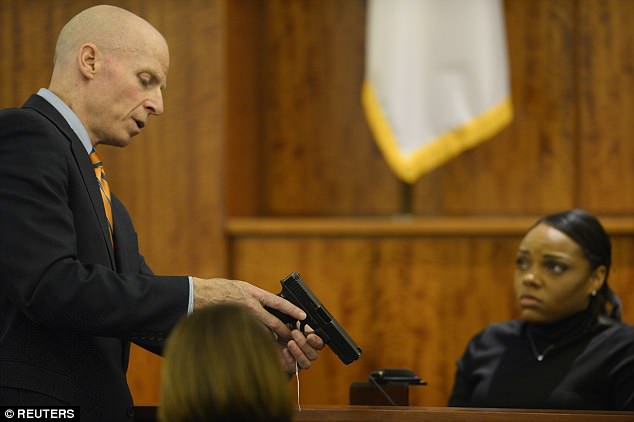 Gun: Lloyd was dating Jenkins’ sister Shaneah at the time of his death (Jenkins on the stand in March 2015 testifying in the murder trial of Lloyd on behalf of the defense)

Prior to his time in New England he had numerous run-ins with the law during his college football career at the University of Florida.

Jenkins stood by Hernandez’s side throughout his trial, and in the aftermath dismissed claims that he was gay, despite his prison lover speaking out and exes confirming they knew about his predilection for members of his sex.

When asked about his prison lover on an episode of Dr. Phil, Jenkins said: ‘I don’t know who this Kyle Kennedy is. Aaron never mentioned him.’

Jenkins also claimed that Kennedy lied about getting a love letter from Hernandez after his death, with the football player leaving three notes.

The state police report said Hernandez wrote “John 3:16,” a reference to a Bible verse, in ink on his forehead and in blood on a cell wall.

The verse says: ‘For God so loved the world, that he gave his only begotten Son, that whosoever believeth in him should not perish, but have everlasting life.’

A Bible was nearby, open to John 3:16, with the verse marked by a drop of blood.

Some inmates have said Hernandez had become increasingly spiritual during his time in prison, but Jenkins said the bible verse didn’t sound like Hernandez and he’d never mentioned it to her.

Hernandez wrote in her letter to Jenkins ‘you’re rich,’ which led many to believe there was money hidden away for his widow.

Jenkins also said shortly after Hernandez’s death that she did not believe he had committed suicide.