After equaling Maris with his 61st in Toronto on September 28, the Yankees hero overtook him in Texas with a first-inning homer against the Rangers – taking the record with just one game to go of the regular season.

Judge finally went long after failing to clinch the achievement at Yankee Stadium last week, leaving it to the team’s final road trip of the season to seal history.

He finally made history Tuesday night against Jesus Tinoco of the Texas Rangers in the second game of the Yankees double header.

The 6ft 7 slugger had previously made fans wait as he aimed to level Maris, going seven games without hitting a homer as the pressure appeared to weigh heavy on him.

The Yankees secured the American League East title the night before Judge’s 61st homer, though, and that appeared to have taken the pressure off his shoulders.

In the first game of Tuesday’s doubleheader, Judge went one for five as the designated hitter, singling and scoring the eighth inning.

The tension finally appeared to be getting to him as his frustration boiled over in the dugout where he was seen slamming his helmet to the ground in anger.

Across the whole of Major League Baseball, Judge’s 62nd home run of the season takes him to sixth on the all-time list, behind Barry Bonds (73), Mark McGwire (70, 65) and Sammy Sosa (66, 64, 63), although media reports have previously linked all three with performance-enhancing drug use. 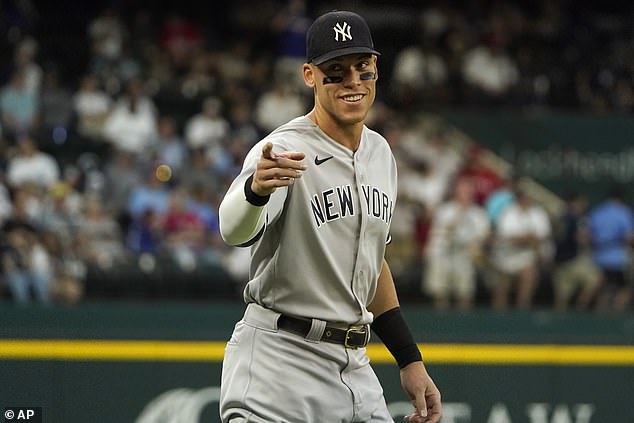 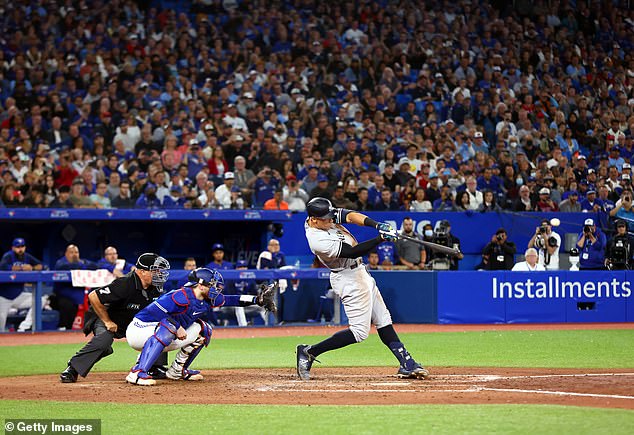 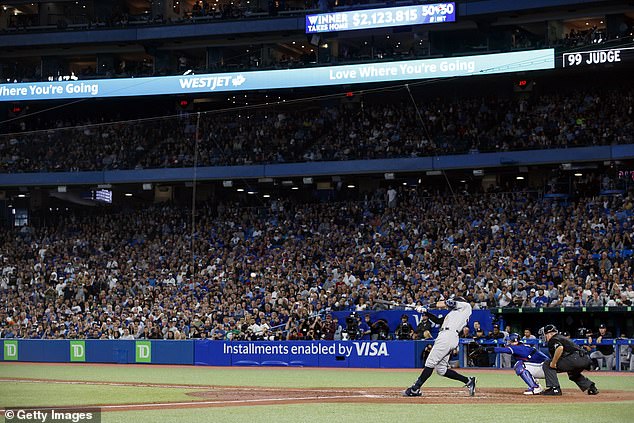 After a long wait, Judge finally dealt the historic blow in the seventh inning in Canada 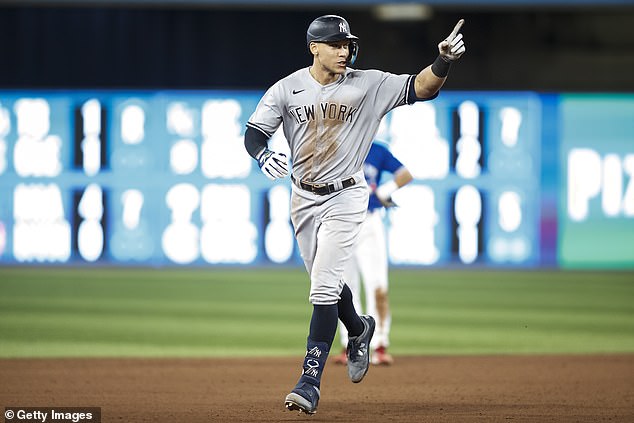 As he made his way round the bases, Judge pointed towards his Yankees team watching on

Judge, Maris, and Babe Ruth – who Judge passed earlier in the season – remain free of any such allegations.

‘That’s the record,’ said Judge, who graduated from Linden High School in San Joaquin County, about an hour and a half east of the San Francisco Bay. ‘I watched him do it. I stayed up late watching him do it. That’s the record. No one can take that from him.’

Speaking after levelling Maris’ record in Toronto last month, Judge said: ‘I was just trying to go up there, start a rally and get something going. It’s an incredible honor, a lot of emotions and it took me a little longer than I wanted it to.

‘It was a chance to add two more runs to the board and another win. I tried to soak in the moment, it worked out. 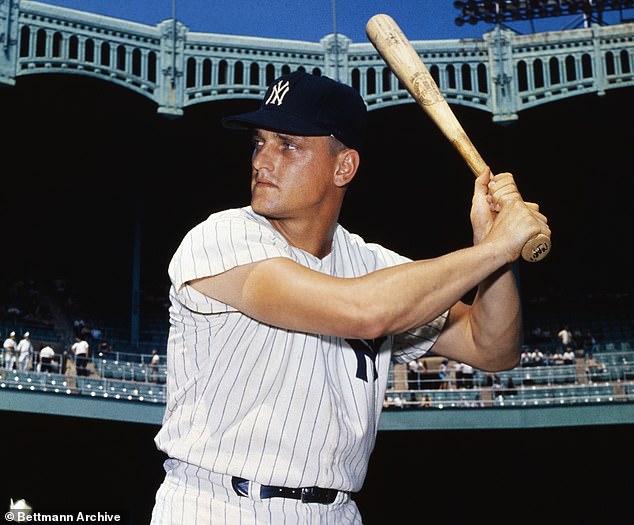 Judge has now overtaken Maris’ American League record, which he set 61 years ago in 1961 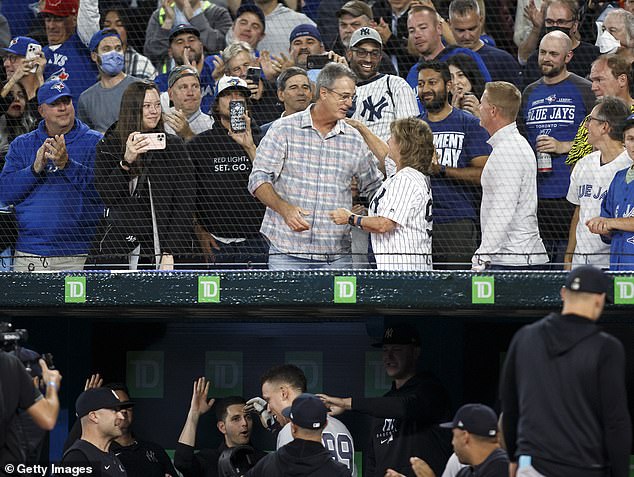 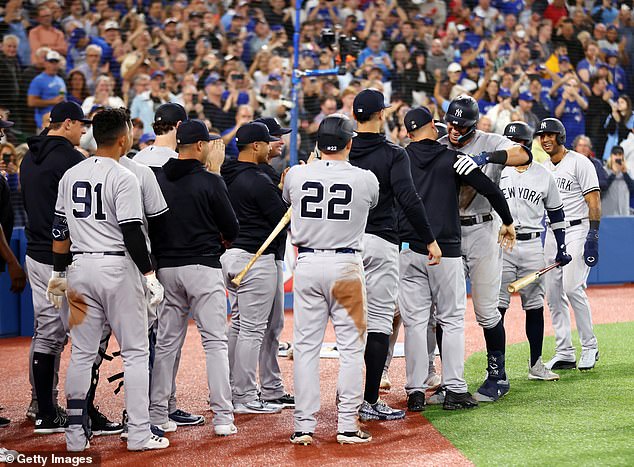 Each Yankee hugged Judge after he went round the bases after a seven-game wait for No. 61

‘Seeing the love from my team-mates, I do what I do for them, I will share that moment for them. I’m nothing without my family, they mean the world to me, the reason why I am here and the reason that I am who I am.

‘I gave a nod to Roger Maris JR, it means a lot that he showed up here. I love these moments, a moment like that, those are the moments you look for.’

There has been a lot of talk about the value of his 62nd home run ball, with some experts claiming it could be worth up to $10million in the future. 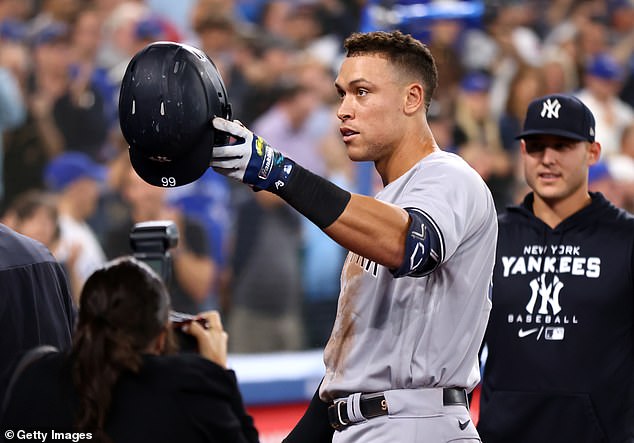 Judge acknowledged his mother, who was watching on from the stands, after he hit 61 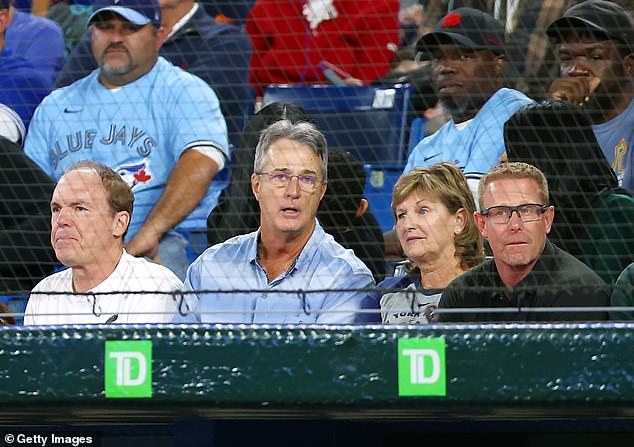 Roger Maris Jr. (2nd L) talks with with Patty Judge (2nd R), the mother of New York Yankees slugger Aaron Judge during a game between the Yankees and the Toronto Blue Jays in the ninth inning at Rogers Centre on September 26

The 61st ball, meanwhile, has been valued at $2m, but it did not make it into the hands of any fan, dropping just short and into the Blue Jays’ bullpen, where a coach then gave it to Judge, who in turn gifted it to his mother.

Remarkably, Judge reached 61 homers 61 years after Maris set the record himself in 1961.

Judge is also in contention to win the Triple Crown by currently leading the American League in batting average (.313) and RBIs (130). If he went on to achieve rare feat, he would be the first Yankee to do so since Mickey Mantle did it 66 years ago.