Green Bay Packers quarterback Aaron Rodgers won’t face discipline from the NFL over his revelation that he used ayahuasca.

Rodgers recently said on the ‘The Aubrey Marcus Podcast’ that he drank the hallucinogenic beverage during a 2020 trip to Peru, and he emerged with ‘a deep and meaningful appreciation for life.’

However, because ayahuasca isn’t on the list of banned substances per the collective bargaining agreement between the league and the players’ union, Rodgers couldn’t get into trouble for using it, NFL spokesman Brian McCarthy said Monday, according to the Milwaukee Journal Sentinel.

Aaron Rodgers, 38, revealed on the Aubrey Marcus Podcast that his past use of psychedelic drugs improved his mental health, and ultimately led him to the ‘best season’ of his NFL career 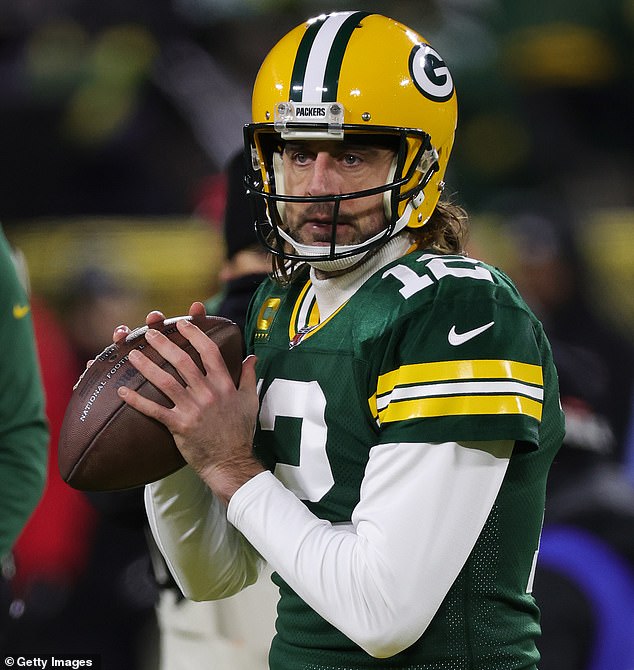 Ayahuasca is a hallucinogenic drink that is illegal in the UK and US but widely used by tribal societies in the Amazon basin.

Shamans consider ayahuasca a ‘wisdom’ plant that allows an entry into the spiritual world, and it was recognised as such by the government of Peru in 2008.

It can cause hallucinations that are similar to the effects of LSD or magic mushrooms, according to Talk to Frank. They last for two hours and are ‘usually pleasurable’ but can cause panic and horrifying flashbacks, the website says.

The negative emotional effects from taking ayahuasca can last for days, and make it especially dangerous for people with mental health problems.

It can also raise blood pressure and heart rate and may harm those with a pre-existing heart condition.

Rodgers stated his belief that using ayahuasca helped him to his MVP season in 2020, when he posted league highs in completion rate (70.7 percent) and touchdown passes (48).

He came back to earn his second straight MVP award, and the fourth of his career, in 2021, when he threw for 4,115 yards, 37 touchdowns and four interceptions as the Packers went 13-4.

However, the Packers were upset in their first playoff game, falling 13-10 to the visiting San Francisco 49ers in the divisional round.

‘To me, one of the core tenets of your mental health is that self-love,’ Rodgers told host Aubrey Marcus. ‘That’s what ayahuasca did for me, was help me see how to unconditionally love myself.

‘It’s only in that unconditional self-love, that then I’m able to truly be able to unconditionally love others. And what better way to work on my mental health than to have an experience like that?

The former Super Bowl champ told the podcast this week that he noticed a significant change in his relationship with the Packers since he took the plant-based psychedelic ayahuasca – and believes the experience with the drug and winning the MVPs were connected. 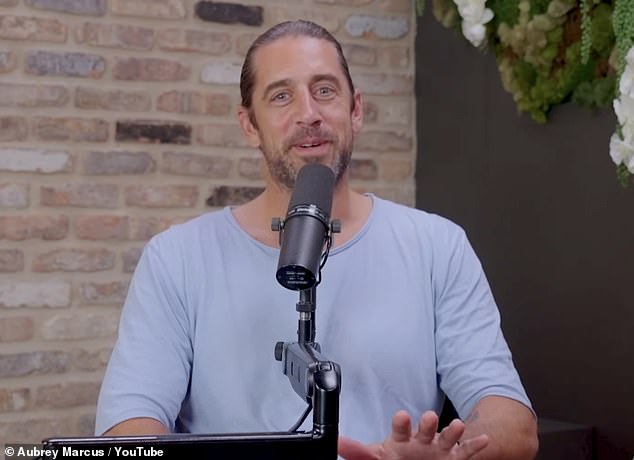 ‘I don’t think it’s a coincidence,’ Rodgers said. ‘I really don’t. I don’t really believe in coincidences at this point. It’s the universe bringing things to happen when they’re supposed to happen.’

‘There’s signs and synchronicities all around us at all times if we’re awake enough to see them and to take them in and to listen to our intuition when it’s speaking to us or pounding us in the head saying, ‘Hey dummy, this is what you’re supposed to be doing.’

He recalled: ‘I laid there afterward on my mat and then opened my eyes and it felt like I was opening my eyes for the first time.

‘I really feel like that experience paved the way for me to have the best season of my career.’

‘The greatest gift I can give my teammates, in my opinion, is to be able to show up and to be someone who can model unconditional love to them,’ the four-time NFL MVP continued.

‘They won’t care about what you say until they know how much you care.’