Built to last, built to impress, built with style and grandeur – and now besieged by nature and suspended in time.

From imperial residences and aristocratic estates to hotels and urban mansions, new book Abandoned Palaces by Michael Kerrigan contains remarkable pictures of ostentatious buildings that have fallen into ruin.

The tome also explains the fascinating reasons for their demise, which include politics, bankruptcy, personal tragedies, natural and manmade disasters, as well as changing tastes and fashions.

Michael said: ‘Their dereliction in some sense defines them, delineates their connection with their own past; all that dirt and damage represents the wear and tear of history. There’s something especially poignant about a palatial ruin, whether that of an actual palace or of a prestigious hotel or townhouse.’

Scroll down to see MailOnline Travel’s pick of 20 out of the 150 haunting images that appear in the book, with captions courtesy of the author…

The daughters of New York State’s elite spent the halcyon (or, at least, formative) days of their young womanhood at Bennett, pictured, once a highly prestigious college in New York. It had, however, undergone a long decline through the mid-century as mixed education became the norm and finally gave up the ghost in 1978. Its main building, Halcyon Hall, dating from 1893, had been distinguished in its day: it certainly makes an atmospheric ruin 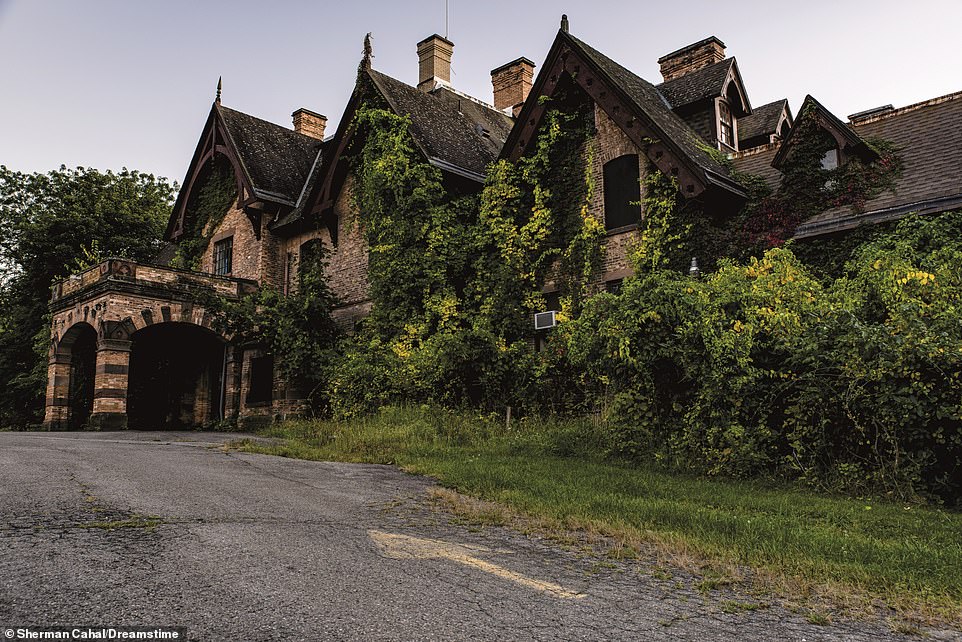 General Joseph Howland (1834–86) was born into stupendous wealth in New York, his family having made its fortune in the China trade. He gave much of it away, as a lifelong philanthropist, endowing libraries and hospitals in the vicinity of Beacon, but the estate at Tioronda in New York, pictured, was a present to himself. After his death, however, it became a mental hospital until it was abandoned in 1999 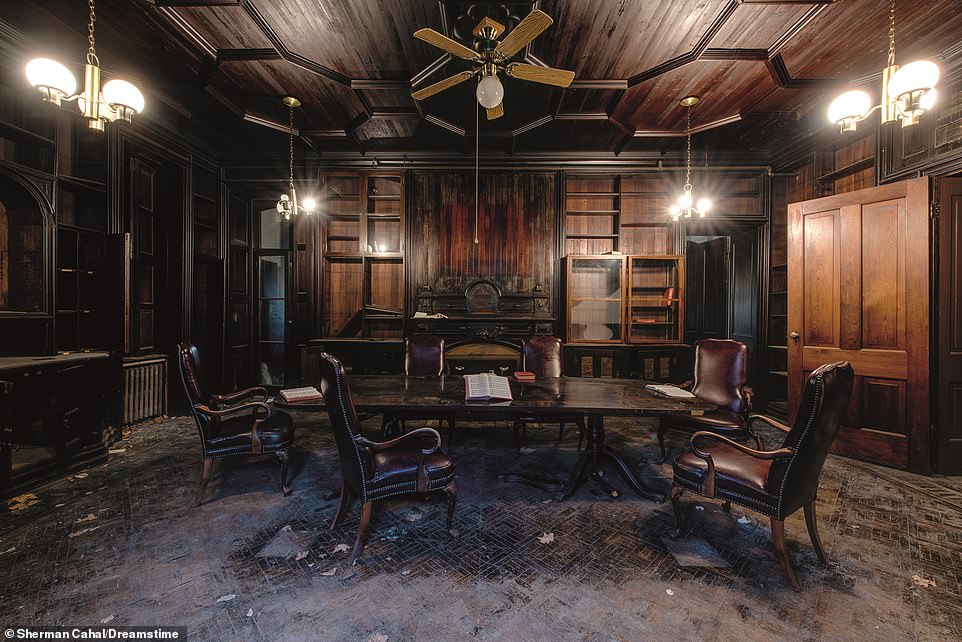 General Howland’s hope had been that Tioronda would be a kind of rustic retreat where he could live in quiet comfort in the style of an English squire. It wasn’t to be: his peace and quiet were first interrupted by the Civil War (in which he fought bravely and won his rank as a general) and then by public duties (including a term as State Treasurer for New York). Pictured is the house’s interior 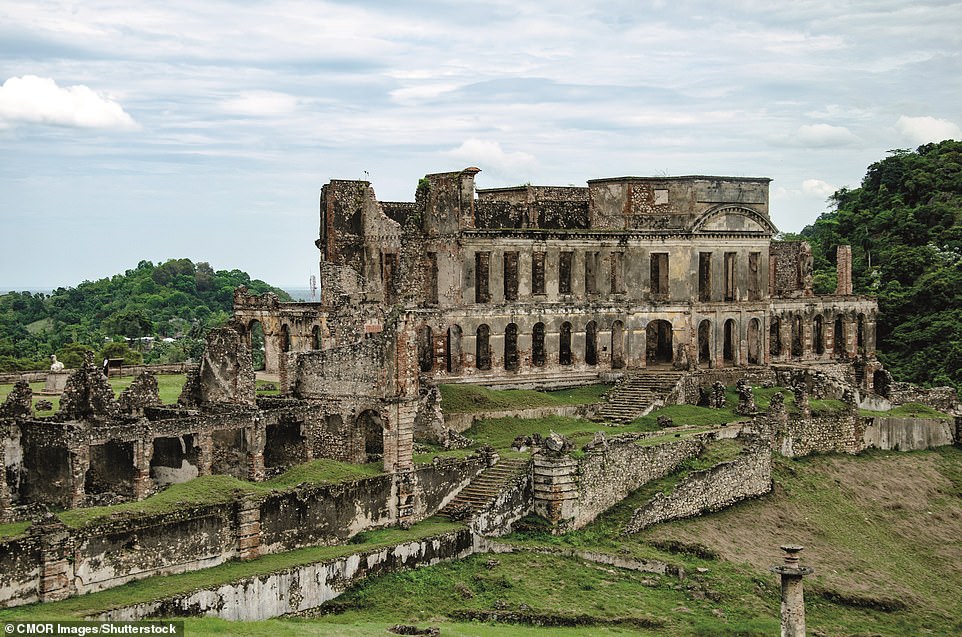 King Henri Christophe (1767–1820; reigned 1811–20), from British Grenada, built the Sans Souci palace in Haiti, pictured. A former slave, he’d played a leading part in the fight for freedom against the French colonisers. Elected president of an independent Haiti, he had then turned tyrant, founding his own kingdom in the north of the island state. Sans Souci (‘Without Care’) was just the largest of his many royal residences. In 1842, it was badly damaged by an earthquake and abandoned 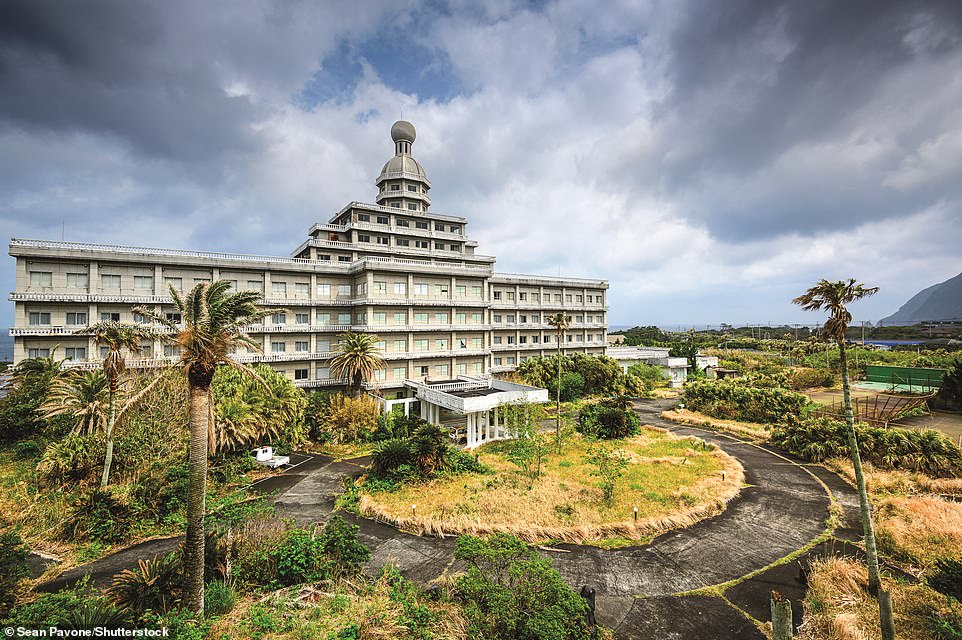 In the early 1960s, Japan was economically on the rise but a cautious government discouraged foreign travel. Instead, the newly affluent were encouraged to find their jet-set luxury nearer home: Hachijojima was being billed as the ‘Hawaii of Japan’. The Royal Hotel, pictured, was its five-star centrepiece: French Baroque met modern brutalism in its design. In fairness, its guests were happy here and the hotel was a huge success – till restrictions were relaxed and alternative destinations brought within their reach. In the 1990s, the hotel closed, since which time it has stood empty, gradually decaying 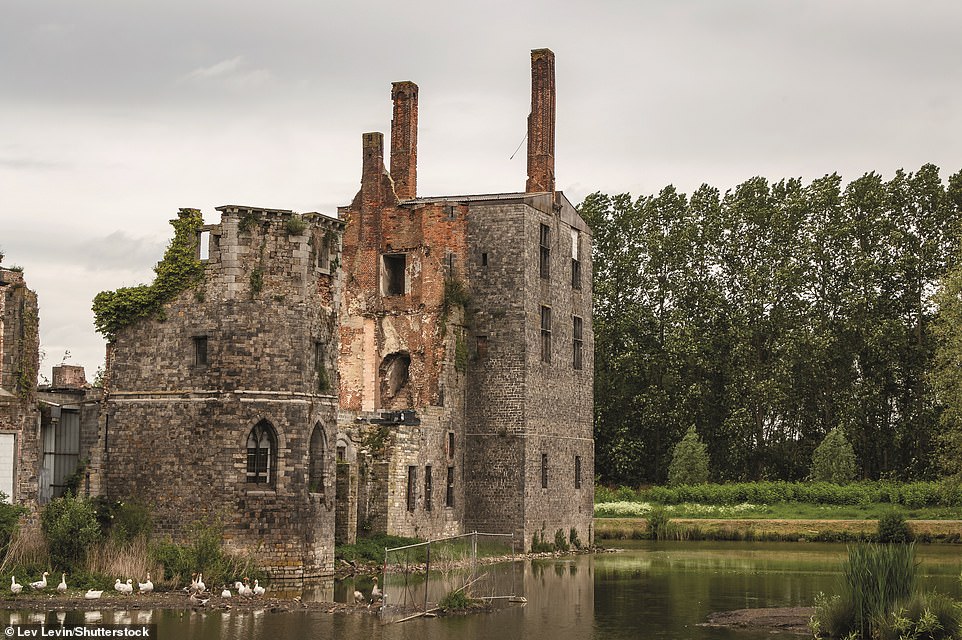 The fortress of Havré Castle in Belgium saw serious action in the 16th century when Don John of Austria besieged it on behalf of Spain, which claimed the Low Countries. But Havré was held successfully by the Belgians. In the 17th century it was modernised and made over into a château-style country house. Since the start of the 20th-century, it has been unoccupied and besieged by nature 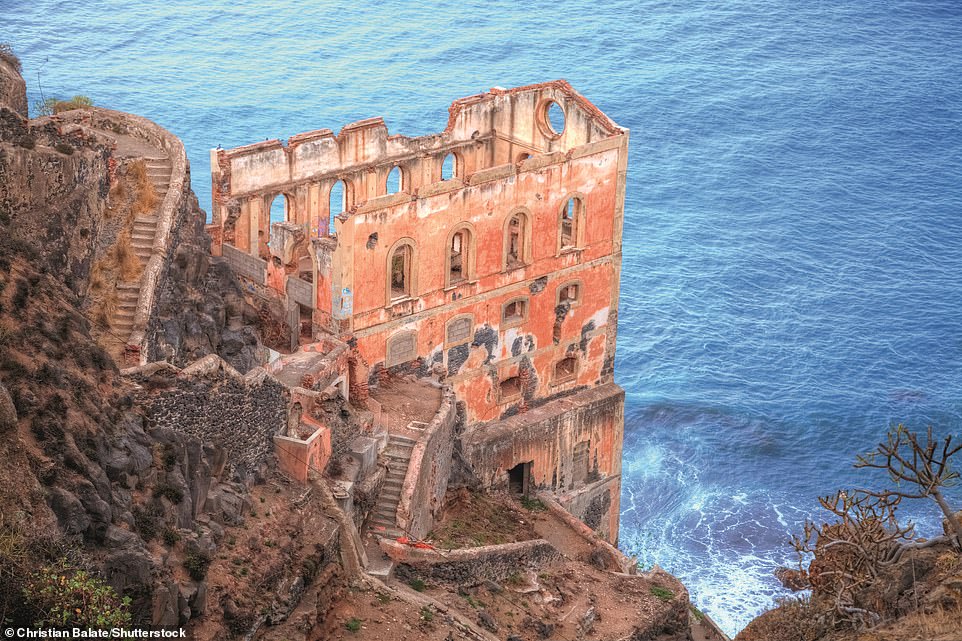 Despite its location perched precipitously above the sea, Gordejula Water Elevator in Tenerife pumped fresh water from the Gordejuela Springs to a reservoir on the hillside high above. It was worked by Los Realejos’ first steam engine, which forced the springwater along a two-kilometre (1.25-mile) pipeline, then distributed it around the island’s banana plantations by aqueduct and ditch. Opened in 1904, it performed impeccably – but closed just 15 years later as local fruit was priced out by cheaper products from the Caribbean 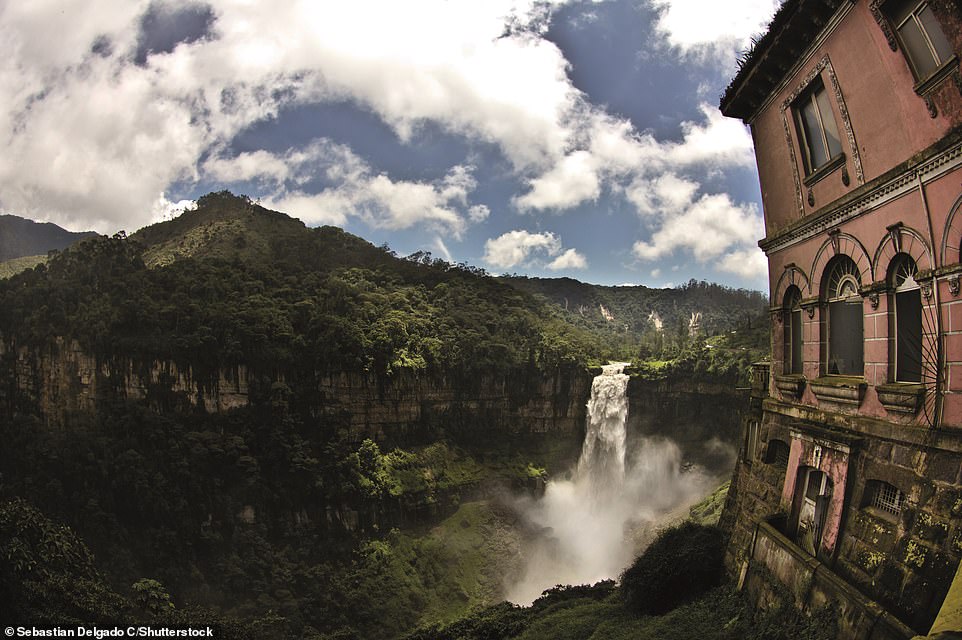 Hotel del Salto in Santandercito, Colombia, was spectacularly situated beside the Tequendama Falls on the Bogotá River 30km (19 miles) west of the Colombian capital. Literally, the ‘Hotel of the Jump or Leap’, it was originally built in 1923 as a private mansion, becoming a hotel just five years later. Water management and construction work nearby left the river hopelessly contaminated and the hotel was forced to close its doors in 1940. It remained in its abandoned state until 2014, when it was renovated for use as a biodiversity museum 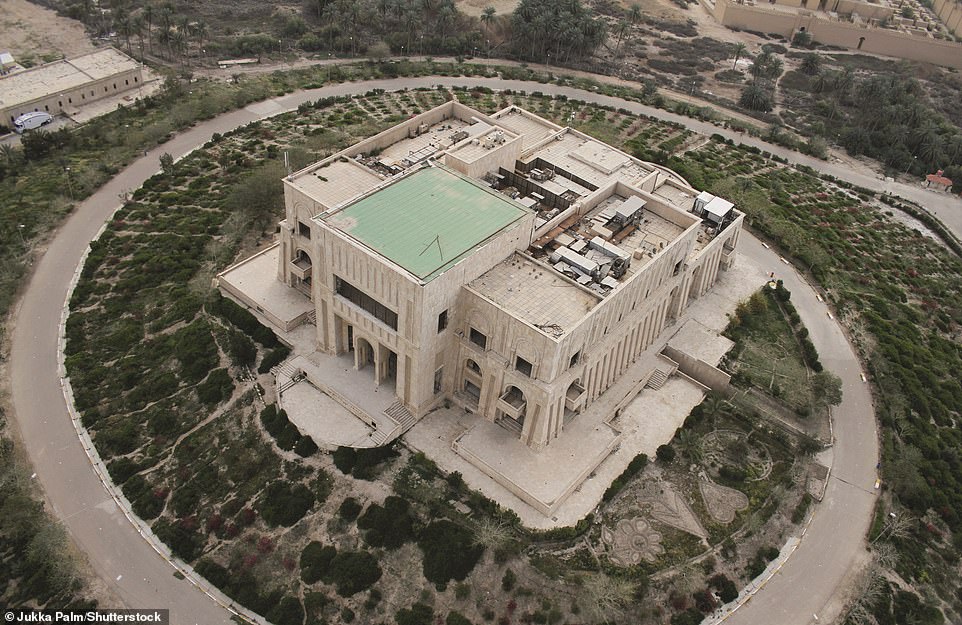 Saddam Hussein’s Palace in Babil Governorate is a homage to Babylon and is now as much a ruin as the real thing, on whose foundations this residence was built. Allegedly, it is a replica of the palace of Saddam’s (equally despotic) predecessor Nebuchadnezzar II (c. 605 bce). In practice, as magnificent as it no doubt was, that building was – like all Mesopotamian monuments – of mud-brick construction. Its structures, and their design details, have been long since lost 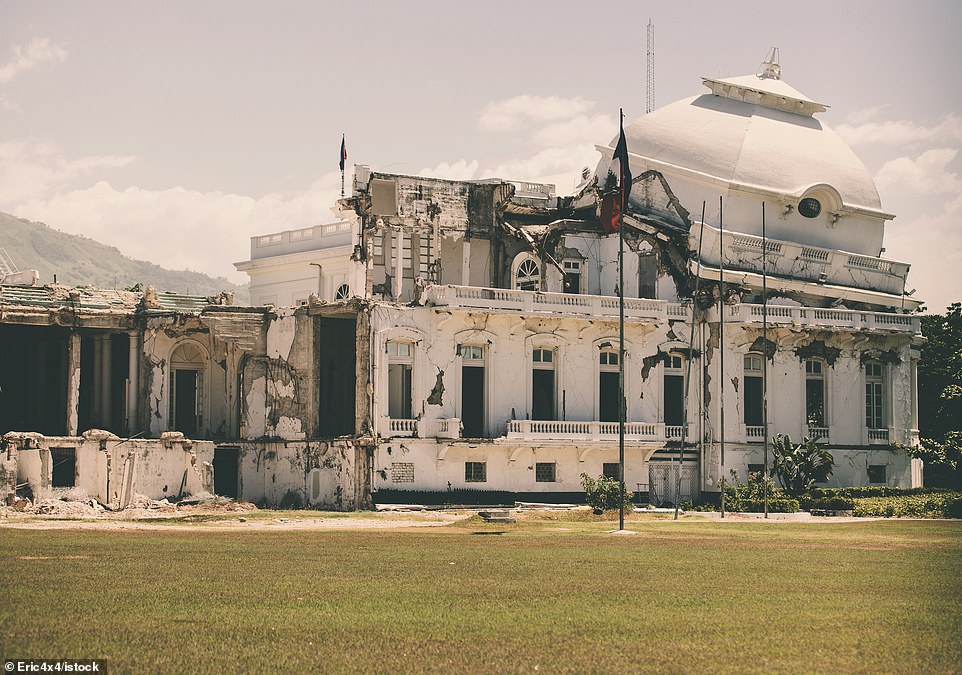 After a powerful earthquake hit Haiti in January 2010, the collapsed cupola of the presidential palace, pictured, became a fitting emblem for a country on its knees. Many tens of thousands of lives were claimed by the disaster itself, hundreds of thousands more as, in the weeks and months that followed, disease and disorder took its toll on what was already the poorest country in the Northern Hemisphere 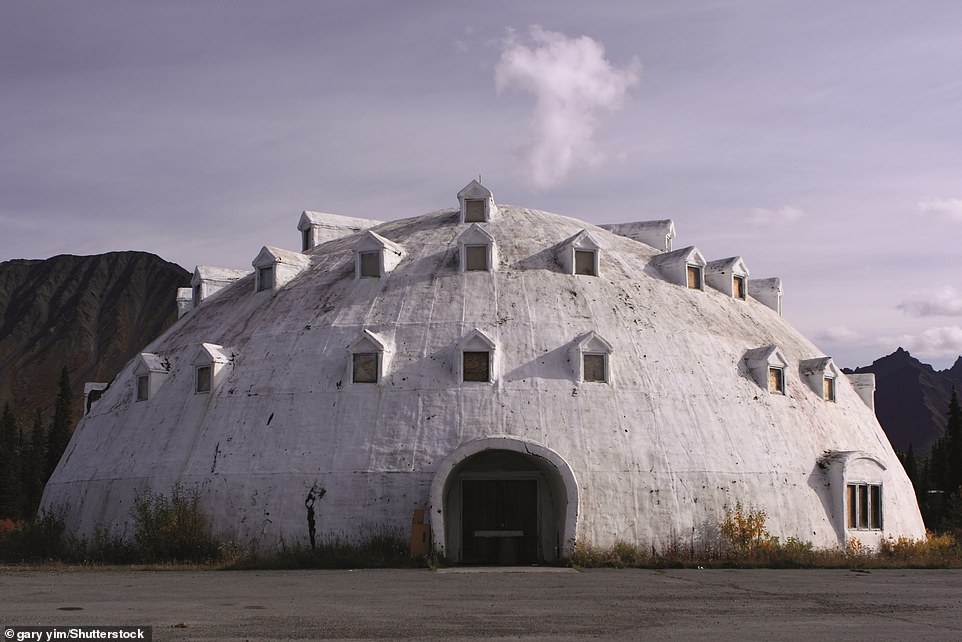 There was never a functioning hotel here, still less the ‘igloo city’ the 1970s developers envisaged. This giant concrete igloo [hotel] was supposed to tempt tourists to break the 580-km (360-mile) journey between Fairbanks and Anchorage in Alaska; and so it might have done, had its builders only been able to meet the required regulations. Standing 24m (80ft) tall and 32m (105ft) wide, this freakish concrete structure was lined with plywood. Local entrepreneur Leon Smith (1921–99) started trying to achieve his vision in 1972, but state bureaucrats were to dash his dreams. Inspectors looked askance at the lack of windows, essential though this was to the ‘igloo’ effect – but there seems to have been several other violations, too 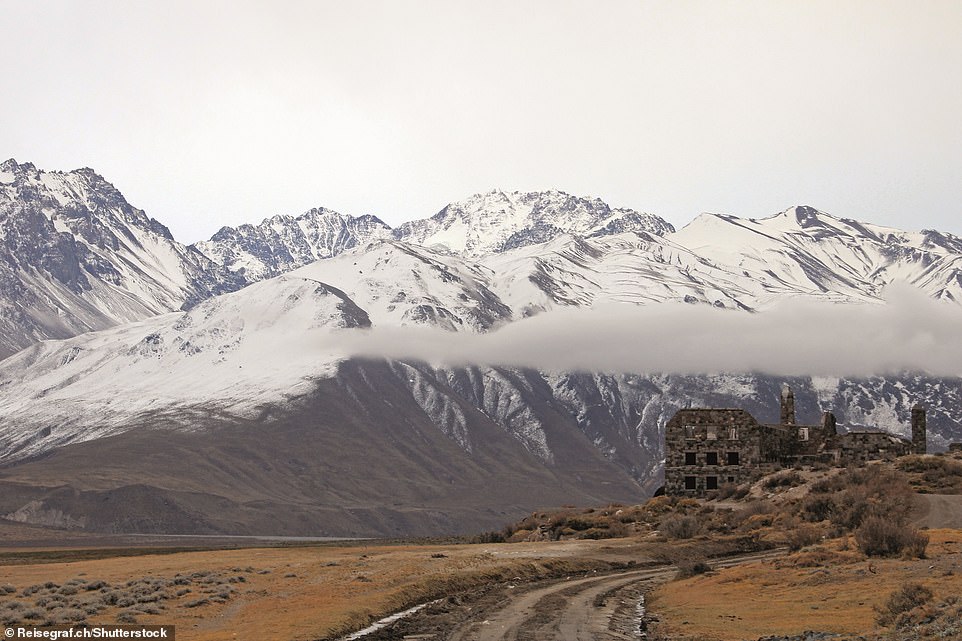 The hallways of the Sonsneado Hot Springs Hotel in Mendoza once rang with the cheerful greetings of exclusive guests while the pools echoed with their happy plunges. But this spa, opened in 1938, was abandoned only 15 years later. All is still and silent now, in an empty, austere landscape, the snow-shrouded Andes brooding in the background 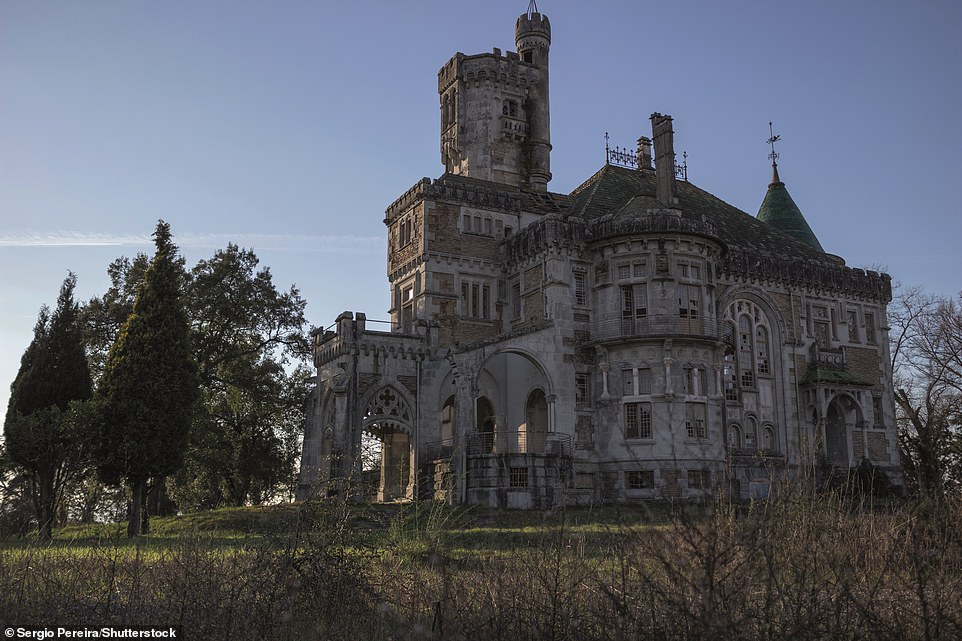 ‘Dona Chica’ was the title popularly given in Palmeira, Portugal, to the local landowner’s Brazilian born wife, Francisca Peixoto Rego (1895–1958). Swiss architect Ernst Korrod (1870–1944) was commissioned to create a home appropriate to her prestige and beauty. This extravagantly romantic pile was the result. As the monument to a marriage, it proved melancholy: work was abandoned in 1919 when the couple parted. Though attempts were made to resume construction, this was invariably frustrated by financial or administrative problems, so Dona Chica’s Castle still stands abandoned 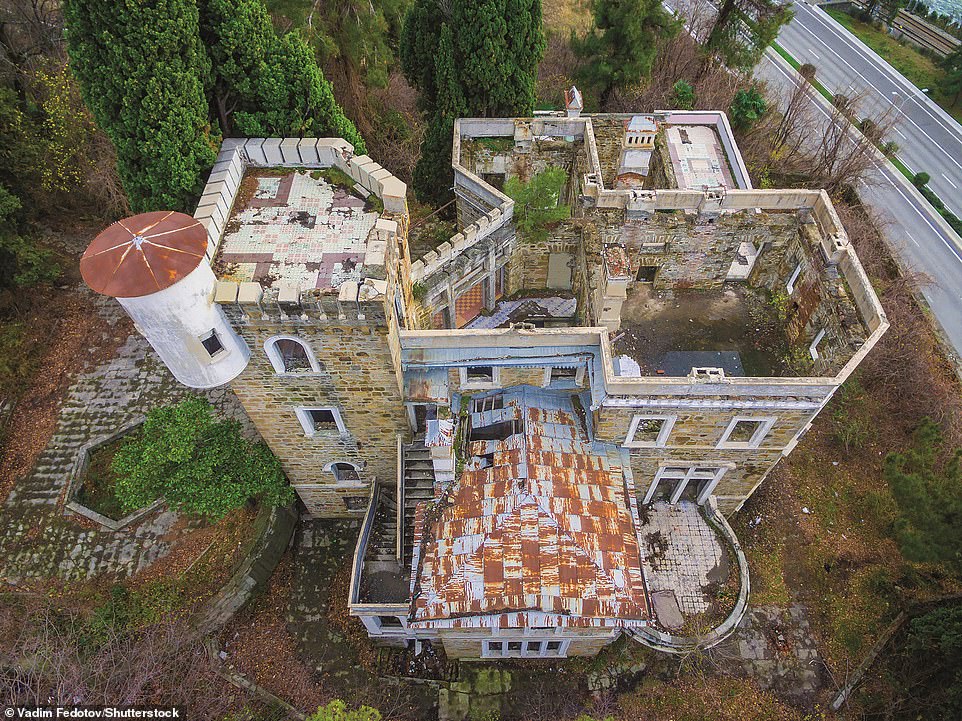 Dacha Kvitko is an extravagant castle-like construction that stands by the Black Sea shore, beside the coast road just a short way south of Sochi in Russia. It dates from the early days of the area’s opening up as a subtropical seaside resort at the turn of the 20th century. This continued unabated into the Soviet era while acquiring a new aesthetic (modern, constructivist…) and social tone (official, workerist…). Big, barracks-like hotels sprang up in Stalin’s time, arguably more reminiscent of Hitler’s Prora than of what might be expected on any ‘Riviera’. Dacha Kvitko’s special charm is in reminding us of the romance, the exoticism of this coast, the escape it offered so many generations from the humdrum routines of Russian life 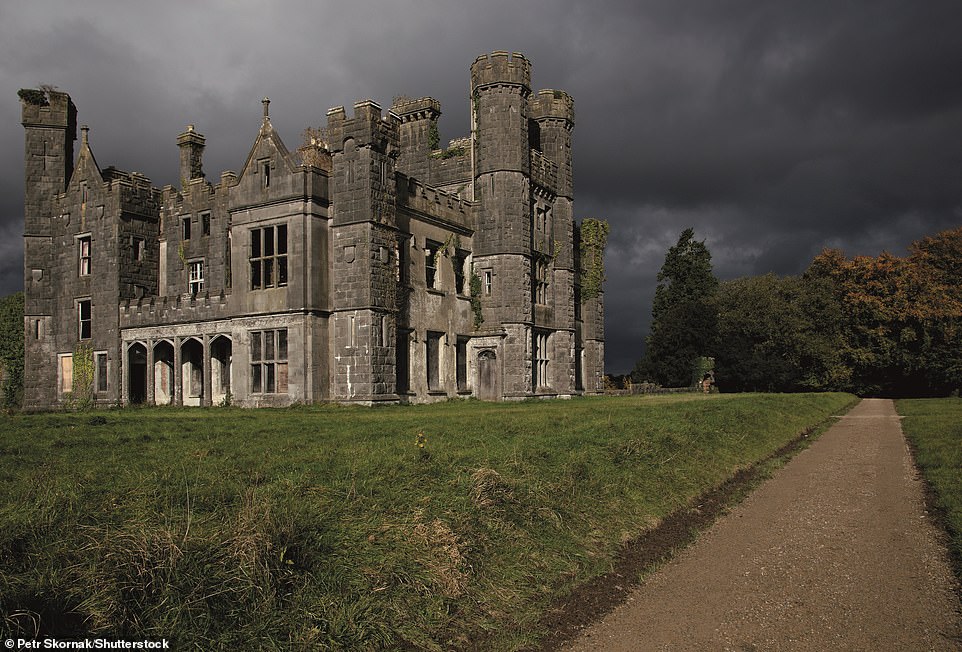 Though the nearest town is in the Irish Republic, the Saunderson estate straddles the border with Northern Ireland. Castle Saunderson itself, in fact, stands in County Fermanagh – fittingly enough for the family seat of the Saundersons, historically stalwarts of the Ulster Unionist cause. Built in 1840, Castle Saunderson was sold in the 1970s. Though it was supposed to be refurbished, a succession of fires left it gutted, but an international boy scouts centre has been established in its grounds 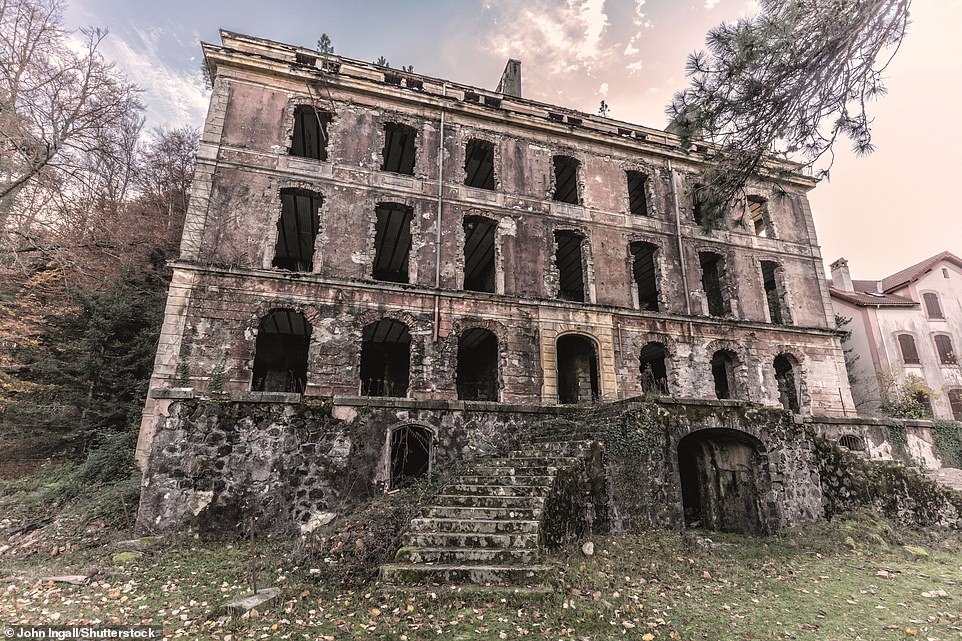 The construction of a railway tunnel through an outcrop in the shadow of Monte d’Oro here at Vizzavona proved so long and arduous a task that accommodation had to be built to house the engineers and labourers. When the job was done, and the workers had packed up and left, the village that had been their dormitory remained, and – with the wooded hills of Vivario all around – it really was a very lovely spot. The perfect place for affluent foreigners to come and get away from it all in the Corsican interior. Hence the construction of this luxury hotel, Grand Hôtel de la Forêt, in 1893. In its heyday, the Grand Hôtel de la Forêt was a favourite destination for wealthy English holidaymakers, who loved to play on Vivario’s first-known tennis courts. Now, of course, these are long overgrown: the tourist trade declined in the postwar years and the hotel was finally shut down in the 1960s 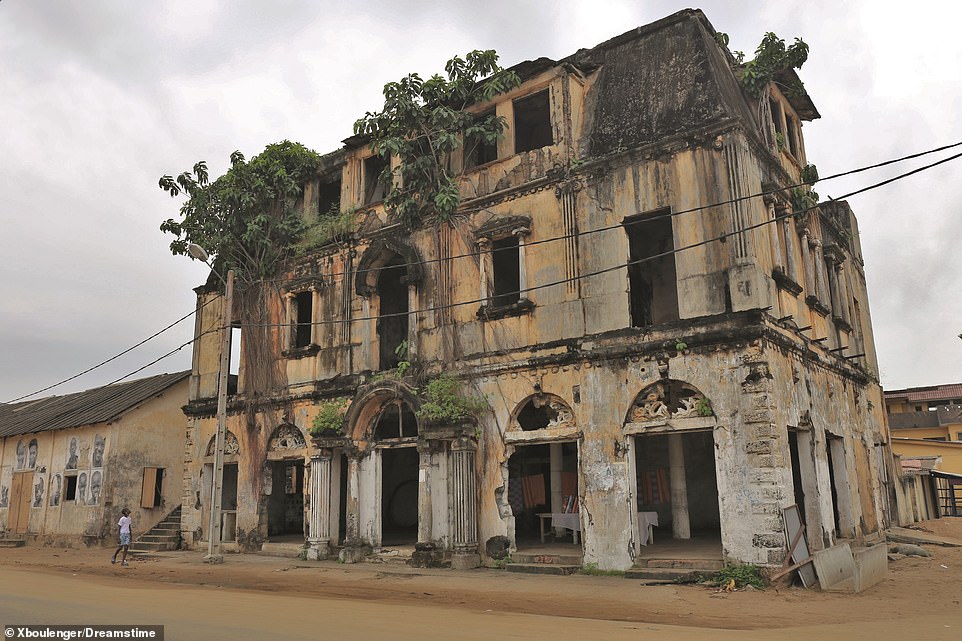 A veritable shrubbery sprouts from among the masonry of what was once clearly a big and handsome building, which now lies open to the elements in Grand Bassam, Côte d’Ivoire. The colonial capital for several decades, Grand-Bassam lost that status to Bingerville (now a suburb of Abidjan) after a yellow fever outbreak in the 1890s. The port city limped on through the 20th century but was soon evidently in inexorable decline, and by the 1960s had been more or less abandoned 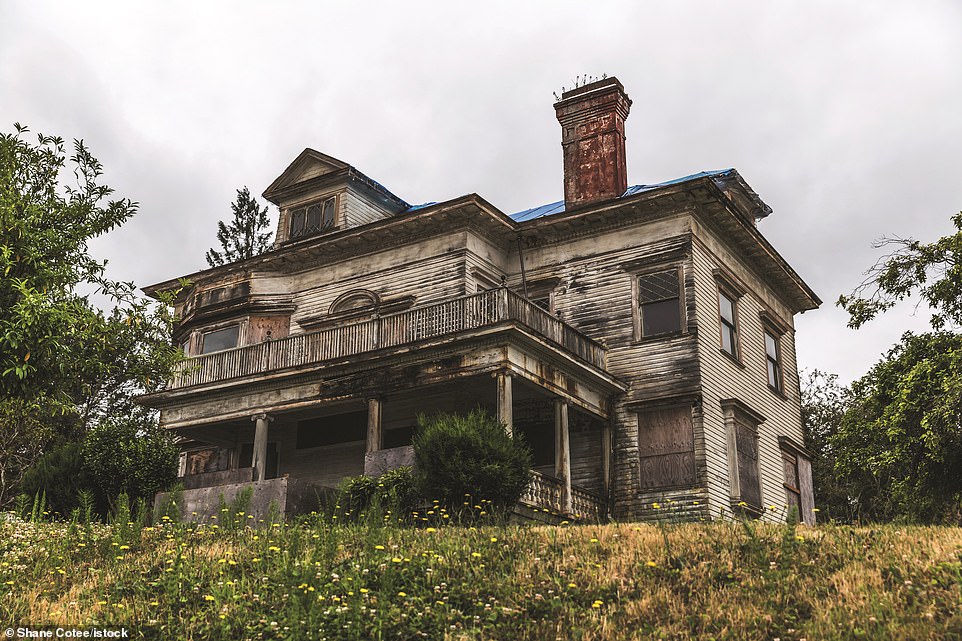 Harry Flavel House proves the archetypal American ‘haunted house’ and it does indeed have a few (figurative) skeletons in its closet. Built in 1901, it was bought by Captain George Conrad Flavel (1855–1923). His grandson Harry lived here with his sister Mary Louise from the 1940s. For the most part, they kept themselves to themselves, while the local community left them alone. They were well advised to do so: on one occasion Harry took a hatchet to a neighbour, while in 1983 he stabbed a motorist in a dispute and was imprisoned 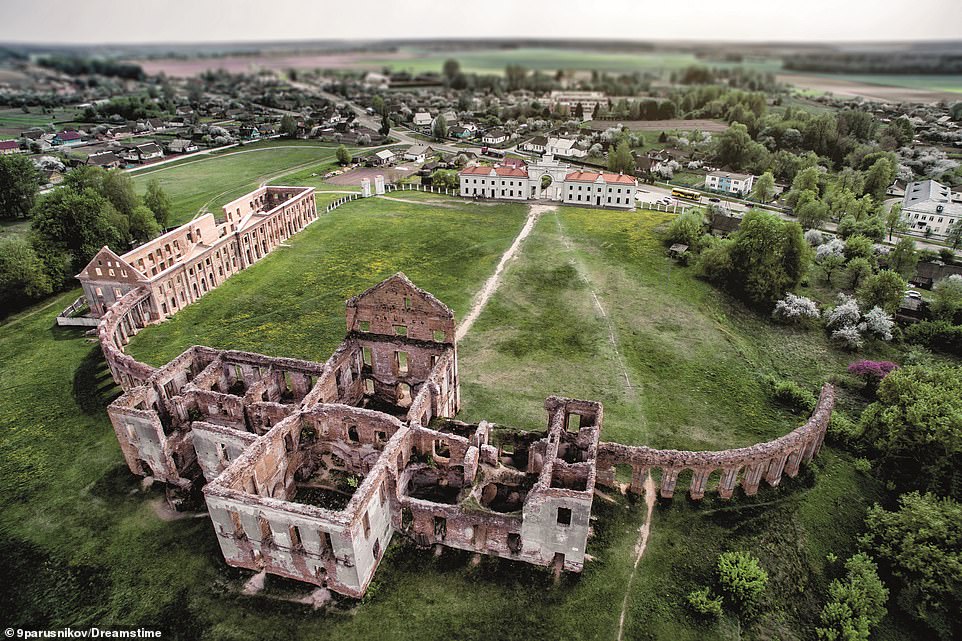 Local magnate Aleksander Michal Sapieha (1730–93) built the neoclassical Ruzhany Palace in the 1780s in the Pruzhany District, at a time when Belarus belonged to the Polish- Lithuanian Commonwealth. Sapieha was not just a nobleman but a significant statesman: the power, perhaps, went a little to his head. An ambitious – even overweening – project, this palace had its own theatre and glassed-in orangery and was surrounded by extensive parkland grounds. The palace burned down in 1914 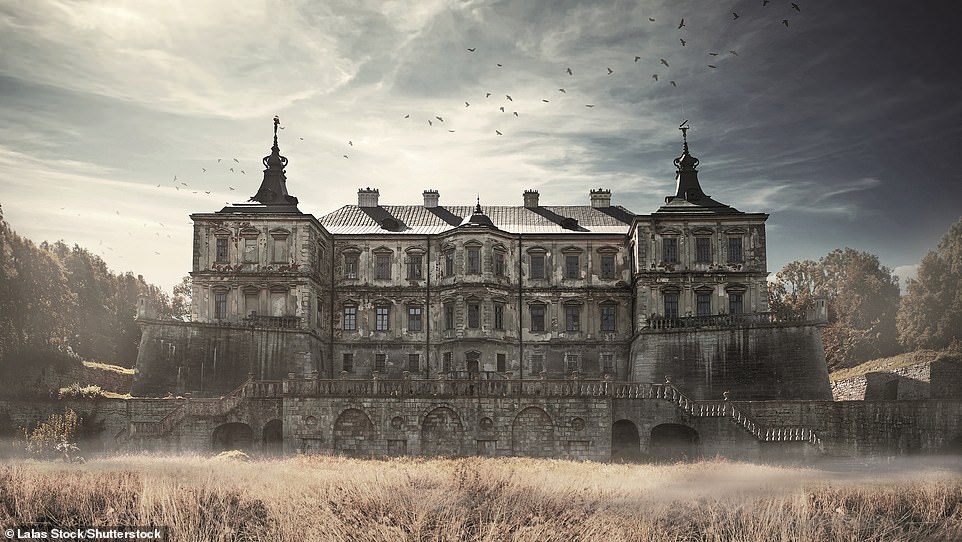 Pidhirtsi Palace in Lviv was built in the 1630s for the famous Polish military commander and royal counsellor Stanislaw Koniecpolski (1591–1646). Looted and damaged in World War I, it survived to be used as a sanatorium but was severely damaged by a fire in the 1950s. Since Ukrainian independence, it has been owned by the national art museum – but they haven’t had the resources to restore it 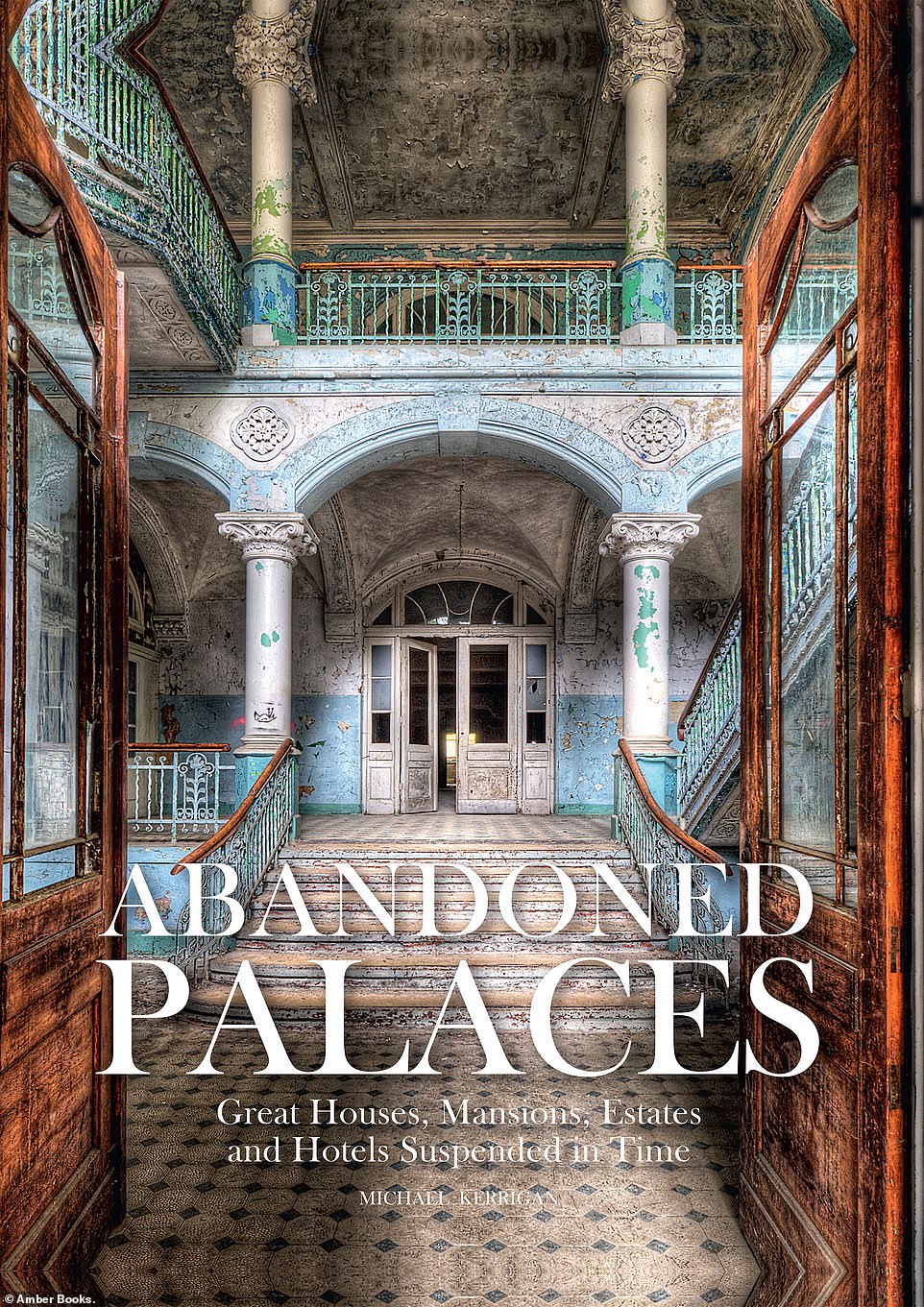 All images taken from the book Abandoned Palaces by Michael Kerrigan (ISBN 978-1-78274-862-5) published by Amber Books Ltd and available from bookshops and online booksellers (RRP £19.99)