Roseanne’s cancellation may have come as a surprise to advertisers who just two weeks ago attended ABC’s upfronts presentation, where executives made jokes about the star’s tweets in their attempt to sell ads for the network’s upcoming season.

Roseanne Barr kicked off the event, introducing Disney-ABC Television Group President Ben Sherwood to the audience of prospective ad buyers as ‘the guy responsible for most of my tweets,’ according to video of the event recorded by ThinkProgress.

When Sherwood came to the stage, he riled the crowd up, asking them to give another round of applause to Barr – a ‘woman who has always done it her way’. 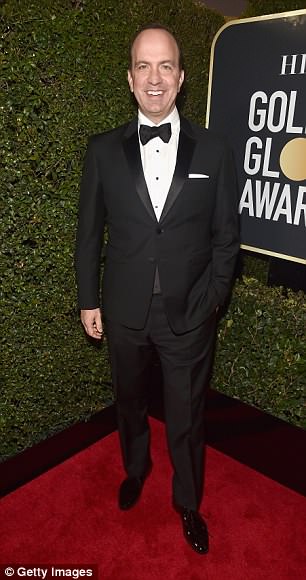 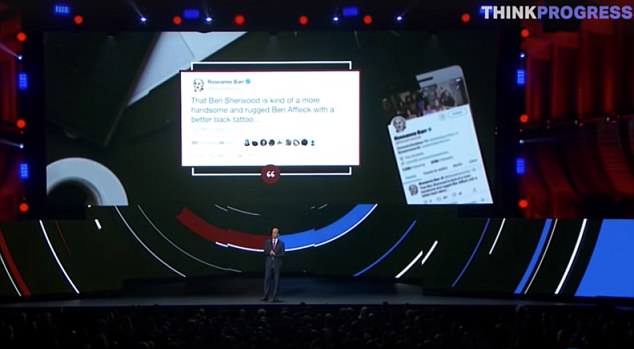 Roseanne introduced Sherwood at the presentation, and when he came out onto the stage, they joked about her tweets, flashing a fake one about how Sherwood looks like a ‘more handsome and rugged Ben Affleck’ on the screen

He then went on to make a joke about Barr’s Twitter addiction.

‘For the record, I have absolutely nothing to do with Roseanne’s Twitter account, I mean take a look at her most recent tweet. It was all her,’ he said.

A fake tweet then flashed up on the screen behind him, which showed Roseanne complimenting Sherwood as being ‘a more handsome and rugged Ben Affleck with a better back tattoo’.

Sherwood then launched into his pitch, in which he boasted about Roseanne being the number one new comedy and overall show on TV.

According to AdWeek, the presentation went on to become a ‘full-blown Roseanne lovefest’.

‘If anyone came to play a drinking game based on how many times we mention Roseanne, you’re welcome,’ Sherwood told advertisers at one point.

In a previous interview with the New York Times, Sherwood, when asked about her controversial Twitter account, said: ‘You can’t control Roseanne Barr. Many who have tried have failed.’

On Tuesday, just two weeks after the presentation, Roseanne was booted from the network over a tweet in which she said former President Obama advisor Valerie Jarrett looks like a cross between the ‘muslim brotherhood & Planet of the Apes’.

Within hours, the network cancelled the show with a blistering statement from ABC Entertainment Group President Channing Dungey, calling Barr’s remarks ‘abhorrent, repugnant and inconsistent with our values’.

Sherwood was the executive to write the internal memo to staffers about Barr’s dismissal.

Of the decision to cancel the show, Sherwood wrote that ‘it came down to doing what’s right and upholding our values of inclusion, tolerance, and civility’.

Much has been said and written about yesterday’s decision to cancel the Roseanne show. In the end, it came down to doing what’s right and upholding our values of inclusion, tolerance, and civility.

Not enough, however, has been said about the many men and women who poured their hearts and lives into the show and were just getting started on next season. We’re so sorry they were swept up in all of this and we give thanks for their remarkable talents, wish them well, and hope to find another way to work together down the road.

The last 24 hours have also been a powerful reminder of the importance of words in everything we do – online and on the air. And the responsibility of using social media – and all of our programs and platforms – with careful thought, decency and consideration.

With the show’s cancellation, the network now may have a problem locking down advertisers for their upcoming season, since there’s a new hole in their schedule.

It also could cause a financial hit to the network, which generated about $22.8million in advertising revenue from the show this season, and was looking to double that for the second season due to its high ratings.

Barr herself appears to be having trouble processing her swift firing from the network.

The actress returned to Twitter overnight and started lashing out at her co-stars for ‘throwing her under the bus’.

Michael Fishman, who played D.J. Conner on the show and started working with Barr when he was just six, was the first to feel the wrath of the show’s creator after he released a statement criticizing her racist tweet. 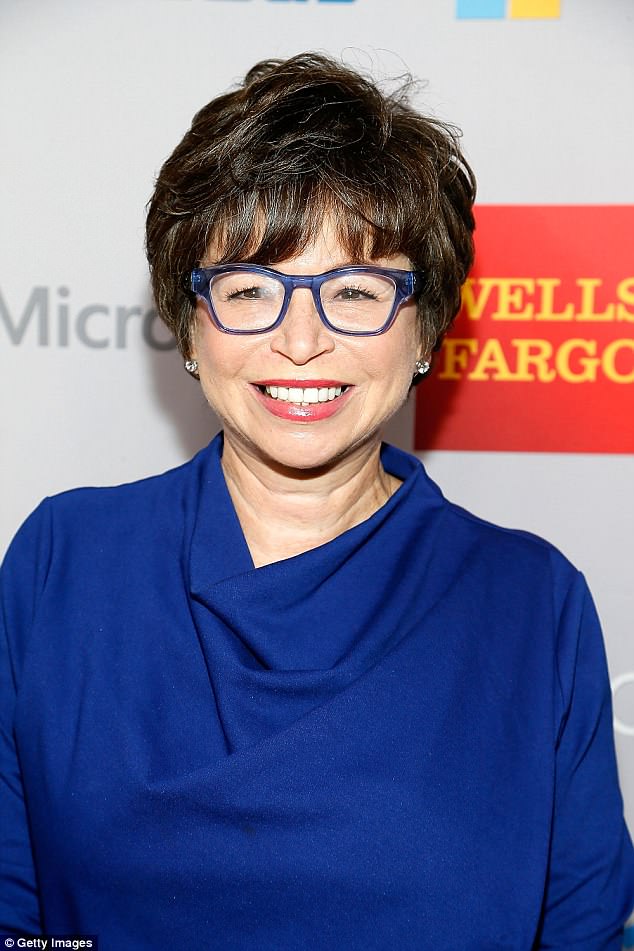