Abi Titmuss: Where is she now?

During the noughties it was near-impossible to turn a page in a newspaper or flick on the television screens without being greeted with the face of Abi Titmuss.

The former nurse, 44, from Newark-on-Trent, first started dominating headlines when she became the girlfriend of TV presenter John Leslie, 55, who she met in a bar in Fulham on April 10, 1999.

And Abi, who was once voted the 7th sexiest woman in the world, suffered embarrassment when a sex tape she made with John and an aspiring female model was released to the public.

After going their separate ways around 2004, Abi then went on to work as a roving reporter for Richard and Judy, before appearing in a selection of reality shows – including Hell’s Kitchen, Celebrity Love Island and Come Dine With Me.

But fast forward two decades and Abi is now a wife and mother-of-one, who has carved out a successful acting career in the US.

Abi Titmuss, 44, from Newark-on-Trent, first hit the headlines when she started dating John Leslie (pictured together), having met in a bar in Fulham in April, 1999 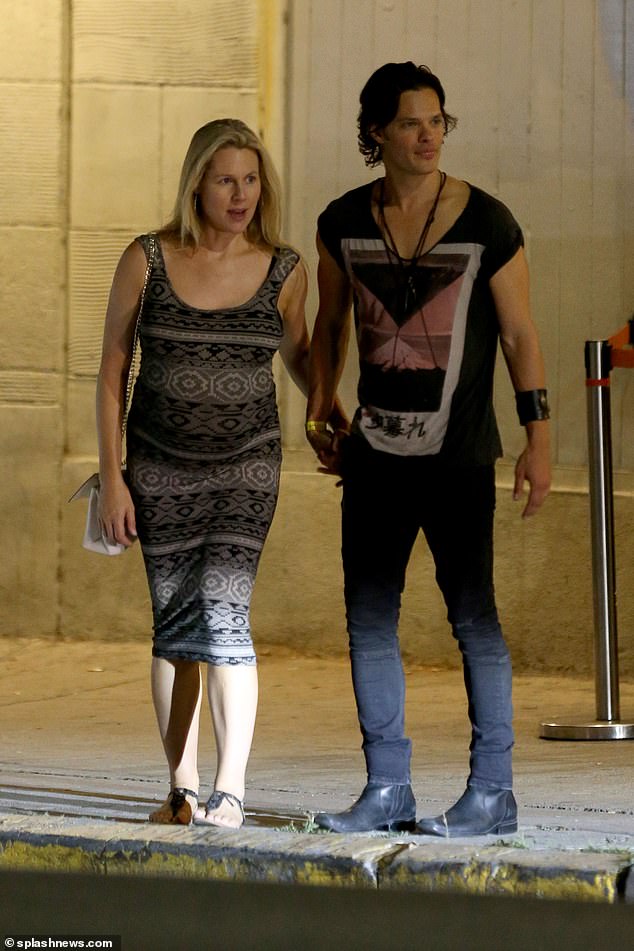 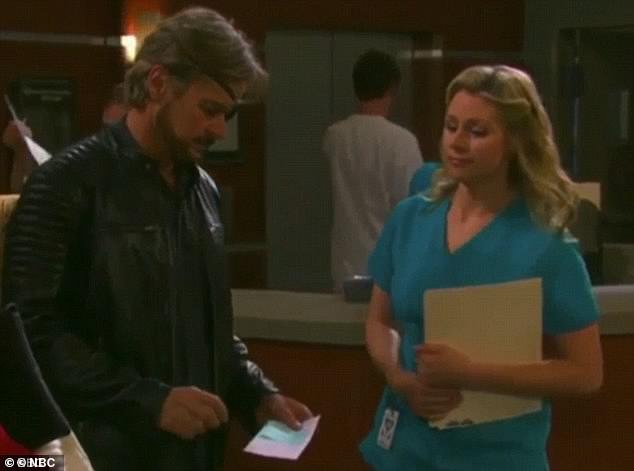 In 2015, Abi landed her biggest role to date in soap opera Days Of Our Lives, where she played Nurse Jackie (pictured)

It comes as John Leslie wept today after he was cleared of groping a woman at a party in 2008.

The former Blue Peter presenter was accused of grabbing a woman’s breasts at a celebrity Christmas party but said the incident never happened.

The 55-year-old walked free from Southwark Crown Court today after a jury of nine men and three women found him not guilty of sexual assault following just 23 minutes deliberation.

Abi was his girlfriend when he was charged with sexually assaulting another woman in 2003, and was still working as a nurse although she had trained as an actor and dreamed of working in film.

When the case against Leslie collapsed and she emerged with him from court, her combination of demure looks combined with a plunging neckline turned her into an overnight sensation.

She went on to feature on the front page of various lads’ magazines – including Nuts, Loaded and FHM.

‘I didn’t think I deserved the attention, so the more money I earned, the worse I felt,’ she said, speaking to FEMAIL back in 2012. ‘I could make £30,000 for a shoot but I knew how third-rate I was. I could feel my lack of discernible talent as though I was wearing it.’

Abi has also appeared in film Girls After Dark, where she played the character of Loretta Berman (pictured) 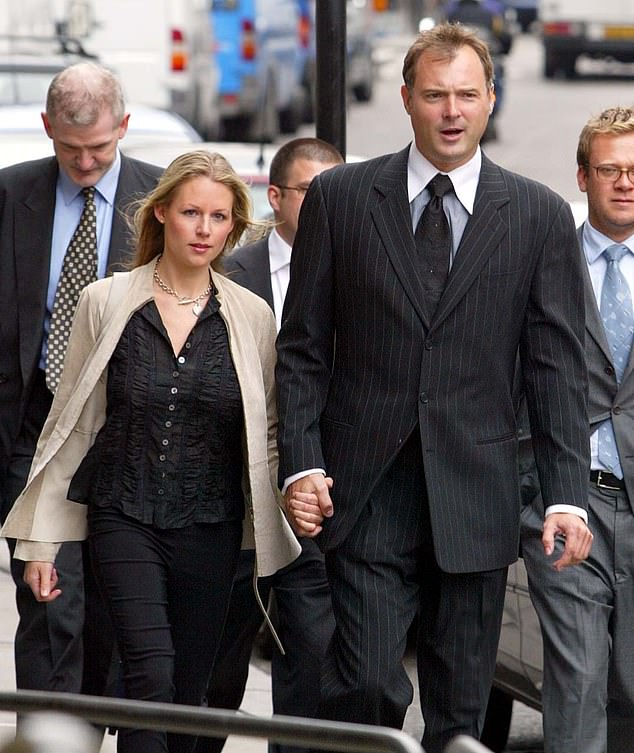 Abi was John Leslie’s girlfriend (pictured, together) when he was charged with sexually assaulting another woman in 2003, and was still working as a nurse although she had trained as an actor and dreamed of working in film 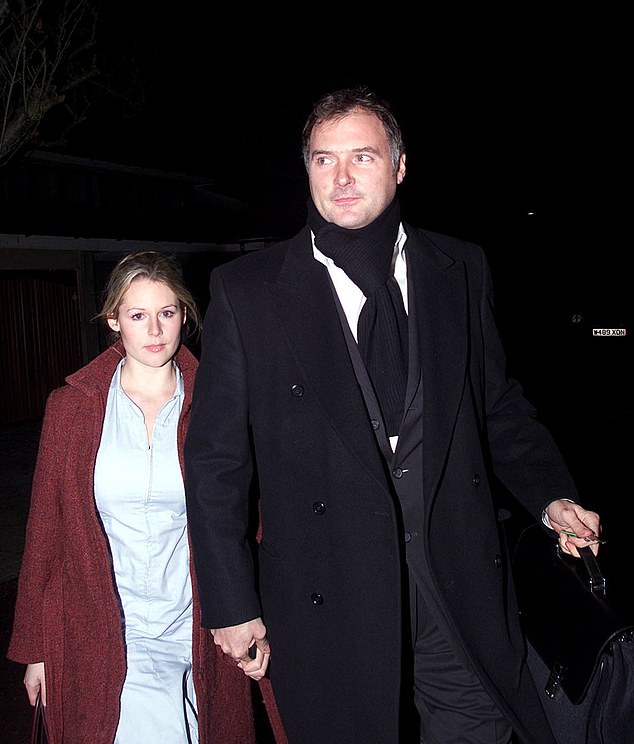 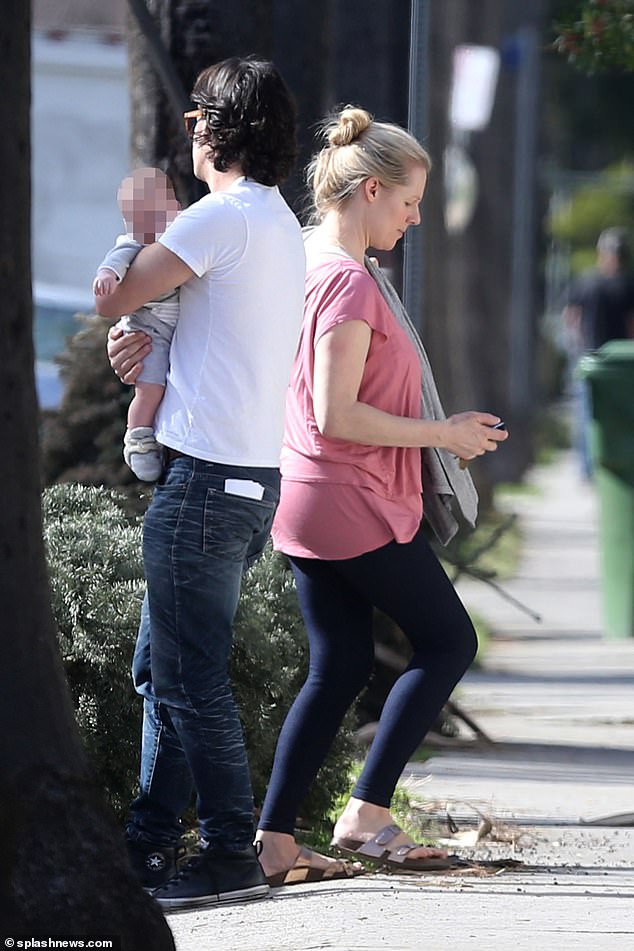 The first pictures of Abi and husband Ari Welkom with their new baby in Los Angeles, California were shared in January 2018 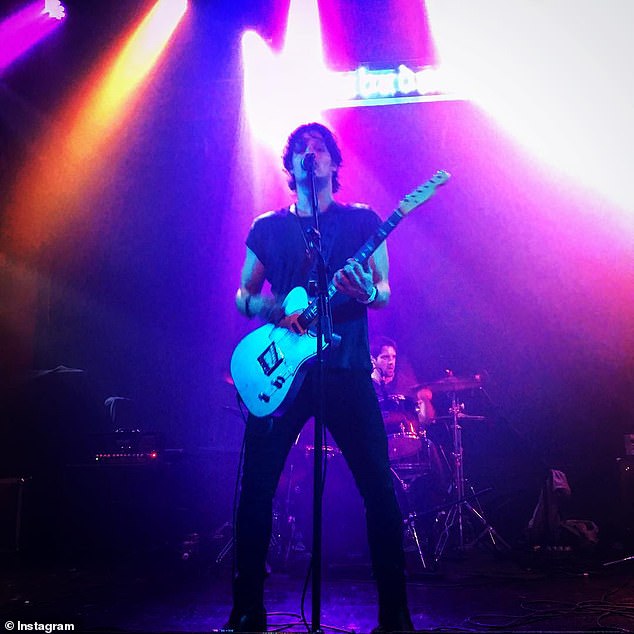 Ari Welkom (pictured), 41, is an American rock star and actor who rose to fame in 2005 due to his appearance in Brick, alongside Joseph-Gordon Levitt

She later told the publication: ‘Suddenly I was being offered a lot of money to do shoots. I thought I could handle it. But I couldn’t.

‘They created this caricature of a person that I didn’t recognise. I was always the same Abigail inside. I studied Latin at school, I’m from a good family. But the image that was created was nonsense.’

And speaking of when the sex tape made with John and an aspiring female model was shared to the public, Abi later told the Daily Star: ‘I was devastated by the violation. It affected me very badly. I guess there was something accessible about me.’

But in the mid-noughties, the former lads’ mag favourite decided to focus on her acting career and attended the Central School of Speech and Drama. 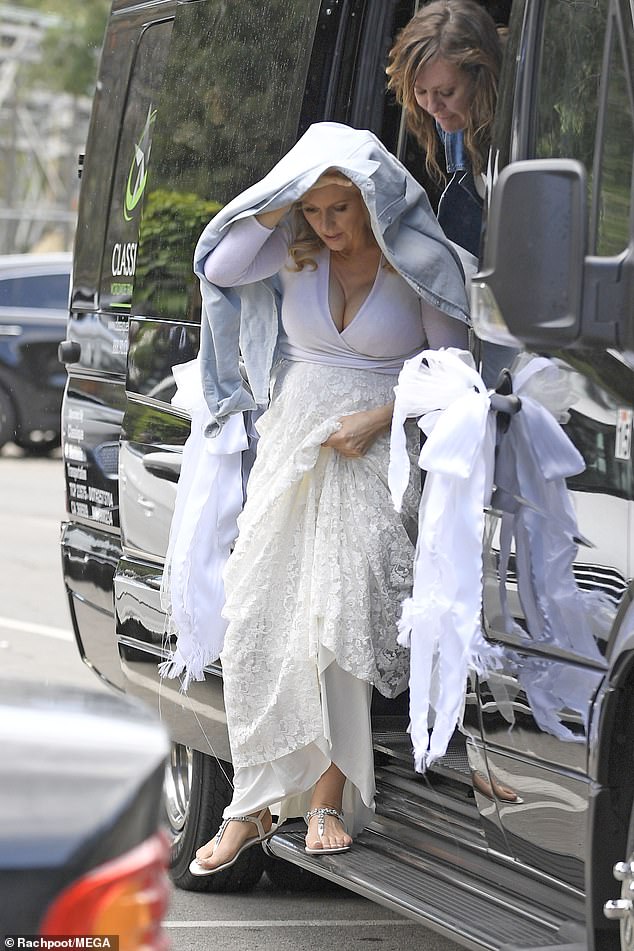 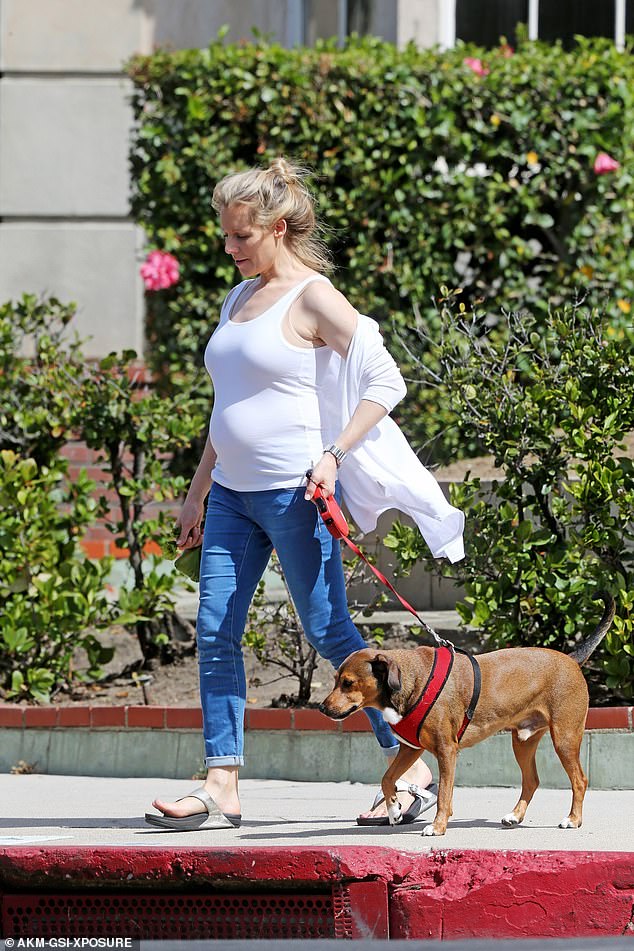 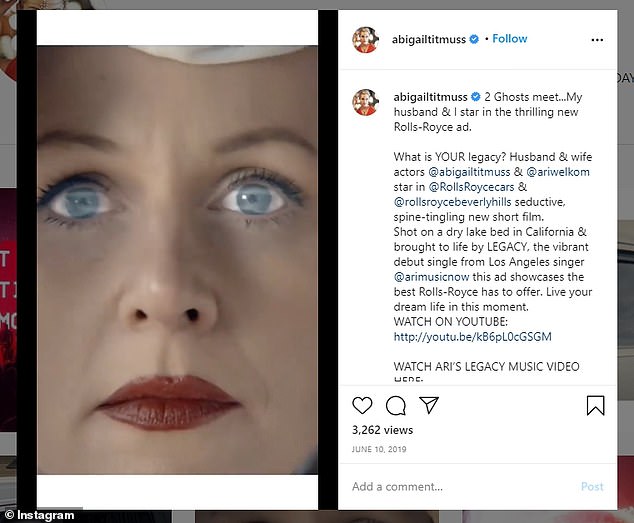 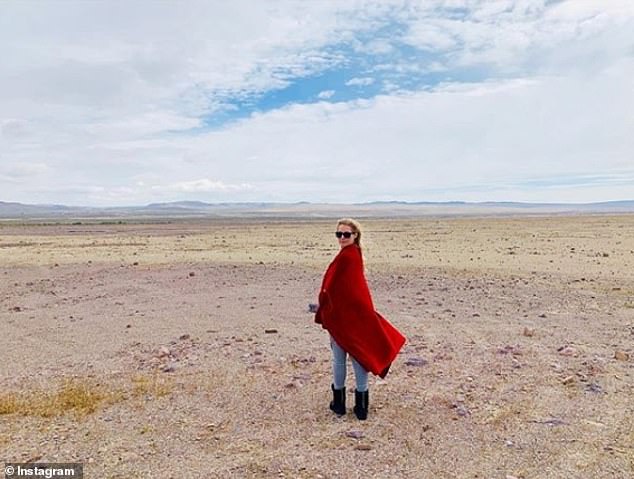 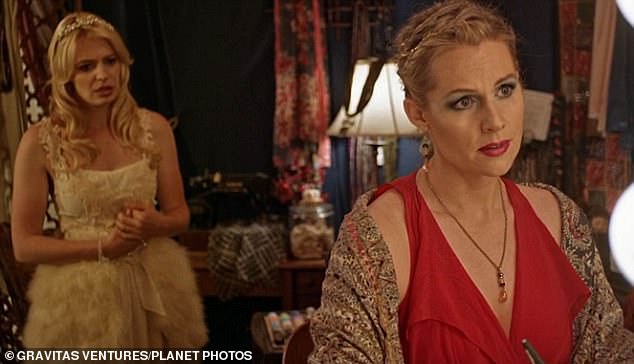 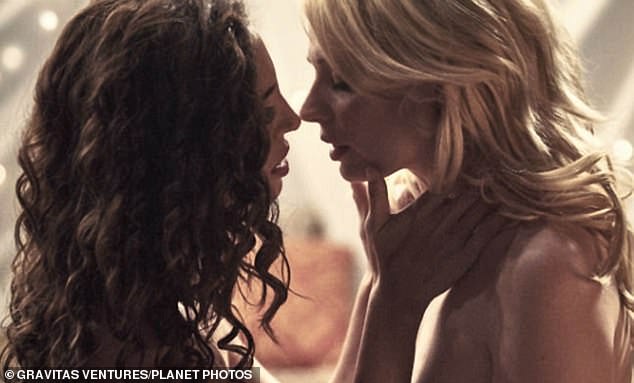 A short stint in theatre beckoned, where Abi bagged a Fringe Report award for Best West End Debut in Two Way Mirror, before going on to play Lady Macbeth in Lowestoft.

After starring in Hotel Babylon and then Casualty in 2012, she fled to the States, changed her name to Abigail Evelyn, and in 2015 landed the role of Nurse Jackie in long running soap opera Days Of Our Lives.

It was there that she met husband Ari Welkom, 41, an American rock star and actor, who rose to stardom in 2005 following his appearance in Brick, alongside Joseph-Gordon Levitt.

She said that what attracted her to Ari, who plays Aldo in the soap, was his lack of judgement about her saucy former career.

‘I wanted to meet somebody who didn’t know anything about me so I would know 100 per cent in my heart this person just liked me for me and didn’t have any judgement.’ 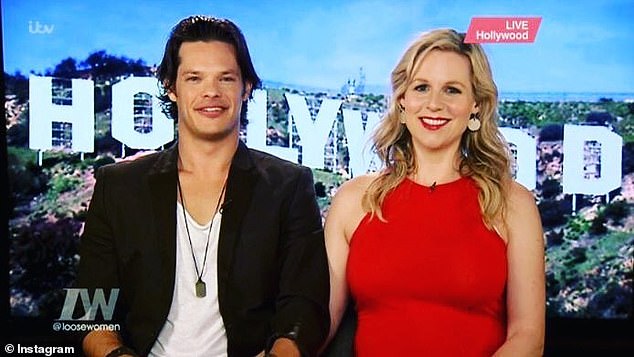 The 44-year-old once said that what attracted her to Ari, who plays Aldo in the soap, was his lack of judgement about her saucy former career (pictured, together) 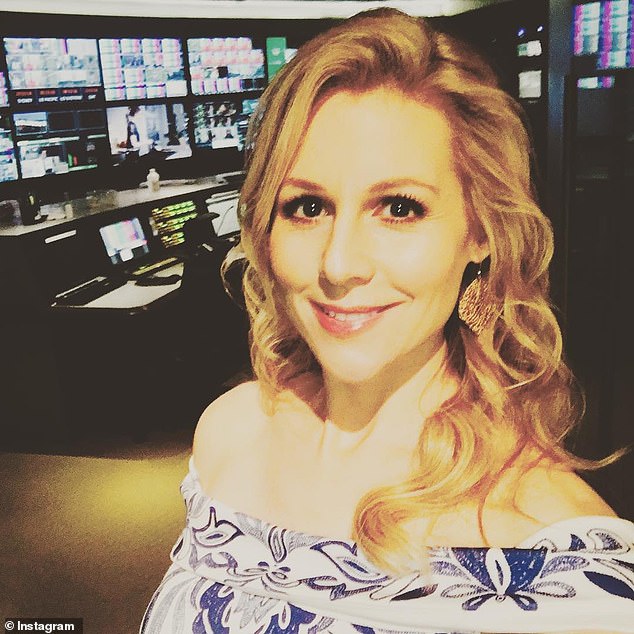 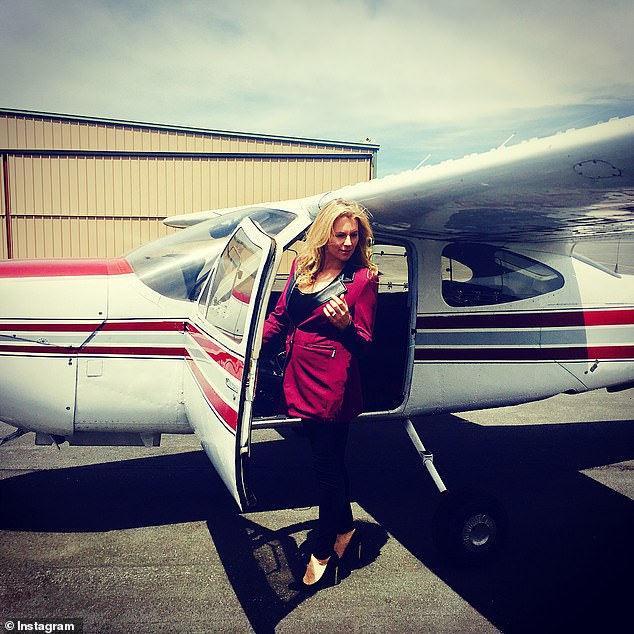 It was around this time Abi admitted that the arc lights of fame drove her into a suicidal depression that took years of therapy and a move to the other side of the Atlantic to break.

Speaking of whether she actually considered killing herself, Abi told Mail Online in 2015: ‘Yes, many times. It took me years of therapy to deal with the depression. It was a traumatic experience. I don’t think it will ever go away.’

Abi and Ari tied the knot in May 2017, and the media learned she was pregnant in January 2018, when the couple were spotted leaving the Bootleg Theater in Los Angeles.

Following their exchange of vows, the blushing bride confessed to Hello! magazine that she was aware of the baby’s presence during their big day. 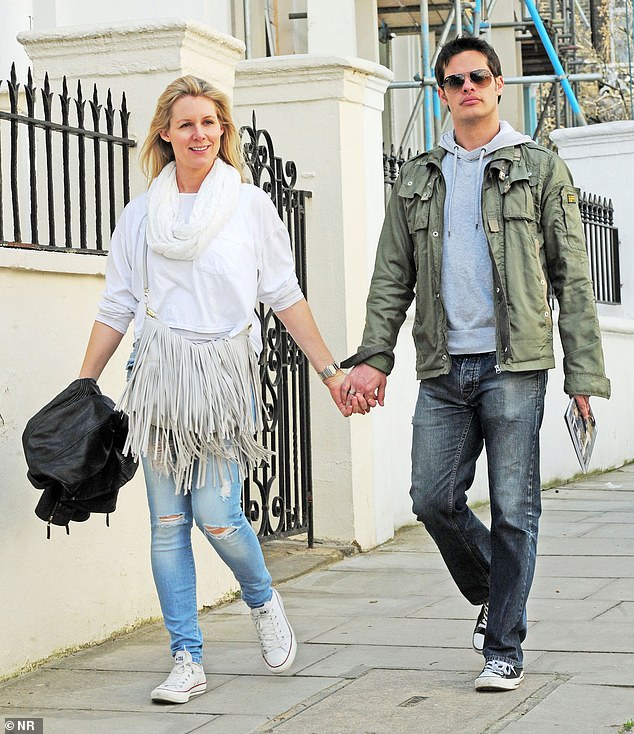 The successful US actress was seen out and about with Ariin Primrose Hill, London in April 2015 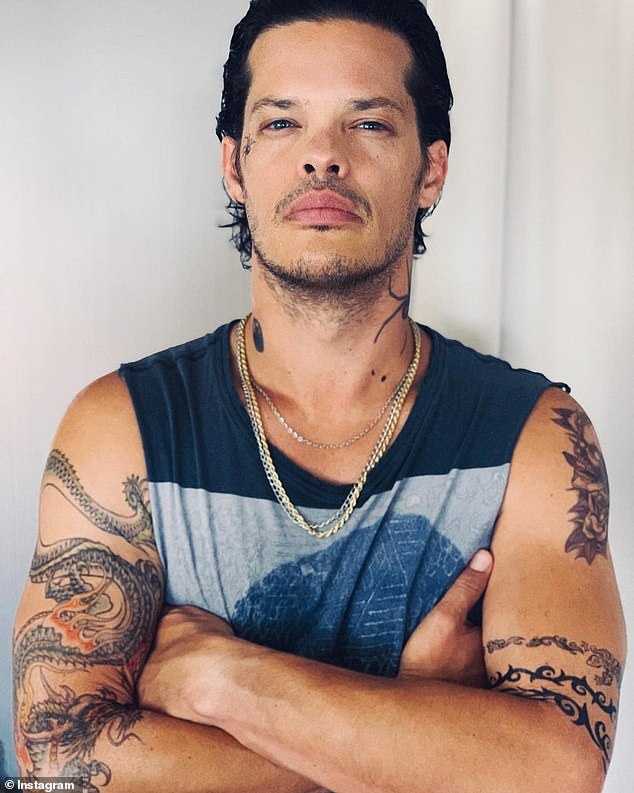 Ari (pictured) rose to stardom in 2005 following his appearance in Brick, alongside Joseph-Gordon Levitt

She told the publication: ‘I was aware throughout our wedding day that there were three, not two, of us experiencing it together.

‘The baby is able to hear now and it was lovely to think he or she could have been listening to us making our vows.

‘When the harpist started to play, I could feel him or her moving around.’

The news came after Abi, who previously enjoyed dalliances with David Walliams, footballer Lee Sharpe and actor Marc Warren, revealed she was ‘ready to be a mum’, in light of her engagement.

‘I’m engaged to the love of my life and I’m ready to be a mum,’ she said in an interview with The Sunday Mirror.

Abi went on to say: ‘Having children has always been really important to me.’

She has also appeared in film Girls After Dark, where she played the character of Loretta Berman – a mysterious character whose path intertwines with a Silicon Valley Private eye, Clyde Cooper. He is hired to try and hunt down a missing woman, who has mysteriously vanished.