Abraham Lincoln’s Christmas letter allowing his wife’s Confederate cousins to return to their cotton plantation taken over during Civil War, sells for $60,000

A letter from Abraham Lincoln written during the Civil War sold for $60,000 last week to an unnamed buyer in the Northwest.

The note from 1863 was recently purchased by The Raab Collection but Nathan Raab confirmed they exchanged the historic document for tens of thousands of dollars after an individual showed interest.

In the handwritten communication, the 16th President of the United States showed mercy to former slave-owning couple on death’s door who wished to return to the Arkansas land they’d been turfed off just before Christmas.

Lincoln signed the Emancipation Proclamation in September 1962, declaring all slaves free as of January 1 the following year.

But the Craig family, who were cousins of his wife Mary Todd, turned to the leader for permission to go back to their plantation before their lives ended.

Lincoln met with then signed the paper a few days before the holiday saying he wished them to reoccupy the place without interference from Union forces. 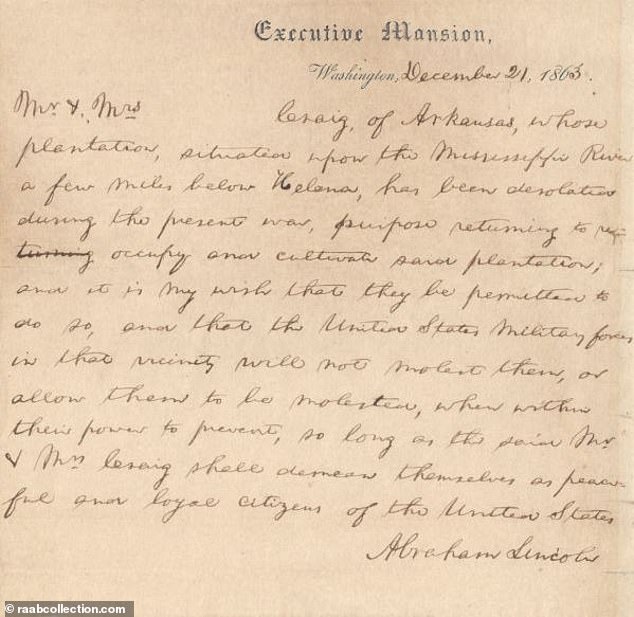 The 1863 letter from US President Abraham Lincoln sold for $60,000 to an individual in the Northwest US

‘Mr. and Mrs. Craig, of Arkansas, whose plantation, situated upon the Mississippi River a few miles below Helena, has been desolated during the present war, propose returning to reoccupy and cultivate said plantation,’ Lincoln penned.

‘(And) it is my wish that they be permitted to do so, and that the United States military forces in that vicinity will not molest them or allow them to be molested, as long as the said Mr. and Mrs. Craig shall demean themselves as peaceful, loyal citizens of the United States.’ 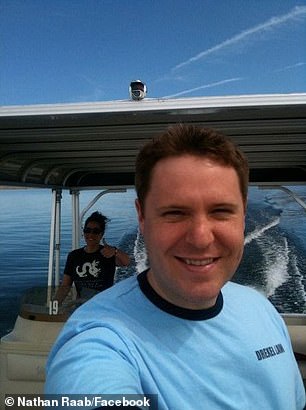 As per the agreement they went back to the cotton plantation without any slaves.

Charley Craig died shortly after they were issued the unique protection order and his wife Susan passed away two years later in Little Rock.

Mrs Craig was also the first cousin of his benefactor and law partner John Todd Stewart.

Stewart brought her along to an event where she gained the sympathy of her other cousin, Lincoln’s wife, and managed to secure a meeting with President Lincoln.

Lincoln ordered the eviction of the ‘carpetbaggers’ – one believed to be a minister – who started living there and made sure the couple wasn’t harassed by pro-Confederate neighbors.

There have been no other instances found where Lincoln acted in a similar way to protect citizens returning to the South.

Raab praised Lincoln for showing mercy more than 150 years ago, according to a CNN report.

‘It’s uncommon to find something where a figure of such great prominence and historical importance is connecting so personally on such a national level,’ Raab said. ‘You get a rare behind-the-scenes look and insight into how the war affected Lincoln himself.

‘(He) issues this remarkable order in what can only be described as a kind gesture toward his family, but which is symbolic of some of the broader things that he was doing in the nation to try and heal a country, which was being torn apart at the seams.’