Abu Dhabi has unveiled plans for a three-in-one religious complex with a church, a mosque and a synagogue on one site.

Designs for the Abrahamic Family House show the three houses of worship facing each other in sprawling gardens on Saadiyat Island in the UAE capital.

Organisers hope the site will become a ‘beacon of mutual understanding and peace’ in a region often troubled by religious conflict.

It is hoped that the complex will be completed by 2022 and host daily religious services as well as international summits.

Eye-catching: An inter-faith group in Abu Dhabi wants to build this complex featuring a mosque (left), church (centre) and synagogue (right) to promote peace between religions 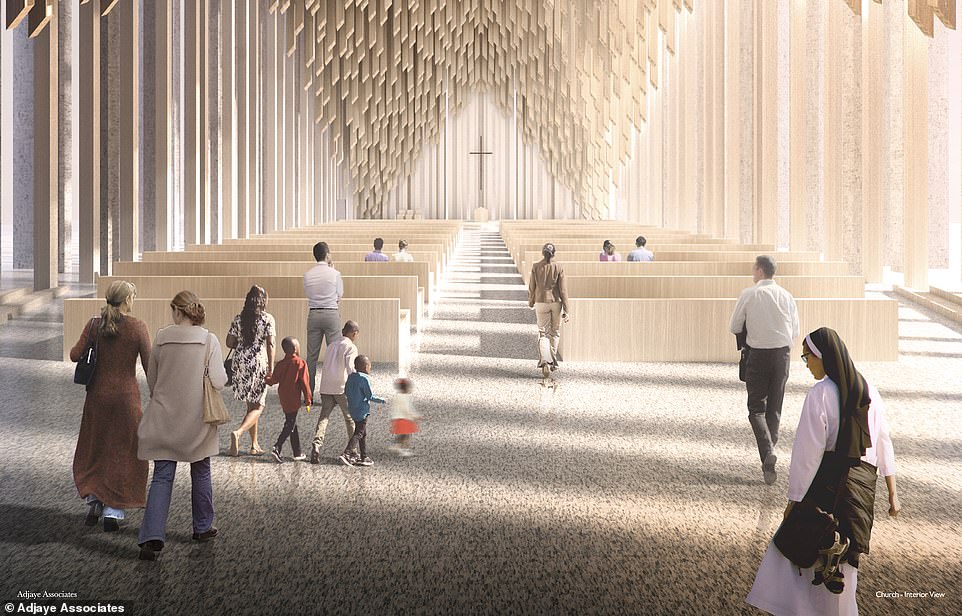 Inside the church: An artist’s impression of what the Christian place of worship might look like. The UAE has a substantial Catholic population because of its large migrant workforce

The project was inspired by the Pope’s historic visit earlier this year when Francis and a leading Sunni Muslim cleric signed a joint statement on ‘human fraternity’.

The pontiff’s visit in February was the first ever papal trip to the Arabian Peninsula.

An inter-faith group called the Higher Committee of Human Fraternity was formed after the visit and has championed the building project.

‘This landmark will be a place for learning, dialogue and worship, open to all,’ a brochure for the group says.

‘Within each of the houses of worship, visitors will have the opportunity to observe religious services, listen to holy scripture and experience sacred rituals.

‘A fourth space – not affiliated with any specific religion – will be an educational center where all people can come together as a single community devoted to mutual understanding and peace.’ 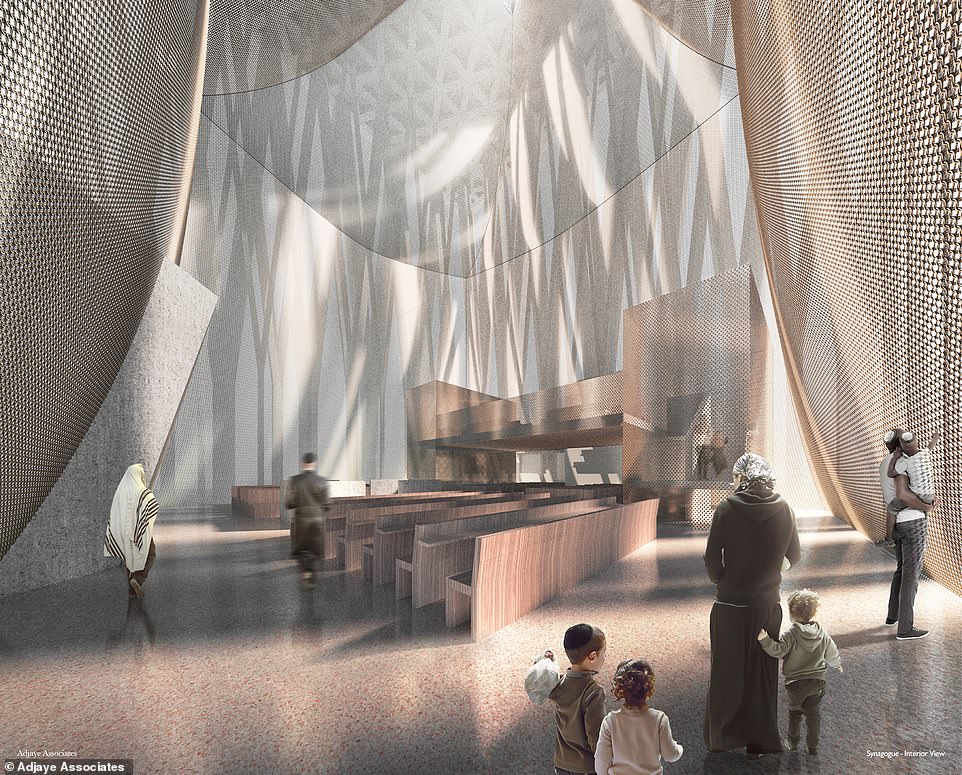 This view shows what the synagogue would look like, with worshippers shown wearing Jewish kippahs. It would be only the second synagogue in the United Arab Emirates, with the other in Dubai 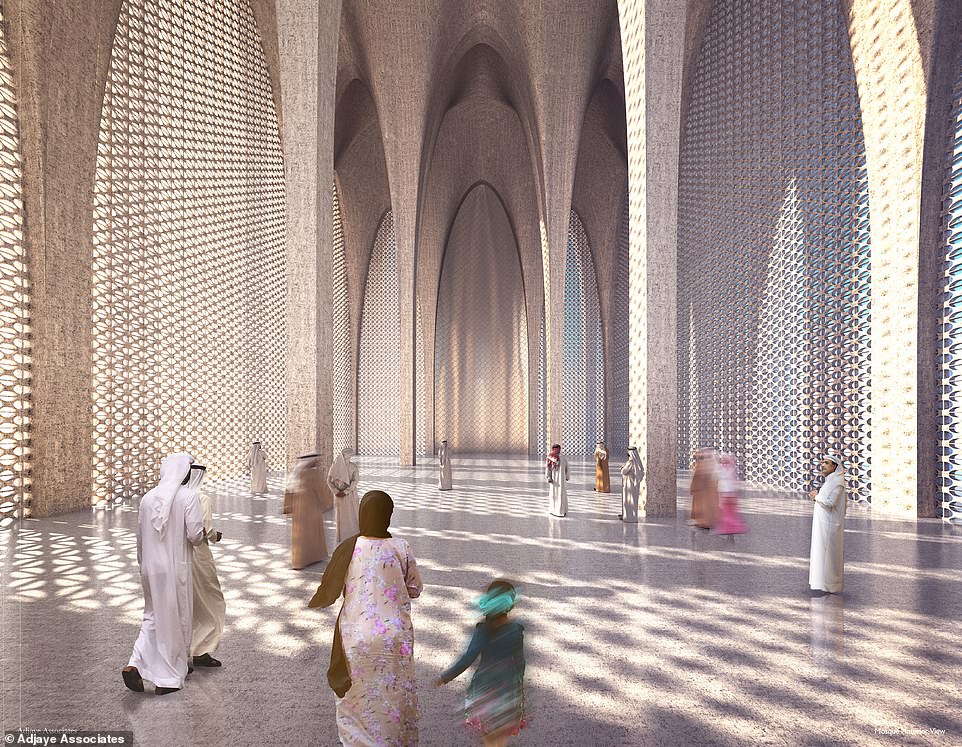 The inside of the mosque, featuring high vaulted ceilings. The project was inspired by the Pope’s historic visit to the Arabian Peninsula earlier this year during which he visited the UAE 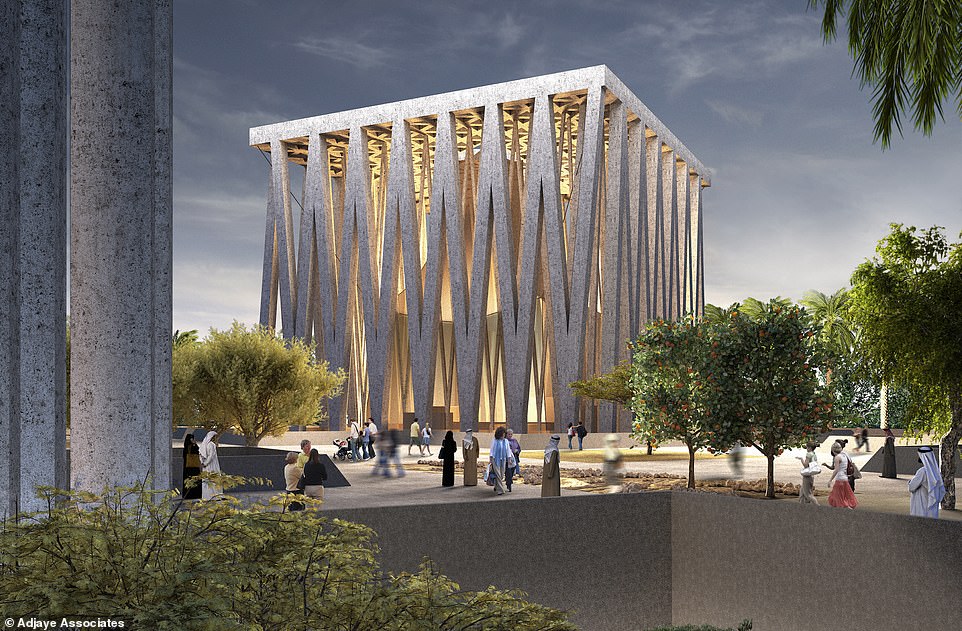 The outside of the synagogue, which will be built in sprawling gardens on Saadiyat Island in the UAE capital

On his visit earlier this year Francis led an open-air Mass for 170,000 people in Abu Dhabi where Christian worship is usually allowed only inside churches.

Unlike Saudi Arabia, which outlaws all non-Muslim places of worship, Abu Dhabi allows Christians to practise their faith discreetly and has a substantial Catholic population.

The UAE also has one existing synagogue, opened in Dubai in 2008.

However, the UAE has also been at the centre of Middle East tensions in recent months.

The UAE backs Saudi Arabia in the war in Yemen but relations have soured amid fighting between their surrogate armies in recent weeks.

Earlier this year a series of Gulf oil tankers were attacked off the UAE coast, sending tensions escalating alarmingly. 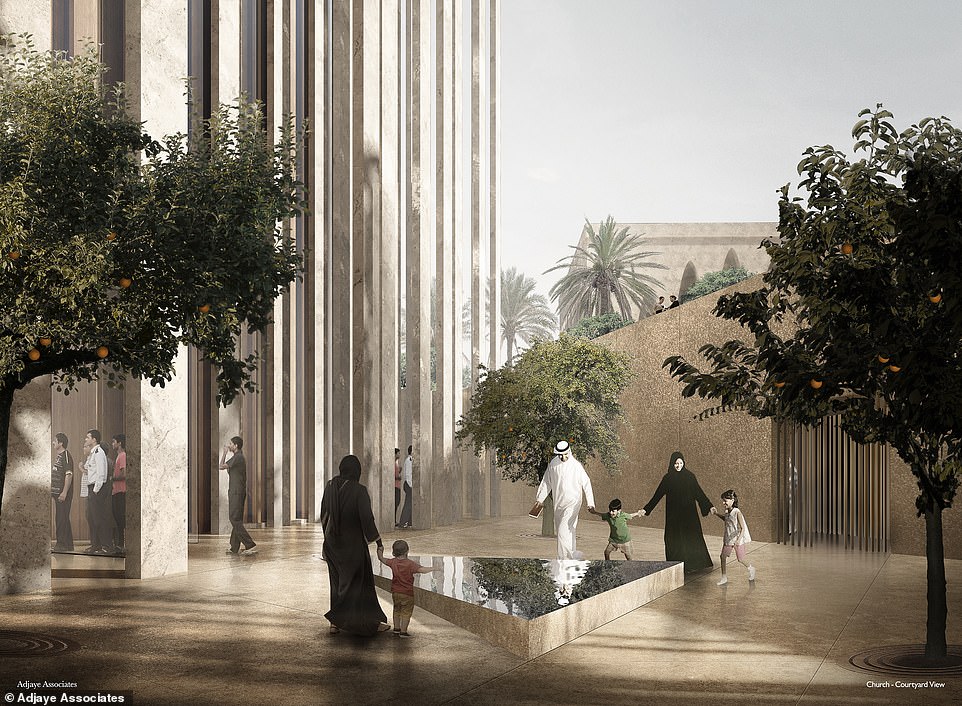 An artist’s impression of worshippers walking around a courtyard in the inter-faith complex, next to the church 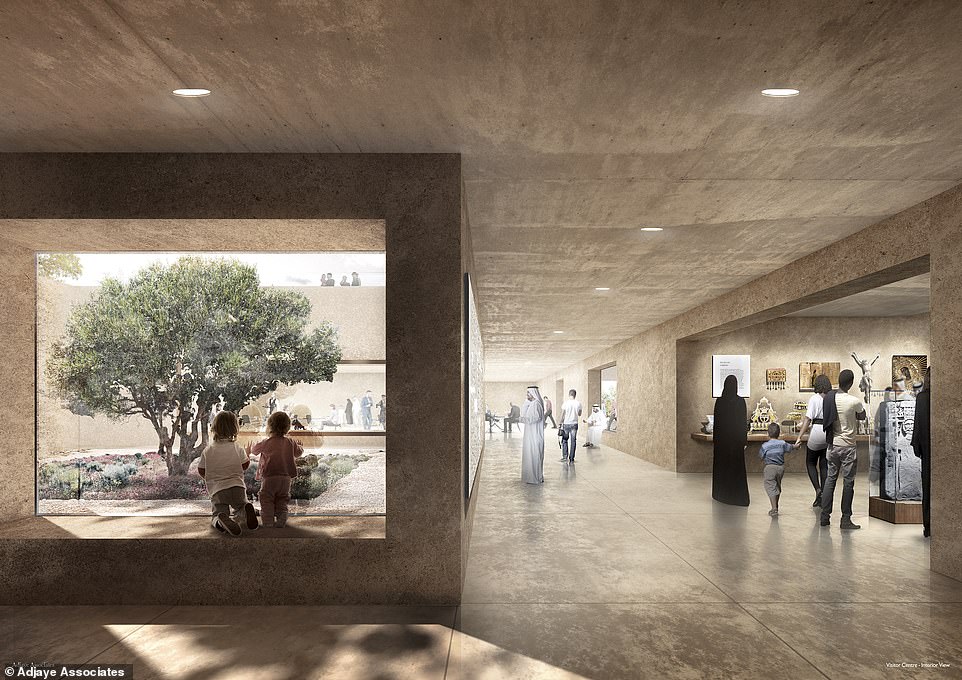 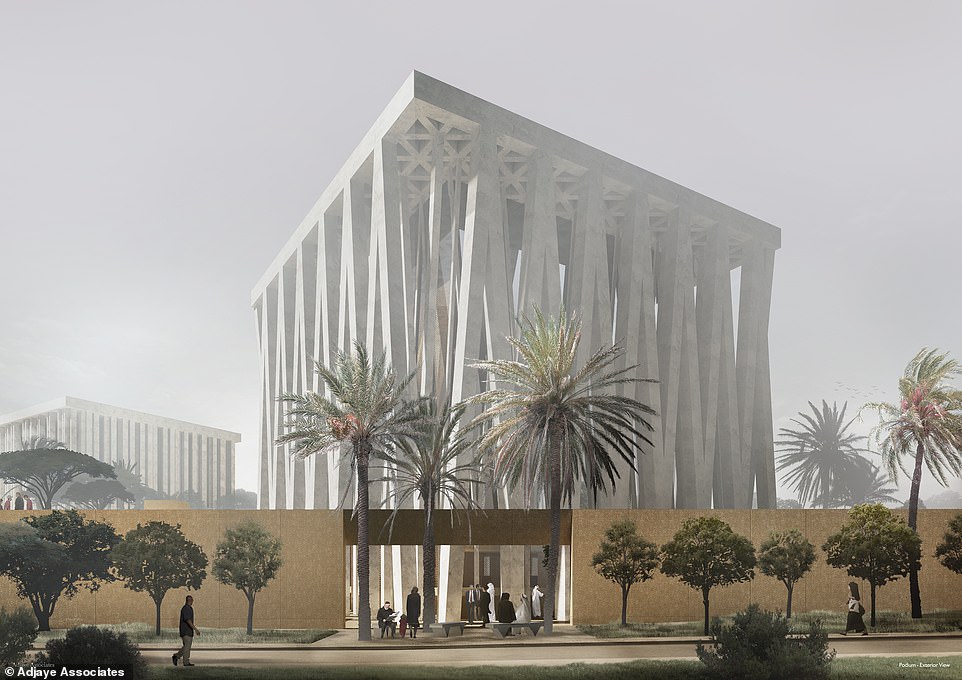 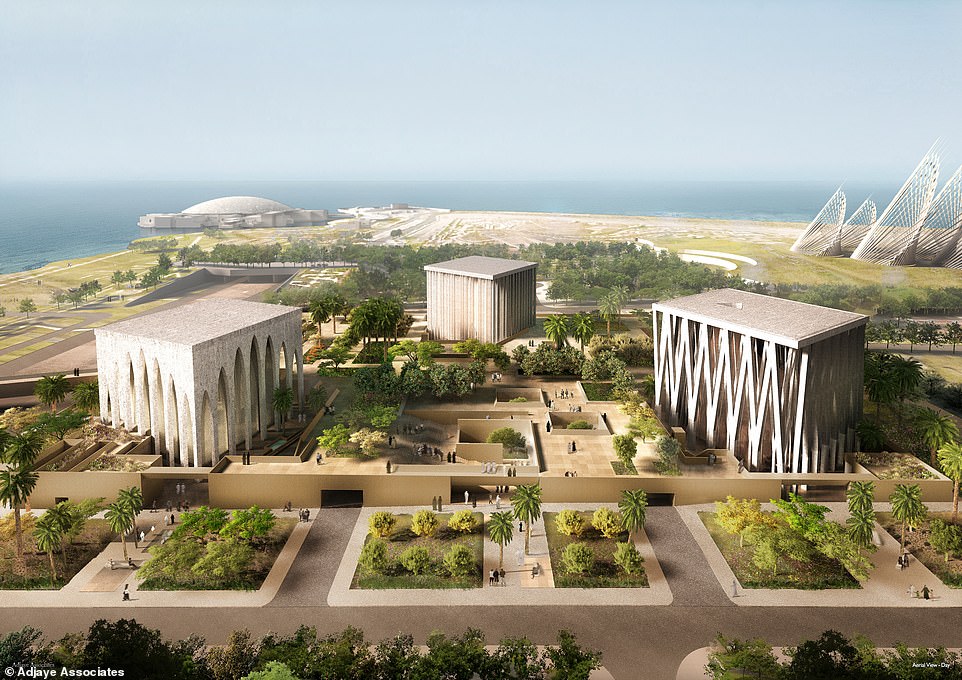 A UAE-led investigation heavily implied that Iran was to blame, a claim which Washington agrees with but Tehran denies.

The inter-faith committee had its inaugural meeting in New York earlier this month.

The winning design for the Abrahamic Family House was by London-based architects Adjaye Associates.

The three religions are sometimes called the Abrahamic religions because Abraham is regarded as a significant figure in all of them.

Architect David Adjaye said: ‘I am humbled and honoured that our design has been selected.

‘I believe architecture should work to enshrine the kind of world we want to live in, a world of tolerance, openness, and constant advancement.

‘Built in the UAE’s capital, the space will be open to the world, and our hope is that through these buildings people of all faiths and from across society can learn and engage in a mission of peaceful coexistence for generations to come.’