ARCADIA, Calif. (AP) – Accelerate outdueled West Coast to win the $300,000 Awesome Again Stakes by 2 1/4 lengths at Santa Anita on Saturday in his fourth Grade 1 victory of the year.

Ridden by Joel Rosario, Accelerate already had a guaranteed berth in the $6 million Breeders’ Cup Classic as a result of his win in the Pacific Classic in August. The 5-year-old’s fifth victory in six races this year merely solidified his status as the best older horse in the country.

West Coast was coming off a six-month layoff for trainer Bob Baffert. He hadn’t raced since finishing second in the Dubai World Cup. The 4-year-old colt was the 8-5 second choice in a six-horse field in which all the other runners were listed at double-digit odds.

West Coast returned $2.10 and $2.10, while Isotherm was another half-length back in third and paid $6 to show.

Game Winner pulled away in the stretch to win the $300,000 American Pharoah by 4 1/2 lengths and earn an automatic berth in the BC Juvenile.

Gunmetal Gray returned $2.80 and $2.10, while Rowayton was another length back in third and paid $2.10 to show. Both are trained by Jerry Hollendorfer.

Ridden for the first time by Rosario, Game Winner improved to 3-0 in his young career. The colt was coming off a victory in the Del Mar Futurity on Sept. 3, when he beat Rowayton by 1 1/2 lengths and heavily favored stablemate Roadster by 2 lengths.

Roadster has been regarded as Baffert’s top 2-year-old. However, Game Winner is quickly making a name for himself. He won his career debut by 5 3/4 lengths Aug. 18 at Del Mar and came back 16 days later to score the Futurity upset.

“This horse tipped us off this summer that he was going to be a good one,” Baffert said. “I don’t plan to do too much with him before Breeders’ Cup.”

Game Winner dueled outside Rowayton before taking a short lead into the stretch. He then inched away under urging by Rosario past the eighth pole and pulled away from Gunmetal Gray.

It was Baffert’s eighth career victory in the race previously known as the Norfolk and the FrontRunner Stakes, and renamed this year for his 2015 Triple Crown winner.

“Pretty cool and nice of Santa Anita to name a race after him,” Baffert said.

The BC Juvenile will be run Nov. 2 at Churchill Downs.

In other Breeders’ Cup preps:

Winner of three in a row, Bellafina earned a berth in the BC Juvenile Fillies on Nov. 2.

Trained and co-owned by Hollendorfer, Vasilika was claimed for $40,000 by her new owners in February and has won eight of nine since, including seven in a row. 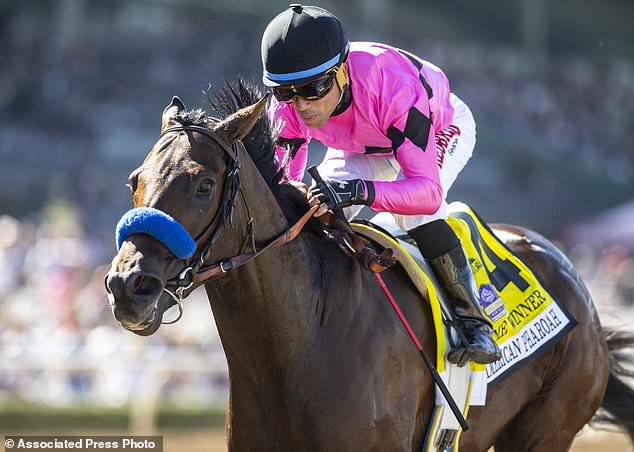