Accused terrorist, 25, ‘ taking orders from a supernatural being’

Accused terrorist, 25, ‘who stabbed a passer-by in a random knife attack was taking orders from a supernatural being’

A Sydney pharmacy student who repeatedly stabbed a passer-by in an alleged terror attack said a supernatural being instructed him to kill someone, a jury has been told.

‘In my view, it is reasonable to conclude he was suffering from symptoms consistent with a diagnosis of schizophrenia during the period surrounding the alleged offence,’ forensic psychiatrist Dr Jonathon Adams testified on Tuesday.

He was giving evidence for the defence at the NSW Supreme Court trial of 25-year-old Ihsas Khan, who prosecutor Carolyn Davenport SC says was a ‘a self-radicalised extremist Muslim’ and Islamic State supporter.

The stabbing is not denied, but he has pleaded not guilty – on the ground of mental illness – to committing a terrorist act and to wounding Wayne Greenhalgh with intent to murder him at Minto in September 2016.

Under questioning from defence barrister Troy Anderson, Dr Adams said he interviewed Khan twice and considered material including his psychiatric history and records, his diary and police interview.

In his view, Khan’s religious extremism came about in the context of his mental illness and there were reasonable grounds to conclude he was experiencing a psychotic episode at the time of the stabbing.

Khan told the psychiatrist of having previously ‘felt like the Koran was under my feet’ and of having often seen a jinn, or angel, outside his body telling him how to relate to people.

Noting Khan had completed and passed two multiple-choice university exams two days before the stabbing, Mr Anderson asked if a person was capable of this if he were in the grips of a psychotic episode. 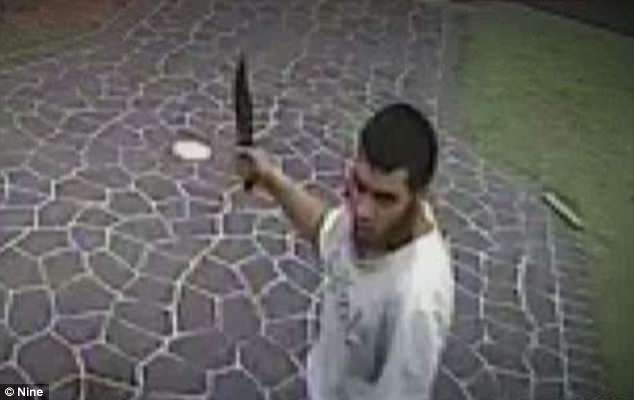 The stabbing is not denied, but Khan has pleaded not guilty – on the ground of mental illness – to committing a terrorist act and to wounding Wayne Greenhalgh with intent to murder him at Minto in September 2016

‘It could be considered unusual but in my view not impossible,’ Dr Adams replied.

Khan told the psychiatrist he had seen Mr Greenhalgh walking past on the morning of the stabbing, before he spent time watching footage of air strikes with children being killed by American forces and gang rapes of Muslim women.

‘He wanted to kill someone who he viewed to be anti-Muslim and die himself, to be a martyr,’ Dr Adams said. 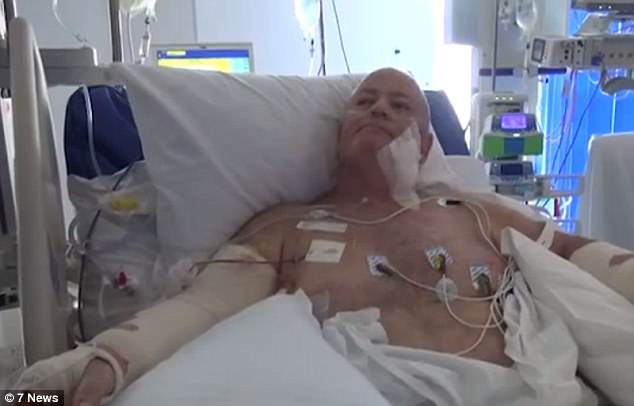 Wayne Greenhalgh (pictured in hospital) was allegedly repeatedly stabbed by Khan in western Sydney in 2016. ‘He wanted to kill someone who he viewed to be anti-Muslim and die himself, to be a martyr,’ a psychiatrist said in court

‘The jinn was instructing him to behave in that alleged behaviour.’

He disagreed with the opinion of a psychiatrist called by the Crown who considered Khan was suffering from obsessive compulsion disorder at the time and this had no connection to the events on September 10.