The American Civil Liberties Union is apologizing after tweeting a controversial photo of a white baby holding an American flag.

On Wednesday afternoon, the group posted the photo of the toddler wearing a ‘Free Speech’ onesie along with the caption: ‘This is the future that ACLU members want’.

The free-speech organization was blasted by social media users who accused the post of being racially insensitive and even likened it to pro-Nazi commentary.

The American Civil Liberties Union was blasted by social media users for its tweet of a photo of a white baby wearing a ‘Free Speech’ onesie along with the caption: ‘This is the future that ACLU members want’ (above) 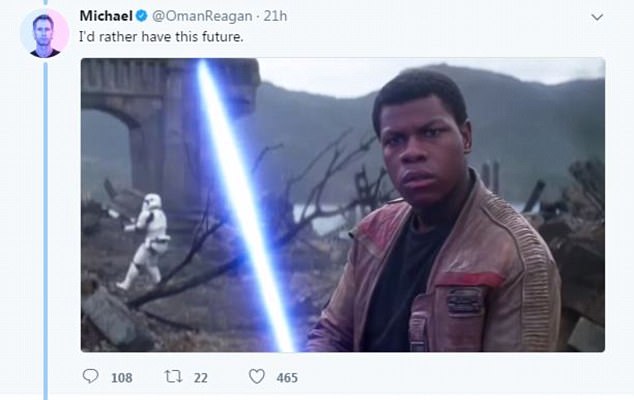 ‘Now I see why you worked so hard for the neo Nazis in Charlottesville,’ one user tweeted.

‘I’d rather have this future,’ another wrote, attaching a photo of Star Wars’ Finn.

However, some users tried to defend the group, saying that the social media response had gotten out of hand.

‘Today I learned that being white makes you a neo-Nazi. Interesting,’ wrote one person.

Another user joked: ‘Ban white people! They’re all “racist” even though by definition I am in fact being “racist”!!!!’

The ACLU tried to quell the controversy by tweeting: ‘When your Twitter followers keep you in check and remind you that white supremacy is everywhere’ along with a GIF of Kermit the Frog saying: ‘That’s a very good point.’

Others defended the organization, saying that the social media response had gotten out of hand (above) 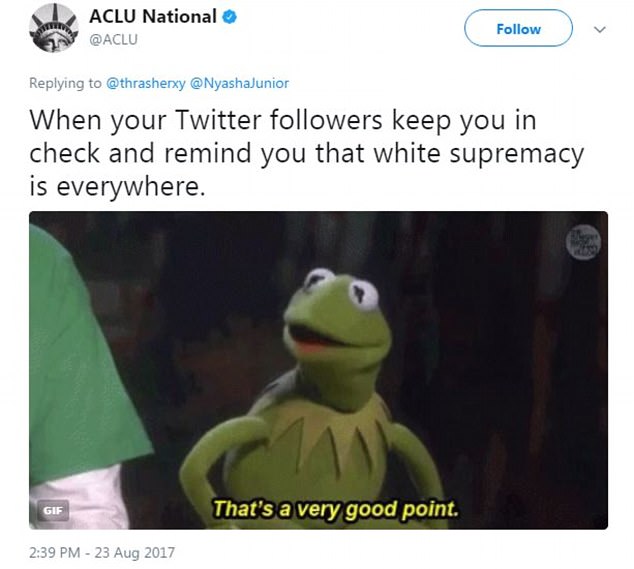 The group tried to clarify that the intention behind its post was not related to white supremacy, but actually an advertisement for a line of clothing.

‘PSA: The future we want is babies in ACLU onesies,’ the organization said. ‘For more cute ACLU babies, follow us on Instagram!’

The ACLU has taken heat in the past for defending any group on the grounds of free speech, including the organizers of the violent alt-right rally in Charlottesville, Virginia, on August 12 that led to the death of one woman and injured 35 others.

Last week, the group announced that it would no longer immediately vindicate groups that bring guns to demonstrations.