A student who found herself in an ‘horrendous spiral of anxiety and suicidal thoughts’ after taking powerful medication to treat her acne revealed how she’s ditched the pills in favour of ‘natural healing’.

Yasmine Roff, 24, from Nottingham, said her acne, which she began suffering with as a teenager, made her feel ‘incredibly embarrassed, anxious and humiliated’.

Yasmine took the contraceptive pill to help manage her breakouts from the age of 15, but her skin flared up when she came off the pill at 21.

She was prescribed a five to six-month course of Roaccutane as a ‘permanent’ cure for the acne, but Yasmine says the medication left her so depressed she was taken to A&E by her mother, who was terrified her daughter would harm herself.

Now Yasmine has ditched medication altogether in favour of tackling her acne through diet, gut health, stress management and gentle exercise – and she’s sharing her ‘holistic’ journey on Instagram to help others going through the same thing.

Student Yasmine Roff, 24, from Nottingham, UK, suffered from acne throughout her teens and was put on the pill at 15 to manage her breakouts 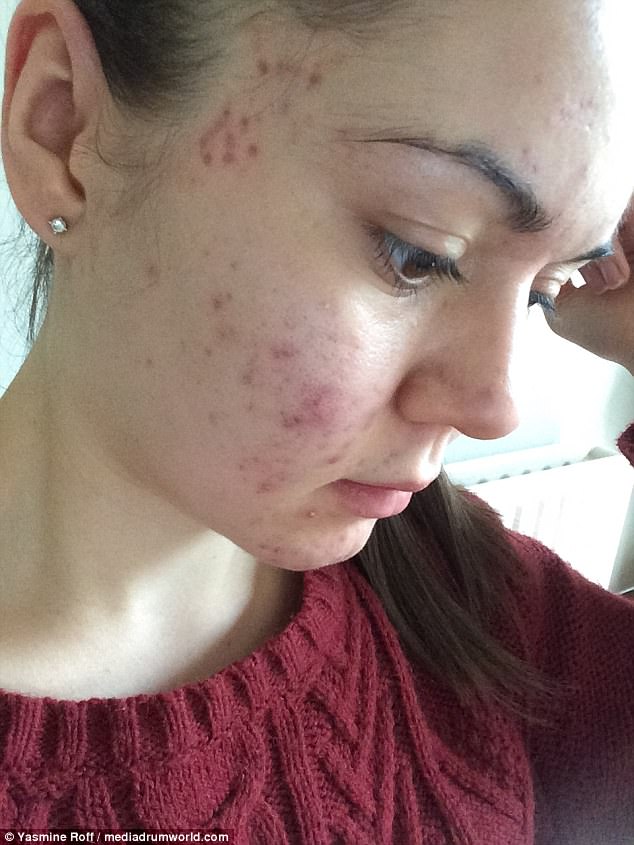 Speaking about her journey, Yasmine revealed: ‘My skin made me feel incredibly embarrassed, anxious and humiliated, as all of my friends had effortlessly clear skin and I was watching mine get worse by the day.

‘I felt isolated as I didn’t want to go out at night or go for dinner, in case this made my acne worse or I was judged by others,’ she said.

‘Friends were kind, but they didn’t understand how emotionally draining it was – some still don’t,’ she added.

Desperate to have clear skin, Yasmine was put on acne medication but soon found the side effects unbearable.

‘I was put on Roaccutane by a dermatologist and was supposed to take it for five to six months for a ‘permanent cure’.

‘After two months, I began to suffer unbearable side effects, including severe joint pain, headaches, unpredictable mood swings, depression, anxiety and incredibly dry eyes – which I read online can be permanent,’ she said. 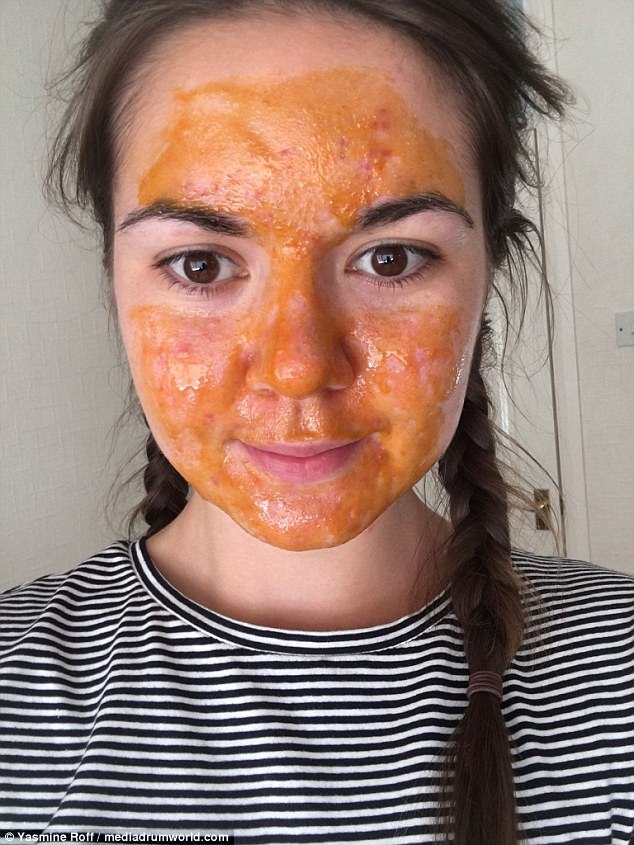 Now Yasmine is proving that acne is nothing to be ashamed of and she is sharing her natural healing journey on Instagram to help others, and show that mental and physical health are more important

Struggling to cope, she took the decision to come off her medicine, with her dermatologist advising that the side effects would be gone within a month.

But two months later, Yasmine had noticed no improvement and was experiencing suicidal thoughts which led to her being admitted to A&E.

‘This sent me into a horrendous spiral of anxiety and suicidal thoughts, as every waking moment was consumed by self-blame for harming myself permanently.

‘I came off roaccutane and my dermatologist said all side effects would be gone in 28 days – this was wrong.

‘After a couple of months of no improvements I was suicidal and ended up in A&E, as my mum feared I was a risk to myself – I was hysterical 24/7 and frankly – it was terrifying,’ she admitted.

‘Luckily, about twelve months later, my eyes returned to normal, but my acne came back.’ 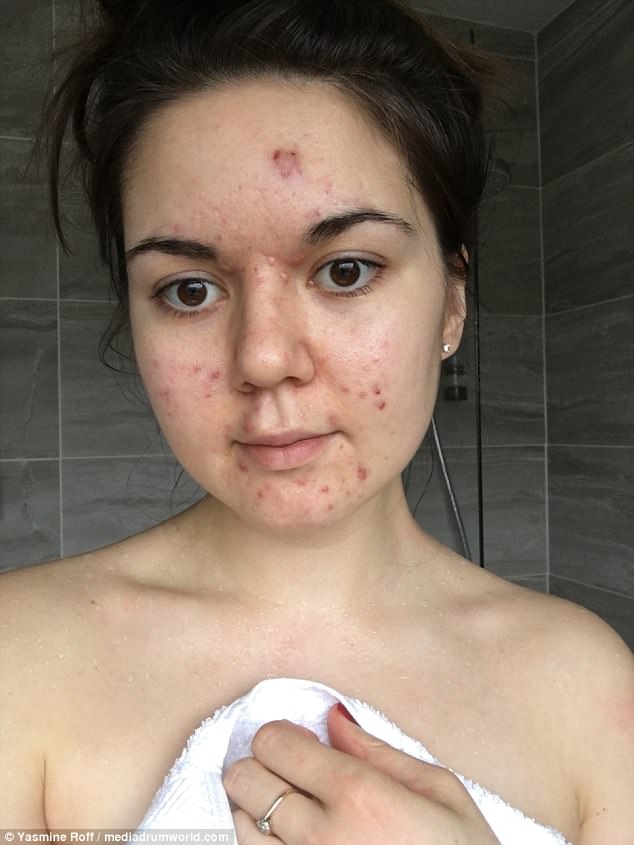 At 21 she decided to stop taking the contraception and within the space of a few months her acne got worse, before being prescribed a medication which resulted in severe anxiety (seen this year) 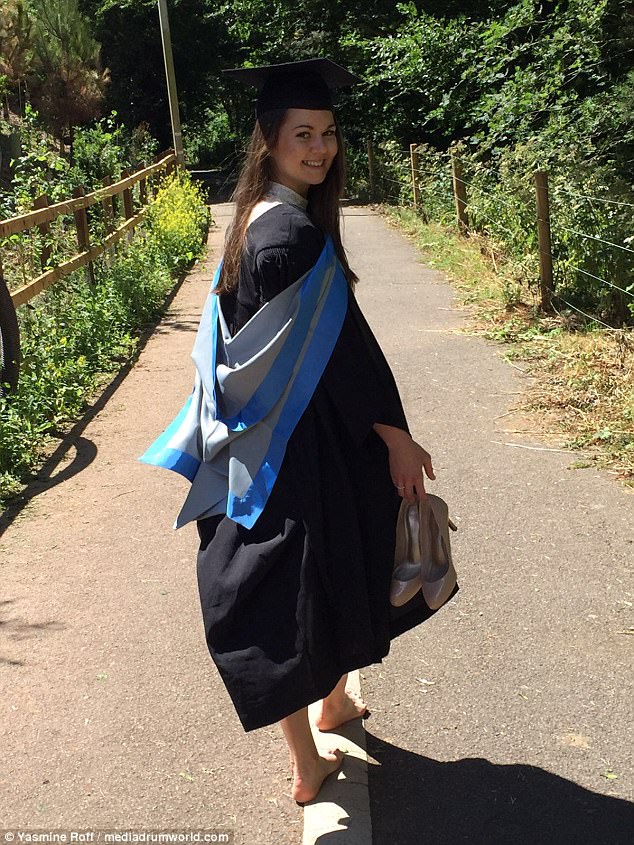 In 2016, aged 22, and desperate for her confidence back, Yasmine was put on Roaccutane  and started suffering from debilitating side effects which included mood swings, anxiety and depression, and painful dry eyes 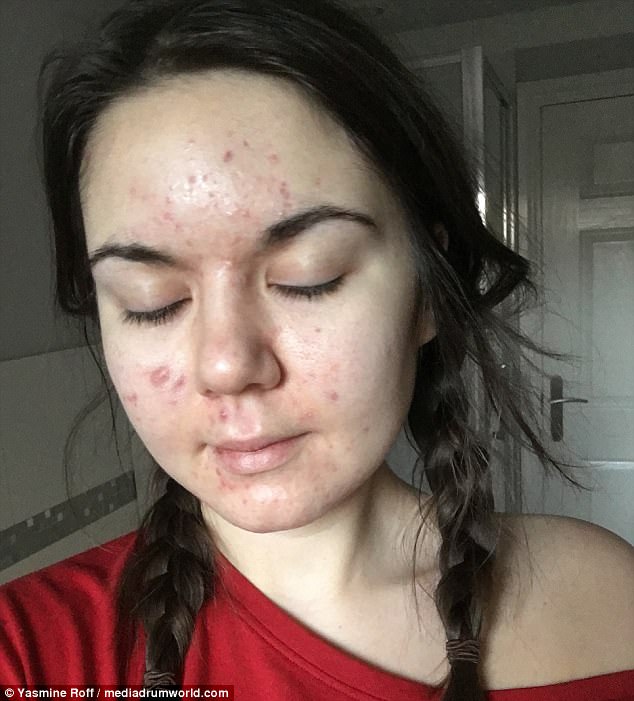 Struggling to cope, she took the decision to come off her medicine, with her dermatologist advising that the side effects would be gone within a month

Yasmine is now on a mission to heal her acne naturally by following a simple skincare routine and eating a low carb and sugar diet which is high in healthy fats.

‘Now, I’ve realised that my health – both mental and physical – is so much more important than my acne,’ she said, explaining that she decided to document her journey on Instagram.

‘I saw other acne Instagram pages and decided to start my own for two reasons. First, to help others realise that they aren’t alone and that acne isn’t something to be embarrassed about, and secondly to track my progress and get tips on healing.

‘I now feel much better about myself, though I have difficult days. I hate to admit this but often, how I feel is determined by my skin. Flare ups mean tears and frustration; calm days mean positivity and laughter.

‘I’m trying to stop being so hard on myself when I have set backs and care less about what others will think, though when my acne is bad I find it hard to make eye contact with others. and spend much of my time in public looking at the ground. 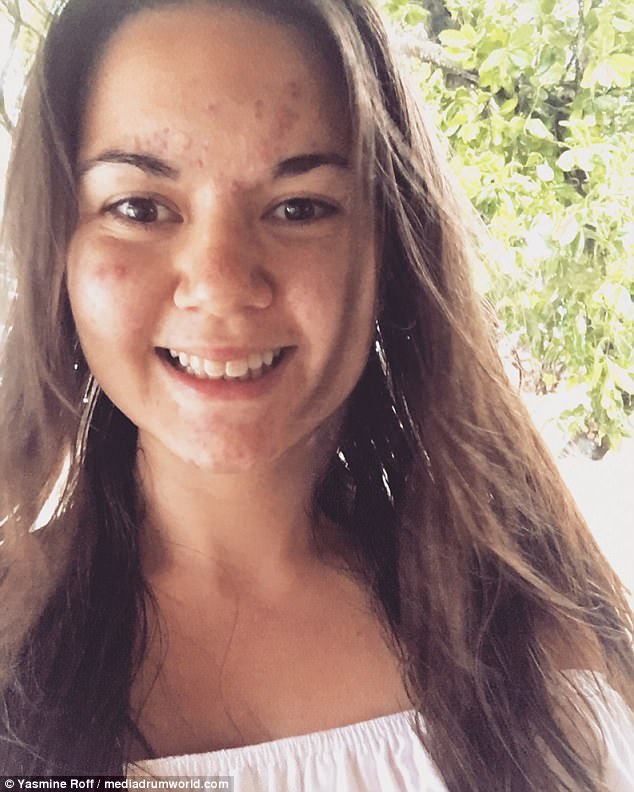 ‘After a couple of months of no improvements I was suicidal and ended up in A&E, as my mum feared I was a risk to myself – I was hysterical 24/7 and frankly – it was terrifying,’ she admitted 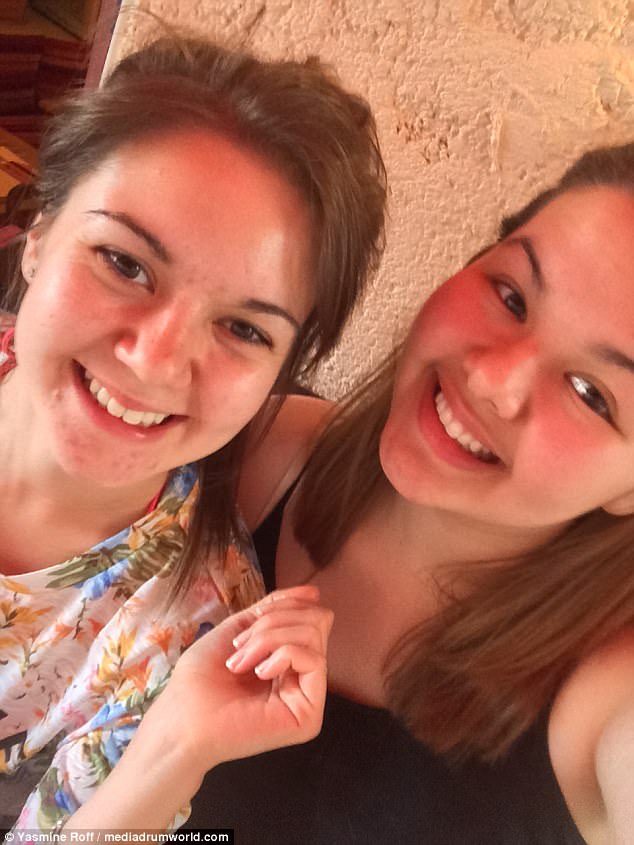 Her skin left her feeling embarrassed and anxious, and she would dread social events in fear of judgement (seen with friend) 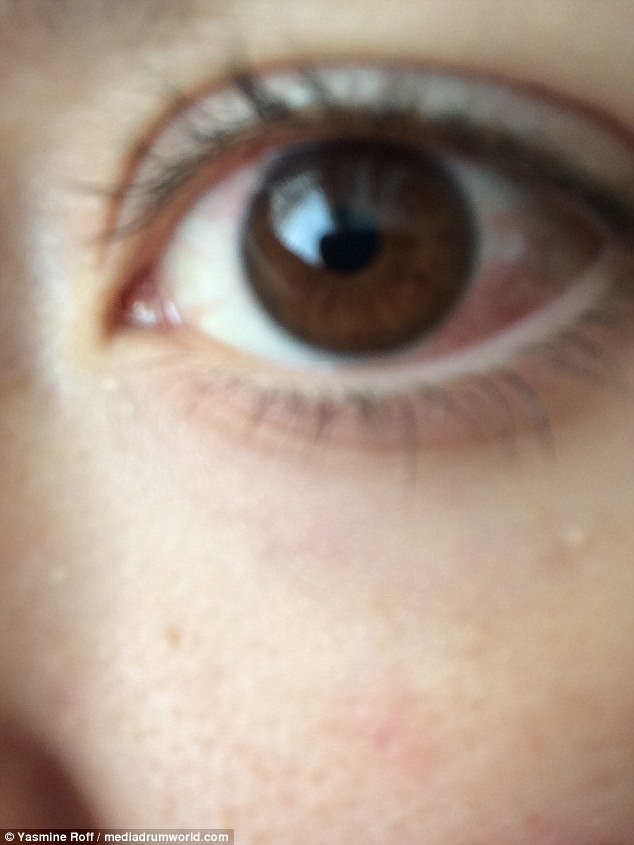 ‘Luckily, about twelve months later, my eyes returned to normal, but my acne came back.’ Yasmine said of coming off the medication (side effect: dry eyes seen) 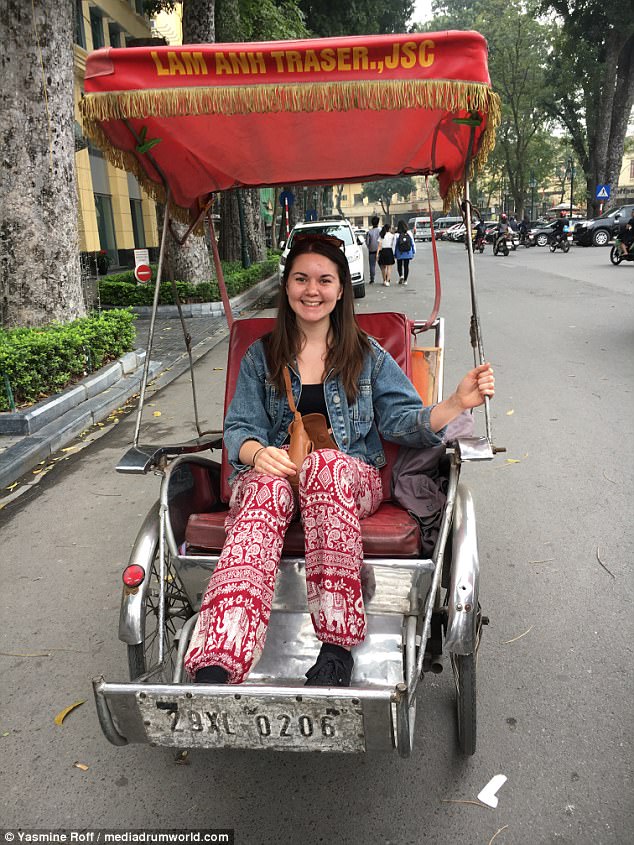 Sugar, dairy, excess carbohydrates, stress and lack of sleep all cause Yasmine’s acne to flare up but she’s now proud of who she is as a person and can see past her blemishes

‘I now treat my acne totally naturally – I have a minimal skincare routine but mainly focus on diet (low carb, low sugar, high fat), gentle exercise, gut health, yoga and stress reduction; this is crucial and I’ve overlooked it for too long.’

Sugar, dairy, excess carbohydrates, stress and lack of sleep all still cause Yasmine’s acne to flare up, but she’s now proud of who she is as a person and can see past her blemishes.

Despite this, some of her friends and family have struggled to come to terms with Yasmine’s holistic approach to her skin.

‘Friends and family still don’t understand. My family still think I should go back on Roaccutane “at a lower dose” – to me this is unthinkable,’ she explained. 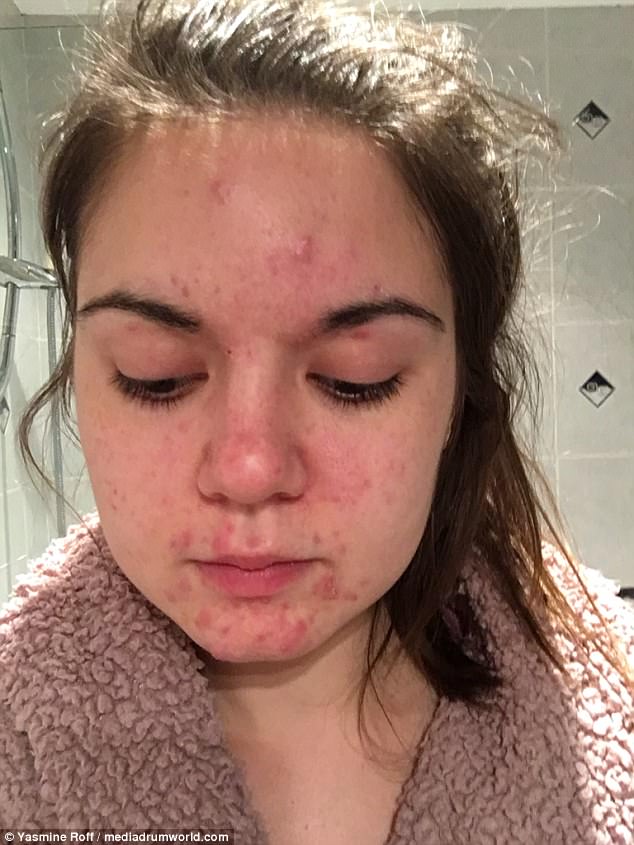 Despite this, some of her friends and family have struggled to come to terms with Yasmine’s holistic approach to her skin 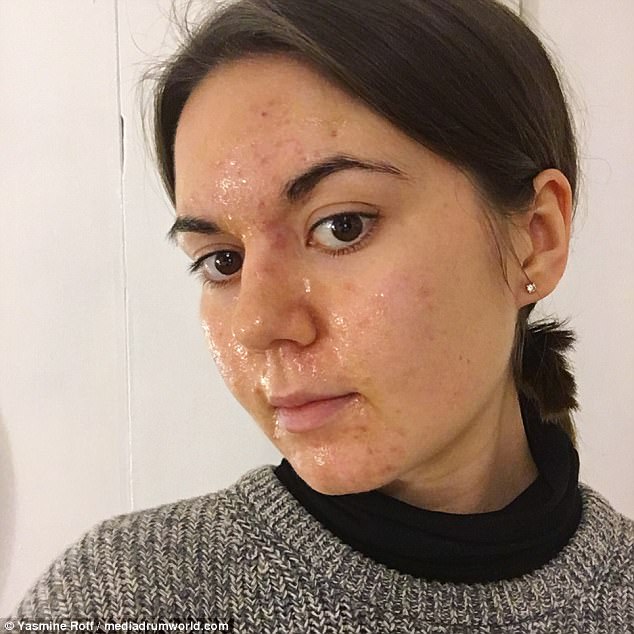 ‘My boyfriend, however, supports my holistic path entirely and loves me just as I am, with or without makeup. I think perhaps older generations don’t understand natural healing – they don’t believe in the power of diet and lifestyle and think doctors know it all! Spoiler: they don’t.

‘My message to others would be do some research and assess your diet and lifestyle.

‘Chronic stress, under eating and excessive exercise all continued to my skin problems, as did a high carb diet and excessive sugar consumption.

‘I would urge people who are looking to clear their skin to join the acne community, learn from others and research natural approaches.

‘Most importantly, I’d urge people to love themselves no matter what; acne does not define you. You are so much more than your skin.’ 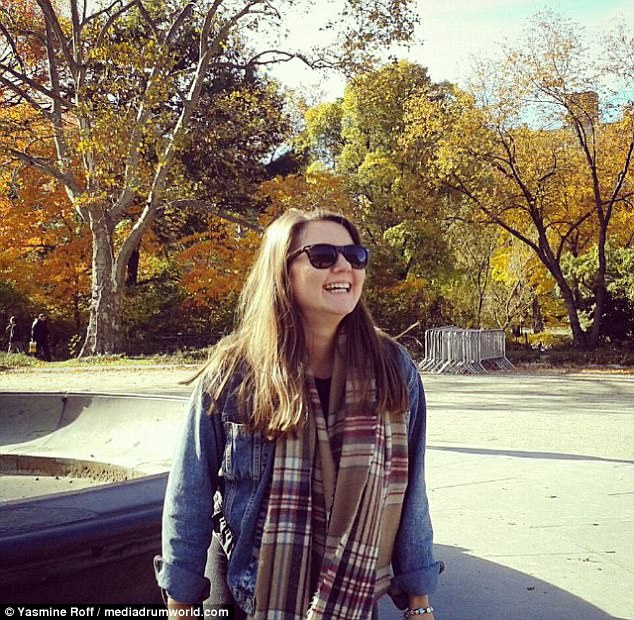 ‘I’d urge people to love themselves no matter what; acne does not define you! You are so much more than your skin,’ she said.

In a lengthy statement Roaccutane manufacturer Roche told MailOnline: ‘Roche Products Ltd. and the regulatory authorities constantly evaluate the safety of all medicines. In the case of RoAccutane® (isotretinoin), the regulators agree that its clinical benefits outweigh the risks.

‘Isotretinoin is an effective licensed medicine for the treatment of severe forms of acne (such as nodular or conglobate acne or acne at risk of permanent scarring) resistant to adequate courses of standard therapy with systemic anti-bacterials and topical therapy. The efficacy and safety of isotretinoin is based on more than 3,000 patients assessed in clinical trials, over 30 years of clinical experience and the ongoing review and assessment of 90 regulators from around the world. More than 17 million patients worldwide have received isotretinoin since it was first introduced in 1982.

‘We understand that severe acne can cause some sufferers to become depressed and can also affect their mood and self-esteem. The information provided with isotretinoin carries a warning that some patients may experience mood changes, including an increase in depression.

‘A study published in the British Medical Journal in 2010 concluded that people who suffer from acne are at an increased risk of suicide. It also concluded that there was an increased risk of attempted suicide during and after treatment with isotretinoin, but that this additional risk is most likely due to the acne rather than the treatment. Additionally, the MHRA concluded in December 2014 that it was not possible to identify a clear increase in risk of psychiatric disorders in people who take isotretinoin compared to those who do not.

‘The patient information leaflet, which is inside every pack of isotretinoin tablets, also tells patients that – before they start taking the medicine – they must tell their doctor if they are depressed, or if they have felt this way in the past. If anyone believes they have suffered a side effect to any Roche medicine they should report it to us directly or to the MHRA via its yellow card system.

‘For further information on the safety and efficacy of isotretinoin in relation to the EMA licence, please see the Summary of Product Characteristics (SmPC) here.’

Roaccutane is a form of vitamin A. It reduces the amount of oil released by oil glands in your skin, and helps your skin renew itself more quickly.

Side effects are common and range from joint pain and dryness of the lips and mouth to depression and dizziness.

Critics of the powerful drug claim doctors ignore its possible side effects, which have been linked to debilitating depression, bowel disease, impotence – and even suicide.

Roaccutane’s manufacturer, the Swiss pharmaceutical giant Roche, has faced thousands of lawsuits in the US.

Developed as a chemotherapy drug, it has proved effective in clearing up acne, however a quick internet search reveals concerns about Roaccutane.

In April 2010, 18-year-old Melissa Martin-Hughes, from Cheltenham, hanged herself after spiralling into depression. She had been taking Roaccutane.

Two-and-a-half years earlier, Angela Lee, 28, stepped in front of a train in Ilford, East London, having left a suicide note claiming Roaccutane had made her feel physically aged. And as far back as 1997, Seamus Todd, son of the late screen star Richard Todd, killed himself after taking the drug.