The former head of Scotland Yard today described watching PC Keith Palmer being murdered as he locked himself in his car and was driven away in the chaos.

Sir Craig Mackey, who was then acting as Commissioner of the Met, told the inquest into Khalid Masood’s death that he saw his officer stabbed in front of him on March 22 last year.

Sir Craig, who will retire at Christmas, was briefly in charge of Britain’s biggest force after Sir Bernard Hogan-Howe left in the February and Cressida Dick did not take over as Commissioner until the April.

He had been meeting Policing Minister Brandon Lewis when he heard a ‘loud bang’ as Masood’s 4×4 smashed into the fence under Big Ben before the terrorist sprinted through security gates and stabbed PC Palmer with a kitchen knife. 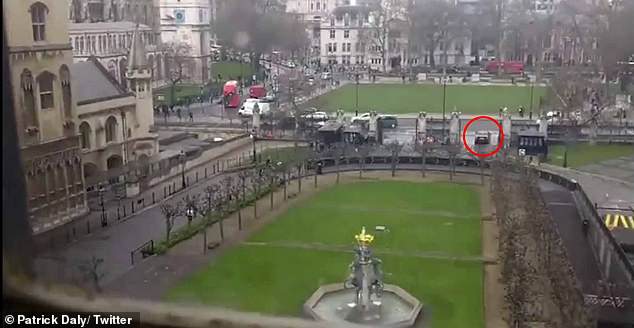 CCTV from the scene shows the Met Chief in his vehicle, circled, as it was swept away

The police officer, who was knighted this year, said he went to get out of the car, which was passing through the vehicle barrier just inside the gates, but was told: ‘Shut the door’ and locked it.

PC Palmer staggered past Sir Craig’s car, pursued by Masood, who was then shot dead by a close protection officer working for then Defence Secretary Sir Michael Fallon.

Sir Craig was then swept away around 30 seconds after Masood, who murdered five people that day, was gunned down. 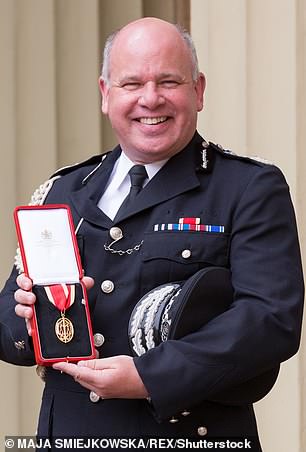 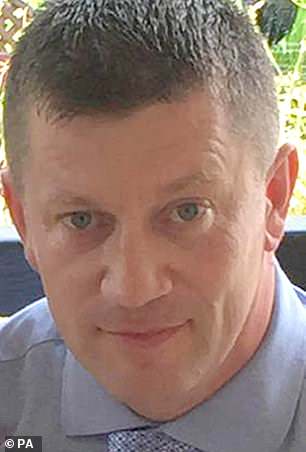 Deputy Commissioner Sir Craig Mackey, who was then acting as Commissioner of the Met, watched in horror as Khalid Masood stabbed PC Keith Palmer in front of him

The inquest into Masood’s death at the Old Bailey heard that Sir Craig, his police driver and his chief of staff, who were both civilians, all locked their car doors.

Sir Craig said: ‘I had no personal protective equipment, no radio, two colleagues with me who were quite traumatised by what they had seen, so we moved out and I began co-ordinating the response.

‘My instinct was not the right response. I was in shirtsleeves, with no radio, I didn’t know if the attack was on going.’ 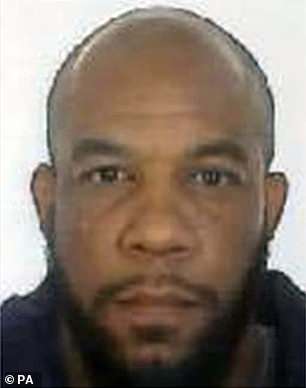 The bang when Khalid Masood crashed his car was heard by Sir Craig, who was at Parliament meeting a minister

Hugo Keith QC, for the Metropolitan Police said: ‘It may seem obvious that had you not locked the car and had you got out would have presented yourself as a further target?’

He replied: ‘Yes, anyone who got in his way would have been a target.’

Describing the attack, Sir Craig said: ‘I could see one of the officers move forwards, PC Palmer, then he appeared to go backwards and then I saw the male who had come in and I saw two stab attempts into the torso of PC Palmer.

‘It was below my sightline so couldn’t tell if they connected but they were two absolutely determined stab movements.

‘It seemed to happen very quickly. The thing that still shakes me is how ever many seconds it was in total. It didn’t feel like that, it felt like an awfully long time.

Mr Mackey had been at a meeting with Brandon Lewis, the Policing Minister, between 2.15pm and 2.45pm, but they had arrived and left early.

He was due to return to Scotland Yard, around the corner on the Embankment, driven by a police driver and accompanied by his chief of staff. 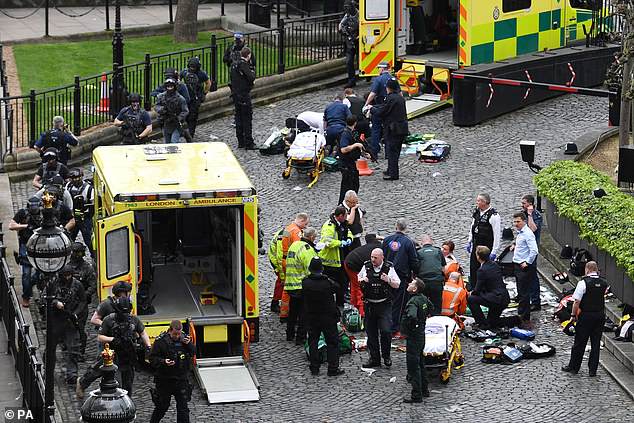 Sir Craig said he went to get out of the car, which was passing through the vehicle barrier just inside the gates, but was told: ‘Shut the door’ and they drove off as the carnage unfolded 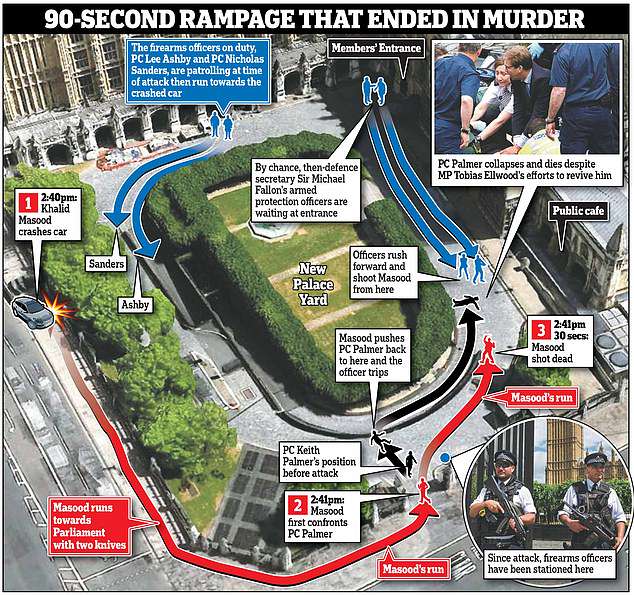 Sir Craig said: ‘I was leaning back to talk to my colleague in the rear of the car, to talk about the meeting and there was a very, very loud bang which came from the direction of Westminster Tube and we both went, “What on earth was that?”.

Khalid Masood, 52, was shot dead after stabbing Pc Palmer, 48, to death and ploughing into four pedestrians on Westminster Bridge in a rented 4×4.

A security review two years before PC Keith Palmer’s death concluded that the gate where he was stationed was ‘vulnerable’ because it was manned by unarmed officers.

But the Houses of Parliament threat assessment was never passed on to police on the ground, the inquest heard.

On the day of Khalid Masood’s attack, no firearms officer was seen near Carriage Gates for almost an hour before PC Palmer was knifed.

Instead, marksmen prioritised the Members’ Entrance which was used by ministers and MPs to attend Prime Minister’s Questions.

A tactical assessment published in early 2015 found that armed officers should be able to quickly respond to an attack at Carriage Gates.

But PC Lee Ashby, one of the firearms officers on duty that day, said he was unaware of the concerns raised. He said it was impossible to provide effective cover for all the gates on his patrol and admitted the system left unarmed officers unprotected ‘more often than not’.

He said he would have shot Masood if he had been at the gate. Firearms officers used to be stationed behind Carriage Gates until 2012.

PC Ashby said he had to cover three other entrances and the fence line, admitting he could not be at ‘more than one place at a time’.

‘I looked towards the gate and I could see officers looking in that direction and my recollection is one officer talking on the radio.

‘I genuinely didn’t know what had happened. It was an unnatural sound. I did think it might have been an explosion at that point, it was so loud and unnatural.

‘The officers were in their usual position just inside the gateline. Everyone started moving on the pavement, everybody is running towards the House of Lords end, some are running into the gates.

‘The gates were open and people were coming in and all of a sudden I became aware of a large male and thought, ‘Oh my god he’s got a knife’.’

He described the man as 6ft tall, very thick set, with a shaved head and wearing dark clothing.

‘He was 8ft to 10 ft into the gates. My focus was very much what I saw in his right hand, it was a butcher’s knife, like you get in a wooden block, a carving knife.

‘I didn’t know at that point if it was connected to the bang or not. Clearly the way that male came in and the purposeful way he came in that was a clear threat.

‘I had an officer in the front of the car with me and a colleague in the car had seen what happened and locked the door.

‘We had no protective equipment at all, no communications, we had been in a ministerial meeting.’

He also murdered PC Palmer after dumping his car.

Temporary Chief Inspector Paul Sheridan, an expert in training firearms officers, told the court it is ‘not like in films’ when someone is shot.

In the first seconds after being hit, no blood may be visible and the person may not realise they have been shot, he said. 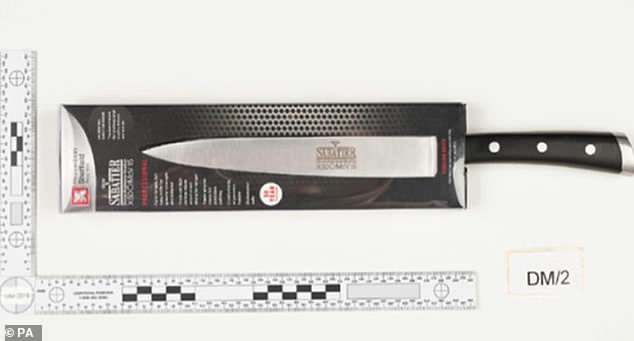 The jury was shown footage of Masood, armed with two bloodied knives, lumbering after officers as they fled following the attack on Pc Palmer.

Two close protection officers can be seen aiming their pistols before Masood crumples to the ground.

In Mr Sheridan’s assessment, the use of lethal force by the marksman who shot Masood three times was ‘entirely justified’.

Chief Coroner Mark Lucraft then told the jury the inquest will adjourn until Wednesday when the two close protection officers will give evidence.

Who are the March 2017 Westminster attack victims? 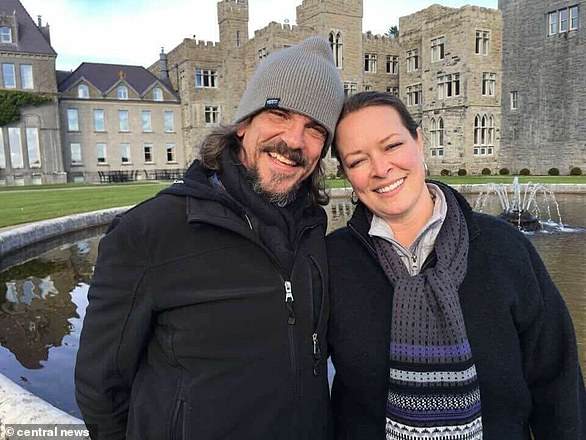 Kurt Cochran, left, was killed by Masood. The US tourist managed to push his wife Melissa, right, out of the way of the 4×4 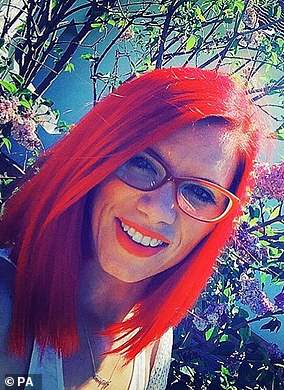 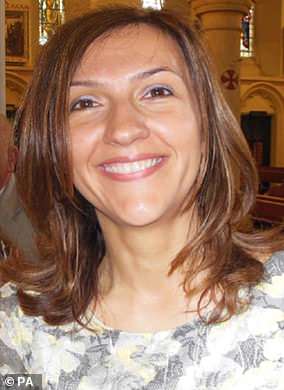 Andreea Cristea, 31, was a tourist visiting from Romania when she was struck by Masood and thrown into the River Thames where she died. Spanish teacher and mother-of-two Aysha Frade, 43, from London, right, was also killed in the attack 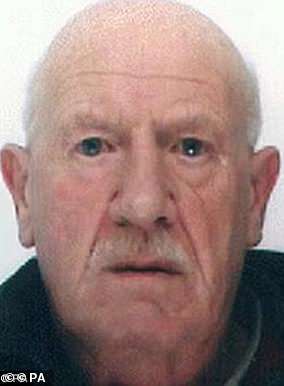 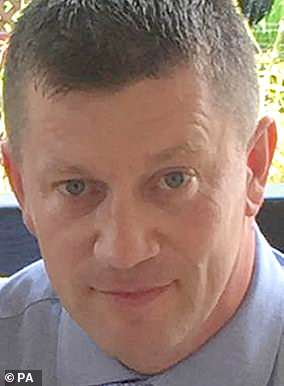 Window cleaner Leslie Rhodes, 75, was thrown into the air and dragged under Masood’s car. He died later that night in hospital. Pc Keith Palmer was the killer’s final victim