High Street meal deals can contain the equivalent of 30 teaspoons of sugar – four times the maximum an adult should eat for an entire day.

The ‘Grab and go’ deals are promoted by stores as a quick, convenient and cheap way to buy lunch.

However, the mix of sandwiches, wraps, drinks and sugary snacks can contain the same amount of sugar as 79 chocolate figures.

For example, a Munch deal from WH Smith that includes a tuna and sweetcorn sandwich, a 500ml bottle of Mountain Dew Citrus Blast drink and a bag of Skittles Crazy Sours, can add up to the equivalent of 30 teaspoons of sugar.

In this case, most of the sugar comes from the drink and sweets that are available under the money-saving deal.

Action on Sugar has revealed that many meal deals can contain as much as 30 teaspoons of sugar – three times more than in a can of Coca Cola, which typically contains 7 tsp per can (pictured: Tesco’s offering, which contains a total of 30 tsp)

A Tesco Smokehouse Pulled Chicken with Mesquite Style Sauce sandwich, together with a 500ml Monster Energy drink and Mars Duo has the same sugar overload.

A Morrisons Sweet Chilli Chicken Wrap, combined with a Relentless Passion Punch Energy 500ml drink and Millionaire Shortbread is not far behind with the equivalent of 28 teaspoons of sugar.

This is on a par with the Co-op Meal Pot Blackbean Pulled Beef & Noodle, eaten with a 500ml Rockstar Blueberry Pomegranate Acai energy drink and Rocky Road Bar.

Health campaigners say the resulting sugar overload fuels obesity among those who typically spend eight hours a day in front of a computer.

The survey was conducted by Action on Sugar, who said some of the deals add up to the equivalent of eating a 1lb bag of sugar every working week.

The group is calling on the Government to stop retailers from using price promotions such as meal deals to encourage the over consumption of products high in sugar and calories.

Just last week the Scottish government announced plans to restrict the promotion of food and drink high in fat, sugar and salt.

The campaigners said it is perfectly possible for retailers to offer healthy options in their meal deals with some combinations adding up to less than one teaspoon of sugar. However, they said the majority of retailers are failing to promote them.

The survey found that 72 per cent of meal deal drinks sold at Morrisons are high, or red under the traffic light labelling system, in terms of sugar per drink. The proportion was a much lower 38 per cent at Marks & Spencer.

Some drinks alone contain up to 70g of sugar – more than 17 teaspoons – when sold in large 500ml portions as part of the meal deals.

A Munch deal from WH Smith that includes a tuna and sweetcorn sandwich, a 500ml bottle of Mountain Dew Citrus Blast drink and a bag of Skittles Crazy Sours, can add up to the equivalent of 30 teaspoons of sugar 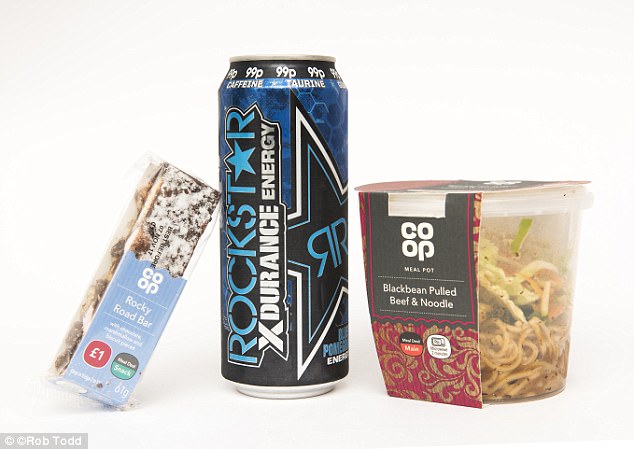 Sandwiches in the meal deal when combined with a sweet treat and an energy drink can quickly add up to a lot of sugar in one sitting (pictured: Co-op’s meal deal containing 28 tsp)

Chairman of the group, Graham MacGregor, professor of cardiovascular medicine at Queen Mary University of London, said: ‘Eating too much sugar is linked to obesity, Type 2 diabetes and tooth decay.

Registered nutritionist Kawther Hashem, a researcher at the group, said: ‘These excessively high sugar combos can have a detrimental effect on people’s health, particularly if eaten daily.’ 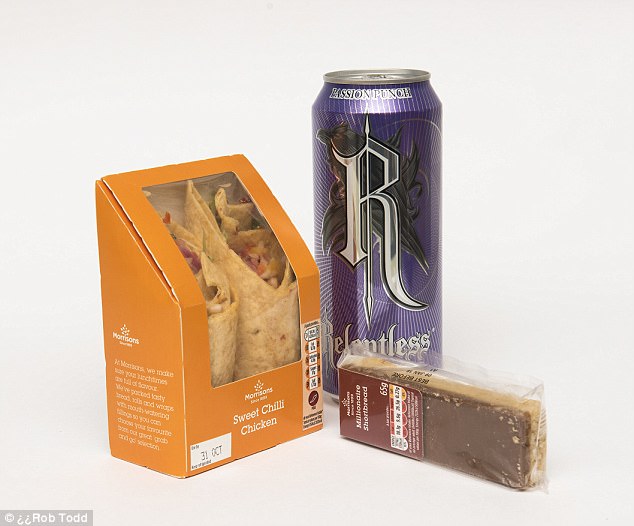 A can of Coca Cola contains roughly 7 teaspoons of sugar, but many of the meal deals contained much more sugar (pictured: Morrisons’ meal deal containing 28 tsp)

Campaign manager for the group, Jenny Rosborough, a registered nutritionist, said: ‘It is time the Government ensured that price promotions including meal deals, are geared towards healthier options.

‘If our Government cares about our nation’s health, they need to tackle this head on.’

The British Retail Consortium, which speaks for stores, said: ‘Customers have never had a wider range of healthy, fresh and affordable options when grocery shopping.

‘Retailers are committed to helping consumers make healthier choices through price promoting fruit and vegetables, reformulating products, and leading the way on providing clear nutritional information, all of which helps customers understand their food and make informed choices.’

The BRC said any measures by Government to improve the health of the nation’s diet should go beyond supermarkets to cover manufacturers and all food outlets.