Activist and grandfather of boy, 11, who was fatally gunned down during July 4 crossfire speaks out

The grandfather of an 11-year-old who was killed on July 4th in Washington D.C. is calling for an end to violence, saluting the local organizers in the community who have protested against guns in the area.

John Ayala, founder of the DC Guardian Angels, shared that the family has been able to get through their grief over the loss of Davon McNeal’s life because of the community’s outreach.

‘We’re getting through it,’ Ayala said to CNN on Tuesday. ‘And one of the reasons we’re getting through it is because members of our community is fed up. And they’ve been out with us for the last nine days walking and marching and informing people, ‘we’re not going to take it any longer.”

John Ayala, founder of the DC Guardian Angels, told CNN that community support was getting the family through the death of 11-year-old Davon McNeal

‘The violence has to stop. Especially the shooting of young people,’ he said.

Ayala’s group works with local law enforcement to curb crime. The grandfather saluted local police for their handling of his grandson’s murder.

‘They got on this right away,’ he stated. Ayala praised D.C. police, who he said released footage that helped members of the community provide information about potential suspects. 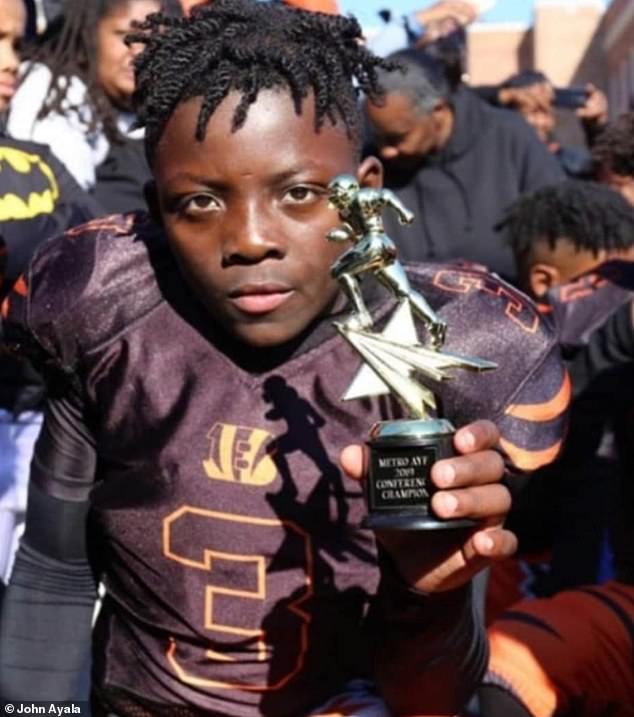 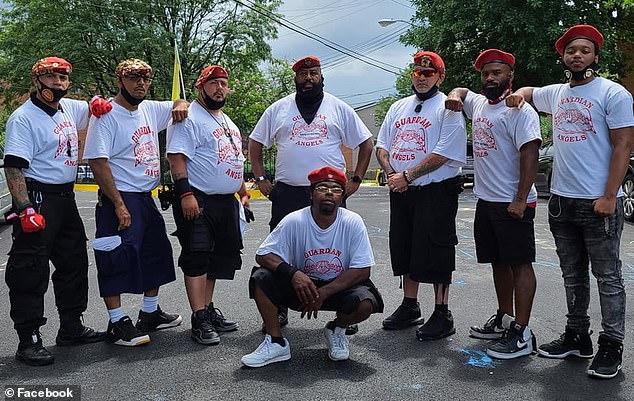 The grandfather’s comments come just a few days after it was reported that one of the suspected gunmen in the shooting had been released from jail three months ago out of fear of the coronavirus pandemic. 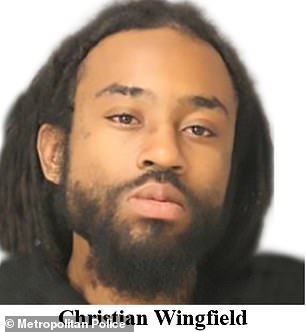 Suspected gunman Christian Wingfield, 22, had been released from custody despite charges of felon possessing a firearm and extended ammo clip in April, WUSA 9 reported Friday.

McNeal was shot in the head on Saturday evening when several shots rang out at the family gathering.

Authorities arrested two suspects – Wingfield and 18-year-old Daryle Bond – and are searching for three others.

McNeal was one of several Americans, including other children, who were killed over Fourth of July weekend as gun violence surges nationwide amid growing distrust of law enforcement.

‘DC judge released Christian Wingfield, suspect in murder of Davon McNeal, 11, after his lawyer said COVID-19 made it too dangerous of him to stay in jail on earlier charges of felon possessing firearm and extended ammo clip,’ wrote WUSA 9 reporter Bruce Leshan on Twitter.

Wingfield was previously arrested in April on the aforementioned charges after authorities discovered him with a gun and high-capacity magazine. 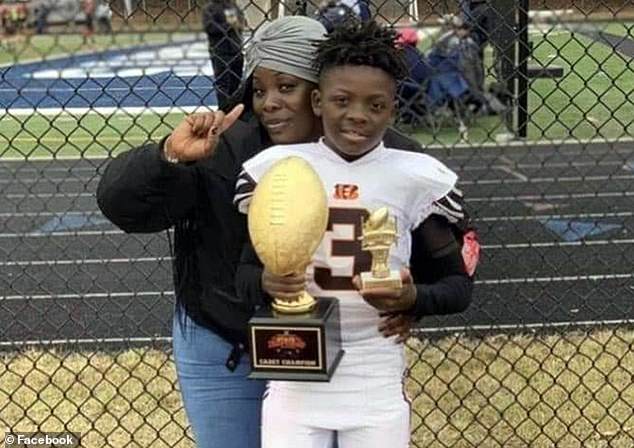 Davon McNeal (centert), pictured with his mother Crystal McNeal (left), was a sixth-grader and student athlete who had dreams of making it to the National Football League

At the time, his lawyer reportedly argued for emergency release because of the ongoing coronavirus pandemic.

Washington D.C. has recorded nearly 11,000 confirmed cases and 568 deaths since the virus reached the US in January. The US now has more than three million cases and 133,000 deaths.

Jails and prisons were identified by public health experts as potential ‘petri dishes’ for coronavirus spread because of the lack of space and subpar sanitation.

Some states, including California, implemented a ‘zero bail’ policy that ruled people arrested for minor incidents would be released quickly with paying bond.

The argument for Wingfield’s release came at a time inmate cases Of the virus at the D.C. Jail edged near 200, but Deputy Mayor for Public Safety and Justice told WTOP that there are currently no cases. 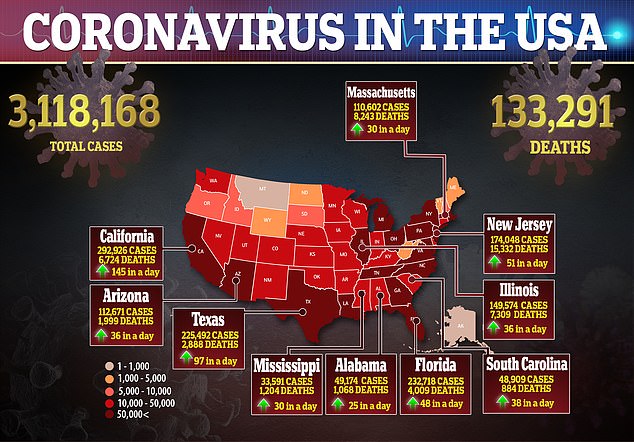 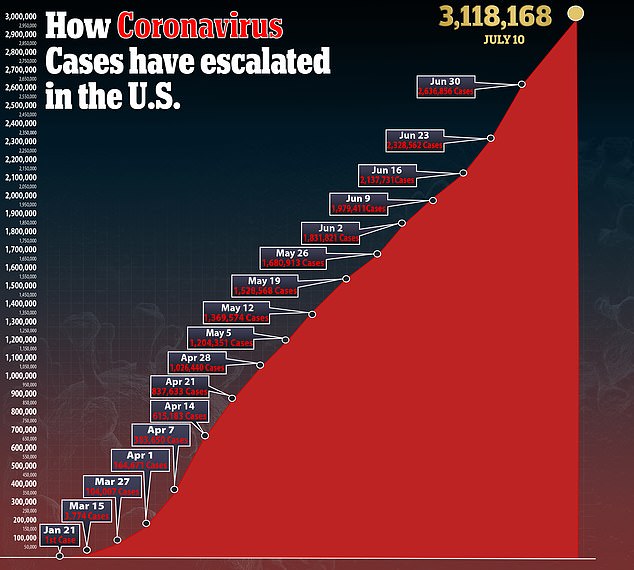 ‘The jails have come a long way since the early part of the pandemic, and for Covid to be used as a reason to let someone violent out back on the street is … a request not based in fact,’ said Kevin Donahue.

Although two suspects have been apprehended, authorities have zeroed in on three others after that tragic Fourth of July weekend.

McNeal was one of 20 children at the family cookout with his mother, Crystal McNeal, who he often helped as she organized donations and hosted events to spread awareness about street violence.

John Ayala told WUSA-TV that his grandson McNeal was getting out of a car to go get a phone charger when shots rang out.

‘He was just getting out of a car to go get a charger to charge his phone while he was going to a cookout, that´s it,’ said Ayala, who is the chief of the Archangel Special Police, which operate in Washington, Maryland and Virginia. 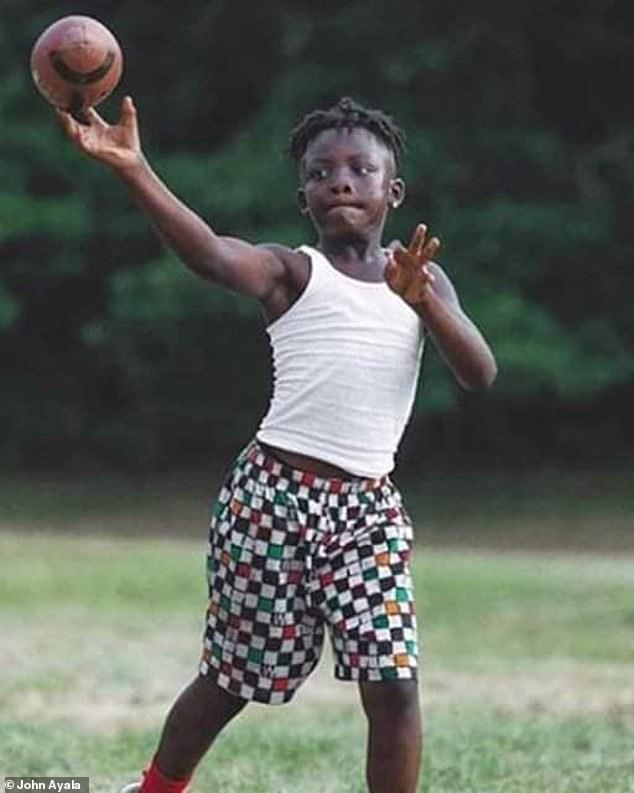 John Ayala, the victim’s grandfather, said McNeal (pictured) was grabbing a phone charger from his mother’s car when a group of five men began shooting nearby

‘And when he stepped out the car, the shots rang and he fell to the ground. The mother thought that he was ducking to not get hit and came to find out he had got shot.’

Police were called to the 1400 block of Cedar Street Southeast to find McNeal lying in his distraught mother’s arms outside their family home with a fatal gunshot wound.

McNeal was a sixth-grade student athlete at Kramer Middle School who dreamed of playing in the NFL. A D.C. Public Schools spokesperson said the boy was outgoing and funny.

Neither a motive for the shooting, nor details surrounding the gunfire have been released.

McNeal was not targeted in the shooting and was not involved in the matter, according to authorities

The Metropolitan Police Department launched an investigation into the incident and are offering up to $25,000 for information leading to an arrest of suspects.

Authorities announced in a statement that Daryle Bond was arrested Thursday and Wingfield on Friday. Both were charged with First Degree Murder while Armed (Premeditated). 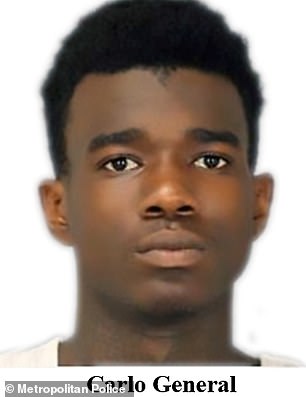 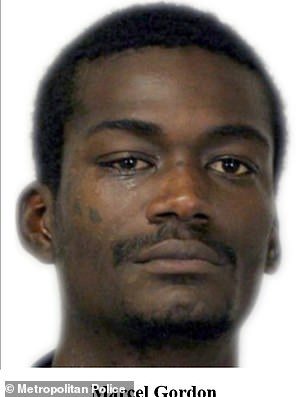 The Metropolitan Police Department are searching for Carlo General, 19, and Michael Gordon, 25, over First Degree Murder while Armed (Premeditated) charges

Bond’s alleged role in the shooting was not disclosed.

All three men are wanted for First Degree Murder while Armed (Premeditated) and should be considered ‘armed and dangerous.’

Police are working on an arrest warrant for a fifth suspect.

‘We will not tolerate this violence,’ said D.C. Mayor Muriel Bowser in a press conference. ‘Davon should be with his family today.’

Bowser added that the city was going through a gun pandemic just as much as it was fighting through the coronavirus.

‘The other pandemic that we have to respond to is just this sense of hopelessness with guns that will kill other kids,’ she told WTTG. 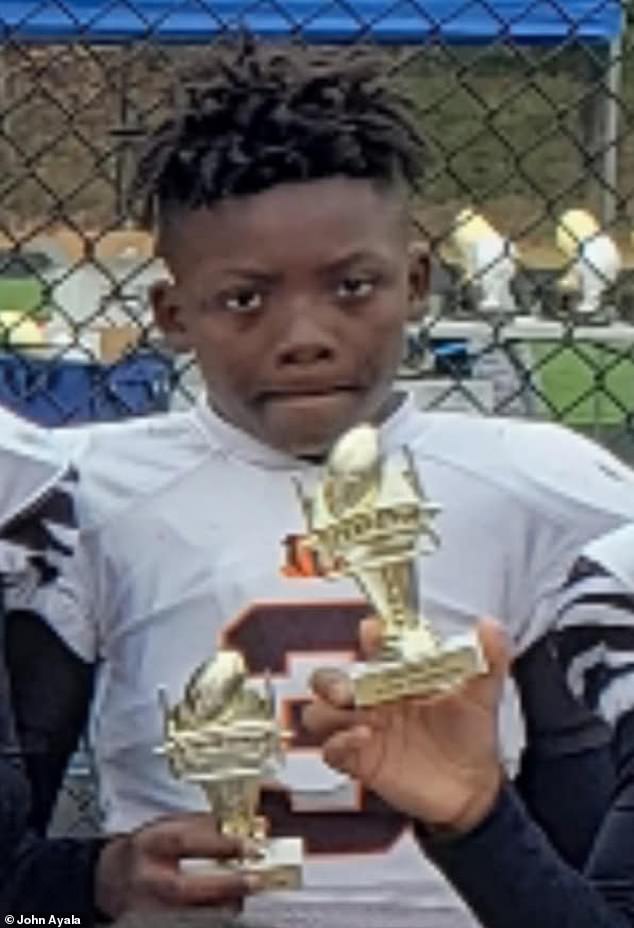 Chief Newsham added: ‘Not surprisingly, all three of these suspects had gun-related criminal history.’

Wingfield was under pretrial high-intensity supervision with a specified curfew and GPS monitoring at the time of the shooting.

Authorities know that Wingfield cut off his GPS bracelet around the time McNeal was shot, and believe he may have even tried to change his identity.

D.C. police are asking for the public’s help in gathering information on the shooting, including any sightings of a black car they say fled the alley.

During the press conference, Ayala called his grandson a ‘great joy’ and thanked local leaders and police for continuing to investigate.

‘Everybody participated in trying to close this case … But of course, I’m still sad because I lost my grandson,’ he said.

The grandfather of Davon McNeal, the 11yo boy shot & killed in SE DC last night, cried, pleading for parents to step-up. Says his daughter, a Violence Interrupter who works with @trayonwhite held a July 4th event to watch the fireworks when MPD says a group started shooting. pic.twitter.com/r3pu3zbhZx

Ayala said his grandson loved playing sports, especially football. But he also was by his mother’s side while she has taken donations, hosted events and set up cookouts to create awareness against street violence.

‘Eleven-year-old son is right on the side seeing that stuff, getting that role model, you know, and that was what we need in the Black community,’ Ayala said.

A separate video shared to Twitter showed Ayala overcome with emotions as he urged people to put down guns.

One hour after Bond’s arrest, hundreds of people flocked to a vigil held at the boy’s middle school and shouted ‘Davon!’ NBC Washington reports.

Members of his youth football team arrived wearing the team’s official colors, black and orange, before releasing balloons into the sky.

Some balloons were shaped like the number three – McNeal’s football jersey number.

‘When I heard the news that Davon was shot, I was hurt. I couldn’t stop crying,’ one teammate said.

Crystal McNeal, the victim’s mother, took the microphone at one point and thanked the community for supporting them. 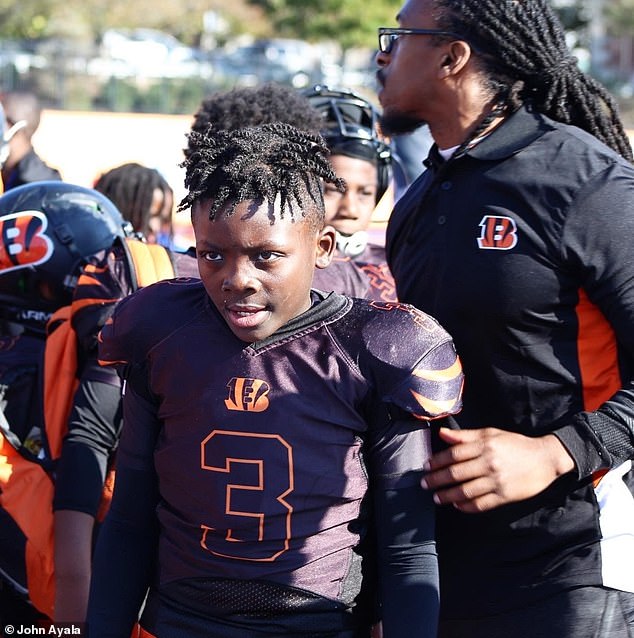 An hour after the first suspect arrest, a vigil was held at McNeal’s (pictured) middle school where his football teammates wore their team colors

‘We love y’all. Davon is with me right now. My son is right here beside me,’ said Crystal.

Although McNeal had NFL dreams, the impact of his mother’s community activism shaped his character.

‘He is not just going out playing sports, but he was at his mother’s side trying to do something positive in the community.’ said Ayala.

‘So you got a woman that (is) doing something positive every day, getting donations, which she could be out doing anything else and she’s fighting against violence, and then it hits home when her own son is shot and killed.

Ayala added that his grandson is not the first child in D.C. to killed by gun violence – and he won’t be the last.

‘He was with his mother, going to do a positive cookout for the community. And just in a matter of seconds, stepping out to get the charger, he was shot,’ said Ayala.

Anyone with information about this case is asked to call the police at 202-727-9099. Additionally, anonymous information may be submitted to the department’s Text Tip Line by sending a text message to 50411.