Aboriginal model and activist Aretha Brown has made her mark for the second year in a row during an Invasion Day rally in Melbourne, protesting Australia Day.

The outspoken 17-year-old was filmed addressing the 30,000-strong crowd during Friday’s march, giving a powerful speech.

Ms Brown thanked the community for rallying around the protest to change the date of Australia Day, held annually on January 26.

Aretha Brown, the outspoken Aboriginal 17-year-old was filmed addressing the crowd during Friday’s march, giving a powerful speech in front of thousands 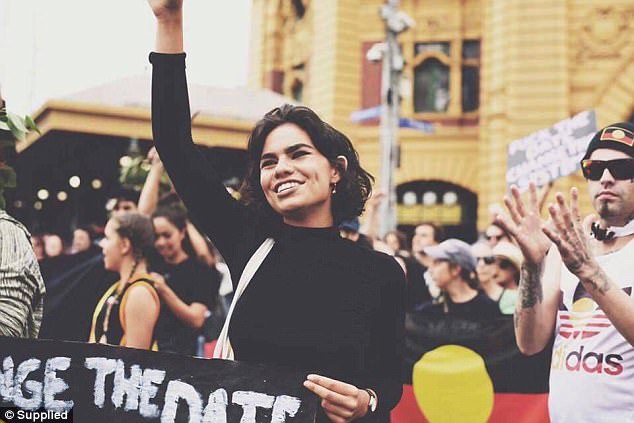 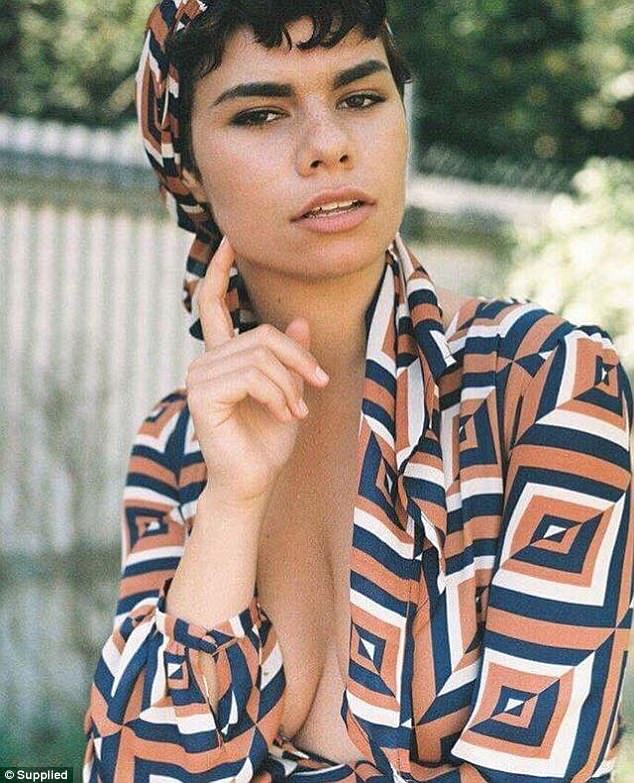 In the moving moment, the crowd recites ‘I see you’ back to the young model.

‘I wanna say I acknowledge all the mob up in Don Dale and in the detention centres,’ Ms Brown said, her voice breaking.

‘I see you…we see you,’ the crowd chants.

The 17-year-old continued: ‘I want to say thank you to all the young, black brothers out here who show us their pride, every time, keeping our culture alive.’

‘I want to say thank you to all the Aboriginal queer fellas out here who have two burdens and have to face two types of oppression.’

The Melbourne-based activist rose to prominence during last year’s ‘Invasion Day’ rally, when she gave a speech to 50,000 supporters.

Since then she has been elected ‘Prime Minister’ at the National Indigenous Youth Parliament.

‘Today I speak for all the young Aboriginal fellas out here – we’re gonna take everything our elders, and all the people that came before, taught us…we’re gonna keep this tradition on,’ Ms Brown said on Friday. 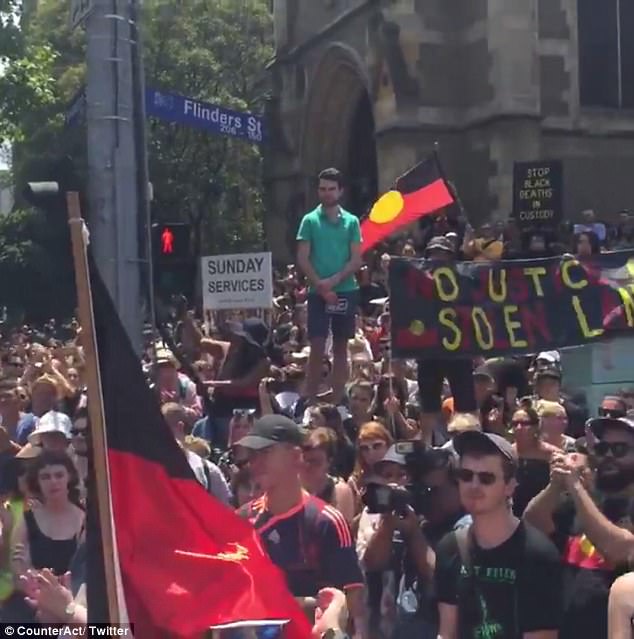 In the moving moment, the Melbourne crowd recites ‘I see you’ back to the young model 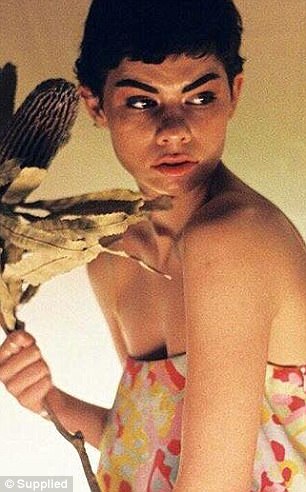 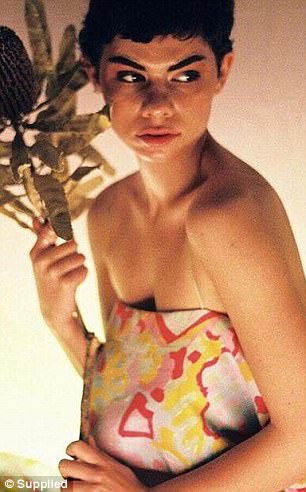 ‘We’ve been working so hard, and at school, and we’re gonna do everything we can just to make you more proud, so thank you.’

Her powerful speech came just days after stating Australia Day is the only time of the year that anyone ‘gives a s**t’ about Indigenous affairs, as it could affect their public holiday.

Amid an increasingly divisive debate over the date of Australia’s national day, Ms Brown said January 26 would be better served as a national day of mourning.

‘No one really cares about indigenous affairs, if there’s a chance that some guy might lose his barbecue then it’s suddenly a national debate – everyone wants to talk about it,’ she told Daily Mail Australia.

‘This is the one time of the year when people actually give a s**t  about Indigenous activism, affairs and politics and the only reason they do is because it would affect their public holiday.’

‘If I were to talk about the Uluru treaty, or Don Dale throughout the entire year it doesn’t get mentioned.’

Ms Brown said the national holiday made her uncomfortable. 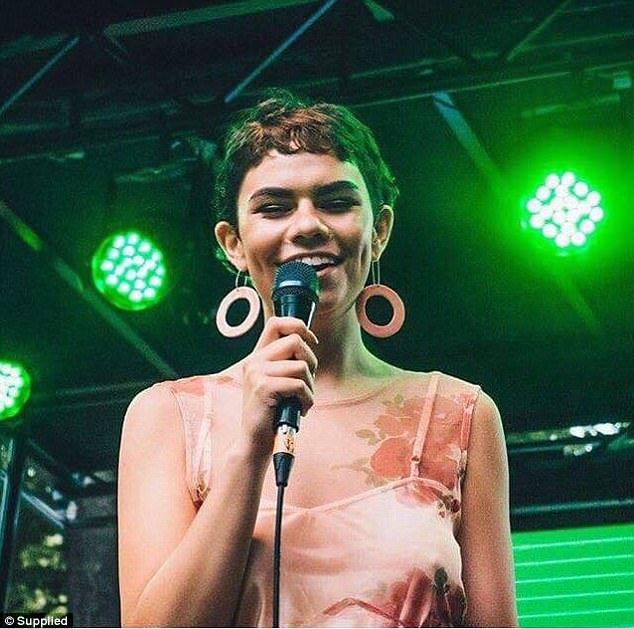 ‘This is the one time of the year when people actually give a s**t about Indigenous activism,’ Ms Brown said

‘For me it has never been a public holiday – I can’t celebrate it and none of my family would ever celebrate it,” she said.

‘Australia Day hasn’t even been changed yet – it’s the idea that we might need to change the date that freaks people out.’

Ms Brown said being elected as the first female Indigenous Youth Prime Minister, and youngest at 16, was one of her proudest achievements.

‘I was so amazed, it was really cool – not only being the youngest but the first female, I just didn’t think that was even possible at all, it just shows the level of respect and maturity from the people who elected me,’ she said.

While Ms Brown said she knew Australia Day was part of our history and most Australians attributed their ‘identity’ and ‘way of life’ with the celebrations on the controversial day, she questioned how hard it was for ‘people to step back’ and ‘look at the other side of it that isn’t theirs’.

‘The weirdest thing is when I go to supermarkets and there is a little display shelf of Australia Day merchandise. How weird would it be if there was all Aboriginal stuff, people would lose it – they wouldn’t be able to handle it,’ she said. 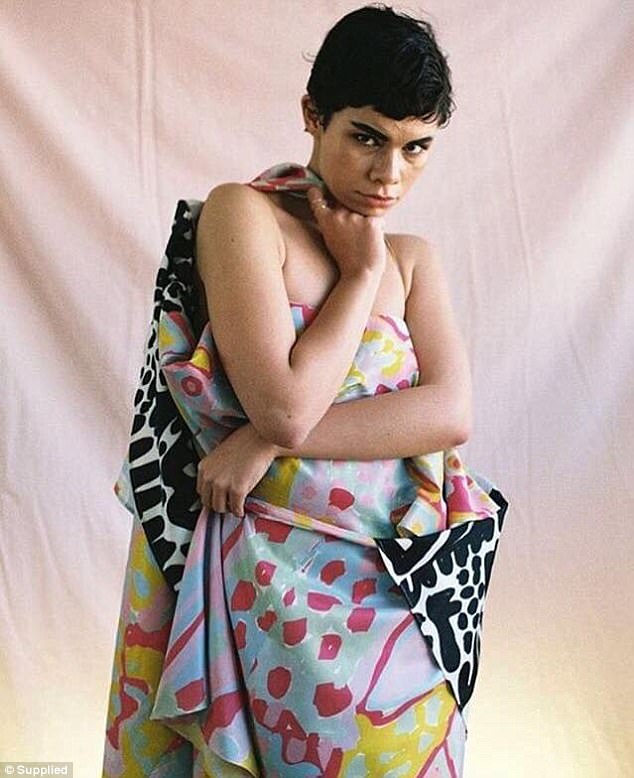 Despite her success as a model, she plans to turn her back on the fashion industry and study a degree that will contribute to her activism

Ms Brown said the reaction to her speech last year was positive and she had ‘erased’ all the memories of the few ‘mean, hateful and racist’ comments she had received.

‘Unfortunately what social media does is it gives legitimacy to people whose opinions aren’t worth noting sometimes,’ she said.

Despite her success as a model, she plans to turn her back on the fashion industry and study a degree that will contribute to her activism. She finishes high school this year.

‘I would like to study race relations – anything that can help me with my activism. Activism fuels me and it’s what I am most passionate about,’ she said.