An activist who threw a pink sex toy at a politician during a press conference has been banned from returning to the same area on New Zealand’s national day.

Nurse Josie Butler threw the phallic-shaped toy at MP Steven Joyce as he was giving a press conference at Waitangi on New Zealand’s North Island in February 2016.

After she hit Mr Joyce in the chin, she cried out ‘that’s for raping our sovereignty’ in protest of the controversial Trans-Pacific Partnership trade deal.

Despite being given a trespass notice by police last week, she vowed to attend Waitangi Day commemorations being held at the same spot on Wednesday.

On Tuesday, Ms Butler arrived at the Te Tii Waitangi marae meeting place and was handed a second trespass notice by police.

Waitangi Day marks the date New Zealand’s founding document – the Treaty of Waitangi – was signed in 1840, bringing an end to wars between the native Maori and arriving British. 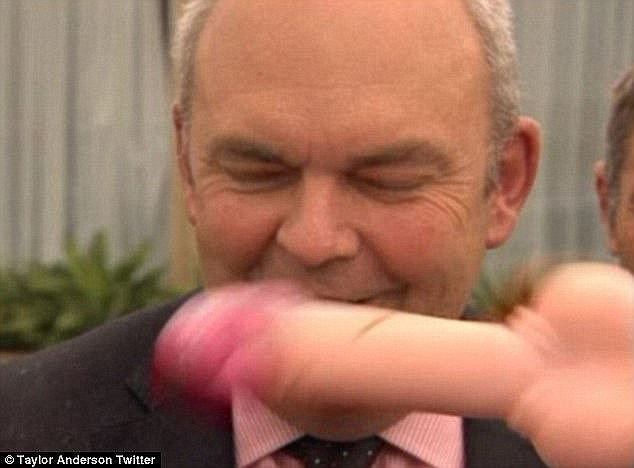 After she hit Mr Joyce (pictured) on the chin, she cried out ‘that’s for raping our sovereignty’, in protest of the controversial Trans-Pacific Partnership trade deal

She said she had extra motivation to visit celebrations after finding out her great-great-great-grandfather had signed the Treaty of Waitangi, known as New Zealand’s founding document.

‘I feel really hurt that the opportunity has been taken away from me,’ she said in a video posted to Facebook.

‘I feel really disillusioned that I could be trespassed from my ancestral lands without even having an opportunity to explore them.’

Mr Brash’s views on the relationship between Maori and European New Zealanders led to him being pelted with mud as he made his way onto the marae grounds in 2003.

‘Don Brash, [a] person who completely opposes Te Tiriti Waitangi [the Treaty of Waitangi]. Don Brash, the person who thinks the Waitangi Tribunal should be abolished. Don Brash, man who has been banned from universities because of his hate speech towards Maori,’ she said. 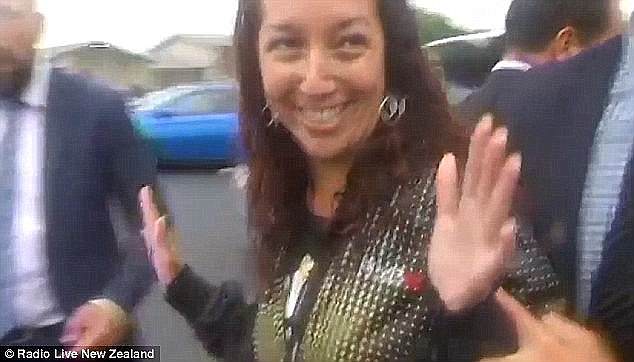 ‘I think this is a really good example of where our race relations are at today. Decisions being made on our behalf, without us being allowed even a voice in these decisions and when we shout often we are completely ignored.

‘I will be attending this year, I will be exploring my ancestral land and I will not be causing a fuss.’

Ms Butler has claimed her sex toy toss was for a ‘really good cause, and a good way of getting the community involved’.

The incident received worldwide attention, leading to a flag with an image of Mr Joyce being hit in the face being flown by New Zealand Oscar-winning film director Sir Peter Jackson.