Lights Off Broadway: Actors and Carnegie Hall musicians from shows disrupted by Manhattan power outage take to the streets and CONTINUE their performances in incredible NYC scenes

The widespread New York City power outage on Saturday evening left hordes of Broadway and Carnegie Hall show goers holding expensive tickets to cancelled concerts ⁠— but for some performers, the show must go on.

The casts of We Come From Away, Waitress and Hadestown were seen singing tracks from their musicals while their would-be audiences crowded around them under their respective theaters’ dark marquees.

Their performances were shared on social media. 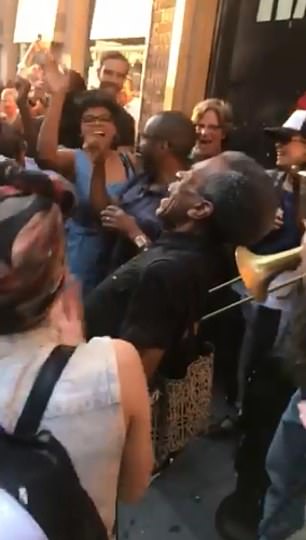 Casts from some Broadway shows, including Hadestown (pictured), took to the streets beneath their dark marquees to entertain their disappointed would-be audience

Further uptown, the members of the Millennial Choirs and Orchestras took over the sidewalks and street outside the legendary concert hall for an a capella version of their performance.

The power outage, which was caused by a transistor fire, forced the cancellation of nearly 30 Broadway, including Harry Potter and the Cursed Child, The Lion King and the Book of Mormon, according to Broadway World.

Ticket holders for Be More Chill, Beetlejuice, Beautiful and Burn This lucked out though, as those shows were able to go on as scheduled.

Thousands of Jennifer Lopez fans at Madison Square Garden were not so fortunate, however, as the venue was in the path of the power outage.

Video shared with CNN showed fans still in their seats in the darkened venue, clapping and cheering despite the power outage. A fan said that the power went out just before Lopez started to sing her fourth song. Eventually fans were told to evacuate as it was clear the show would not be continuing. 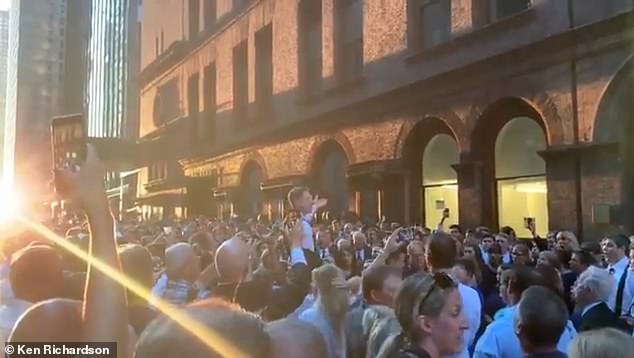 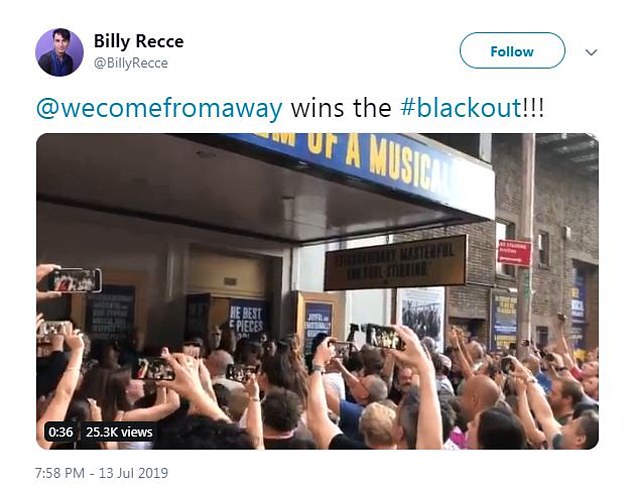 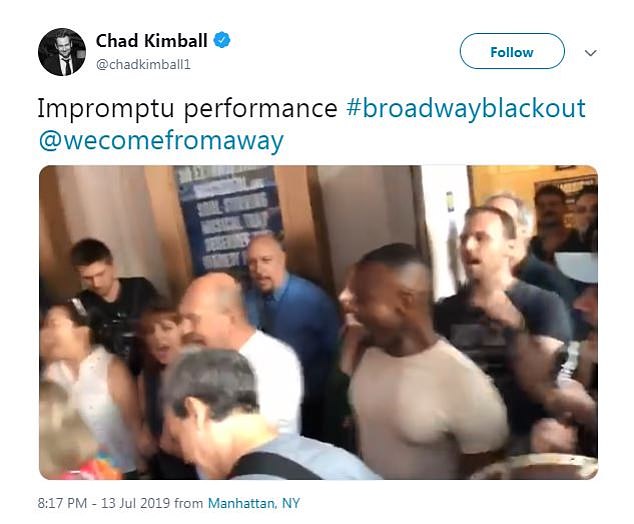 Lopez took to Twitter to say that she was ‘heartbroken’ about the rest of her show being cancelled and that it would be rescheduled.

A New York City Fire Department spokesman said the cause of the outage, which has left more than 45,000 Con Edison customers without power, was being investigated.

The New York City Fire Department said the cause was a transformer fire which started at West 64th Street and West End Avenue.

‘FDNY is operating at numerous stuck elevators throughout the West Side and subways,’ the spokesman said.

The outage comes on the anniversary of the 1977 New York City outage that left most of the city without power.

The city’s subway system said it was working with utility Con Edison to determine the root cause of the outage, which it said was affecting Midtown and the Upper West Side.

‘Several stations are currently without power and are being bypassed by all trains,’ it posted on Twitter.

ConEd said on Twitter: ‘We are responding to extensive outages on the Westside of Manhattan. We will share more information as it comes in. Thank you.’

An update from ConEd at 8.08pm read: ‘We are working to restore power to 42,000 customers primarily in the Westside of Manhattan.’

Corey Johnson, the New York City council speaker, said on Twitter that the ConEd substation at West 49th street had a ‘major disturbance’ and that ConEd was working on fixing it.

With some stations and traffic lights dark, many residents and visitors alike took to the streets and walked, according to social media posts, many of which had the hashtag #blackoutnyc.