Lena Wilson of The New York Times shared a screenshot of the message on Twitter Thursday that shows a message she received from the actress who was seemingly unhappy with the review.

‘Ur review was great, maybe if you had gotten ur eyes off my tits you could’ve watched the movie!’ the message from Stenberg reads.

The actress later posted on Instagram that she thought since she is gay and Wilson is gay, that they would both think her DM was funny.

But Wilson, who posted on social media that she was a fan of Stenburg’s, did not think it was funny, and said she was devastated by the message.

In Wilson’s review that was published on August 4, Wilson wrote: ‘The only thing that really sets Bodies Bodies Bodies apart is its place in the A24 hype machine, where it doubles as a 95-minute advertisement for cleavage and Charli XCX’s latest single.’

The film, which follows a group of rich 20-somethings at a party that goes awry at a remote family mansion, is described by Wilson as ‘bloated with pompous irony’ and said it is ‘perfectly tailored to one of A24’s key demographics: bougie 25-year-olds who value branding over substance.’

Wilson posted another tweet in the thread that read: ‘always weird when the homophobia is coming from inside the house but this is something’ 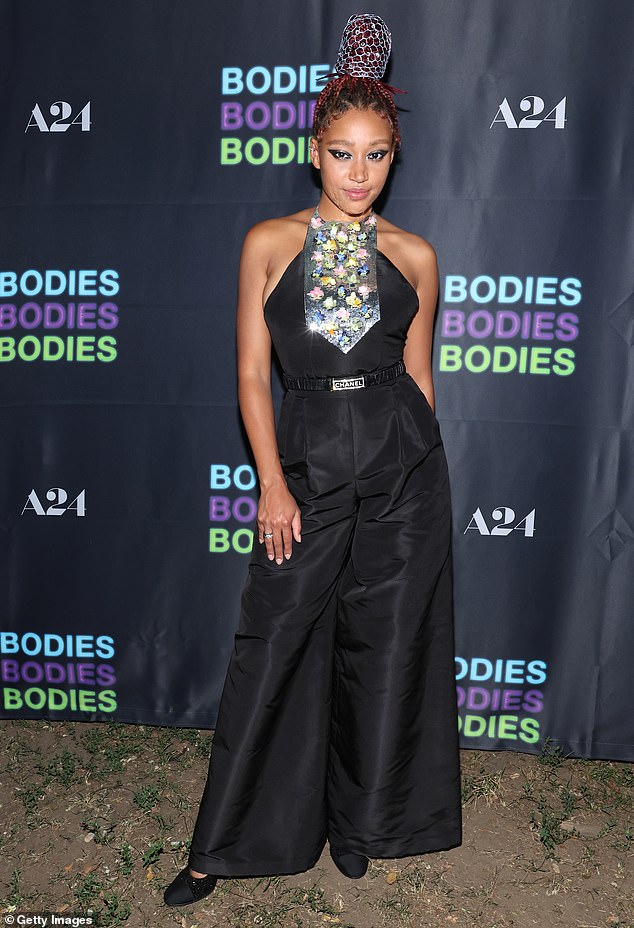 Wilson shared a screenshot of the message and tweeted: ‘do you think she Instagram DM’d Alison Willmore, Justin Chang and Anthony Lane like this or..’

The names mentioned in her tweet are other film critics.

In Wilson’s response to the actress, she writes: ‘hey, amandla! generally a big fan of your work, but this sure is something. really wishing you well in your career and life. have a nice night.’

Wilson posted another tweet in the thread that read: ‘always weird when the homophobia is coming from inside the house but this is something.’

This is believed to be in reference to Stenberg’s sexuality, as she confirmed that she is a lesbian in 2018.

The critic followed up with another tweet pointing out that one line of her 500-word review facetiously comments on the objectifying of young women to sell content – yet random men on Twitter and now, Stenberg, are accusing her, a lesbian, of being unable to ‘stop talking about boobies.’

The tweet reads: ‘me: (spends one line of a 500-word review facetiously commenting on how A24 objectifies young women to sell content)

In a video posted to her TikTok account, Wilson explained the situation.

‘Ironically praised the acting, though,’ she said of the review, adding she doesn’t want anything else to come from this.

‘I am devastated to have received this message in the first place. I was a genuine, huge fan of hers. But I’m posting it because I don’t want this person – who has more social power than me – to think that it’s f—— ok to do something like this.’

DailyMail.com reached out to Wilson who declined to comment.

‘I’m receiving a lot of commentary on the internet for being a very naughty girl and for sending a DM that I thought was hilarious,’ the actress said.

‘There’s this film critic and her name is Lena Wilson and she writes for the New York Times. She described [the movie] as a ’95-minute advertisement for cleavage,’ which I thought was hilarious. I’m proud that a piece of work that I was part of was described as such in such a renowned publication.’

She also talked about a more serious side of the message, saying she had faced a lot of commentary on her chest throughout her career.

‘I wore this tank top in this movie because me and the costumed designer felt it fit the character well. I do get tired of people talking about my chest. There seems to be a lot of unwarranted conversation about my chest,’ Stenberg said. 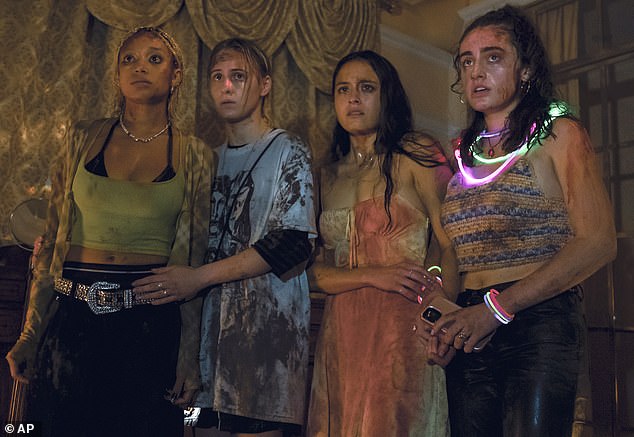 The film, which follows a group of rich 20-somethings at a hurricane party that goes awry, is described by Wilson as ‘bloated with pompous irony.’ Pictured from left, Amandla Stenberg, Maria Bakalova, Chase Sui Wonders and Rachel Sennott

In the review, Wilson tells readers that if they’re fans of slashers, they’ll recognize the plot: ‘Young, hot people get trapped in a remote locale and are picked off one by one.’

But points out that the film is ‘visually appealing and nicely acted.’

‘But this film is not special, and like its shallow characters, it is persistently unaware of its own inanity,’ she wrote.

‘Stocked with fresh talent — Maria Bakalova (‘Borat Subsequent Moviefilm’), Rachel Sennott (‘Shiva Baby’) and Chase Sui Wonders (‘Generation’) are among the glitzy cast — this could be a scathing satire. Instead, ‘Bodies Bodies Bodies’ is so intent on oozing cool-kid apathy that it serves up a whole lot of nothing.’

DailyMail.com has reached out to Stenberg’s representative for comment. 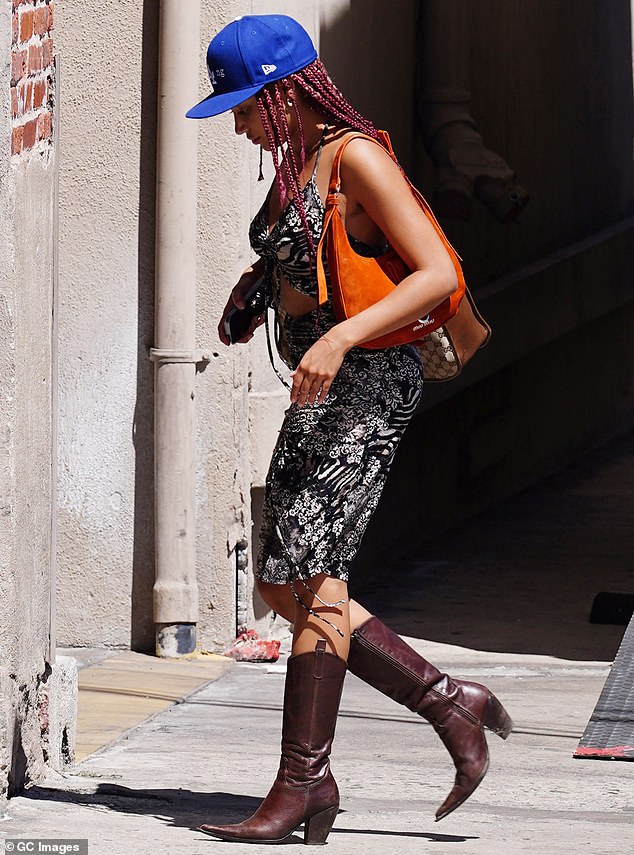 Amandla Stenberg is seen on August 11, 2022 in Los Angeles, California, has been recognized for her outspoken views, particularly towards her activism for LGBT youth 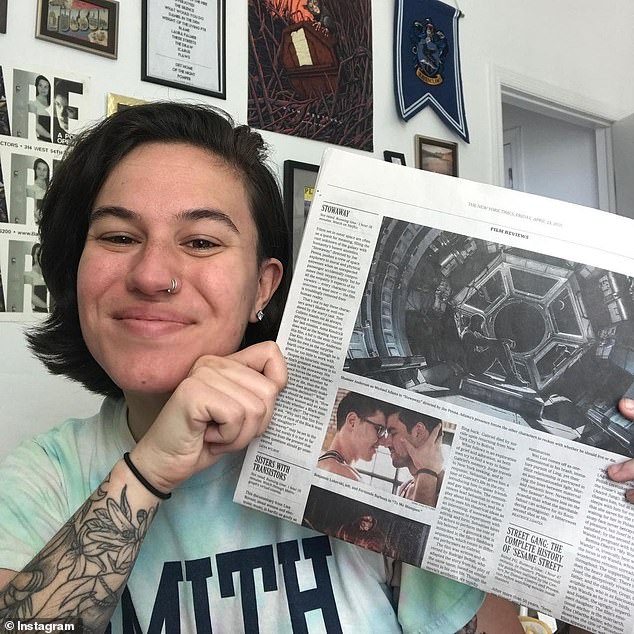 Wilson, pictured in 2021 showing off one of her reviews, says she has always been a big fan of the actress. She responded to Stenberg: ‘hey, amandla! generally a big fan of your work, but this sure is something. really wishing you well in your career and life. have a nice night’

Stenberg has been recognized for her outspoken views, particularly towards her activism for LGBT youth.

In 2015, she made her musical debut as part of the folk-rock duo Honeywater. Her single, ‘Let My Baby Stay’ was featured in the film Everything, Everything (2018).

Stenberg made her acting debut with the film Colombiana (2011), and had her breakthrough playing Rue in the film The Hunger Games (2012).

She had the recurring role of Macey Irving in the series Sleepy Hollow (2013–2014), voiced Bia in Rio 2 (2014) and starred as Halle Foster in the sitcom Mr. Robinson (2015). She garnered acclaim for her portrayals of Maddy Whittier in Everything, Everything (2017) and Starr Carter in the film The Hate U Give (2018).