The great granddaughter of New York Giants founder Tim Mara and Pittsburgh Steelers founder Art Rooney Sr., actress Kate Mara has publicly voiced her support for NFL players who have been protesting inequality by refusing to stand during the national anthem.

‘I believe everybody has a constitutional right to stand, or kneel or sit during the national anthem,’ Mara told Variety of the controversial protests.

Mara once sang the national anthem before a Giants game in 2005.

The protests were initiated during the 2016 NFL preseason by then-San Francisco 49ers quarterback Colin Kaepernick as a way to raise awareness about police brutality against minorities and other areas of inequality in America. Although Kaepernick has been out of the league since March of 2017, the protests have continued in the face of immense criticism. 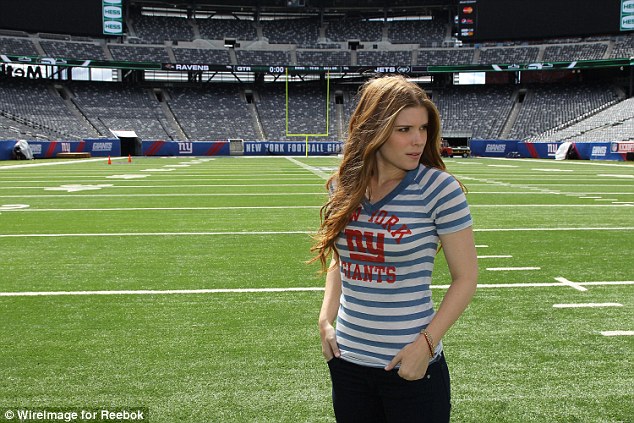 President Donald Trump, for one, has seized on the issue, calling protesting players ‘sons of b******’ and demanding that anyone who kneels should be punished by the league.

Giants co-owner John Mara, Kate’s uncle, has also been vocal about the strain the controversy has put on the league.

‘All my years being in the league, I never received more emotional mail from people than I did about that issue,’ Mara told MMQB.com in 2017.

‘I think the fans in this day and age have become accustomed to the teams being on the field standing for the anthem and I don’t think that’s too much to ask,’ Rooney told the Pittsburgh Post-Gazette in May. 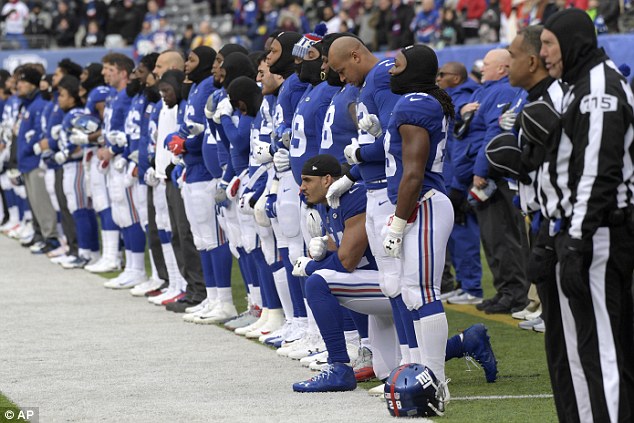 Kate Mara was interviewed at an event celebrating the 25th season of NFL Sunday Ticket on DirectTV, where she was photographed with former Giants wide receiver Victor Cruz (left). Her uncle John Mara (right), the Giants CEO and co-owner, has publicly opposed the protests 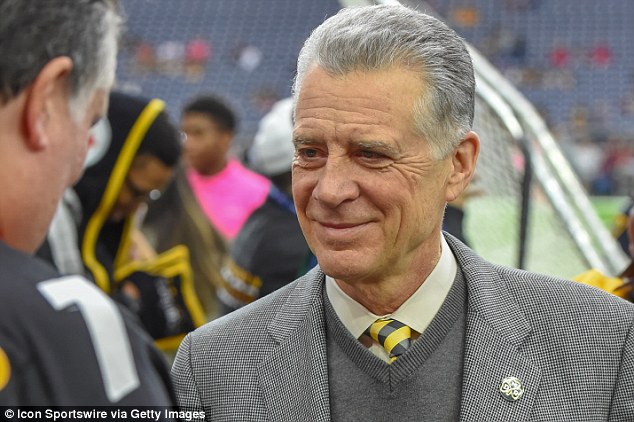 In May NFL commissioner Roger Goodell announced a new policy aimed at diffusing the issue. Players would no longer be required to be on the field during the anthem – a policy that was instituted in 2009 – but any team personnel on the field would be expected to stand. The policy would not punish protesting players directly, but teams could incur fines and would then have the option of penalizing the players individually.

Trump also criticized that policy because it allowed for players to remain in the locker room during the anthem, but the NFL has since announced that it was reconsidering the rule change.

In July the league announced that it was in discussions with the players association on ways to address the issue, adding that any rule changes would be temporarily put on hold as negotiations continued.

Mara was interviewed at an event celebrating the 25th season of NFL Sunday Ticket on DirectTV, where she was photographed with former Giants wide receiver Victor Cruz.

‘It reminds me of my childhood,’ she said of the NFL. ‘Going to a Giants game in New York with my family on a Sunday to me that is the normal way and the most comforting way because you’re surrounded by family, and love, and a lot of passion.’ 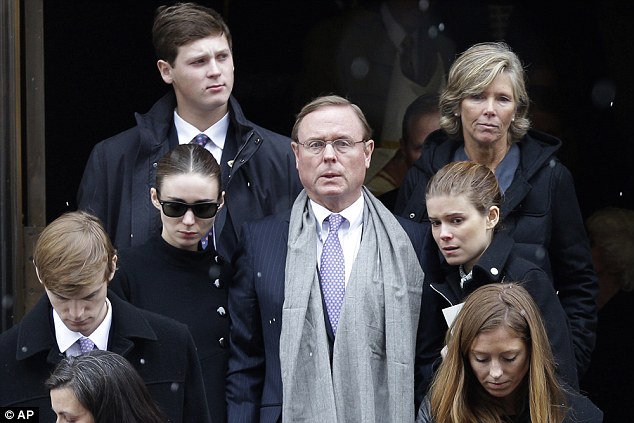 Chris Mara, center, with his daughters Rooney, left, and Kate leave the Church of St. Ignatius Loyola after the funeral mass for his mother Ann Mara, Friday, February 6, 2015, in New York