The trendy practice of acupuncture caused a 79-year-old woman’s lung to collapse, doctors have revealed.

The Portuguese woman, whose name has not been revealed, decided to have the ancient Chinese practice for her back pain.

But two days later, she was rushed to hospital with shortness of breath and sharp pains in her shoulder.

Doctors found part of her right lung had collapsed and they blamed the tiny needles used in acupuncture for her life-threatening complication.

Luckily she made a full recovery within days, but doctors have stressed that improper practice could lead to life-threatening problems.

A 79-year-old woman suffered a collapsed lung (see top left, circled) after having acupuncture for chronic back pain, doctors have revealed in BMJ Case Reports 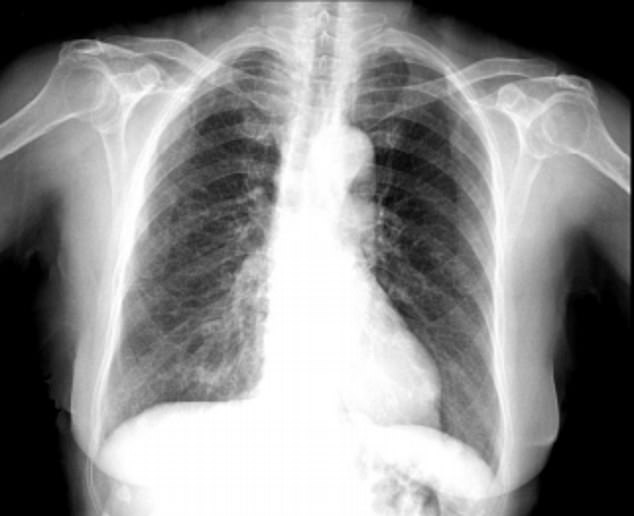 The woman was treated within three days at University Hospital Centre of Lisbon Central, Portugal (pictured, her recovered lung). Doctors have warned of the complications that might occur with the ancient Chinese form of complementary medicine

Acupuncture is a form of ancient complementary medicine that has been in Europe since approximately the 17th century.

The traditional view is energy, or ‘Qi’, flows through 12 channels, called meridians, in the body and if the flow is interrupted it can cause ill-health.

Inserting tiny needles and manipulating them at ‘trigger points’ restores the flow of energy and relieves pain, advocates say.

They also claim it may have beneficial benefits for the nervous system, circulation, hormones and muscle tone.

The 79-year-old woman’s story was told by doctors at University Hospital Centre of Lisbon Central.

They wrote in the BMJ Case Reports that the woman had a background of high blood pressure and osteoarticular disease, which affects the joints, muscles and bones.

It was her first time having acupuncture treatment to relieve her chronic upper back pain.

The NHS advises on its Choices website that acupuncture is safe when practiced with good hygiene by a qualified practitioner.

Some people experience mild, short-lived side effects such as:

If you have a bleeding disorder, such as haemophilia, or are taking anticoagulants, talk to your GP before you have acupuncture.

Acupuncture is also not usually advised if you have a metal allergy or an infection in the area where needles may be inserted.

According to the patient, after needling of the interscapular area, which is between the shoulder blades, she felt pain on the right.

She didn’t think her symptoms were abnormal, according to the doctors, and had not been warned of any potential complications.

Her pain did not resolve over the next two days and she was feeling more tired and short of breath – but could still speak in long sentences.

She consulted her GP who performed a chest radiography which quickly diagnosed a part of her right lung had collapsed.

A collapsed lung, medically called pneumothorax, is when air leaks from the lung into space in the chest.

The air pushes on to the lung causing it to collapse and struggle to expand. The most common cause is a blunt force to the chest.

The doctors said: ‘The depth, direction and angle of needle insertion, especially in the chest region, are crucial. The lung surface is about 10–20mm beneath the skin.’

At A&E, doctors, led by Dr Sofia Costa Corado, noticed the woman was calm despite having laboured breathing.

After supplying the woman with oxygen through her nose, a chest tube was inserted for two days to remove the excess air and help the lung expand.

On the third day, the woman was discharged with her lungs functioning normally.

The doctors said: ‘Both acupuncturists and clinicians need to be aware of the possibility of adverse events following acupuncture, especially in those who develop symptoms.’

Although the doctors said incidences such as this are rare, Dr Nick Hopkinson of the British Lung Foundation said there has been at least one fatality reported.

He added: ‘A recognised risk of acupuncture is that the needles can puncture the lining around the lung, causing it to collapse.

‘This can be life-threatening and we would advise people to avoid acupuncture to sites on the chest.

A German study on 229,300 people who received 2.2million acupuncture treatments found a rate of 8.6 per cent of adverse events.

Studies across Europe found that mild problems including pain and slight bleeding or blood clotting ranged from seven to 15 per cent.

Death, organ trauma or hospital admission, has been found to be 0024 per cent, the doctors wrote.