The scheme operated via fake banner advertisements that were secretly hidden behind legitimate banner ads in Android apps, according to BuzzFeed News.

Meanwhile, fraudsters rake in cash as their fake ads auto-play in the apps.

The ads aren’t actually seen by anyone, as they’re hid behind real ads, but the scammers still end up making money off of ad views.

Brands end up losing out on money because they purchase the ad spots thinking they’ll be placed as a normal ad in an app, only for it to be hidden out of view.

In total, the scheme is said to have led to the creation of 60 million fraudulent video ads per month, according to DoubleVerify.

Video advertising solutions company Aniview and its subsidiary OutStream Media were identified as being part of the scheme.

Aniview denied any involvement, saying its systems were ‘exploited’ by a bad actor, according to BuzzFeed. 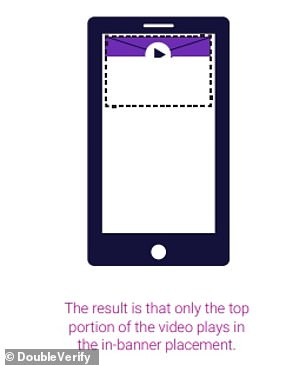 ‘BuzzFeed brought to our attention that there is an abuse activity, as an immediate action, we stopped this activity and started and continue an internal incident review,’ Aniview CEO Alon Carmel told the site.

‘…To be crystal clear, another customer on Aniview’s [self-serve] platform used this player and is responsible for this activity and we took actions immediately to stop this activity.

‘We are fighting against bad activities, pushing and focus on clean and legit activities and should not be blamed or framed for bad use of our platform,’ he added.

Protected Media claims Aniview is one of several other ad tech companies that have participated in these types of illegal ad schemes.

A report from DoubleVerify also breaks down exactly how the ad fraud scheme works.

‘Bad actors are seeking to maximize revenue and profits by stuffing multiple players into the ad slot, intentionally using incorrectly-sized players, and/or using hidden players – practices that are decidedly fraudulent,’ the firm explained.

This is just the latest example of this kind of ad fraud scheme.

The scam was detailed in a 13-count indictment that brought charges against eight people surrounding their involvement in a digital advertising fraud scheme referred to as ‘3ve’ and Methbot.

WHAT ARE 3VE AND METHBOT?

It involved scammers collecting false clicks on ad campaigns by linking them to false IP addresses.

The operation netted the scammers as much as $5 million a day.

Security vendor WhiteOps eventually shut the scheme down in 2016.

Similarly, 3ve was an ad fraud operation that distributed malware on millions of devices to generate fake clicks on ad campaigns.

It raked in an alleged $29 million.