Adam Henson thinks there should be a GCSE in farming

It was just after 4am and the sun hadn’t met the horizon when Adam Henson got out of bed to help a cow and her calf, who were making a huge hullabaloo right underneath his bedroom window.

‘The calf had got itself stuck on the wrong side of a fence and the mother was bellowing her head off. I definitely couldn’t have slept through it,’ he says, sounding secretly rather pleased to have been given a pre-dawn excuse to pull on his boots and get out to his livestock.

Henson, 52, is Britain’s most famous farmer, thanks to 17 years as a presenter of BBC One’s Countryfile. He loves sharing stories of the countryside and its people with the show’s eight million viewers, even if it does leave him with less time than he’d like for his own 1,600 Cotswold acres, called Bemborough Farm.

Adam Henson with his dachshund Mini, sheepdog Peg and two vizslas, Olive and Boo. Henson, 52, is Britain’s most famous farmer, thanks to 17 years as a presenter of BBC One’s Countryfile

Today he’s as likely to be found fronting a field-to-fork cookery show with Nigel Slater, or on the daytime TV sofa with Holly Willoughby as he is delivering a breech lamb. Indeed, Willoughby made him blush earlier this year by asking about his status as a rugged, rural sex symbol. ‘No, that’s rubbish. OK, the WI like me,’ he admits.

But his gift for bringing agriculture alive on the small screen isn’t luck, it’s a skill handed down from his dad, Joe Henson. ‘I think it is in my bones to perform,’ he says. ‘My father was the son of a chorus girl and the Forties superstar actor Lesley Henson. He always used to say he was the only man ever to have run away from the theatre to join a farm.’

Joe Henson died in 2015 and was given a proper shepherd’s funeral: his son cut a fistful of fleece from his finest Cotswold sheep and placed it in his dad’s hand before burying him in a coffin made from woven wool.

‘From being a little boy, Dad always told me a shepherd had to have a piece of wool in his hand when he arrived at the Pearly Gates so St Peter would know he’d been looking after his own flock, and that’s why he hadn’t been able to get to church on Sundays,’ he says.

Henson senior, however, was far more than a shepherd. He was a trailblazingly progressive farmer and rare-breeds specialist who was also a natural communicator, presenting programmes such as Animal Magic with Johnny Morris and In The Country alongside Angela Rippon and Phil Drabble. This star quality is what the BBC spotted when Henson emerged victorious from 3,500 hopefuls auditioning to become a Countryfile presenter in 2001.

He’d only applied because Bemborough had been taken to the edge of financial ruin by the foot-and-mouth epidemic. He survived the show’s 2009 leap from Sunday lunchtime to prime time, and since then his media career has ripened faster than a wheat field in July. 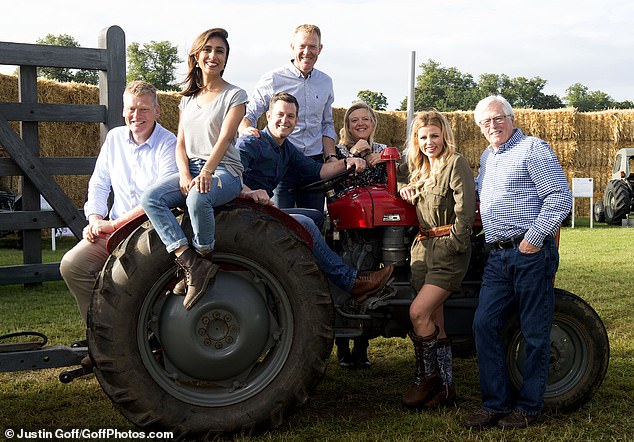 Henson (centre) with the Countryfile team. Henson says the show enables his own voice to be heard on issues that matter most to him 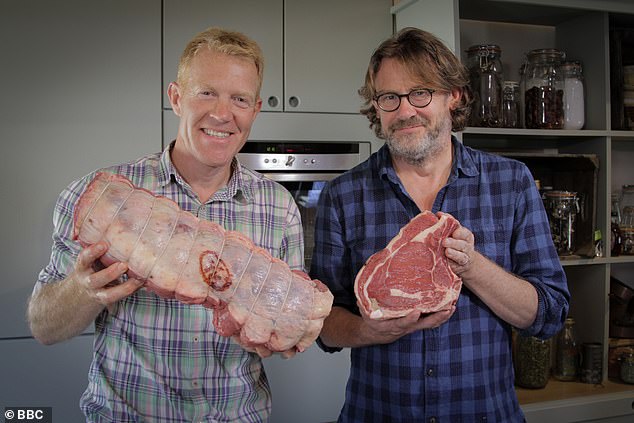 Today Henson is as likely to be found fronting a field-to-fork cookery show with Nigel Slater (pictured), or on the daytime TV sofa with Holly Willoughby as he is delivering a breech lamb

Asked how much time his broadcasting and writing – his third book, A Farmer And His Dog, has just been published in paperback – leaves him with for farming he says, ‘Very little now.’ (Which is why he didn’t mind getting up to care for his cow).

It also means he is acutely aware of his public image even when he is at Bemborough. ‘I have lots of local mates from when I played rugby for Stow-on-the-Wold. If we’re all in a pub letting our hair down, I have to be careful – I can’t be crass or coarse because there might be an older couple in the corner who are Countryfile fans and might think the worse of me.’

To him this is a small sacrifice to make to be part of the cult TV show credited with connecting agricultural industry to an increasingly urbanised society. Plus it enables his own voice to be heard on issues that matter most to him, such as food provenance and educating city youngsters about agriculture.

‘“Concrete children” do exist, those who have never seen sheep and don’t know milk comes from a cow,’ says Henson. ‘They simply don’t equate food with animals. That’s partly the fault of the agricultural industry because we haven’t communicated it well enough in the past. In the Eighties, we simply put our food in a lorry and took the money.

‘Today’s farmers are better and I think we, as a society, are much more liberal about blood and gore and death. People are going to butchers’ and farm shops and talking to producers about food. But I do think it is time Britain had a GCSE in farming, to teach children how to make informed choices. They need to know if something they are hearing about animal welfare, for example, is fake news.’

It’s clear he’s not buying the ‘all meat is bad’ message of veganism then. ‘As you’d expect, I love a roast,’ he says. ‘Particularly duck.’ 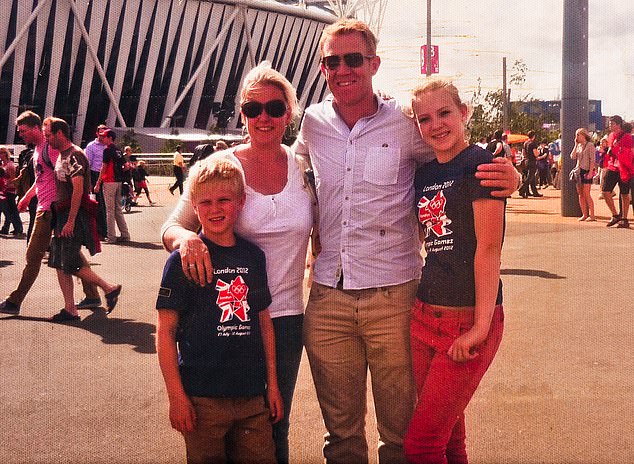 Henson with his partner, Charlie, and children Alfie and Ella. For his son and daughter, Henson has tried to replicate the kind of childhood his father gave him

He still does a bit of hedgerow potshotting for rabbits and pigeons – his children are used to seeing them hanging up in the pantry and being prepared for the dinner table. He also attends the occasional organised shoot on a local farm. ‘I don’t particularly enjoy eating my own animals,’ he says, ‘but I do like knowing where my food has come from.’

His children are Ella, 20, and Alfie, 16. Henson has been with his partner Charlie, whom he first dated at school, since the Nineties, but they have never married. ‘Never felt the need,’ he says.

For his son and daughter, Henson has tried to replicate the kind of childhood his father gave him, one punctuated by the changing seasons, where there was always time to watch a buzzard hitching a ride on some warm air thermals or spot a leveret hiding in its shallow nest, known as a scrape.

He was, he likes to say, ‘nurtured by nature’ and inculcated by his father about the necessity for rare breeds. At the age of five, Henson Sr. gave him control of three Exmoor foals and told him to ensure their bloodline continued. ‘Dad believed rare breeds were part of our living heritage. He called them antiques on four legs, but what he really stressed is that they were a genetic resource for the future of agriculture. There was opposition at the time, but he was proved right. I think that was the thespian in him, it gave him a really outgoing, can-do attitude.’

Dad was the son of a chorus girl and an actor. It is in my bones to perform

It’s the same characteristic that makes Henson enduringly popular on Countryfile. Fulfilling his childhood dream of being a cowboy by rounding up cattle on horseback in Australia or sitting soaked to his underpants by a gale on the hunt for the most remote bothy – a workers’ shelter – in Britain, he’s equally enthusiastic about his job. Even royalty doesn’t faze him.

Recently he took TV cameras, for the first time ever, into the old, ornate creamery at Windsor Castle. ‘We were only allowed in with the Queen’s permission and the name before mine in the visitors’ book was Prince Charles. He has to get agreement from his mum too. I love the fact that the Queen comes out to watch her own land being harvested and check on her yields – she’s just the same as me and my arable manager.’

Speaking of which, Henson must now hurry back to his farm for a couple of days working the fields before he’s off filming again. His sheepdog, Peg, slinks away at his heels, while his two red-gold vizslas, Olive and Boo, race ahead. Behind him follows his latest acquisition, a coarse-haired dachshund called Mini. ‘I’ve wanted one for ages – they’re so cute. But please don’t tell anyone!’ Sorry, Adam Henson, TV star, very modern farmer and now proud owner of an on-trend sausage dog – you’re busted.

‘A Farmer And His Dog’ by Adam Henson is out now in paperback, published by BBC books, priced £8.99